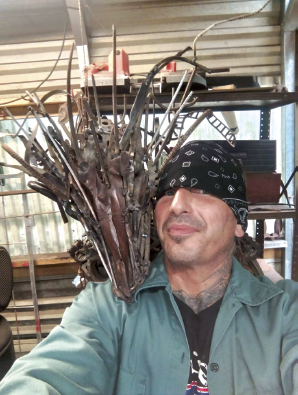 Brooks Wilson creates all types of metal sculptures at his place of business: Blood, Sweat & Gears. 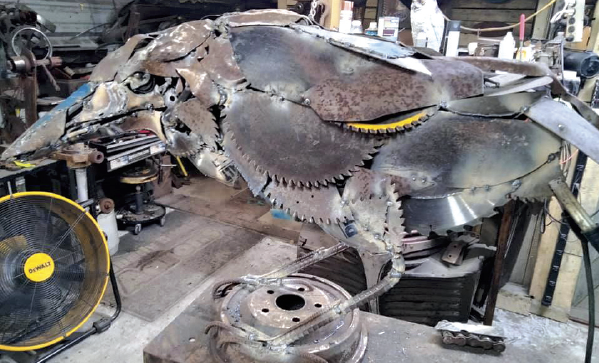 While Wilson creates all types of metal sculptures, many requests are "for the birds."

Brooks Wilson creates all types of metal sculptures at his place of business: Blood, Sweat & Gears.

While Wilson creates all types of metal sculptures, many requests are "for the birds."

You’ve probably heard the adage many times, but for Brooks Wilson, one man’s trash definitely is another man’s treasure: Wilson’s treasures. This is especially so as he is into heavy metal; no, not like Metallica or AC/DC — but as in artwork, which is what Wilson does at his studio and business, Blood, Sweat & Gears.

His journey began when he took his kids on a hike one day near the Bartow Air Base and came across what looked like discarded fuel pumps and other parts. He collected them and took brought them home. At first he was going to recycle the items, but after having a self-described “weird kind of brain,” he decided otherwise.

“I just made a cool piece of art out of it,” he said. It was a Catholic-style Sacred Heart piece that’s associated with Jesus Christ.

That’s when he was bitten by the metal-artistry bug.

“I enjoyed doing it,” said Wilson, a Winter Haven resident since 2001. “The more I do it, the more I really, really enjoy it.”

With some of his friends owning junkyards and machine shops, he’ll peruse the grounds with some coffee and some saws, looking for materials.

“If something speaks to me, I’ll cut it off, bring it home and I’ll build some artwork out of it,” Wilson said.

He prefers working with farm-type metals because they possess “a little more character.”

A lot of his artwork designs comes from commissions as clients will ask for particular sculptures.

One of the more popular sculptures he does is tropical birds, as they have been very profitable.

He can make them as tall as 6 feet and can get hundreds of dollars for them, although sales are negotiable, he said. He’ll even deliver them to the client.

Brian McBride is the managing editor of the Winter Haven Sun and Four Corners News Sun, sister publications of the Clermont News Leader.