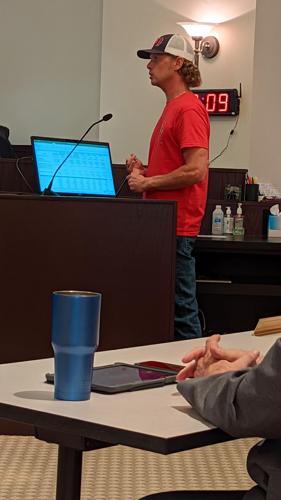 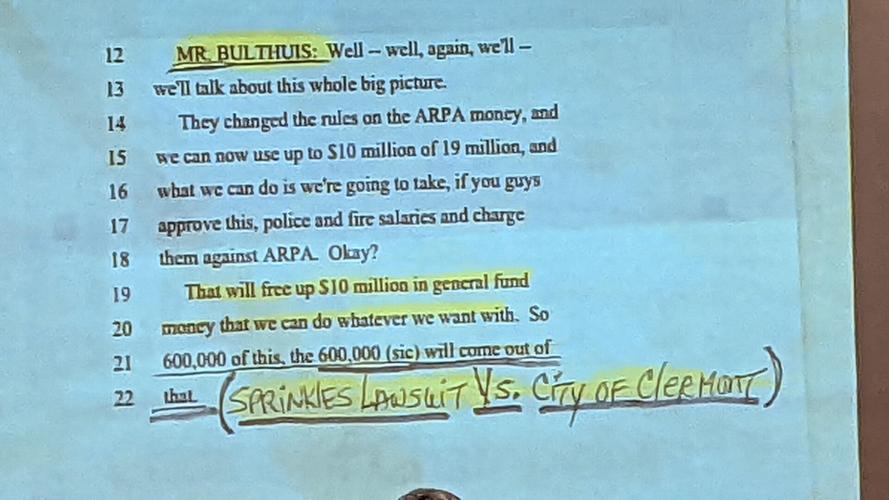 ARPA grant money is a fund intended to provide support to local governments in order to facilitate the ongoing recovery from the COVID-19 pandemic.

ARPA grant money is a fund intended to provide support to local governments in order to facilitate the ongoing recovery from the COVID-19 pandemic.

It isn’t as high as 5.5 as Clermont city council members indicated they would support at the first hearing held on Sept. 7, regarding the proposed millage rate and Fiscal Year 2022-2023 budget. Nor was it 4.2061, which had been the millage rate for the past seven years.

In the end city council members rollbacked the millage rate to 5.06 in a 4-1 vote, with Ebo Entsuah the lone vote against.

“I’m still tepid on that number. I don’t know if I can vote for that right now,” he said, referring to the 5.06 rate that appeared to gather support among his peers as the evening progressed and everyone in the audience who opted to speak had done so. He expressed his support for the 4.2061 millage rate.

Regardless whether those in the audience spoke, be it pro or con, the mood overall was polite, yet contentious with a few exceptions.

The entire process has been a difficult one, stated City Manager Brian Bulthuis, and at times had exceeded common courtesies.

“People are starting to get personal and it’s getting frustrating,” Bulthuis said, as at the invitation of Mayor Tim Murry, to lay the groundwork about all that had preceded the Sept. 20 second hearing.

Clermont has been operating in the red for a number of years, and much of it was laid at the feet of prior administrations and previous city managers, who had treated the city’s budget as a slush fund.

This is what both Bulthuis and current city council members had “inherited,” which Bulthuis would later state that he had been “... drinking from a fire hose, not a garden hose.”

The bottom line, Bulthuis concluded with, which was the position he had been advocating, was it made no sense to stick with the current millage rate.

“Four point 2 is not a sustainable millage rate,” he said. He then concluded what he had instructed city council members when he was interviewed for the position. “I’m a sharpshooter. I’m going to tell it like it is, whether you like it or not.” He then offered an apology if anyone ever felt offended by his approach.

This was unacceptable to Charlotte Harrison Ford, who has harangued city council members, as well as the Clermont Police Department in the past. At the Sept. 20 meeting, she went after the city manager, who had mentioned her by name earlier in the evening regarding a multitude of requests she had made for documentation over the past several weeks including up to this past Tuesday.

Ford chastised and rebuked Bulthuis, stating that he had violated Florida law in an effort to humiliate her, and that Florida is different from Georgia, where Bulthuis had been a city manager before retiring and then unretiring to become Clermont city manager.

“You’re not in Kansas anymore, Dorothy,” said Ford. She also made a comment regarding the brick pavers that grace downtown Clermont streets, making a reference to “...where the sun don’t shine.”

Those last two statements brought about laughs from the audience as well as from Bulthuis and city council.

When the floor was opened for public comment, the first three people who addressed city council spoke in favor of the 5.5 millage rate, and touted the benefits that would be derived. According to Tom Bennett, who was the first to speak and has been a long-term member of the Clermont Fire Department, through their efforts, the fire department had saved the city $512 million fighting fires, as well as having revived 27 people who had first been pronounced dead, giving them a fighting chance at survival.

With that, applause rang out and Murry asked the audience to refrain from further applause, party because it might prove intimidating to others wishing to speak. For the most part the audience did refrain from applauding, although it still burst into clapping following several speakers, which prompted Murry to reiterate his request.

Following the last outburst, however, Murray explained that if it happened one more time then he would exercise his authority and end public comment. No more applause occurred.

However, until the end of the public forum, the majority of people approaching the podium were against increasing the millage rate to 5.5. At the same time a segment of speakers spoke on the matter of the Arts and Recreation Center. According to unconfirmed sources, rumors have been circulating that the city was going to sell off the facility.

One of those speaking in favor of the arts and recreation center was Joanne Meyerhoff. Raise the impact fees on developers, she urged. It was a sentiment others would also express, with one going so far as to state that developers had raped Clermont rather than support it.

Murry later would inform the audience that the city indeed was researching the matter, and that in at least one instance a previous administration had entirely waived an impact fee. However, admonished Murry, it was mandatory to do such in the manner dictated by state law.

Among those who opted to address council was Anthony C. Grove, who read from a prepared speech. In a calm and measured tone, he debated various statements that have been made in support of rolling back the millage rate.

“It takes absolutely no skill to ask for more tax money. It takes real skill to go through a $41million budget and find creative solutions. You might have to work evenings and weekends, but that is more work than simply asking for more money,” Groves said. A short while later he made a proposal, but with a caveat. “I am offering my services to the City — at no cost — to explore opportunities within the current revenue stream. I will protect the pocketbooks of the citizens if you will not.”

Grove would later explain he has had a career in finance and healthcare for nearly 40 years (38 years, to be exact).

Once everyone who wished to speak had, Councilor Jim Purvis was first to comment. He was annoyed at some of the comments that had been made, and pointed to one in particular, in which the person who had spoken then almost immediately left the building.

“It’s aggravating watching something like that happen,” said Purvis.

Leading off discussion was Councilor Tim Bates. Although he had originally intended to support the millage rate being rolled back to 5.5, after listening to the audience, he had a change of heart. He then proposed the millage rate be rolled back to 5.06. This would lead to a shortfall of only $19,201.03, and he was confident the city could find the funds to cover that, although he was emphatic in not wanting to touch general fund reserves.

Purvis responded by stating that at first he was adamant that he was going to “stick to his guns” and support the 5.5 millage rate proposed, but then admitted he, too, had softened his position.

“The city needs the funds. Period. If we can find the money at 5.06, I am willing to support that,” he said.

Other than Councilor Ebo Entsuah, who was not in favor in any rollback, both Council Michele Pines and the mayor expressed support for the proposed 5.06 millage rate.

Murray also made several final statements before calling for a vote, one in particular.

“I don’t want to have to raise taxes,” he said, as it also affects him. He then offered an explanation of a recent bite being taken out of his pension from having served in the military.

Do I want to raise taxes? No. I’m already in the hole.”

Following adjournment, Grove was asked whether the 5.06 millage rate was acceptable. It wasn’t, but at least it wasn’t 5.5, and he credited the residents who in addition to himself had spoken. It made the difference, he said.

One person not pleased was Kris Kruse, a union spokesman for Clermont Police Officers and Sergeants Union. His concern regarded the two proposed police officer positions that would have been created had the 5.5 millage rate been accepted. Now he wondered whether the 5.06 millage rate might allow for just one new officer. He doubted that it would.

Allison Strange, who had spoken at both hearings, and who with her husband own two residential properties and one commercial property, was clearly displeased.