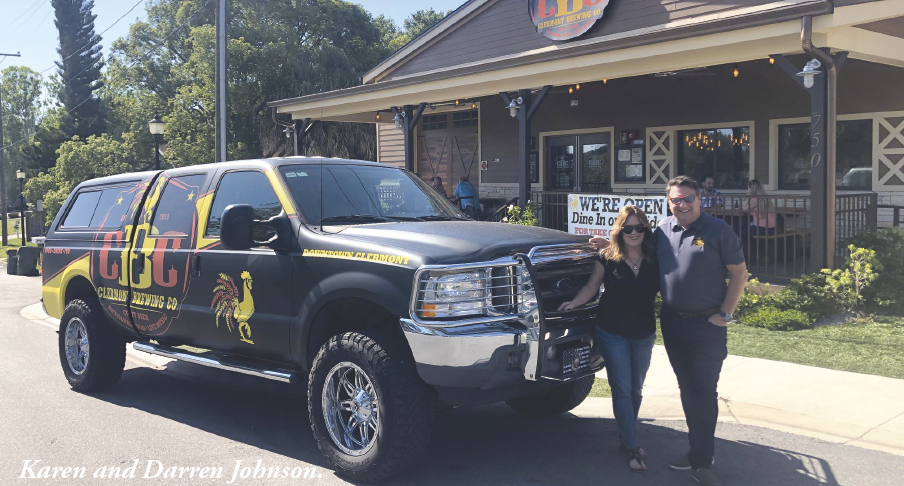 Darren Johnson’s initial idea for the property at 750 W. Desoto, in downtown Clermont, was to retrofit the old feed and tackle store into a beautiful event venue. Johnson, a corporate event planner (now on temporary hiatus due to COVID-19) had it all mapped out, but when he learned the building was not structurally sound, he thought he would have to sell the property. However, a friend provided the concept for a brewing company, and Johnson decided to go with that idea. To do that, he had to tear down the old building and establish a craft beer brewery. During construction in 2018, the dream morphed again, and Johnson along with his wife, Karen, decided to include a full menu and live music. When the Clermont Brewing Company opened its doors in June 2019, it was a 7,600-square-foot restaurant and brewhouse with a large covered porch, backyard biergarten, putting green and full liquor bar.

Then, after only nine months, the pandemic caused a temporary shutdown for CBC. However, after two months, the venue was able to come back into full operation.

“Since May 2020, business has improved steadily month over month,” Johnson said.

To accommodate guests and keep staff healthy, they moved tables apart and moved most activities outside onto the large porch and into the backyard. Two-thirds of the tables are now outside. In addition, CBC employees are tested for COVID-19 onsite every two weeks, and tables and menus are sterilized daily.

Darren and his wife have lived in Clermont for 28 years. As a member of South Lake Chamber of Commerce, Johnson offered up the space for chamber breakfast meetings on the last Friday of every month. CBC has also become the meeting place for the Clermont Downtown Partnership.

The joint is hopping (pun intended) seven nights per week. Fridays and Saturdays feature dance bands, Thursday is country night, Tuesday is trivia night and Wednesdays feature “Wingo Bingo.” Upcoming special events include a Cinco De Mayo celebration on May 5 and a Fourth of July celebration. CBC also is a popular place for family events, graduations, Quinceañeras, wakes and weddings, according to Johnson.

The Johnsons are also co-owners of Darren W Johnson Productions, Inc., an event management and production company specializing in event planning for corporate and special community events. They also co-own The Southern on 8th restaurant with executive chef Richard Formato and his wife, Michelle. Just around the corner from Clermont Brewing Company, at 801 W. Montrose Street, The Southern on 8th opened in December 2020.

Future aspirations of the Johnsons include the Woodhouse Day Spa on West Avenue between Osceola and Minnehaha, and the Village Marketplace on South Lake Trail. Both are to start construction this summer in anticipation of opening during the first quarter of 2022.

You can find the Clermont Brewing Company at 750 W. Desoto Street in downtown Clermont and online at www.clermontbrewingcompany.com.