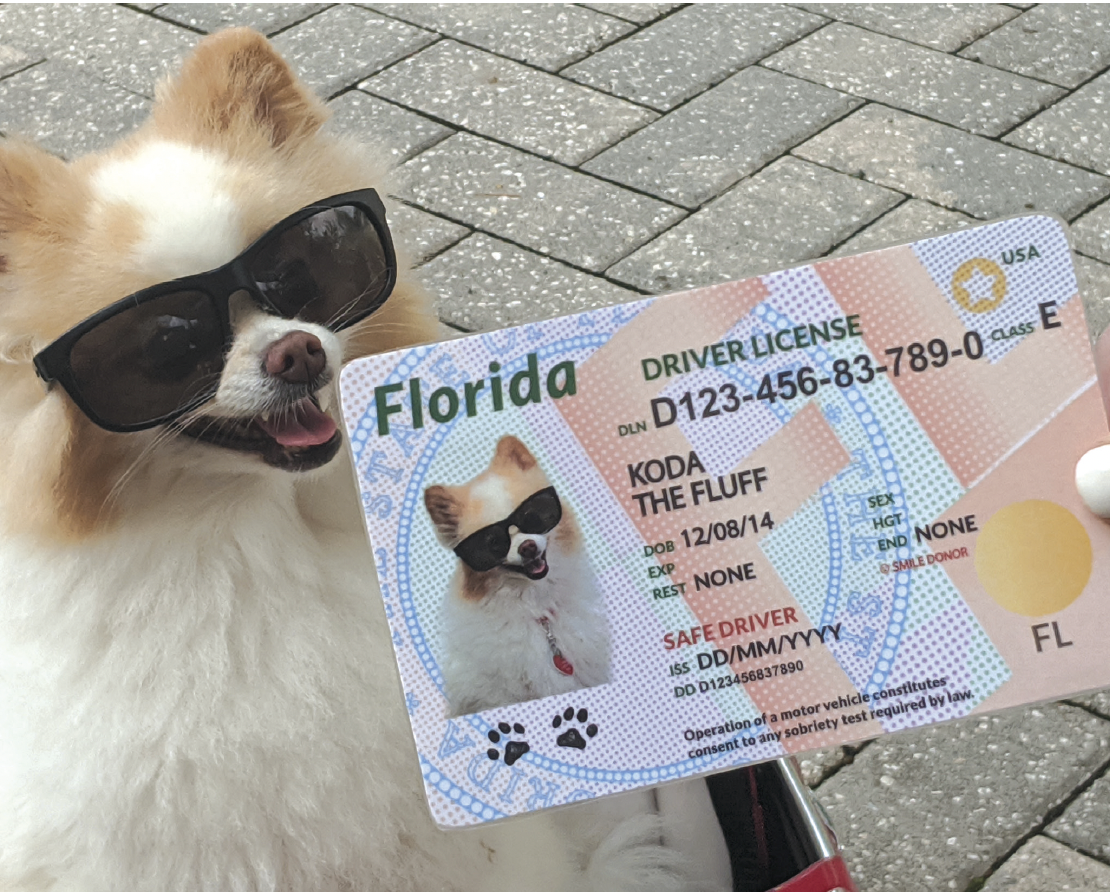 Koda the Fluff is all smiles as she receives her Florida driver’s license. 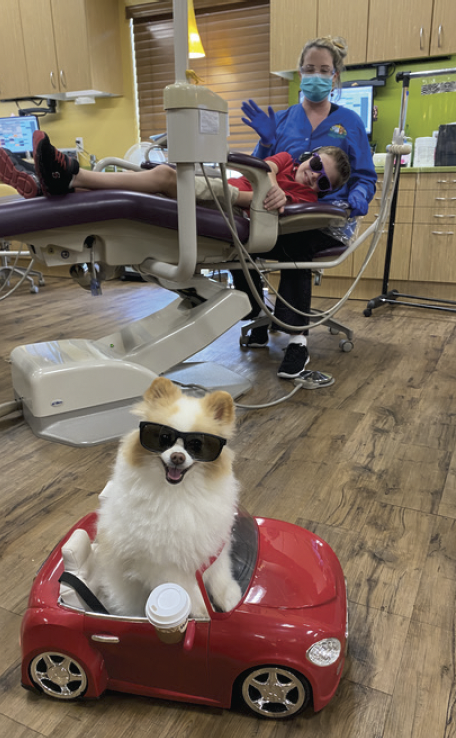 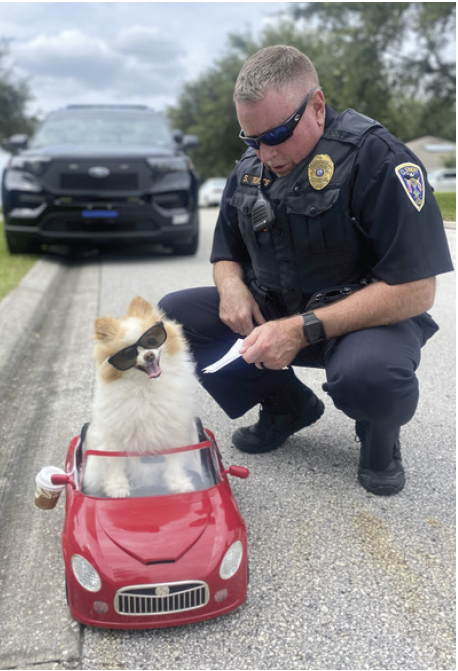 In one of the first videos made in conjunction with the Clermont Police Department, Koda the Fluff gets pulled over by Officer Scott Tufts, where it is learned Koda lacks a Florida driver’s license. 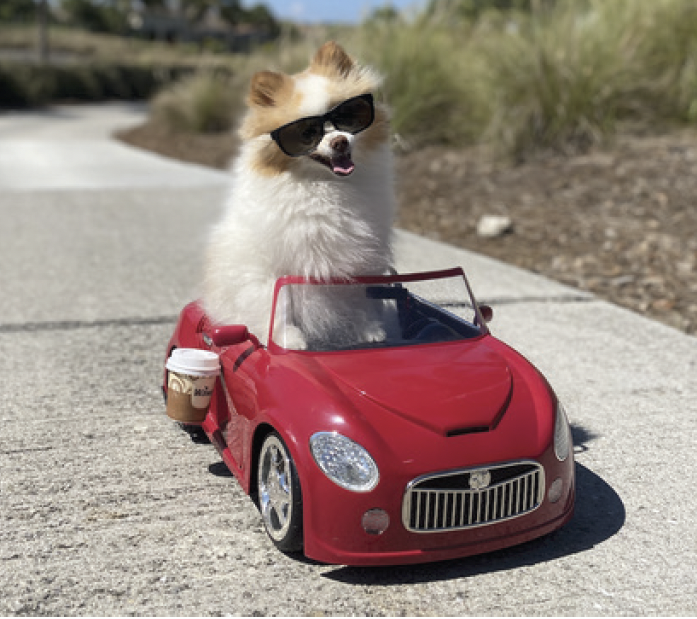 Koda the Fluff is all smiles as she receives her Florida driver’s license.

In one of the first videos made in conjunction with the Clermont Police Department, Koda the Fluff gets pulled over by Officer Scott Tufts, where it is learned Koda lacks a Florida driver’s license.

*But were afraid to ask (NOT!)

She may not be an internet sensation — at least not yet — but Koda the Fluff has gained a following with her video appearances on Facebook, many of these in conjunction with the Clermont Police.

But regardless the venue, be it video or in person, a flurry of excitement erupts wherever she shows up.

Most recently, she appeared at the Oct. 5 National Night Out event held at Clermont’s Waterfront Park. A crowd of people came rushing up to see her and say hello, in addition to asking her “fur-free mother” Jena McKinstry questions about Koda. A few people inquired whether Koda actually drives her car, a convertible equipped with cup holder and a radio that plays hit songs primarily from the 1960s-70s.

As to be expected, Koda drank in all the attention being paid her in stride as she sat behind the wheel of her convertible. And when she put “paw-tel” to the metal, the oohs and aahs, plus the smiles of people’s faces, made for several exciting moments.

But all of this adoration almost never happened.

“When I got her, I didn’t plan to do anything like this,” said McKinstry. After all, McKinstry was always doing fun things with and for her Pomeranian. “I was always dressing her up, putting her in outfits.”

It was at an American Girl store that McKinstry came upon the convertible and Koda instantly took a liking to sitting behind the wheel as McKinstry operated the vehicle via remote control.

However, it was the suggestion of a friend who suggested McKinstry consider training Koda to be a therapy dog. It was an idea McKinstry, who handles marketing for Tommy’s Boats, immediately seized.

“I thought it would be cute to do it in the hospital,” she said. However, becoming a therapy dog was a slow process. It took about a year filling out paperwork and other collateral material in order to get Koda the Fluff credentialed. McKinstry likened it to having to jump through multiple hoops. But in the end it has been well worth the effort and Koda is now part of Alliance Therapy Dogs

Soon, Koda was making appearances at area hospitals, cheering up staff and patients and visitors alike. That led to appearances elsewhere, such as dental clinics and other medical practices as word about Koda spread.

Then McKinstry came up with a proposal that has resulted in Koda the Fluff’s ascent on the internet. Thus began the start of a series of videos traffic and vehicular safety and related law enforcement issues. She added the idea of doing a series came about following conversations with Clermont Police Chief Charles Broadway and other law enforcement principles from the other municipalities, including the Lake County Sheriff’s Office. After (yes, pun intended) being given the “green light,” the first video to go up was on the Clermont Police Department’s Facebook page.

In it, CPD Office Scott Tufts pulls over Koda as she is driving. In the process it is discovered Koda lacks a driver’s license. She is instructed where to apply for her driver’s license, which she does.

In another video Koda pulls into the parking lot of an ice cream stand. However, she breaks the law by deliberately parking in a handicap zone. As a consequence, her car is towed. Koda learns a lesson — an expensive one, at that — why it is important to obey vehicle laws.

These and other videos now up on the internet are professionally filmed. During the process, McKinstry (and sometimes others) will come up with an idea and try to make it happen.

There are a couple of reasons for this project, she said.

“We want to educate people,” said McKinstry, citing one reason, then elaborating on another aspect. “Another part of it is humanizing the badge.” Which is why those in law enforcement, first responders, firefighters and others who participated at the recent National Night Out also had the same reaction as did the general public. “They get just as excited when they see her.”

WHERE TO FROM HERE

Without a doubt, Koda loves people just as much as people love her. This is particularly demonstrated when McKinstry does one thing in particular.

“Every time I get the car out, she gets excited,” McKinstry said. It is as though Koda knows the impact her presence is going to make and cannot wait to get started.

There is no charge to schedule an appearance by Koda the Fluff, according to McKinstry. All a person need do is go to  Koda the Fluff’s Facebook page, or website: www.kodathefluff.com