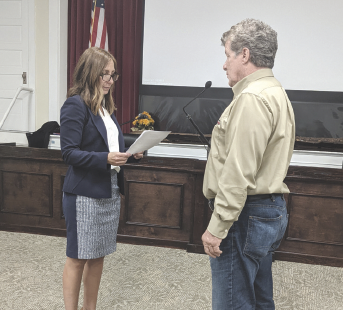 Montverde Town Attorney Anita Geraci-Carver administers the oath of office to Joe Wynkoop, who will continue serving as mayor. 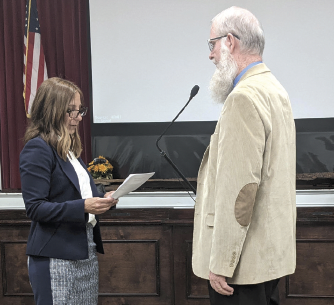 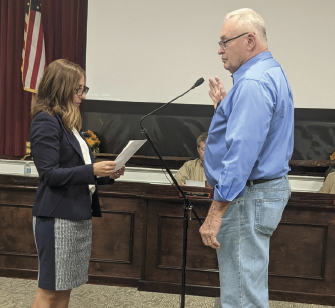 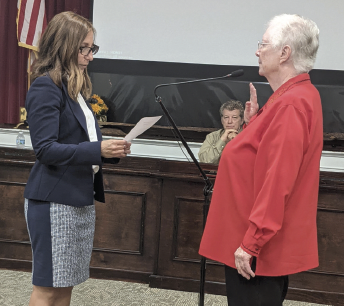 Montverde Town Attorney Anita Geraci-Carver administers the oath of office to Joe Wynkoop, who will continue serving as mayor.

Turnout was decent at the first Montverde Town Council meeting of Nov.9, following the Nov. 2 general election, with all those who ran for re-election returned to office.

Following the swearing-in and subsequent seat assignments, comments were of a positive nature, especially the news from Town Manager Paul Larino that Montverde will be the recipient of a grant in the amount of $850,000 for arbor projects.

Also of a positive note were comments regarding the recently-held 41st Annual Montverde Days Festival. While Larino thanked all city employees for their hard work, in turn, he — and his wife — were lauded by Hartle, who specifically cited the work the couple put in, especially the opening day, Friday, Nov. 5, in which it rained heavily practically the entire day.

Comments made later during the session came from both Ley and Hartle.

Ley praised this year’s Trunk or Treat event. This year there were more than 40 participants who gave out candy to several hundred children.

For his part, in advance of Thanksgiving, Hartle ticked off a list of things for which he was grateful. One of these was what he learned as he went door to door campaigning. People, he said, were thankful for the direction town leaders were taking, as gave an example.

He directed another comment to those attending the Nov. 9 meeting.

“I’m thankful you people show up on a regular basis,” said Hartle. “It’s an honor to serve you.”

Larino brought attention to the upcoming Florida League of Cities event scheduled from 1-4:30 p.m., Nov. 19 in Mount Dora. The day would include a golf tournament and dinner would consist of BBQ. He needed to know which councilors planned or were contemplating attending.

During administrative matters, Larino suggested that because of his background that the mayor, Joe Wynkoop should represent the town as its appointed member to the Central Florida Metropolitan Planning Organization Alliance, to which Wynkoop agreed to serve.

Town Attorney Geraci-Carver raised the fact that Montverde Academy was challenging the town’s water impact fee. One reason for doing so, she told councilors is that the academy believes the cost is inaccurate. The other reason is the belief the impact fee breeches Florida statute. She further informed councilors and others she would get copies of the motion to them, and she counseled them on what to say if approached.

“Do not say anything,” she said.

A discussion arose following a presentation by Town Planner Sean Parks (who also happens to be Lake County Commission chairperson). In his capacity as town planner the issue of expediting bicycle lanes on County Road 455 was of issue — expanding additions on both sides of the road. It was also an issue of funding and where the money would possibly be coming from.

“We are going to apply for safety grant dollars,” Parks told councilors.

While on the topic of bicycle lanes, Wynkoop segued into his wanting Montverde to be exempt from any bicycling events. In that regard, several of the other councilors pushed back, starting with Jim Ley.

“We’re still going to have cyclists using the lanes,” he said.

“But not hundreds of them,” Wynkoop said in response.

Parker then explained how the process works from the county side. The event permitting process is lengthy and applications have to be submitted at least 90 days in advance of the planned event.

Wynkoop turned to the town attorney for advice on how to go about preventing any bicycling event to go through Montverde.

“You might want to do it on a case by case basis, rather than a blanket statement,” she said.