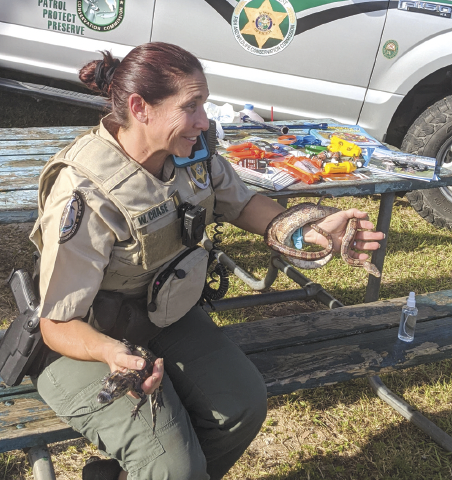 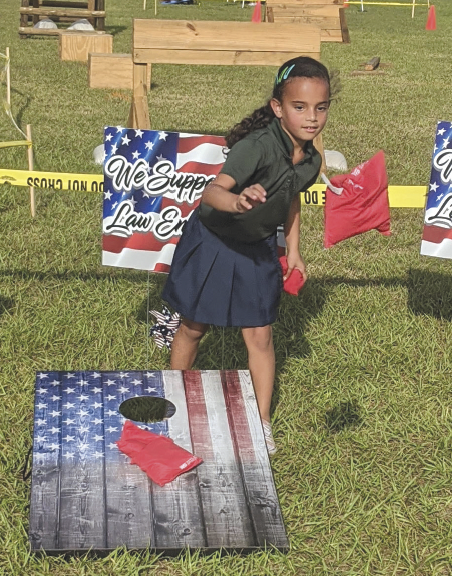 Mia Nikcevic, 6, tosses a bean bag toward a cornhole board at the Oct. 5 National Night Out celebration.

Mia Nikcevic, 6, tosses a bean bag toward a cornhole board at the Oct. 5 National Night Out celebration.

Turnout for this year’s National Night Out was extensive, not only from the various police departments throughout Lake County, as well as other related agencies such as the fire department, Fish and Wildlife, and other vendors, but from the public itself.

The event was a presentation by the Clermont Police Department and the City of Clermont.

Events and attractions were numerous. Among the more unique sightings and activities included those dressed as London Bobbys (its term for police), who paraded about in stilts, a baby alligator and corn snake, an obstacle course for people — primarily young children — to test themselves, and other attractions.

From the city’s viewpoint, the event was a success by all measures.

“It was a great turnout,” said Jennifer Clutts, public information officer with the City of Clermont. “It was an awesome event.” It was also a return to the event, which, like so many other happenings, did not take place the year before because of COVID-19. “It was nice to bring it back, and nice to welcome back the community.”

One of those returning was Raul Cruz, of Clermont, who has attended every year for the past several years. He used to go to the one in Mount Dora, but now stays in Clermont since the event left a good impression on him the first year he attended. Cruz wants to build up the community and its support of the police department.

“Just because a few bad ones get publicity, doesn’t mean we won’t support them. Of course, we’re out to support the officers,” Cruz said; recently, a now-terminated Clermont Police Department officer was arrested, having embezzled CPD funds.

Cruz’ comments go along with the purpose of National Night Out.

Bonding and strengthening community ties were the themes of the night. While the Clermont Police Department’s description of the event speaks to National Night Out being a community-building campaign promoting partnerships between community and police and making neighborhoods safer — all excellent goals — Clermont Mayor Tim Murry believes it is the personal interaction, one-on-one citizens talking to public servants that makes the night truly special.

“It’s an outstanding night for the community, a period of bonding and development of trust with law enforcement,” Murry said. “During these trying times, it is a night we come out and enjoy being together.”

Lisa Hardie, of Minneola, concurred, She spoke of the importance of starting the positive exposure to law enforcement at an early age, and referenced her daughters, Onna and Ava.

“My girls love to talk to police officers,” Hardie said. “They need that positive interaction at their age.”

“This is how we build community,” said Parks. “Not on Tik Tok, Facebook, or watching the news, but coming out and meeting those who put their lives ahead of our own.”

ABOUT NATIONAL NIGHT OUT

National Night Out was founded in 1984 and is designed to educate the public on crime prevention; generate support and participation in local anti-crime programs; and create strong bonds, as well as foster partnerships between the community and local law enforcement by shining a spotlight on community police programs.

The event in Clermont also was the opportunity to showcase other agencies, including the fire department, First Responders, Fish and Wildlife Commission, and related health organizations, as well as other organizations that provide youth and adults organizations and activities that build strong communities.

Managing Editor Steve Steiner contributed to this article. He may be reached at: ssteiner@clermontnewsleader.com