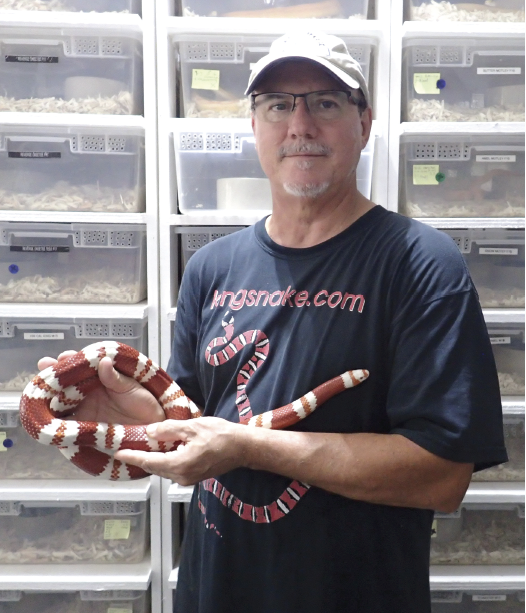 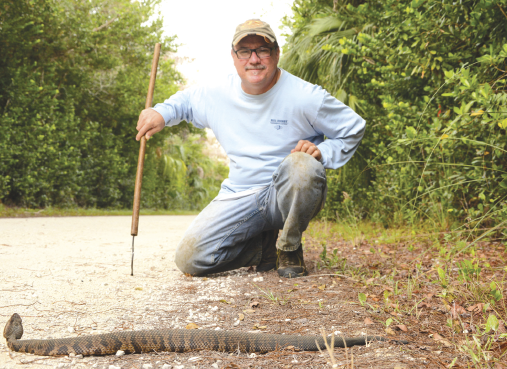 Mike Falcon encountered this cottonmouth water moccasin while in the Big Cypress Preserve in South Florida, which he then escorted safely off the road.

Mike Falcon encountered this cottonmouth water moccasin while in the Big Cypress Preserve in South Florida, which he then escorted safely off the road.

For self-taught herpetologist Mike Falcon, snakes are much more than meets the eye. While others see snakes as dangerous animals to steer clear from, Falcon enjoys caring and raising them.

Since grade school, Falcon has been fascinated by snakes. While working in pet shops and collaborating with reptile distributors, Flacon gathered all the information and lessons he needed to start raising his own snakes.

Since the 1980s, he’s been breeding and raising snakes, but ever since he retired as a technical support customer service manager for CenturyLink, his hobby has turned into a full-time job. With a couple of hundred snakes currently in his breeding collection, and in the middle of baby season, Falcon is extremely busy.

“It takes a lot of time, it’s kind of like a second job,” Falcon said.

From Corn Snakes to King Snakes and Ball Pythons, Falcon breeds and raises them to sell to distributors and pet wholesalers throughout Florida and the rest of the United States. He’s even sold snakes as far as California.

Although he recommends Corn Snakes for beginners, Falcon’s favorite is the Honduran Milk Snake. This non-venomous snake can grow up to five feet, and is native to Honduras, Nicaragua and northeastern Costa Rica. For years, Falcon has perfected breeding various morphs and has created a special, one-of-a-kind variant of the snake.

“That was really one of my accomplishments. They’re really big, beautiful milk snakes with really vibrant colors. They’ve always been one of my favorites,” Falcon said.

But for Falcon, it’s not just about breeding them. He also cares for more education and the conservation of these slithery creatures. Through various Facebook forums, Falcon identifies and educates people on snake groups. He even highlighted Clermont’s specific problem with snakes.

“A lot of wild snakes around Clermont...the housing developments are destroying their natural habitats. If you see a snake in your yard, just identify it and let it back in its natural environment,” Falcon said. “I know there’s venomous snakes, but just be careful. Usually they’re just passing through. More people get bit by venomous snakes by trying to catch them. It’s just better to keep your distance, have caution and just observe them.”

Falcon’s wife has also helped with spreading his message. She works for Lake County Schools and has given Falcon a platform to educate children on snakes and their conservation. He’s given speeches at Sawgrass Elementary school as well as Lost Lake Elementary School.

Although some may argue that breeding snakes is not helpful to the species, Falcon disagrees with skeptics.

“I like to breed baby snakes and they end up in pet shops. But I think it helps the natural occurring snakes, because people don’t have to collect snakes from the wild. I wish Florida would pass more laws protecting wildlife, including snakes. It’s still legal to collect them and kill them in some areas,” Falcon said.

Although snakes like corn snakes and ball pythons are not in threat of endangerment, their biggest threat is habitat loss and illegal pet trading. Falcon puts a stop to all that by speaking out through forms and raising them responsibly.

“Snakes are not the evil creatures they’ve been made out to be,” Falcon said. “They definitely have a place in the natural habitat here in Florida, and that needs to be respected. There’s no need to kill them unnecessarily.”