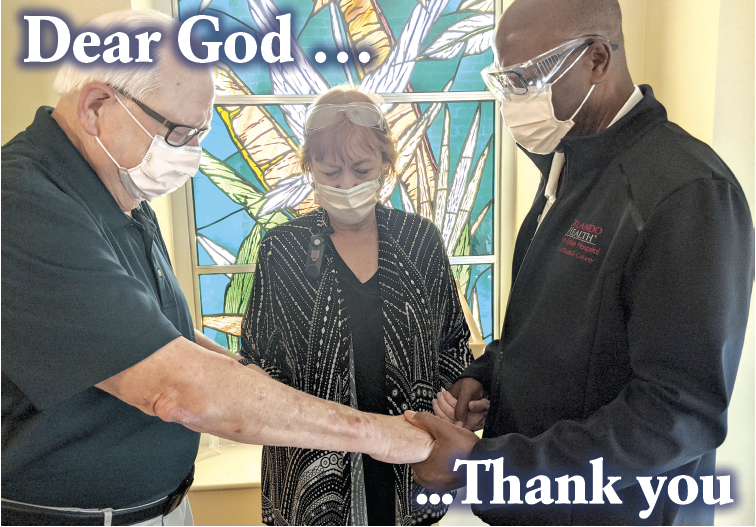 (From left): Chaplains David Benshoff, Judy Stevens and Damian Emetuche take one another’s hands in prayer and give thanks to God. 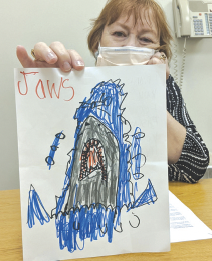 Chaplain Judy Stevens holds up a drawing a six-year-old created. It was part of a project the six-year-old and classmates participated in, which included bringing cookies, for nurses, doctors and others.

On the back of the drawing, a message was written: Thank you for risking your lives.”

(From left): Chaplains David Benshoff, Judy Stevens and Damian Emetuche take one another’s hands in prayer and give thanks to God.

Chaplain Judy Stevens holds up a drawing a six-year-old created. It was part of a project the six-year-old and classmates participated in, which included bringing cookies, for nurses, doctors and others.

On the back of the drawing, a message was written: Thank you for risking your lives.”

For many in times of duress at South Lake Hospital, when a loved one is sick or has died — especially during these times of the pandemic — it proves a source of solace to reach out to any of the four hospital chaplains. (Editor’s note: Only three were available for interviewing.)

But who do the chaplains turn to, what do they do when it is they, themselves, in need of comforting? More so, what is it that reaches them, breaks down the safeguards they have erected around themselves in order to be there for others? What is it that lowers their protective shields?

Judy Stevens held up a drawing. A drawing by a six-year-old. It was one of a number of drawings school children had done to encourage the many people who work at the hospital.

The drawing was that child’s rendition of the movie poster from “Jaws.” But it was what was on the flip side of the sheet of paper. The child had written the following: “Thank you for risking your lives.”

A lone tear trickled down the right side of her face.

But what of those acts of kindness that brings joy to them and so many more?

“Five bags of cookies,” said Stevens. The same group of church children who had created the drawings were also the ones who brought in the cookies. “You would not believe the joy a box of cookies brings to a nursing unit.”

Her compatriots, the Rev. Damian Emetuche and the Rev. David E. Benshoff, nodded in agreement, and based upon the nodding of heads and the raising of eyebrows, despite wearing facemasks, it appeared they were smiling at the recollection,.

WHO CAN I TURN TO?

To a person, the three chaplains, as well as the one who could not attend, acknowledged it is not easy on them, but their concerns for the well-being of others take precedence, especially the doctors, nurses, support personnel and the people responsible for the day-to-day running of the hospital: maintenance personnel, kitchen workers, et al.

In point of fact, it is those people who most often make up the bulk of the calls upon the chaplains. For Benshoff, one of the things he does is “make the rounds,” visiting the various departments. Sometimes he will simply sit down with hospital staff in break rooms, listening for snatches of other conversations he is not part of. He takes his cues from there. It comes down to listening to their stories and taking it from there.

“It’s little gestures, such as giving a person a card on their birthday,” said Benshoff. He remembered an adage of his father’s regarding the matter of keeping one’s self alert. “My dad always said the art of listening is remembering God gave us two ears to listen and one mouth to speak, so listen twice as much as you talk.”

Still, it is difficult to reach and reach out to medical personnel. This is especially so when efforts come to be for naught.

“All of our efforts don’t always come out with the outcome we want,” he said. It is more particularly painful when death overtakes co-workers. “We’ve had staff members die, and that affects everybody.”

In a certain manner, Emetuche finds it comparable to firefighters, law enforcement and EMTs.

“One common thing is, we don’t run away. We run towards,” he said. He also likened it to being on the battlefield, with one key difference: “We fight with our knees and our prayers.”

Regardless, they all acknowledge their role is simple: being there for people to vent, which sometimes can “turn the air blue.”

They understand that in grief there is an outpouring of anger, guilt and other emotions. For hospital staff, it often is a situation of not having succeeded, leaving them with a sense of failure. For families of loved ones who are struggling to survive, or for those who have expired, the question often is of why and/or what kind of God allows …

“You don’t answer those questions. They are not meant to be answered,” said Emetuche. “Sometimes you don’t say a thing. You just sit down with them.”

CRISIS OF FAITH, OR ROCK OF STRENGTH?

It is these times the chaplains find most difficult, again especially if it’s someone connected with the hospital who has died. This is when it is most acute to be a pillar of strength, at least outwardly.

“If I’m bawling my eyes out, I’m not doing anybody any good,” said Benshoff.

But does it lead to a crisis of faith when day in and day out the chaplains are confronted with these challenges? It’s a possibility, according to Emetuche.

“It can happen to anybody,” he said. “You have to be grounded in your own faith.”

He added that it doesn’t mean that they aren’t allowed to feel.

“These are the times you have to believe in ‘naked faith.’ You either believe in God, or you don’t,” he said. That, perhaps, is the role of suffering, he continued. “It can either draw you closer or stripped away. That’s what suffering does.”

Benshoff spoke from personal loss. He and his wife lost their son when he was just 13. He didn’t elaborate upon the death.

Stevens concurred, adding that for her there is yet something further.

“I have a feeling in the bottom of my being, that I have a connection with God,” she said.

Confronting the stress they feel, the chaplains are no different from others. They have outlets which they employ.

“I have other friends, chaplains, I can turn to in order to decompress,” Emetuche said. Plus, there are other activities. In his quiet moments he meditates and engages in prayer.

Expressing one’s emotions is a relief valve for Benshoff, who said that behind the façade, chaplains indeed do cry a lot.

“I have a wonderful wife of 51 years I go home to,” he said. There also are two cats and one chihuahua. He also has pastoral friends he can call upon. Then there is his backyard. “One of my hobbies is feeding the birds that come to the pond on my property.”

Perhaps Stevens’ approach is the most expansive of the three.

She also works out three to four times per week, sees a therapist, socializes with friends, has a dog and a 55-gallon fish tank.

“I love to watch the fish swim, carefree,” she said.

But of all her approaches, one matters most.

“I pray and meditate daily. Every day I come to work I first sit in my car and pray,” she said. Stevens added that her prayer asks of God she be granted one simple request, that she be of service to those in need.