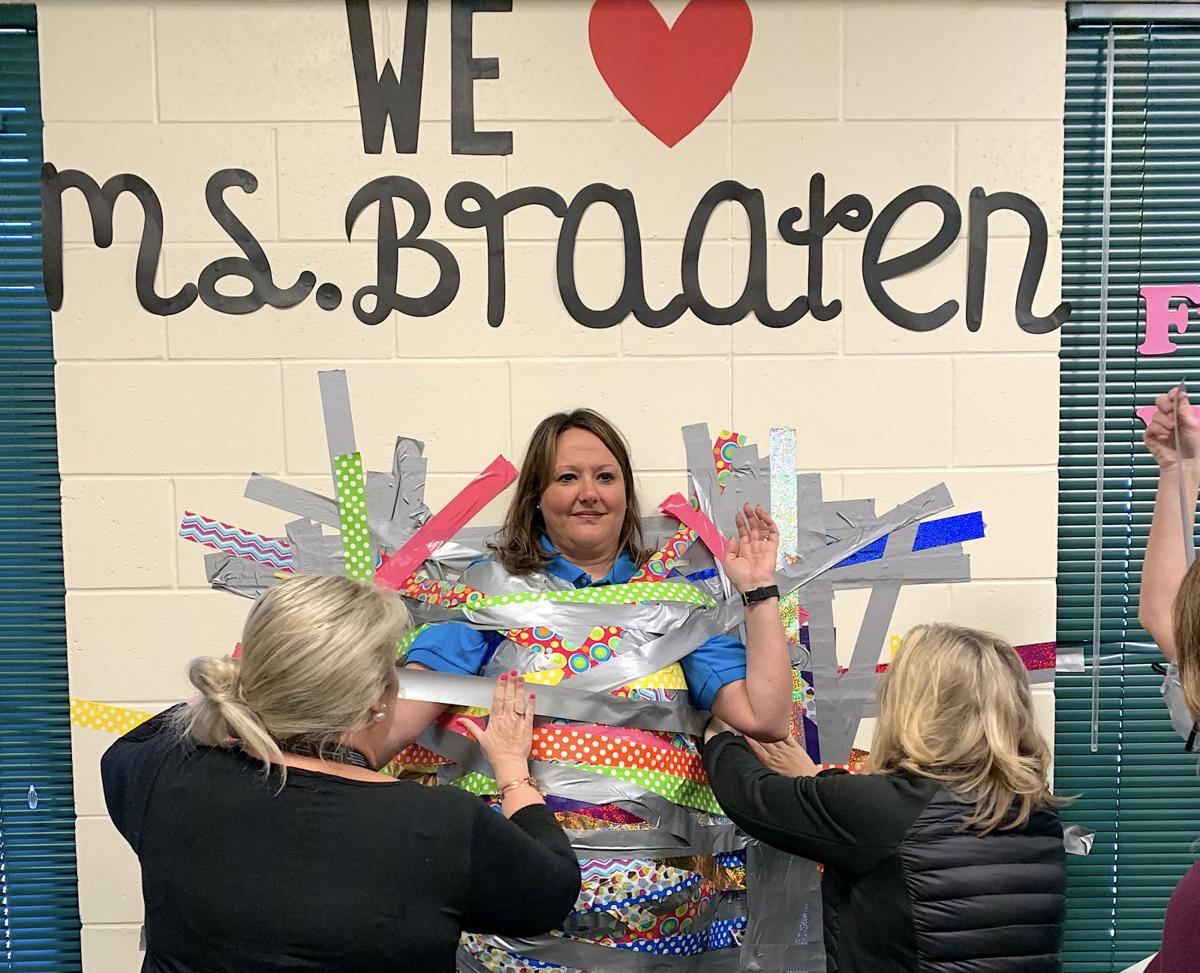 As part of their reward for winning a reading contest, second graders at Davenport School of the Arts got to participate in an event where principal Cindy Braaten was taped to the wall. 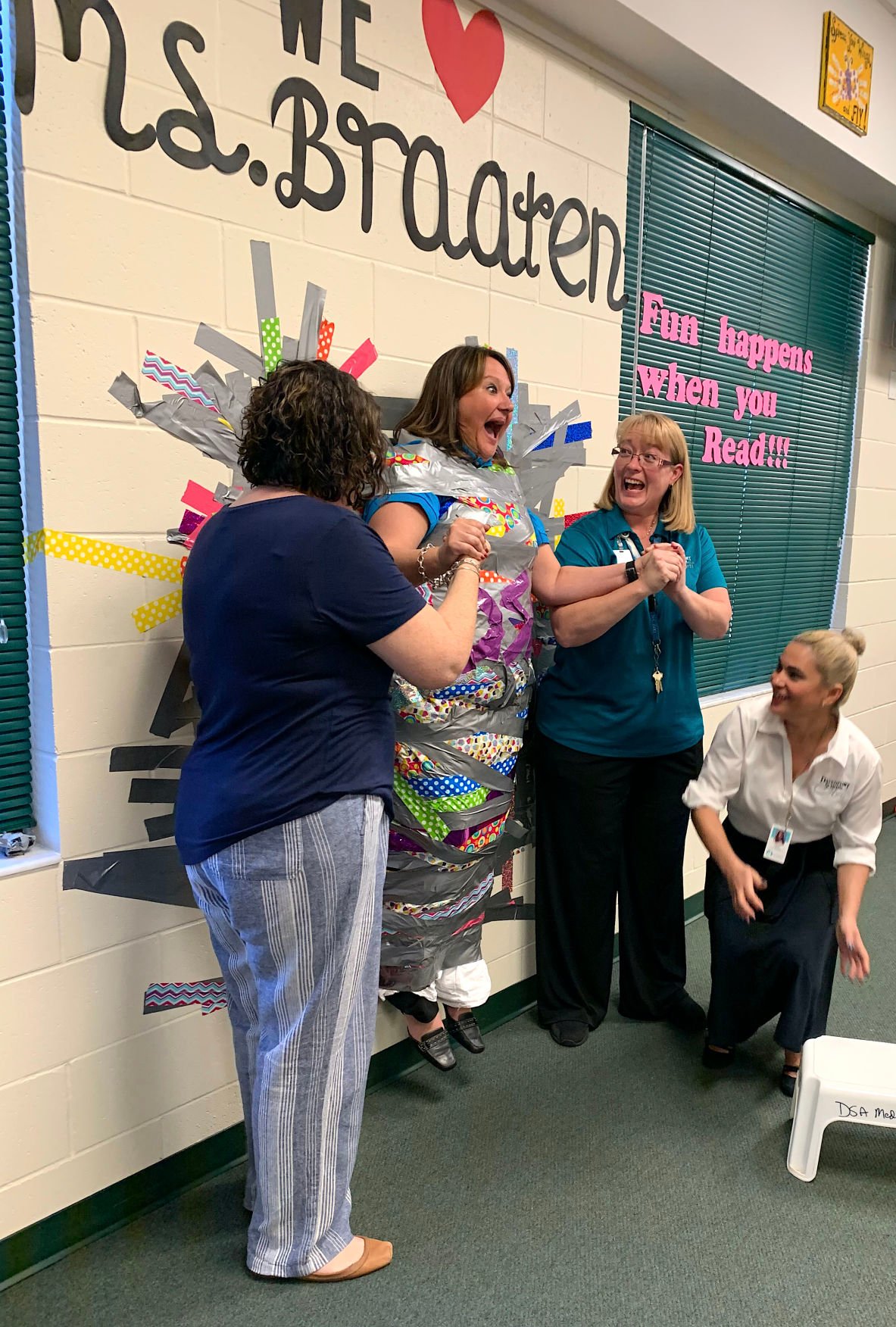 As part of their reward for winning a reading contest, second graders at Davenport School of the Arts got to participate in an event where principal Cindy Braaten was taped to the wall.

DAVENPORT – The second graders at Davenport School of the Arts are schooling their peers by hitting their Accelerated Reading books.

The little bookworms have, by far, exceeded their personal reading goals, winning a recent school-wide competition and, in the process, nurtured a growing love of reading.

For the second quarter – and the entire school year – the school’s three second grade classes easily beat the other grades, including about 1,000 or so kindergarten through eighth graders.

And, as the reward for their win, the 108 second graders and their teachers were allowed – encouraged, in fact - to tape DSA Principal Cindy Braaten to the wall of the school’s media center last week.

Chants of “Tape! Tape! Tape!” could be heard the morning of Feb. 3, as the students — armed with dozens of rolls of decorated tape — covered Braaten from shoulders to knees with the desire to keep here in place and attached to the wall.

The idea was to put so many pieces of tape over her body that, when the step stool was removed from under her feet, she didn’t fall.

And, it worked, too.

The Accelerated Reading program at DSA is designed to encourage students to read by tracking the books they read and then testing them. Each book, once the test is passed, is worth points – the easier the book, the fewer the points. At the beginning of the year, the students are tested and placed in a reading level and then they read books at their level that have been color coded for easy discovery on the shelves.

“The competition made me want to read more,” said Lilly Guarrine, a second grader who participated in the taping.

During the quarter, Lilly read 75 books – well exceeding her goal of nine books - and visited the media center every morning before school to test and to check out books.

The administration, volunteers and parents said that this is just one of the ways the school’s new Media Center staff members are getting students to visit.

“Before (the new staff members) came, in the mornings, the library was dead,” said Betty Zuccaro, a volunteer and parent. “They dedicate their hearts to the kids and their jobs. If they could sleep here, they probably would.”

The school employs two staff members in its media center – Charlene Stamper and Carmen Moro. But, with the help of many volunteers, the library has been transformed into a visually-exciting and kid-friendly space.

From the 20-foot dragon hanging from the ceiling — made up of scales with every student’s name and favorite book — to the ceiling-high “reading tree,” every effort has been made to ensure the students know it is their library.

Stamper started the Accelerated Reading program when she came on board. It wasn’t easy, since every one of the 21,000 books or so had to be color-coded by level. Each book has a computerized test that must be passed in order to receive the allotted points.

Twice a year, the Polk County School Board releases funds and that is when book purchases are made, based on the requests of students.

Additionally, sometimes, the school receives volunteer-earned monies from Disney, who many of the school’s parents are employed by. For example, Haimy Amare, the parent of two students at DSA and frequent volunteer at the library, has given so many hours at Davenport School of the Arts that Disney is donating $1,000 to the school.

The data shows that the program has prompted the students to increase the frequency of reading in all grades.

But, the second graders seem to be the most motivated since they have won both quarters so far.

“They are ahead for the next quarter, too,” Moro said.