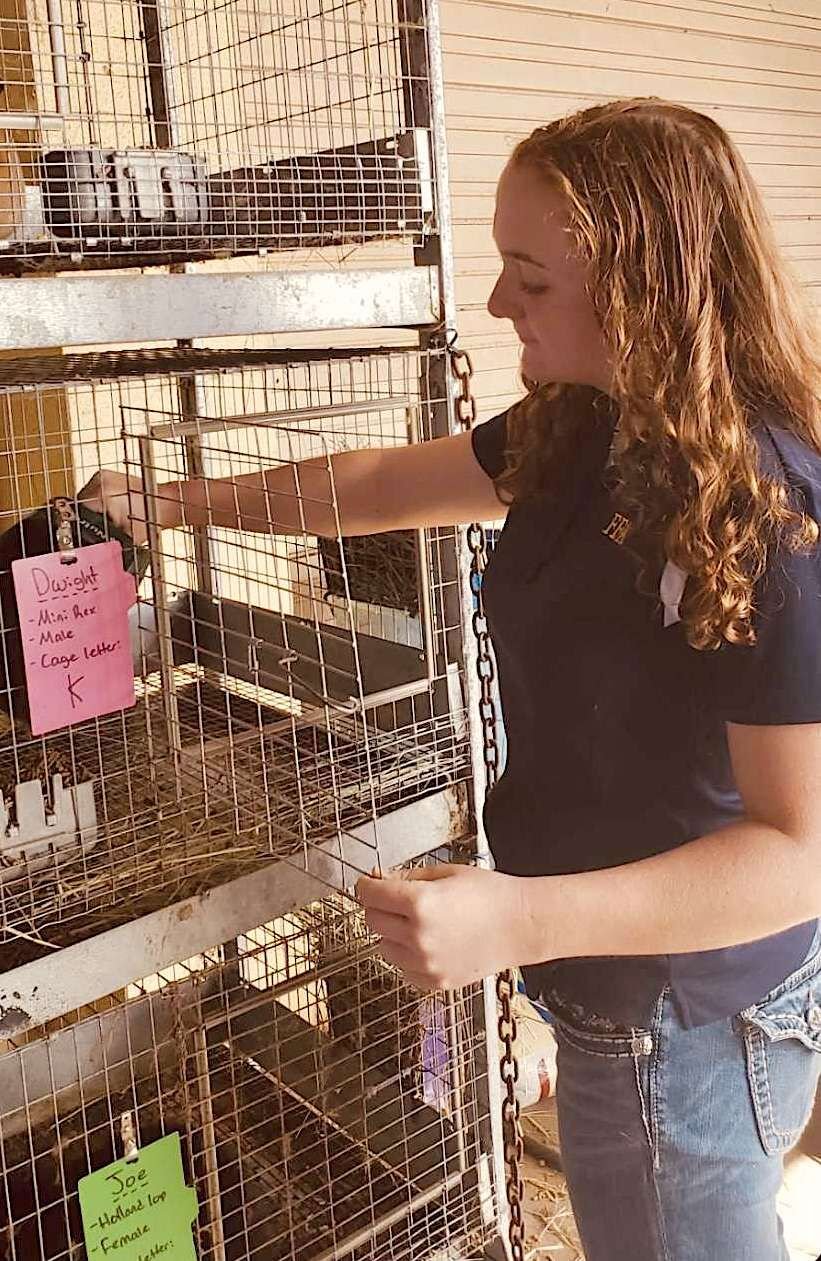 Reanna Brown has impressed friends and family with her diligent care of her animals, including the rabbits she breeds and sells for her business.

Reanna Brown has impressed friends and family with her diligent care of her animals, including the rabbits she breeds and sells for her business.

HAINES CITY – Like many teenagers, Reanna Brown has a busy life.

She attends Haines City High School, where she is the president of the Future Farmers of America and a student advisor for the Polk County (FFA) Federation. She also works part-time at a local farm store and takes extraordinary care of her numerous animals.

Her parents and friends say she's more responsible than most teens her age, getting up early to ensure the animals are fed and watered.

Brown even takes that accountability one step farther as the owner of a successful small business.

For the past two years, Brown has been the sole proprietor of Reanna's Rabbitry, an agricultural company breeding show and pet rabbits.

For the local teen, it all started when her agriculture teacher, Eddie Congdon, gave her a rabbit. Coincidentally, about that same time, a neighbor gave her a rabbit when they couldn't relocate with it. It was love at first sight for the two rabbits — Lola and Fluffy — thrown together by fate.

"After they had their first litter of kits (baby rabbits), I quickly learned how many people were interested in buying them," Brown said. "I posted about it on Facebook and, within hours, they were sold."

Brown also has three purebred Brangus cattle, one commercial heifer, a Zebu (mini) bull and two Zebu heifers, and two chickens. In association with FFA, she shows the cattle and plans to do so at the upcoming Polk County Youth Fair in January.

Earlier this year, Brown said she earned the accomplishment for which she is most proud.

"I got Reserve Overall Brangus Bull at the 2020 Strawberry Festival," she said.

The bull, Kab Mr. Duramax Black Smoke — or “Smoke,” as she affectionately refers to him — will compete at the Youth Fair, as well.

"I love showing my cows because it is so rewarding to watch the cow you raised do awesome and see how far it's come," she said.

Brown’s pets need food and care — and that takes money. That money is partially provided by her rabbit business.

Currently, she has purebred Netherland Dwarf, Holland Lop, and Mini Rex rabbits. Rabbits are judged on their size, color, bone structure and muscle.

In addition to competing with her animals, Brown is part of teams evaluated on agriculture areas, like citrus and ornamental horticulture demonstrations.

She credits her role model and cousin, Abby Crawford, Coordinator of Advancement and Ag Programming at Warner University, with introducing her to the field of agriculture.

"I've seen all the things she's been able to do in the ag field," Brown said. "I've watched her all my life, and that's how I got interested in ag."

When Brown has rare spare time, folks can see her wheeling down the highway in her Ford F-250 truck going fishing with her father, Ryan.

"My wife and I are blessed with Reanna. We think it's awesome to see today's youth active within the community," he said. "I don't know how she does what she does. She's not an ordinary teenage girl. She is very motivated about work, school and her animals."

The family lives on Lake Pierce, but they don't limit their fishing to that body of water.

"We go wherever he feels like going that day," said the self-professed daddy's girl.

They fish for bass, speckled perch, or whatever happens to be biting.

For more information about her business and its rabbits, visit facebook.com/ReannasRabbits.