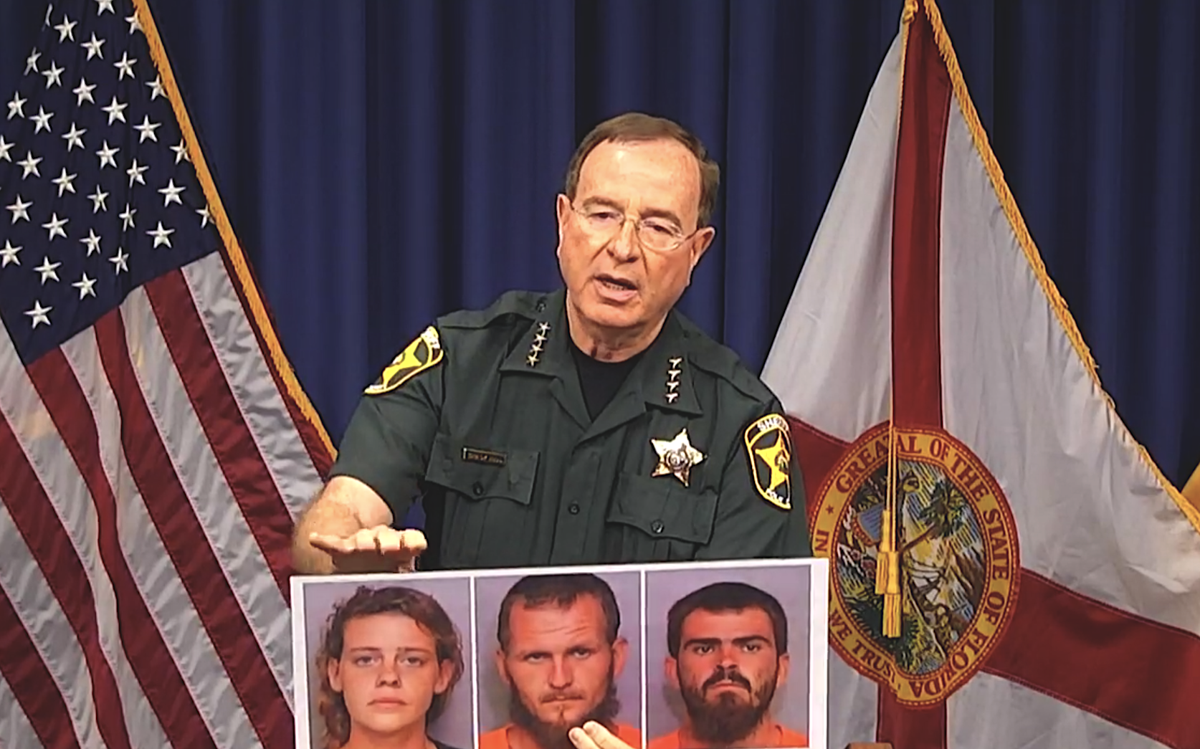 Polk Sheriff Grady Judd briefed the media July 22 on the arrests of Mary Whittemore, Tony "TJ" Wiggins and William "Robert" Wiggins — depicted in the image Judd is holding, from left — in relation to the triple homicide that occurred July 17 in Frostproof. 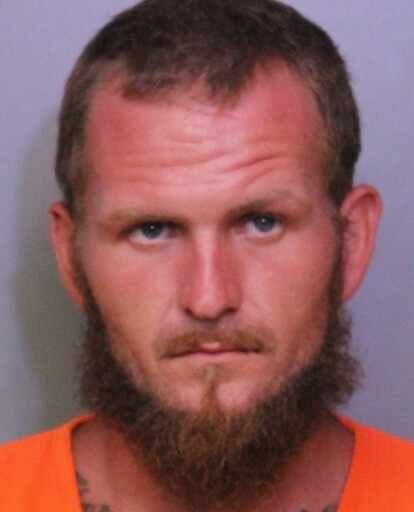 Tony "TJ" Wiggins has been charged with three counts of first-degree murder.

Polk Sheriff Grady Judd briefed the media July 22 on the arrests of Mary Whittemore, Tony "TJ" Wiggins and William "Robert" Wiggins — depicted in the image Judd is holding, from left — in relation to the triple homicide that occurred July 17 in Frostproof.

Tony "TJ" Wiggins has been charged with three counts of first-degree murder.

The Polk County Sheriff’s Office has made three arrests in relation to the triple homicide that occurred in unincorporated Frostproof July 17.

All three are facing charges related to the murders of Damion Tillman, 23; Keven Springfield, 30; and Brandon Rollins, 27 — three Frostproof area residents who had traveled to a remote location on Lake Streety Road for a fishing trip and instead were found brutally murdered by Rollins’ father.

Judd identified Tony Wiggins, who is the older brother of Robert Wiggins, as the “trigger man” who shot and killed the three men and detailed his criminal record of 230 felony charges as well as his history of assault and battery charges.

He also credited both his homicide investigation team and the volume of tips received from the community in relation to the case in facilitating the arrests.

According to Judd, the path to the arrests began with a Dollar General bag.

Investigators on the scene of the crime identified the bag with a receipt dated from the night of the murders. With cooperation from staff at the Dollar General store, detectives were able to review surveillance video of Damion Tillman making purchases there roughly 10 minutes before the crimes occurred.

According to Judd, the name of Tony “TJ” Wiggins had been brought up in several of the tips investigators received in recent days as someone police should look into. So, when investigators also saw in that surveillance video that Tony Wiggins and Robert Wiggins were standing behind Tillman in line at the store, they focused their attention on the Wiggins brothers and Mary Whittemore — Tony Wiggins’ girlfriend — who was also understood to be with them that evening.

Investigators obtained a search warrant for a parcel of land on Sarver Avenue in Lake Wales where, on July 20, they found the three suspects occupying a travel trailer. There, they found several firearms in a safe belonging to Tony Wiggins who, as a convicted felon, was not legally permitted to have them in his possession.

The search also yielded a shell casing that was similar to the casings found at the scene of the crime.

Tony Wiggins was arrested and retained the services of a lawyer. Meanwhile, Judd told reporters that detectives’ questioning of Robert Wiggins and Whittemore led to several inconsistencies in their stories of what had happened the night of the murders.

PCSO officials sent the casing found at the residence of the suspects to the Florida Department of Law Enforcement lab for testing, which FDLE staff expedited. The results came back positive, confirming the casing found with the suspects was fired from the same Smith & Wesson handgun that fired the rounds at the scene of the crime.

Detectives again interviewed Whitemore and Robert Wiggins and, though Whittemore admitted to purchasing the ammunition, she eventually stopped cooperating with investigators.

The interview with Robert Wiggins, however, helped bring to light what transpired that evening.

Robert Wiggins admitted to seeing Tillman in the store that evening. An interview with the store clerk, as well as the surveillance video, all suggest that the suspects overheard Tillman talking about his fishing trip — and that Tony Wiggins became aware that Keven Springfield would be present.

The suspects allegedly followed Tillman’s truck to the location on Lake Streety Road, where a confrontation ensued. As outlined in a PCSO release, Robert Wiggins claims to have remained in the truck he drove with Whittemore while Tony Wiggins exited the truck with a firearm and specifically confronted Keven Springfield. He struck Springfield and began shouting at him, accusing him of stealing his truck.

Shortly after Brandon Rollins and Damien Tillman exited their respective trucks to try and deescalate the situation, Robert Wiggins told detectives that Tony Wiggins continued shouting and pointing the gun at the victims before he eventually opened fire on all three men.

Judd was adamant that there is no evidence to this point that drugs played a role in killings.

“The only information we have is TJ is allegedly mad over some kind of truck deal that happened some period of time to go,” Judd said, noting that his detectives are in the process of investigating that particular aspect of the crime.

Robert Wiggins told detectives that after the crime, he, Tony Wiggins and Whittemore went to a McDonalds drive-through, during which time Tony Wiggins instructed the others that “we weren’t there.”

The next day, Robert Wiggins took the truck he was driving, which belonged to a family member, to a car wash to clean the clay from it.

Judd noted at the press conference that many residents had expressed a desire to contribute to the reward for information on the case, which had jumped from $5,000 originally to $30,000 by Monday, July 20.

Instead, Judd said those who feel compelled to provide some sort of financial support to instead donate to the families of the victims, who he acknowledged would face a great financial strain in preparing funerals for their deceased loved ones.

“If there’s an inclination to help these folks bury their loved ones, I’m certain that would be appreciated,” Judd said.

Judd said the investigation was ongoing. Tony Wiggins has been charged with three counts of first-degree murder, while Robert Wiggins and Mary Whittemore are facing charges of being accessories to a capital felony and tampering with evidence.

The Polk Sheriff also praised his investigative team, which he said worked around the clock beginning when they were alerted to the crimes Friday night.

“By Tuesday afternoon, this homicide team had them in jail,” Judd said. “We’re grateful for the tips we received and the outpouring of support from the community.”