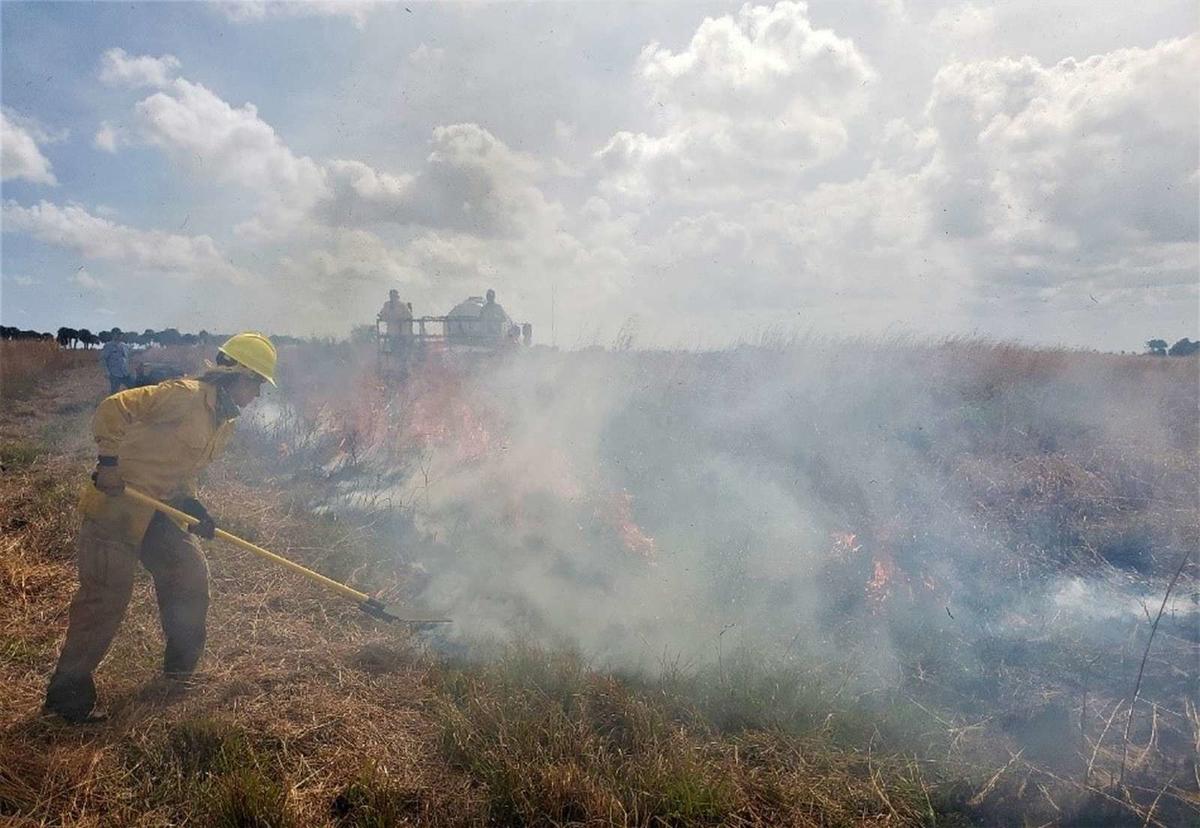 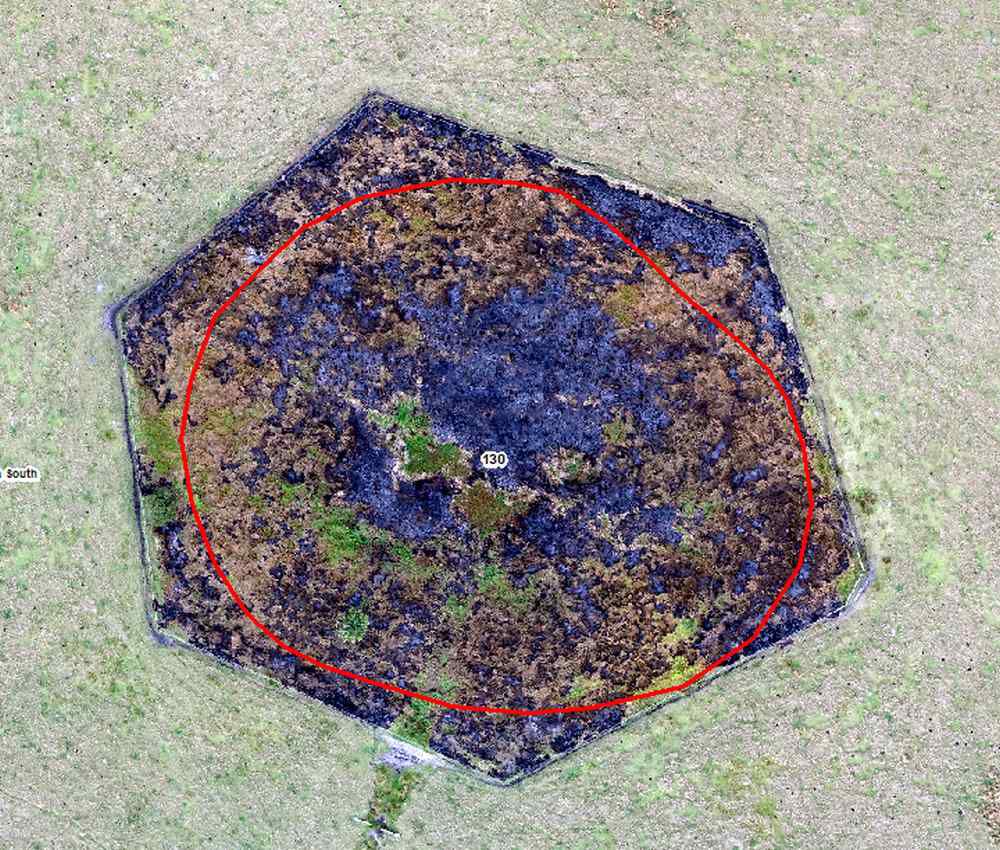 A drone shot after a patchy prescribed burn of a 2-acre Buck Island Ranch wetland that has been fenced for a long-term experiment.

A drone shot after a patchy prescribed burn of a 2-acre Buck Island Ranch wetland that has been fenced for a long-term experiment.

Have you noticed distant smoke plumes while driving along US Highway 27 or State Road 70? Earlier this year, pre-COVID and before the recent drought-triggered burn ban, it was burning season for many ranchers and land managers in Highlands County.

As usual, the research and operation crew at Archbold’s Buck Island Ranch had an active prescribed fire season. Fire is an important management tool for Florida pastures and rangelands and for other Florida habitats. Many native Florida plants and animals require fire to maintain certain vegetation heights and openness. Some plants even require fire to germinate and flower!

For ranchers, fire is an important tool for fresh forage and removal of dead vegetation and shrubs. Each year, Buck Island Ranch burn managers, Laurent Lollis and Gene Lollis, in collaboration with the ranch scientists, create a burn plan for the ranch that meets both ranch operational and research needs.

Alan Rivero, one of the ranch research assistants, geared up research interns and reinforced fire safety lessons in preparation for their participation in prescribed burns. Rivero explained, “Following safety regulations for prescribed burns is a must and is essential for a safe day.”

For Hannah Van Zant, Caroline Wade, and Juan Olivares, three research interns at the ranch, this was the first time they had participated in a prescribed fire. “I expected these fires to be relatively tame, but I was wrong,” said Wade, who is from California and who joined the ranch research team this year.

This year, Dr. Betsey Boughton, director of research at Buck Island Ranch, and her research team prepared sensors that were buried in the ground to measure soil temperature during the fire.

“We have been using prescribed fire at Buck Island Ranch as a management tool and in numerous experiments for many years, but surprisingly, we never measured how intense and variable these fires can get,” said Boughton.

“Fire temperatures could greatly affect things we study such as soil nutrients, carbon, and plant growth. This year’s burning schedule was packed. For research burns this year, we needed to burn 16 experimental pastures (40 acres each) and 20 small seasonal wetlands and we wanted to record fire temperature in each of them,” added Dr. Gregory Sonnier, research scientist at Buck Island Ranch.

Rivero had the responsibility for setting up sensors and retrieving them after the fires. With all the sensors in place, and the fire crew ready to begin, burn boss Laurent Lollis gave the signals to start. Using a drip torch tool mounted to the back of an all-terrain vehicle, Lollis would light a strip of fire and begin the day.

One of the interns, Van Zant, helped to contain fires within the prescribed burn area. Smothering patches of flames with a tool called a flapper, she extinguished flames from small escapes.

She now understands why she was told to wear protective fire gear at all times, “I was blown away by how intense the head-fires were. Seeing the flames around the palms, and the attentive work of the ranch hands gave me so much respect for those who work in fire management.” After hours of intense heat, lapping flames, and smoke-filled air, the group of exhausted cowboys and researchers would hang up their hats and head back to the office.

“The pastures burned quite well, and I was very excited to retrieve our sensors and take a look at the data,” proclaimed Rivero.

The morning following a fire, Rivero would drive out to the previously burned pastures and begin retrieving the sensors. A charred landscape was laid out before him, and a trail of black ash would accumulate in the air as he drove his field truck to the sensor locations. What seemed like a barren land that day would soon be covered in green grasses, as many species here thrive after fire. The new grass will be a treat for the cattle as well. With shovel in hand, Alan carefully removed every sensor from the soil.

Back in the lab, Rivero and Sonnier downloaded the data from each sensor, and took preliminary looks at the recorded temperatures. Like the Florida summer, Florida fires are hot — very hot—but they are also quick.

“We recorded maximum temperatures of 750 F consistently in some of our pastures, but only for a maximum of 2-3 minutes at any given location. Once all of the pasture data have been analyzed, we hope to investigate how fire intensity is affected by grazing management, habitat, and vegetation types,” Rivero explains. However, this year the research team also experienced failures in conducting burns due to rainfall in winter months creating challenging conditions for prescribed fire. “Pastures burned pretty well, but wetlands didn’t burn well as many were surprisingly wet for the season.”

The data collected from these experiments can help build a larger picture of land management for Florida ranches. “We think that well-managed areas might burn more consistently, and generate lower peak fire temperatures; however, we will need more years of data under a variety of weather conditions to test this hypothesis,” says Rivero. Fire is an extremely important process in our Florida ecosystems.

Prescribed burns in Florida aid in plant growth, which is beneficial for both the cattle and the natural areas we cohabitate. These prescribed burns affect everything from daily management to wild-fire suppression. Rivero said “Prescribed fire management can be a win-win for nature and cattle. Cattle ranches make an important contribution to the Florida economy and also help protect many species, not only by protecting land, but also by utilizing prescribed fire management.”