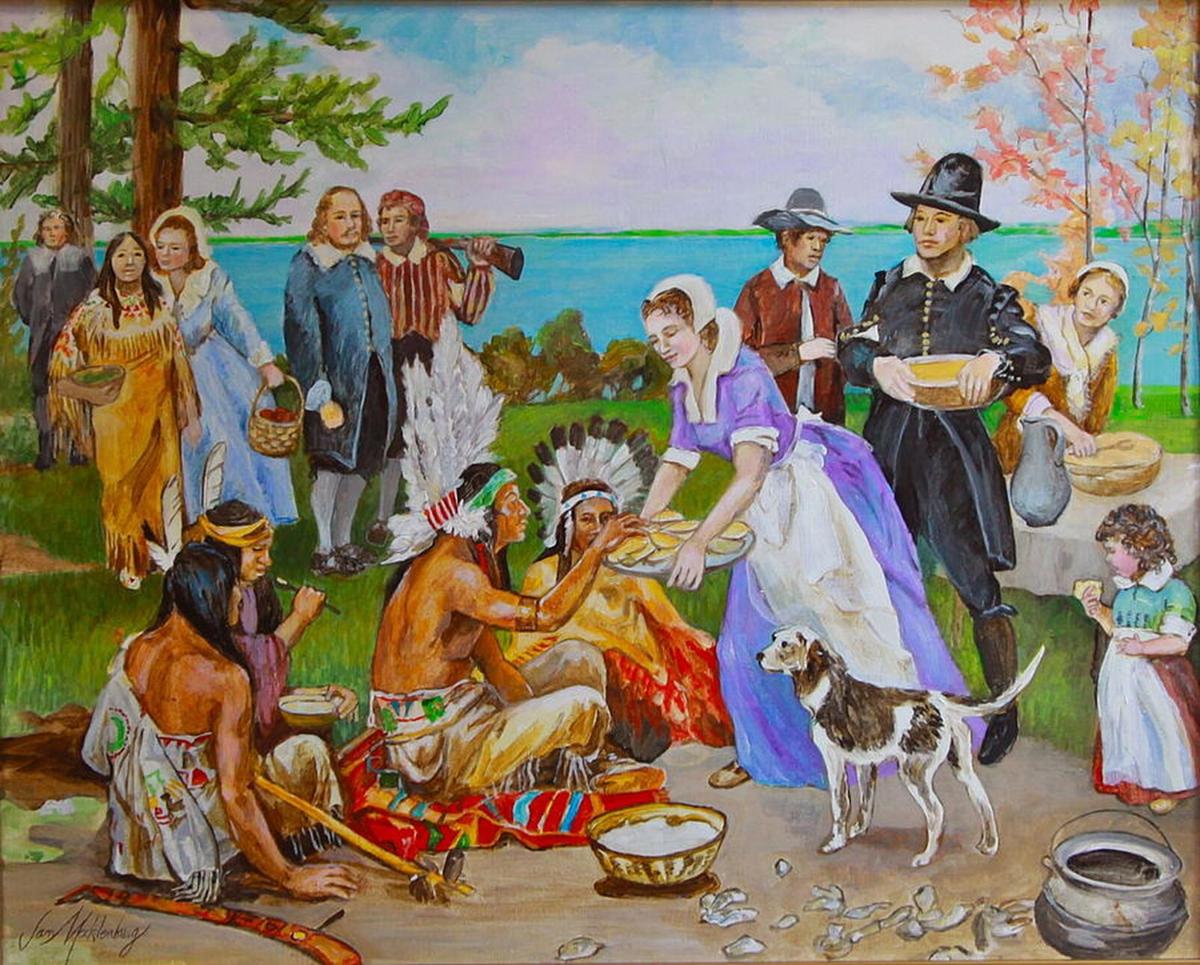 Jan Mecklenburg painted this depiction of the first American Thanksgiving from a painting by Jean Leon Gerome Ferris in 1889. The costumes of both pilgrims and Native Americans may not be accurate, but the food is closer to the menu available in 1621. 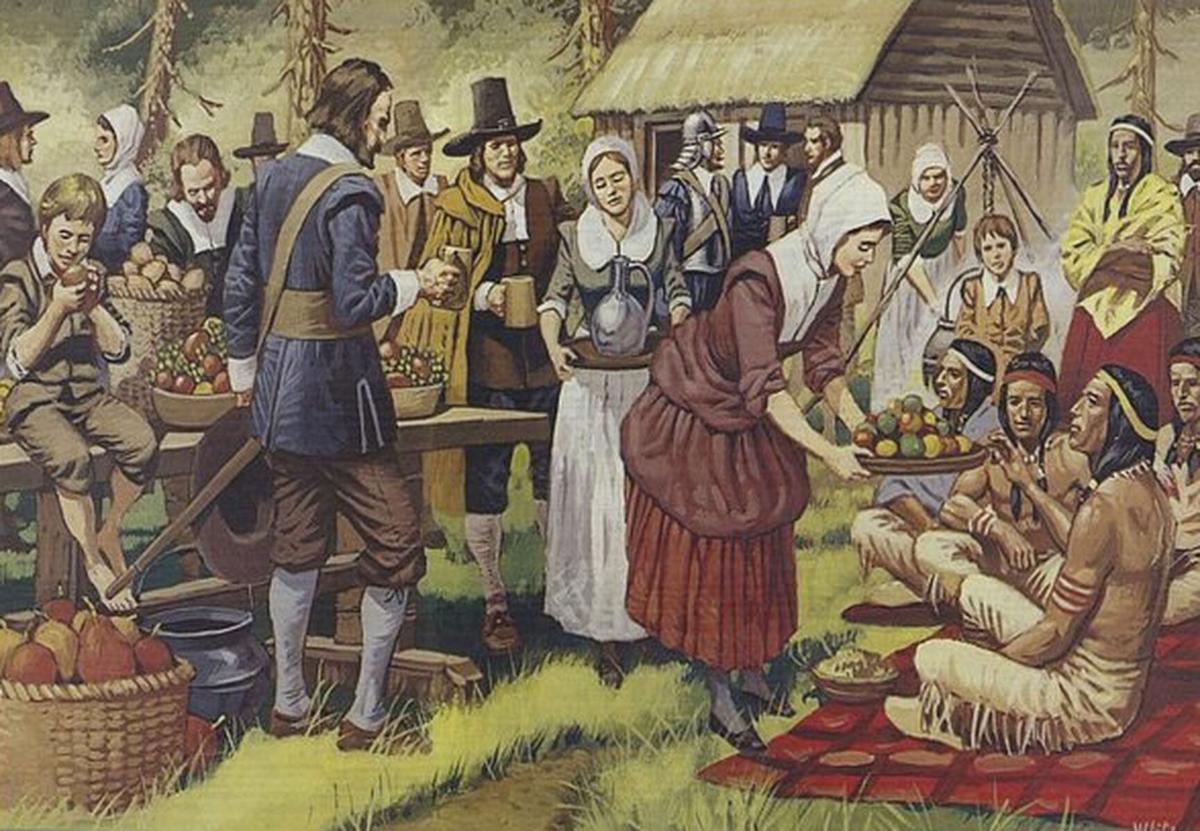 In a wood cut printing by Mike White, attendees at what is heralded as the first Thanksgiving feast in 1621 share vegetables and bread. Meat at the meal consisted of game birds and venison. Turkey would come many years later.

Jan Mecklenburg painted this depiction of the first American Thanksgiving from a painting by Jean Leon Gerome Ferris in 1889. The costumes of both pilgrims and Native Americans may not be accurate, but the food is closer to the menu available in 1621.

In a wood cut printing by Mike White, attendees at what is heralded as the first Thanksgiving feast in 1621 share vegetables and bread. Meat at the meal consisted of game birds and venison. Turkey would come many years later.

At least, those at the first official feast in 1621 did not have those items on the menu. It’s changed in 400 years, and some of those items — green bean casserole, for certain — didn’t show up until sometime in the last two or three generations.

Thanksgiving, as a family feast holiday, has its own traditions unique to each family, and the expected menu varies as much as each family.

The first feast, according to historic accounts, included 53 pilgrims — all that remained of the 100 who had landed — and approximately 90 members of the Wampanoag. Reportedly, four pilgrim women cooked and the menu included game birds hunted by the pilgrim men and venison brought by the Wampanoag.

Some reports state that early feasts lasted several days and included dozens of people. Turkey was not the centerpiece of the meal, as today. Smithsonian Magazine reports that the meal more likely had goose and duck, as well as swans and Passenger Pigeons.

Extinct now, that species of pigeon flocked in so many numbers in the 1620s, people claimed to hear them a quarter-hour before they could see them.

Birds were stuffed with onions and herbs, but likely not bread, Smithsonian reports. The colonists and Wampanoag also had eels and mussels, as well as a “varied and extremely good diet” from the Wampanoag. Like all Eastern woodlands tribes, they gathered chestnuts, walnuts and beechnuts and grew flint (multi-colored) corn, beans and different sorts of pumpkins or squash.

Chicken pie, once a part of the meal, is now relegated to a quickly heated-up side dish to hold people over until the “real meal” is ready. And of course, green bean casserole didn’t show up until 1955 — the brainchild of Dorcas Reilly in the Campbell’s test kitchen in Camden, New Jersey.

It took more than 150 years for the first national proclamation of Thanksgiving by the Continental Congress in 1777, and then four score and six years later, on Oct. 3, 1863, out of gratitude for a pivotal Union Army victory at Gettysburg, that President Abraham Lincoln announced the nation would celebrate an official Thanksgiving holiday on Nov. 26, 1863 — 157 years ago.

That was when the modern holiday took root and the modern menu began to take shape. Turkey was the centerpiece by then, as many Union Army soldiers wrote in letters and diaries about having just that on the first national Thanksgiving Day. Smithsonian reports that nostalgia for colonial times also fueled the holiday, as did Sarah Josepha Hale, editor of the popular women’s magazine Godey’s Lady’s Book.

She apparently started lobbying presidents to establish the national annual event as early as 1827 — 13 presidents in total — until she convinced Abraham Lincoln that the holiday could help unite the country in the midst of the Civil War.

All that time, Smithsonian reports, she continued to publish Thanksgiving recipes and menus in Godey’s Lady’s Book as well as a dozen cookbooks, effectively providing a menu for home cooks once she got the day established.

Historians state that the foods we consider staples — roast turkey with sage dressing, creamed onions, mashed turnips, even some of the mashed potato dishes — were exotic then.

One menu item that wasn’t exotic, but gained full traction with Thanksgiving, was pumpkin pie. The Washington Post reports that recipes featuring pumpkin, including pie, started in the 1600s, it became a Thanksgiving dessert in the early 1800s and by 1969, had become synonymous with the holiday, as much as turkey.

Food continues to evolve. The Post reports that pumpkin pie has gone “vegan” by using tofu — from Asian cuisine — in place of eggs and milk, normally used to give structure to the pumpkin and spices. As the Post puts it, English pie-making, a Central American vegetable, and an Asian religion come together in a new twist on a traditional North American dessert.

Oh, and coffee with the pie? The Middle-Eastern drink reportedly arrived in North America when Captain John Smith, the founder of the Colony of Virginia, shared it with other Jamestown settlers in 1607. It didn’t take off with the English colonists, who preferred tea, hard cider and ale. It wasn’t until after the Boston Tea Party in 1773 that Americans started drinking coffee.

As for drinking it “after dinner,” the most obvious reason suggested by food bloggers may be how coffee helps counteract that lethargic feeling we all have after eating a heavy meal. Plus, it speeds up digestion and helps make more room for the pumpkin pie.