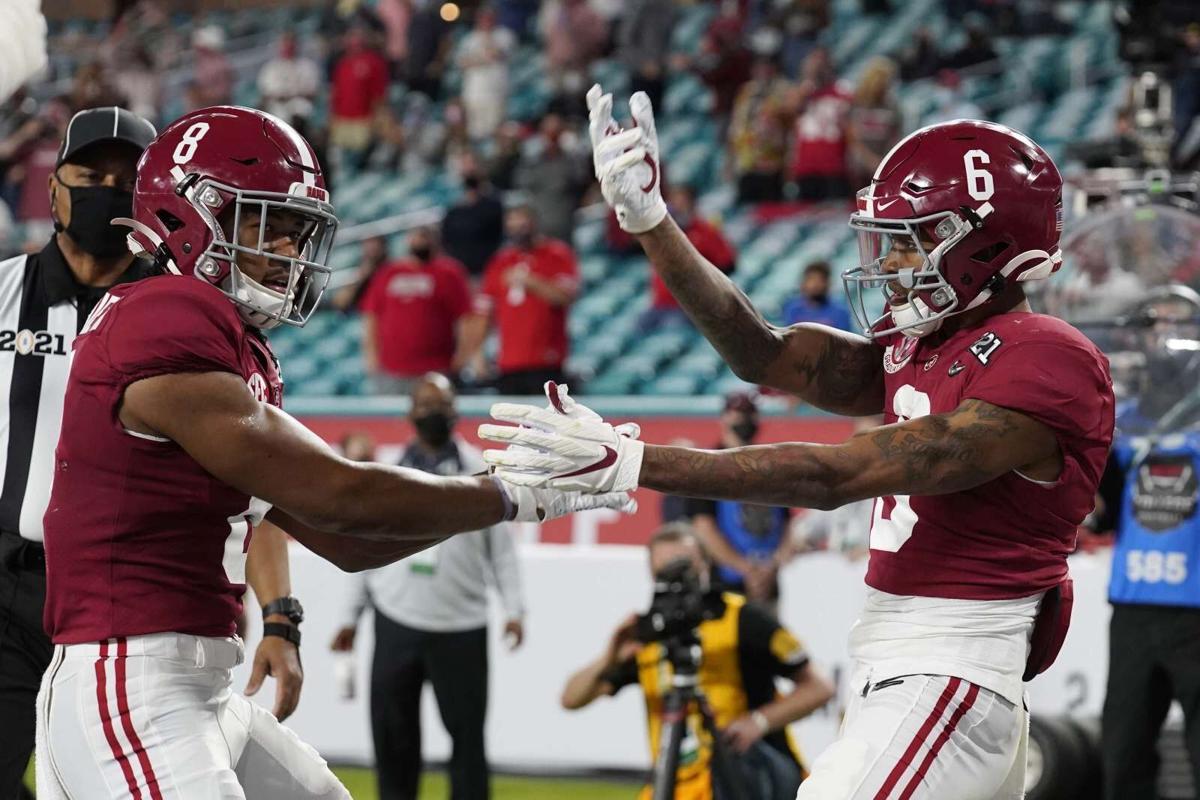 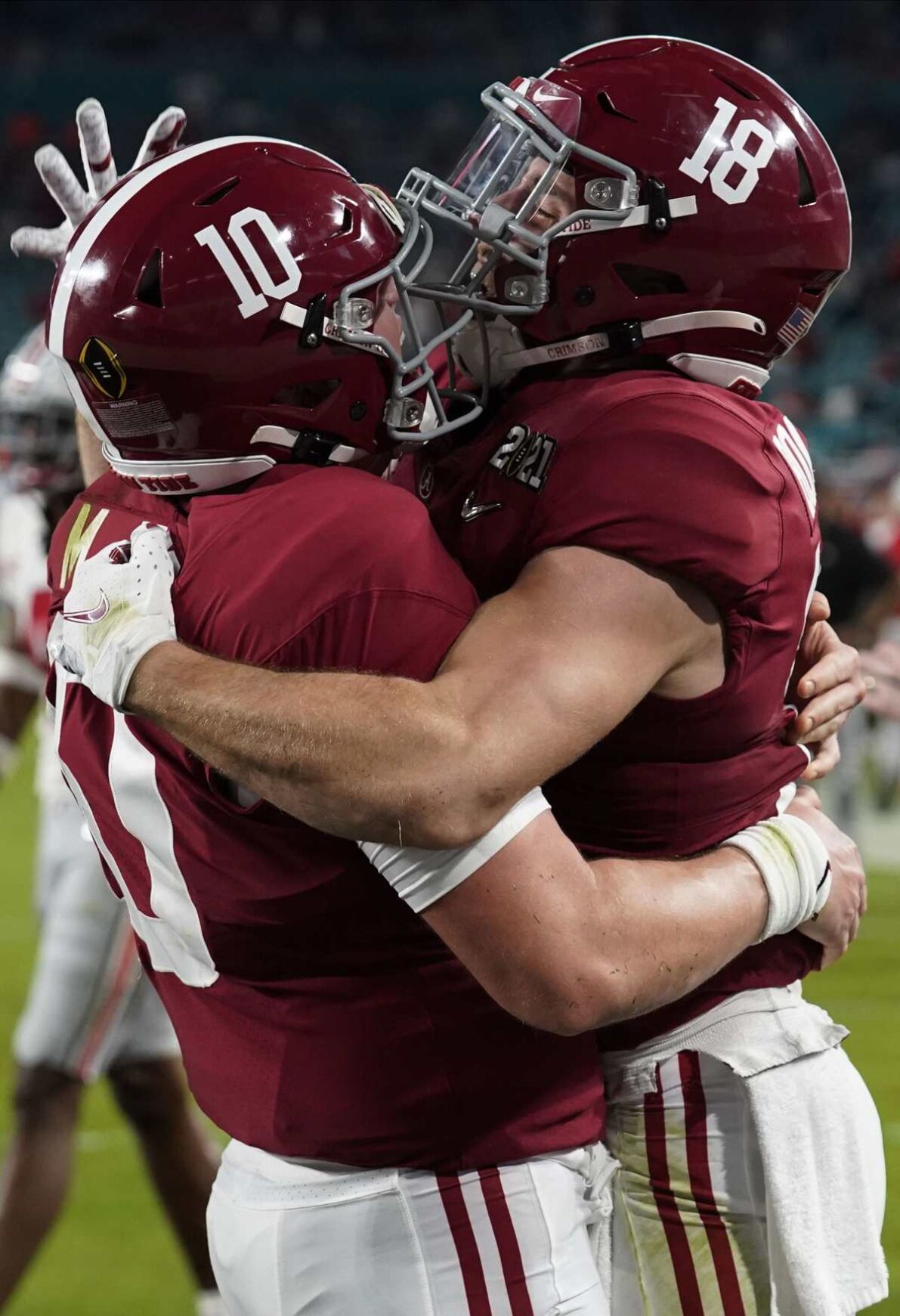 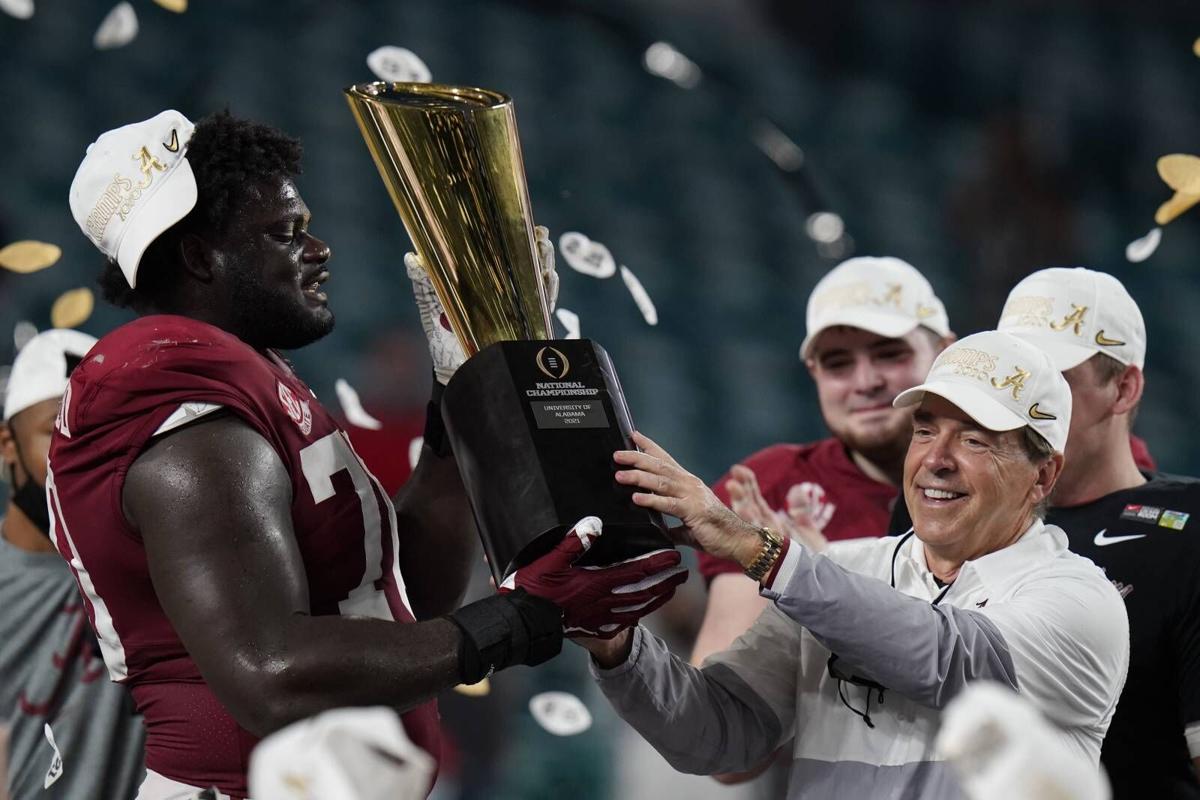 MIAMI GARDENS — The celebration was at once familiar and unique. The confetti cannons sent a crimson and white shower into the air and Alabama players ran to the sideline to grab their championship hats and T-shirts.

It’s a rite of passage if you have played for the Crimson Tide under coach Nick Saban.

This time, though, the band playing the fight song was a piped -in recording, and when “Sweet Home Alabama” blared, only a few thousand Tide fans were still in the stadium to sing along.

The final game of a college football season in a pandemic, a season that was uncertain to be played in the summer and filled with disruptions in the fall, ended in the most predictable fashion: Alabama as national champion for the sixth time in the last 12 years under Saban.

DeVonta Smith was uncoverable, Najee Harris unstoppable and Mac Jones impeccable as the top-ranked Tide won the College Football Playoff national championship game 52-24 against No. 3 Ohio State on Monday night. They finished the year 13-0 — a full season when many wondered if it would be possible to play any.

“I think we’re the best team to ever play,” Jones said.

For Saban, it was career title No. 7 overall, breaking a tie with Alabama great Paul “Bear” Bryant for the most by a major college coach.

“To me this is the ultimate team,” Saban said. “There is more togetherness on this team than on almost any team we’ve ever had. They’ve had to overcome and to persevere so much through this season, and they have done it magnificently.”

Ohio State (7-1) just couldn’t keep up. Justin Fields, playing what might be his last game before heading to the NFL, passed for 194 yards and a touchdown. Whether Fields was 100% after taking a brutal hit to the side during his brilliant semifinal performance against Clemson was hard to know for sure.

“I was able to be out there,” was all the junior quarterback would say.

On the Buckeyes’ first drive, they lost star running back Trey Sermon to an injury, and in a game they needed to be running at top speed, facing one of great offenses in recent history, they sputtered too much. Ohio State has never allowed more points in a bowl game.

“I think there’s a feeling of, if you don’t score you’re going to get behind and then the pressure mounts,” Buckeyes coach Ryan Day said of facing the Tide’s prolific offense.

Fans can debate which team in the Saban dynasty is best, but none will be more memorable than this group.

“Everybody is so together,” Smith said. “People last year said the dynasty was over. We don’t stop. We just keep reloading.”

After going a whole two seasons without winning a national title, the Tide finished perfect during a season that could not have been further from it. COVID-19 forced teams into quarantines and endless testing and uncertainty every single week with games played in mostly empty stadiums.

“To me this team accomplished more than almost any team,” Saban said. “No disrespect to other teams we had but this team won 11 SEC games. No other team has done that. They won the SEC and went undefeated in the SEC and then they beat two great teams in the playoffs with no break. I think there’s going to be quite a bit to write about the legacy of this team.”

Only about 15,000 fans were at Hard Rock Stadium, capacity 65,326, to see the last magnificent performance of Smith’s college career. The Heisman Trophy winner had catches for 12 catches for 215 yards and three touchdowns, all in the first half.

“Heaven knows what he would have done if he played the whole game,” Saban said.

Using an array of motions and misdirections, outgoing offensive coordinator Steve Sarkisian had Ohio State heads spinning trying to track down Smith. At one point, he suddenly was matched up against a linebacker, whom he left in the dust for a 42-yard score to make it 35-17 with 41 seconds left in the second quarter.

Smith, who finished his freshman season by catching the 2017 national championship-winning touchdown pass from Tua Tagovailoa, ended his Alabama career as the leading career receiver in Southeastern Conference history and the most outstanding offensive player of his third title game.

As for Sarkisian, he is on his way to Texas as the head coach. Longhorns fans had to have liked what they saw. If only he could bring Smith and his fellow Heisman contenders to Austin.