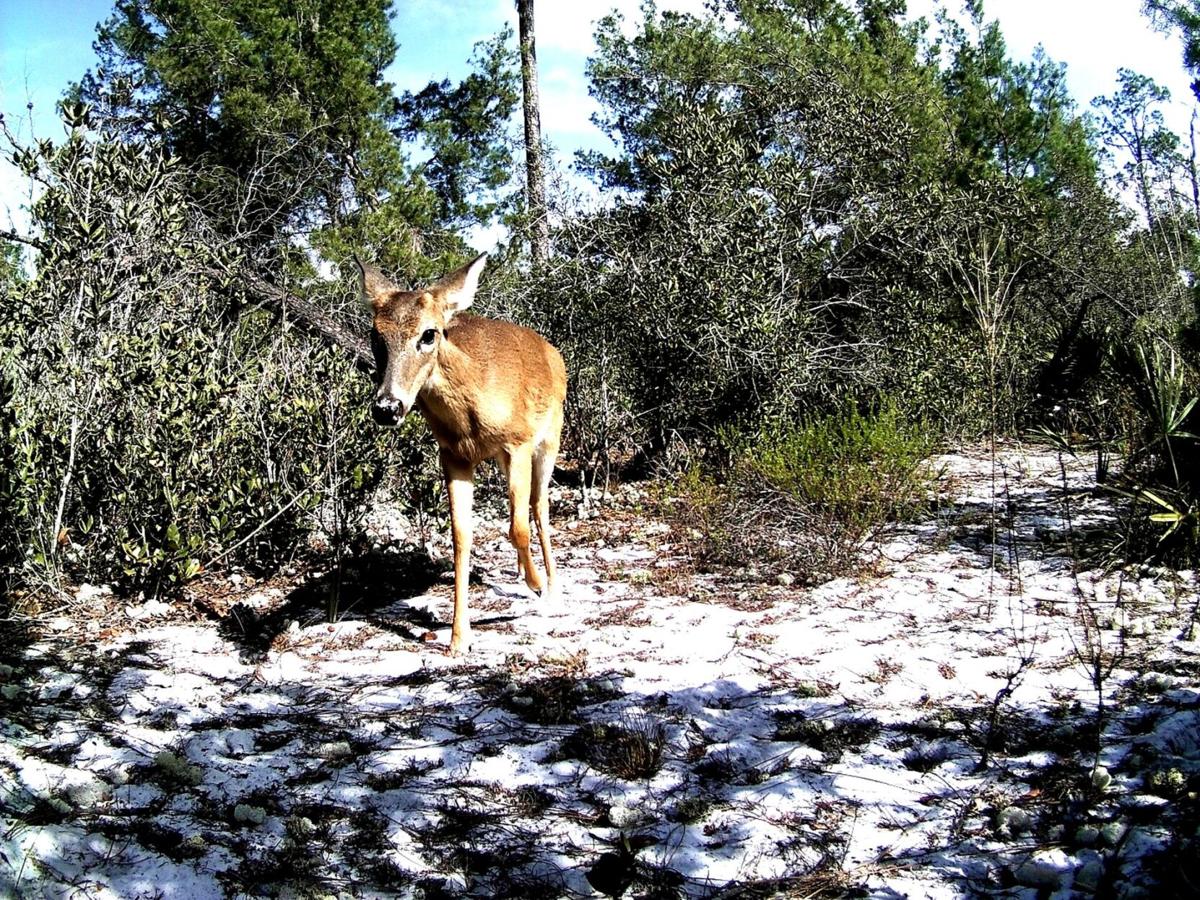 A white-tailed deer approaches the camera trap in January, 2020 on Red Hill. 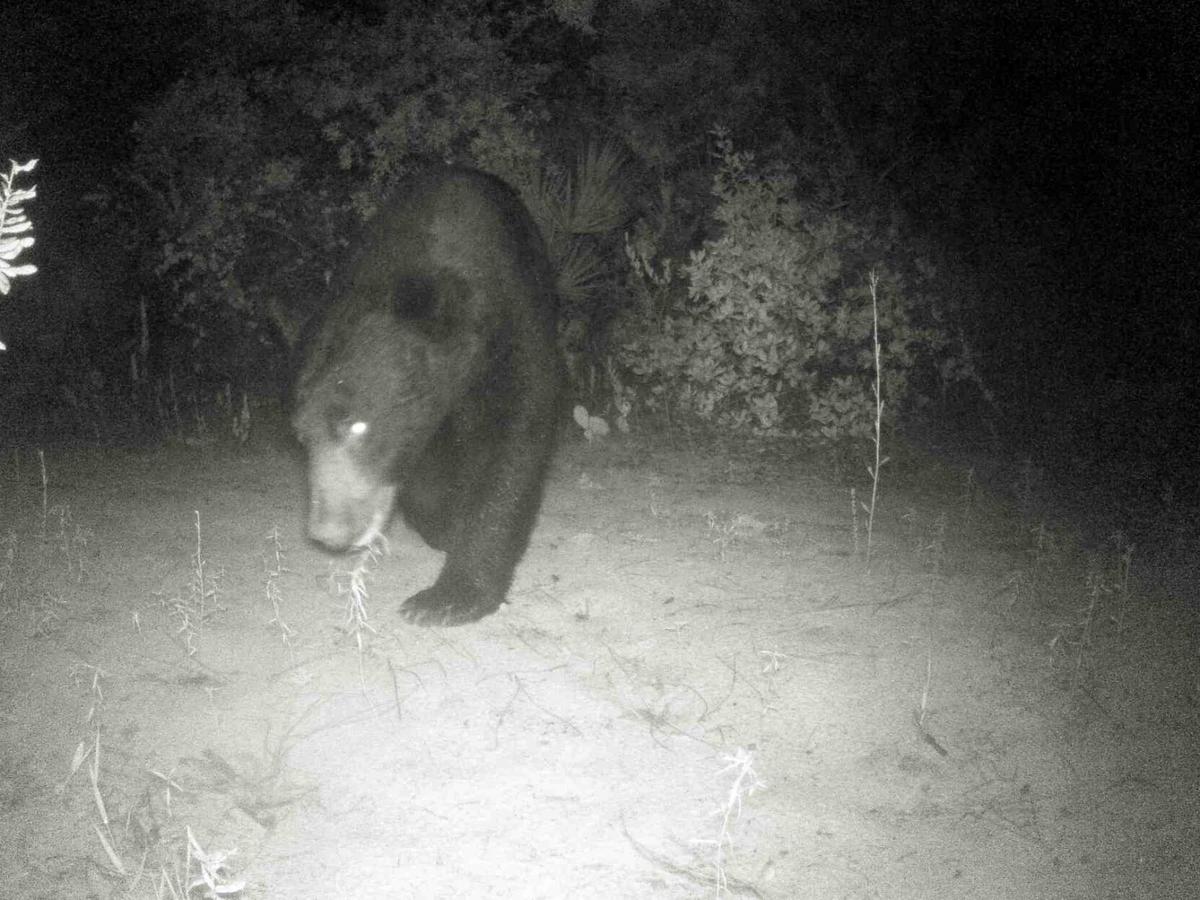 A curious Florida Black Bear visits the trail camera in July 2020, on the northeast portion of the Station.

A white-tailed deer approaches the camera trap in January, 2020 on Red Hill.

A curious Florida Black Bear visits the trail camera in July 2020, on the northeast portion of the Station.

If you have walked on one of the public trails at Archbold Biological Station, you’ve probably noticed one recurring theme: Sand! Bright, white, sugary sand. Sandy slopes, sandy depressions and sandy shoes (inside and out). Although deep sand may not be ideal for walking, it does create the canvas for something wonderful…animal tracks!

Wildlife is abundant at Archbold, although many species are rarely seen during the daytime. Each species’ unique tracks add their signature to the sand and sand does a great job of capturing them. Florida black bear, bobcat, coyote, gray fox, white-tailed deer, turkey, otter, gopher tortoise, Florida sand skink, opossum, armadillo, marsh rabbit, feral pig, mice, insects, and even Florida panther — you name it, and researchers can identify their tracks at Archbold. Even better, the scrub becomes a fresh blank canvas after every downpour of rain. With the current COVID shut-down human visitors aren’t currently able to access Archbold’s walking trails, but wildlife visitorBs are taking advantage of the empty trails.

In November 2019, Archbold Research Assistant Paul Ruben purchased a simple trail camera. He wanted something that was affordable, took quality photos and was waterproof. The latter proved challenging, as Ruben found later. Between November and February 2020, Ruben positioned his camera in an area of Archbold called Red Hill, an area of high scrubby sandhill. He recorded a group, or “rafter” of turkeys, a pair of Bobcats, a solitary Gray Fox, deer and a band of hunting coyotes. A trend was occurring.

Each week when he checked the camera, Ruben found not only cool pictures, but a story behind how wildlife behave when they are not in the presence of humans. Ruben remarked, “Most behaviors were obvious. For instance, predators like Bobcats move covertly, in a stalking or curious stature. Deer were also secretive, always on the fringe of the trail and ready to flee through brush, although less so than when I’ve seen them in person. Turkeys traveled in numbers for protection.” The most interesting observation was how some wildlife seemed to follow a routine. “What looked like the same Gray Fox would visit the camera multiple days in a row. Bobcats and Gray Foxes would share the same trail, separated only by an hour or so.” This was likely more dictated by the patterns of their prey, but Ruben found it was fun to watch nonetheless.

Unfortunately, in late February 2020 Ruben approached the camera to find moisture inside the body housing. He attempted to dry it out, but it seemed the seals had failed. He returned the camera and could not begin camera trapping again until June 2020.

Wildlife at Archbold became more active during the summer. Ruben regularly moved the new camera throughout the Station. In late June he caught only one sighting of a coyote and deer. So far in July he’s had observations of multiple bobcats, a coyote, opossum, armadillo, a Brown Thrasher (bird), and a feral pig. “On July 19, I was walking up to the trail camera and noticed large angled prints with five clearly defined toes, and most important, they were walking towards the camera!” exclaimed Ruben. “My excitement was justified when I viewed the captured photos and saw a Florida Black Bear.” A sighting of a bear in November 2019 at the Station was what originally inspired Paul to start camera trapping, so this moment brought his efforts full-circle.

So what’s next? According to Ruben, “a photo of a Florida Panther would be a great; I haven’t seen one in person. Archbold records intermittent panther tracks on site so it is possible. Our neighbors have photo records and a trail camera photo from here would be valuable to better understand the panther movements as they range further north.” Ruben says he will continue to document these sightings, even if it is just for fun.

Ruben takes a lot of joy thinking about the best places for wildlife photos and the background scenery of each location. “Every time I check the camera it feels like I’m opening up a present. You never know what you might see. Archbold’s Station and adjacent Reserve total 8,840 acres: that’s enough space for many of Florida’s wide-ranging nocturnal animals to survive. We have a lot to learn about these elusive animals and what I am recording can help build the knowledge to improve the quality of their lives.”