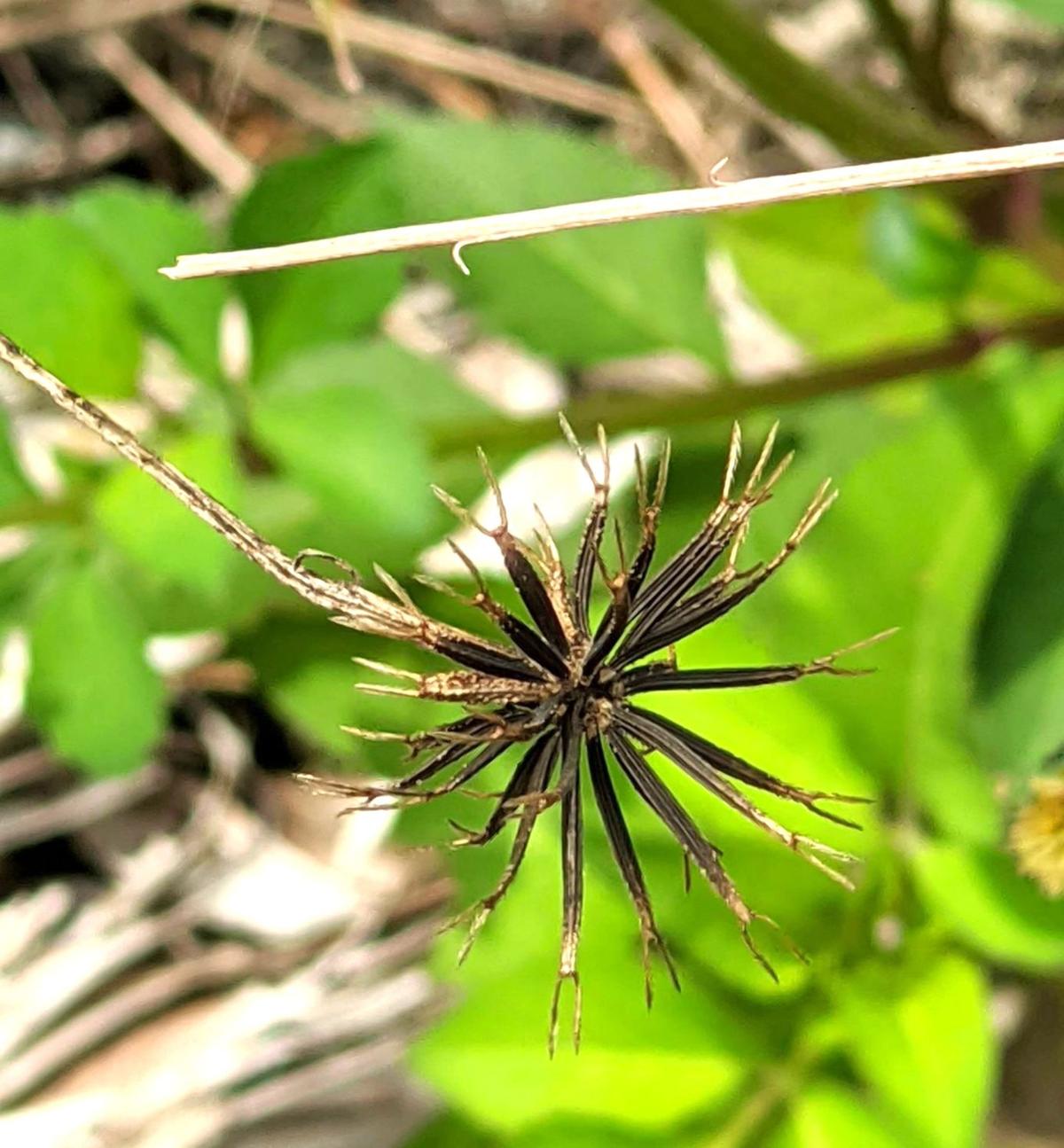 A beggar-tick seed head ready to disperse its seeds. 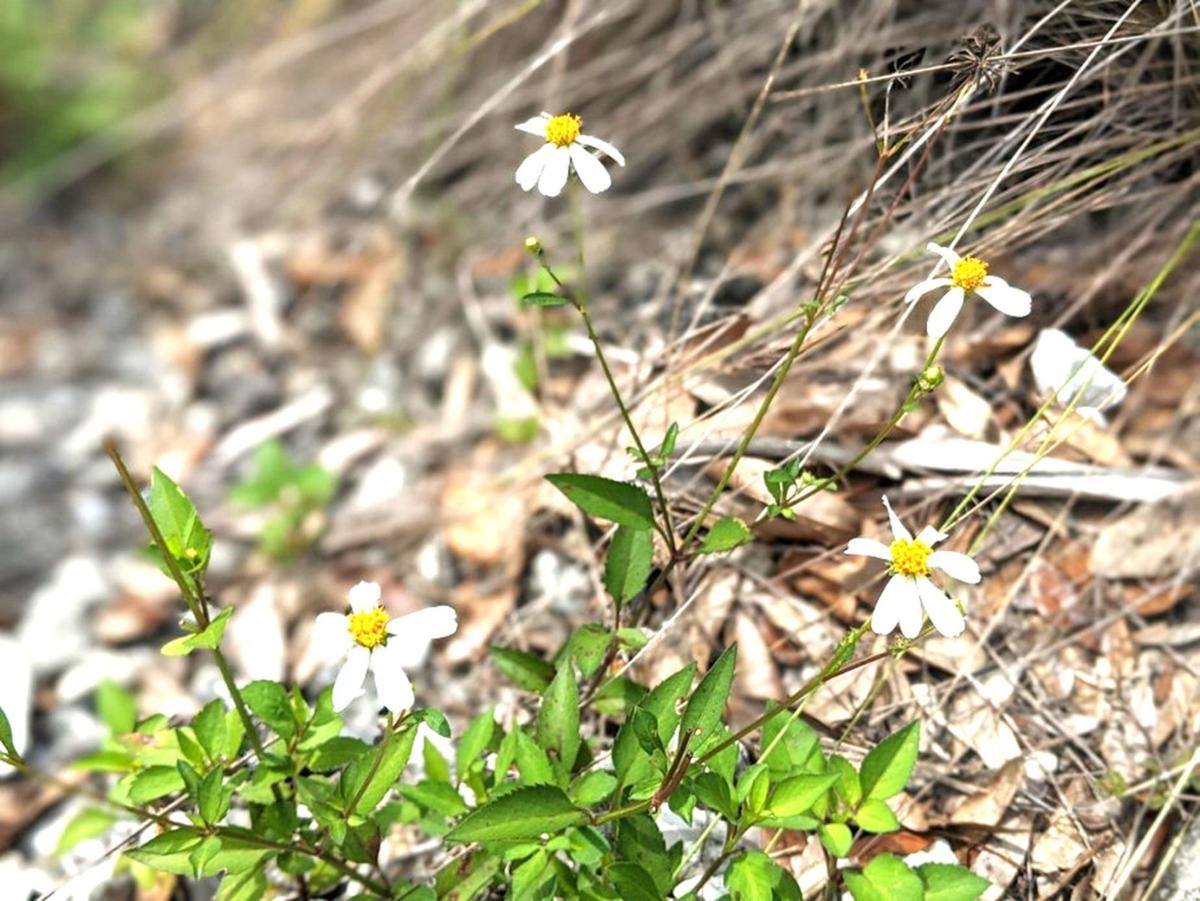 A beggar-tick seed head ready to disperse its seeds.

Highlands County gardeners are all too familiar with beggar-ticks and their daisy-like flowers that turn into annoying seed heads. Its seeds have two sharp points that can cling by the hundreds to socks or pants legs, but an even worse fault is that it can quickly overwhelm a garden. Along dry roadsides beggar-ticks are modest, attractive, two-foot plants persistently in bloom even during droughts. In a well-watered, fertile garden, however, this plant can morph into a six-foot monster with inch-thick stems and deeply embedded roots.

Like many local residents, Archbold Biological Station entomologist Mark Deyrup is currently working at home. When tired of peering through his microscope he takes gardening breaks; yanking up young beggar-ticks is a primary chore. While weeding, he noticed that beggar-tick leaves are aromatic, with a somewhat camphor-like fragrance. Intrigued, he Googled beggar-tick, using its scientific name, Bidens alba. It turns out that beggar-tick tea is used in traditional medicines throughout the tropics in response to a wide range of ailments from allergies to cancer.

The active chemical composition of supposedly medicinal plants is a hot topic in chemistry, so Deyrup called his son Stephen, who is a natural products chemist at Siena College, Albany, New York. Stephen located a scientific publication listing a whopping 301 ‘biologically active’ compounds found in beggar-ticks. Some of these, says Stephen, “I would not want to put in my body.” The bottom line is that none of the medicinal virtues purported for beggar-ticks have been validated in clinical trials. This is not unusual in the field of traditional botanical medicine because it is difficult to get standardized doses of particular plants, and trials with human patients are appropriately regulated.

Among the less worrisome chemicals of beggar-ticks are terpenes, including pinene and camphene (hence the camphor smell). Terpenes, such as limonene in citrus, are often attractive to humans, but repellant to most insects. Plants with high concentrations of terpenes are usually protected from most leaf-eating insects but attacked by certain specialized insects that are resistant to specific terpenes. Deyrup wondered if beggar-ticks might be attacked by an unusual group of specialized insects.

To test this idea, Deyrup collected samples of beggar-tick flowers and young seed heads from plants found growing all around the buildings of Archbold Biological Station. Samples were placed on paper towels in plastic freezer bags ventilated with many tiny holes made with a sewing pin. The bags were hung with clothespins on curtains in the Deyrup home. “Some scientific research in its preliminary stages is totally low-tech,” remarks Deyrup.

Within a few days insects began to emerge. Over about six weeks a successive series of flower head samples have produced one species of moth, five species of flies, and seven species of small wasps that probably attack the moths or flies. “Here’s the thing,” says Deyrup, “the insects of the Archbold Biological Station have been studied by various scientists for over 65 years. Thousands of species of insects are known to live on the Station, but six of the species found on the beggar-ticks had never been seen here.” The abundance of beggar-tick plants right next to the insect research lab makes this even more surprising.

At the Archbold Biological Station insects have been vigorously surveyed by several methods: light traps at night, different kinds of fine netting traps, soil extractions, water traps on the ground, watching for insects on flowers, and sweeping insect nets through vegetation or aquatic habitats. A good many insect species, however, may be missed by entomologists depending on such techniques because they spend their lives hidden in some special location where nobody is looking. “The medicinal value of beggar-tick plants remains unclear,” says Deyrup, “but for me they have warded off complacency about the depth of my entomological knowledge after 37 years of research at the Archbold Biological Station. Many generations of biologists will be enlivened by exploring the secrets of the natural world.”