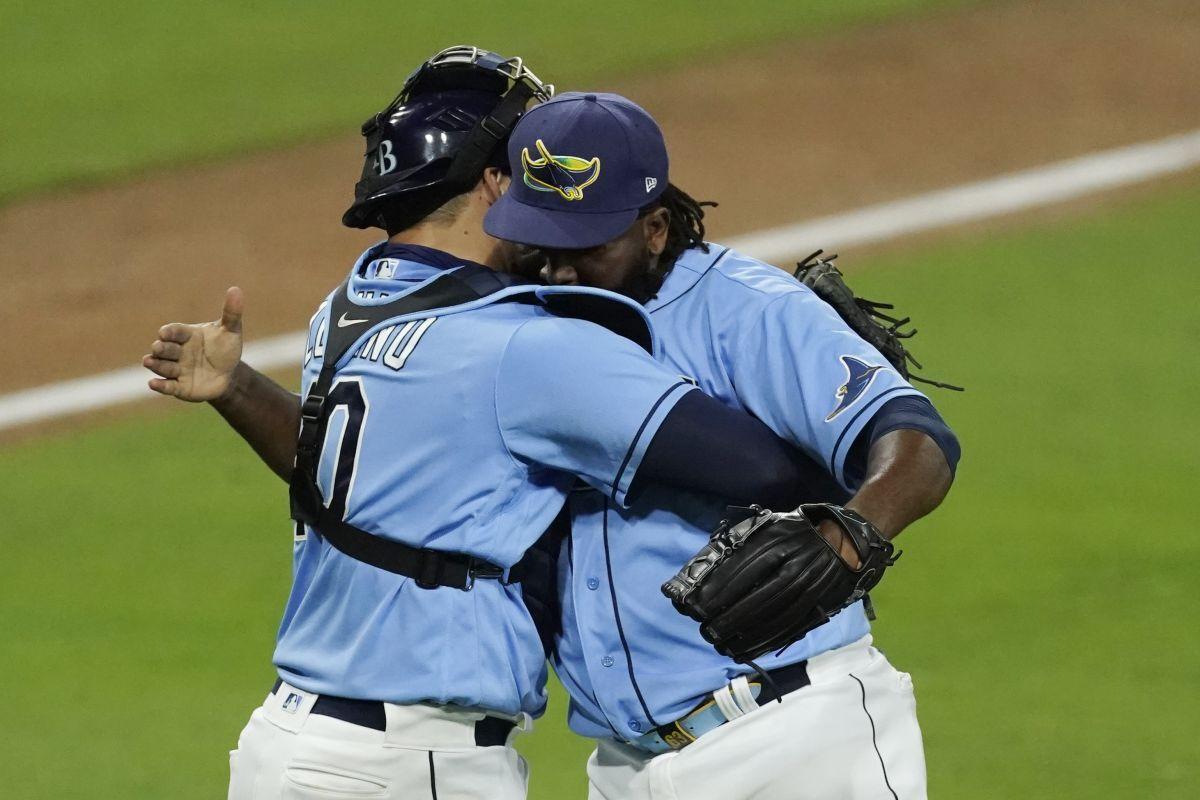 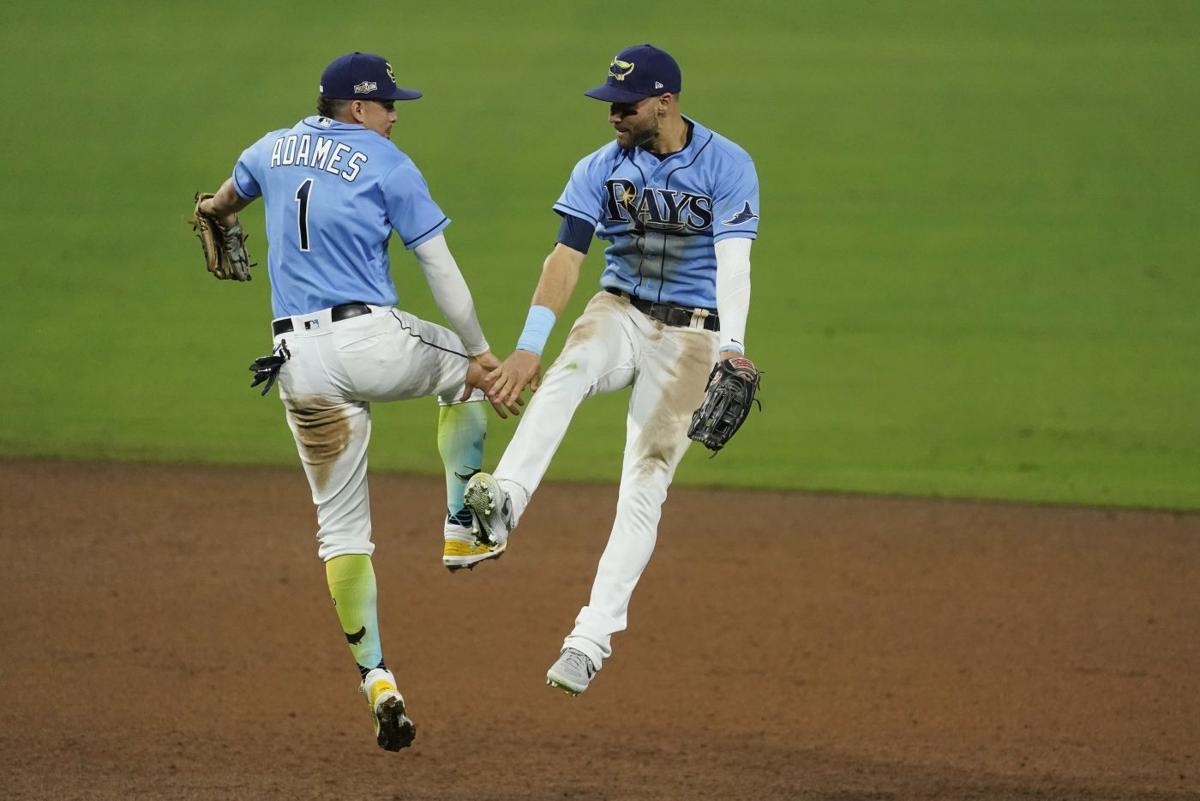 SAN DIEGO — Tampa Bay reliever Diego Castillo played catch Sunday afternoon, less than 48 hours after throwing 29 pitches in two innings, and told manager Kevin Cash he was good to go for the opener of the AL Championship Series against Houston.

“It’s always good news when you get thumbs up,” Cash said after Castillo got out of an inherited bases-loaded situation with one pitch and finished the five-out save to help the Rays beat the Astros 2-1 Sunday night.

Randy Arozarena homered again at Petco Park, Mike Zunino drove in the go-ahead run and Blake Snell settled down for the win after allowing José Altuve’s homer in the first inning.

The play of the game, though, was when Castillo came on with one out in the eighth and threw one pitch, getting Yuli Gurriel to ground into a double play. Aaron Loup had loaded the bases on a hit batter, walk and single.

Castillo had thrown 29 pitches Friday night in the 2-1 win against the New York Yankees that clinched the AL Division Series. Cash didn’t know until Sunday afternoon if the burly 26-year-old would be OK to pitch that night.

“I was going to be ready,” Castillo said through a translator. “I knew with the day off yesterday, I came to the stadium prepared. I just came ready to pitch.”

Tampa has leaned on its bullpen all season.

“I think the job he did sums up his whole year,” said Zunino, the catcher. “He stepped up big for us. He’s been throwing a lot in big situations for us. We had an idea who we might be able to go to, but him coming in there showing what he’s made out of says a lot about what those guys in the bullpen have done for us all year.”

Cash called it “Just a remarkable performance. We really benefited with the double play ball on one pitch. ... I’m just so appreciative of his effort the way he’s able to bounce back and make these filthy pitches to unbelievable hitters.”

Cash has a bullpen full of guys who want the ball.

“It’s impressive. That’s what you want as a staff,” Cash said. “We’re going to keep hoping they want it.”

“Everybody in the dugout knew he was going to get at least a sacrifice fly or a base hit,” manager Dusty Baker said. “It’s driving him crazy because he’s not used to struggling like this. We’ve just got to keep believing in Yuli.”

Game 2 is Monday afternoon when the Rays turn to 36-year-old Charlie Morton, who got the win for Houston in Game 7 when it won the 2017 World Series. Houston counters with Lance McCullers Jr., who started that Game 7 for the Astros.

Houston, which got into the playoffs with a 29-31 record, is in the ALCS for the fourth straight season and is trying to advance to the World Series for the third time in that span.

The Astros are villains in many people’s eyes for their sign-stealing scandal three years ago, when they beat the Los Angeles Dodgers in the World Series. They also remain unapologetic.

Tampa Bay is trying to reach its second World Series after losing to the Philadelphia Phillies in 2008.

“They’ve got a lot of weapons over there where they can mix and match, and we tried to keep the right-handed side of their lineup in there tonight, which we did,” Baker said. “Everything went according to plan tonight, other than winning the game.”

Zunino singled past diving shortstop Carlos Correa to bring in Willy Adames with the go-ahead run with two outs in the fifth off lefty Framber Valdéz. Adames reached on a leadoff walk and advanced on consecutive ground outs to Valdéz.

Arozarena continued his breakout postseason with his fourth homer in six games, sending a 1-2 pitch from Valdez to center field with one out in the fourth to tie it at 1. He homered in each of the first three games of the AL Division Series against the New York Yankees, also in San Diego.

Nicknamed “The Cuban Rocket,” Arozarena defected to Mexico in 2015 and signed as a free agent with the St. Louis Cardinals in 2016. He made his big league debut last year and was traded to the Rays in the offseason.

He tested positive for COVID-19 during intake testing prior to summer camp and didn’t make his 2020 season debut until Aug. 30.

The only Rays with more homers in a postseason are Melvin Upton Jr. with seven and Evan Longoria six, both in 2008.

Altuve homered in his third straight game, driving a 2-1 pitch from Snell to left with one out in the first.

Snell allowed one run and six hits in five innings, struck out two and walked two.

“They have a great team, great pitching staff and they made the pitches when they need to,” Houston’s Alex Bregman said. “Looking forward to playing more baseball. This is fun. I love playing at this ballpark. It’s fun. Weather is amazing. Just felt good to be out there. Really fun to play baseball today.”

Monday’s game: The Rays received a three-run home run from Manuel Margot in the bottom of the first and held a 4-1 lead over Houston in the 8th inning. The game was completed after press time.