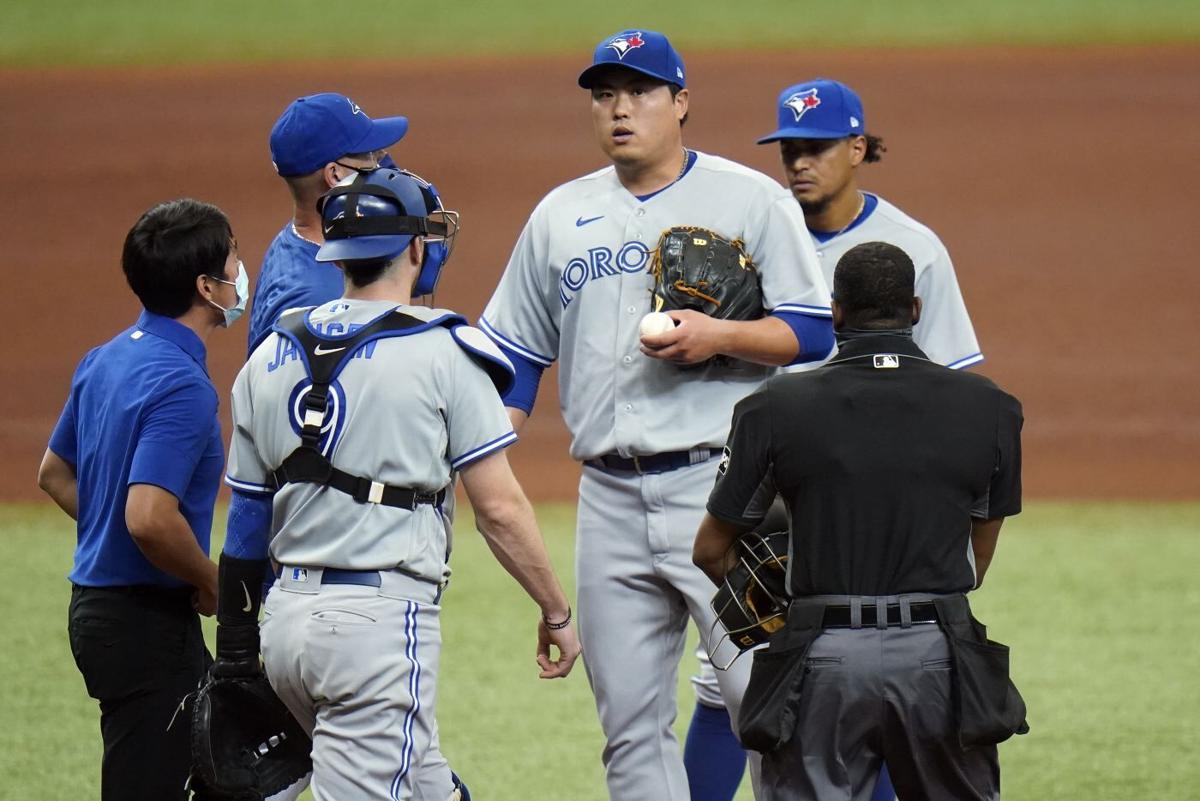 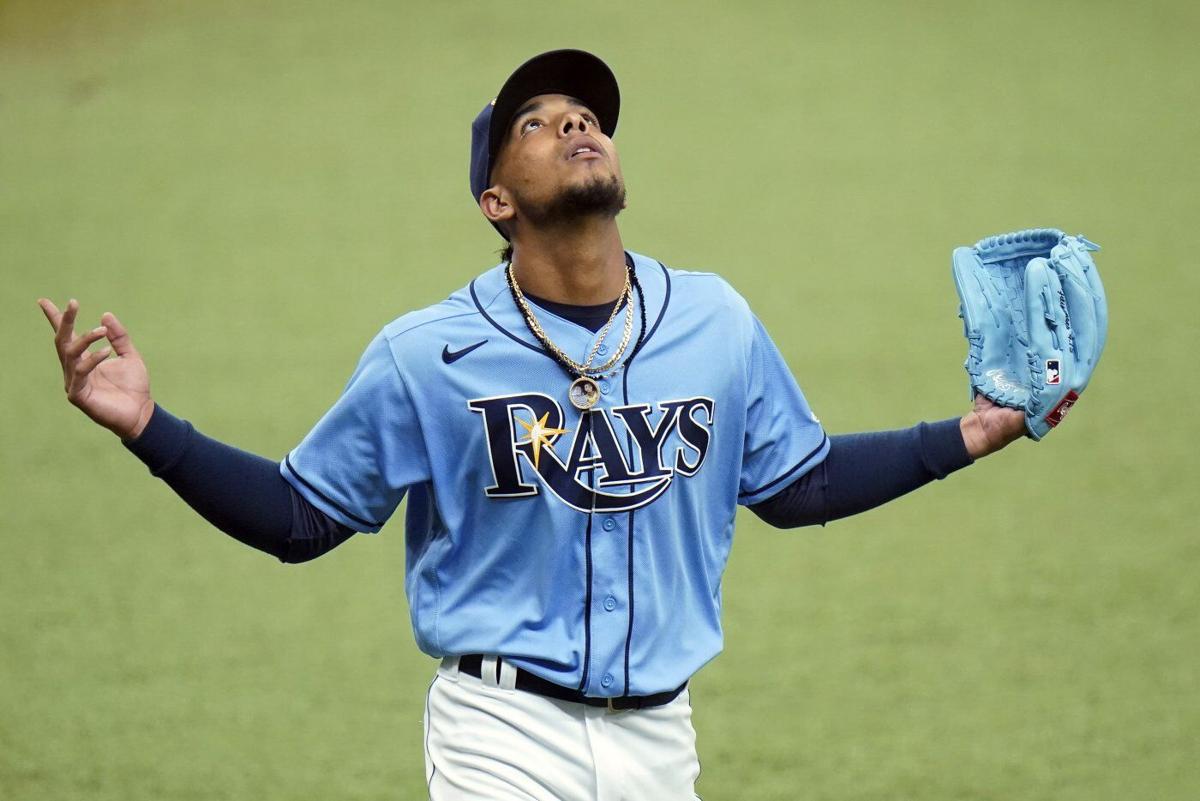 Tampa Bay Rays opening pitcher Luis Patino reacts as he is relieved by manager Kevin Cash during the third inning of a baseball game against the Toronto Blue Jays Sunday, April 25, 2021, in St. Petersburg. 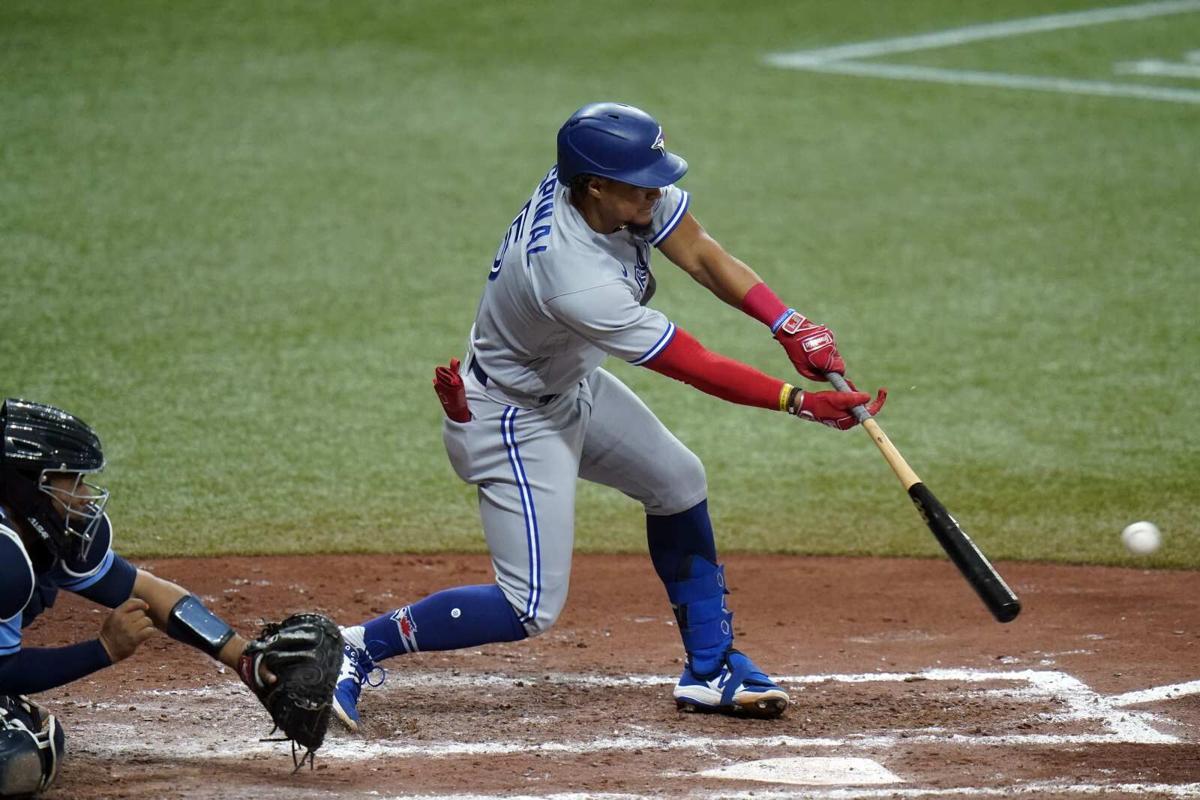 Tampa Bay Rays opening pitcher Luis Patino reacts as he is relieved by manager Kevin Cash during the third inning of a baseball game against the Toronto Blue Jays Sunday, April 25, 2021, in St. Petersburg.

Ryu gave up three hits and struck out five in 3 2/3 innings, but exited with right glute injury after giving up a single to Manuel Margot.

Ryu, through an interpreter, said the problem is “nothing serious.”

But all the in-game maneuvering had a smiling Montoyo saying that his “brain was fried.”

“There was no room for error,” Montoyo said of the bullpen. “They did a great job”

Tim Mayza (1-0) followed Ryu and got the final out in the fourth. He gave up two singles in the fifth — the last hits for the Rays — and was replaced by Tyler Chatwood, who worked out of the jam.

Rafael Dolis got four outs to get his second save.

Totonto lowered its ERA from 3.20 to 3.04, which is the best in team history through the first 21 games of a season.

The Rays had a baserunner in every inning but the first and ninth. Tampa Bay has lost five of six at home.

Fleming avoided further damage by striking out Bo Bichette with the bases loaded to end the inning.

Rays opener Luis Patiño walked Cavan Biggio leading off the first on a nine-pitch at-bat and then combined with Fleming to retire the next 12 batters.

Tampa Bay reliever Louis Head made his major league debut at 31 and worked a perfect eighth by retiring Bichette, Vladimir Guerrero Jr. and Randal Grichuk The right-hander was added to the roster from the alternate site Friday on his birthday.

Head’s wife was at the game.

After not pitching last year because the minor leagues were shut down and unsure about his future, Head spent four month selling solar panels door to door in Arizona,

Toronto catcher Danny Jansen hit a couple balls hard but went 0 for 4 and is hitless in a career-long 31 at-bats.

Patiño, acquired in the December trade that sent LHP Blake Snell to San Diego, made his Tampa Bay debut and pitched for the first time as a big leaguer in front of his parents — Carlos Patiño and Zulema Arzuza — who flew in from Colombia. He struck out three and walked one in 2 2/3 hitless innings.

Blue Jays: Montoyo is optimistic that OF George Springer (quadriceps) will be ready to make his season debut on Tuesday. Springer and Teoscar Hernández (COVID-19) were scheduled to play in alternate camp game Sunday.

Rays: 1B Yandy Díaz remained in the game after getting hit by a pitch above the wrist in the eighth inning.

Blue Jays: Make a 35-minute trip north to start a five-game homestand at TD Ballpark in Dunedin, Florida, on Tuesday night against Washington and RHP Max Scherzer (1-1). Toronto will counter with a bullpen day. It is the second homestand at Toronto’s spring training complex, where the Blue Jays are playing through at least May.

Rays: LHP Rich Hill (1-0) will face Oakland tonight. The Athletics had a 13-game winning streak end Sunday at Baltimore. Hill, who has given up eight runs and 11 hits over 6 ⅓ innings in his previous two outings, has been working on concealing his pitch selection from base runners on second. “I’ve been making adjustments with my glove,” Hill said. “They can see the grip on the pitch. It doesn’t serve a great purpose for me if they have some idea what’s coming.”