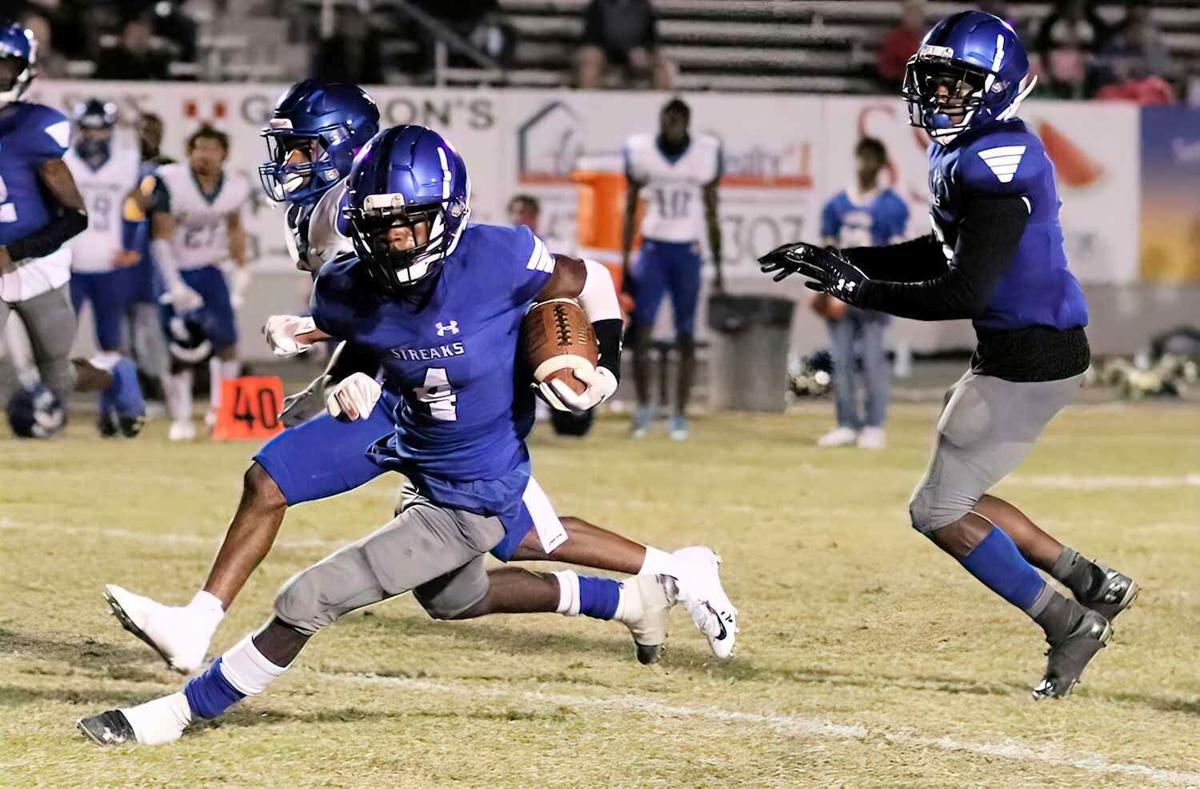 Sebring’s Caden Dunlap (4) makes a cut as he returns an interception back into Gibbs territory. 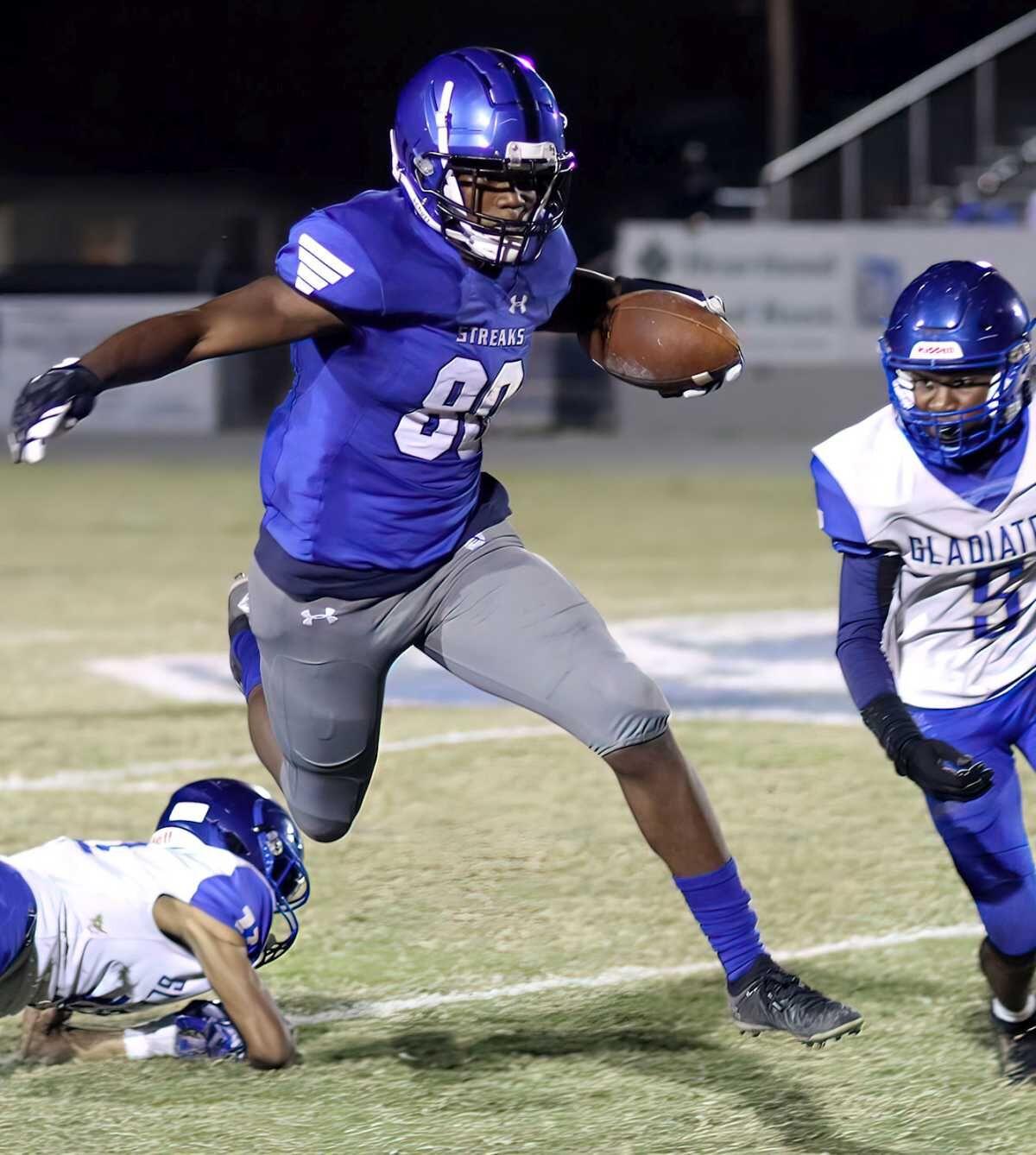 Sebring’s Quentin X Joiner (80) leaps past one defender on his way to a 28-yard pickup for a first down. 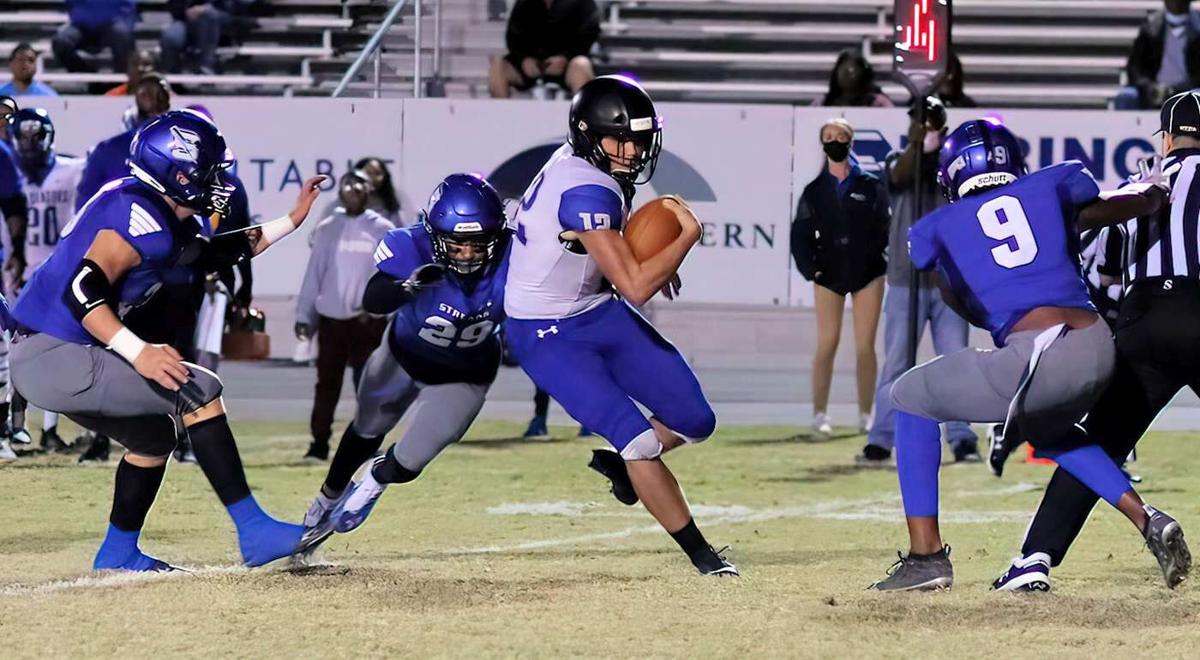 Sebring’s Kadin Baker (33), Joshua Carter (29) and Josiah Taylor (9) surround the Gibbs quarterback and get the sack. 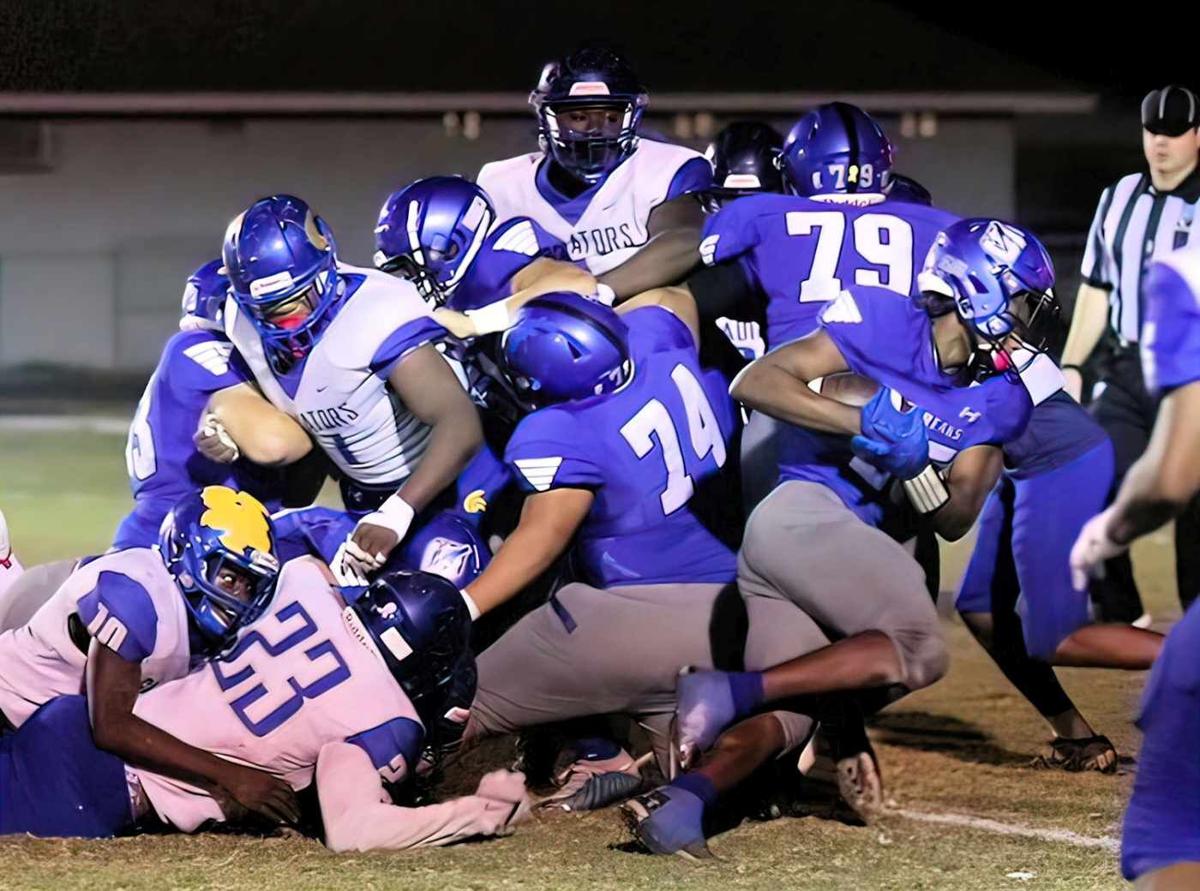 Sebring’s Travis Kerney (25) goes to the right of the pileup for a 2-yard touchdown run. 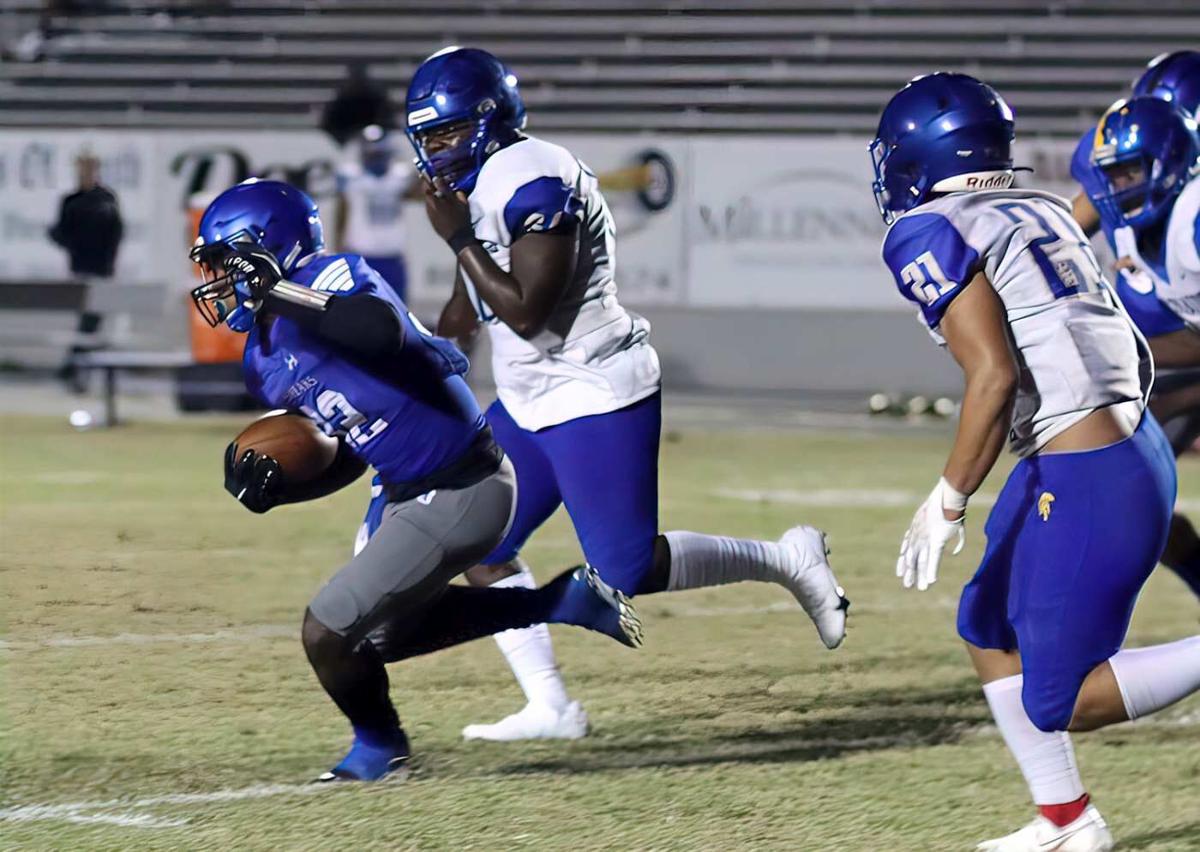 Sebring’s Frederick Hankerson (32) breaks through the line to pick-up yardage.

Sebring’s Caden Dunlap (4) makes a cut as he returns an interception back into Gibbs territory.

Sebring’s Quentin X Joiner (80) leaps past one defender on his way to a 28-yard pickup for a first down.

Sebring’s Kadin Baker (33), Joshua Carter (29) and Josiah Taylor (9) surround the Gibbs quarterback and get the sack.

Sebring’s Travis Kerney (25) goes to the right of the pileup for a 2-yard touchdown run.

Sebring’s Frederick Hankerson (32) breaks through the line to pick-up yardage.

SEBRING — The Sebring Blue Streaks football team overcame two turnovers in their first four offensive plays to soundly beat the Gibbs Gladiators 29-0 Friday Night at Firemen’s Field in Sebring in the Class 5A Regional Semifinals to advance to next Friday’s Regional Championship game.

“It feels good,” said Sebring Head Coach LaVaar Scott. “It was not always pretty, especially offensively, but we got it done and the defense played a heck of a game.”

Despite the score, Scott was not particularly happy with the offense.

“Our offense has a tendency to start slow and then we got in our own way,” he said. “A receiver was supposed to run this route or the back was supposed to line up on the other side, we were just off tonight offensively.”

The Sebring offense came to a dead stop on the first play from scrimmage on an attempted screen pass that was not caught, ruled a lateral on the field and recovered by Gibbs on the Sebring 32.

The Sebring defense stopped the Gladiators and forced a punt after three plays.

The Blue Streak defense was tested again when Sebring lost a fumble on their next possession and the Gladiators recovered the ball on Sebring’s 16. Again, the defense held off the threat and forced a turnover on downs.

The third time became the charm for the Sebring offense as they pieced together a 10-play, 53-yard drive to the Gladiator 29, seven of those runs by Frederick Hankerson for 30 yards before Jean Carlos Sanchez booted a 46-yard field goal to give the Blue Streaks a 3-0 first quarter lead.

Defense ruled the rest of the first quarter and most of the second as the Blue Streaks forced two turnovers. The first, a fumble recovery by CJ Dale, and the second an interception by Eli Bertrand was returned to the Gladiators 46.

Sebring ran the ball eight straight times, Travis Kerney carrying the load seven times and Hankerson scoring on a 7-yard run as Sebring went into the half with a 9-0 lead.

Offense was nonexistent in the third quarter as punting the ball became the norm until two minutes left in the third when Caden Dunlap picked off a Gladiator pass and returned it back to Gibbs 18-yard line that changed the complexity of the game.

Four plays got the Blue Streaks to the 5 and ready to kick a field goal to start the fourth. Then three penalties on Gibbs took the points off the board and gave Sebring a 4th-and-goal at the 2. Sebring decided to go for it and Kerney made it pay off with a 2-yard touchdown run to expand Sebring’s lead to 15-0 to start the fourth.

Sebring scored on their next two possessions, the first on a 24-yard screen pass from Cam Kimbrell to Ke’varreis White as Sebring held a commanding 22-0 lead with nine minutes left in the game.

Sebring basically finished the game on their next time-consuming drive in which they took nearly six minutes off the clock with Hankerson capping off the drive with an 11-yard run with less than two minutes left in the game to make the final score 29-0.

Scott noted that they did not make any real adjustments at the half: “They were giving us the pass, but we wanted to establish the run and eventually went to the pass.”

Scott did heap praise on the defense, especially for posting back-to-back shutouts in the playoffs against teams that have scored 40 plus points several times during the year.

Sebring will travel this Friday to play the Clearwater Tornadoes (11-1) for the 5A Regional Championship.