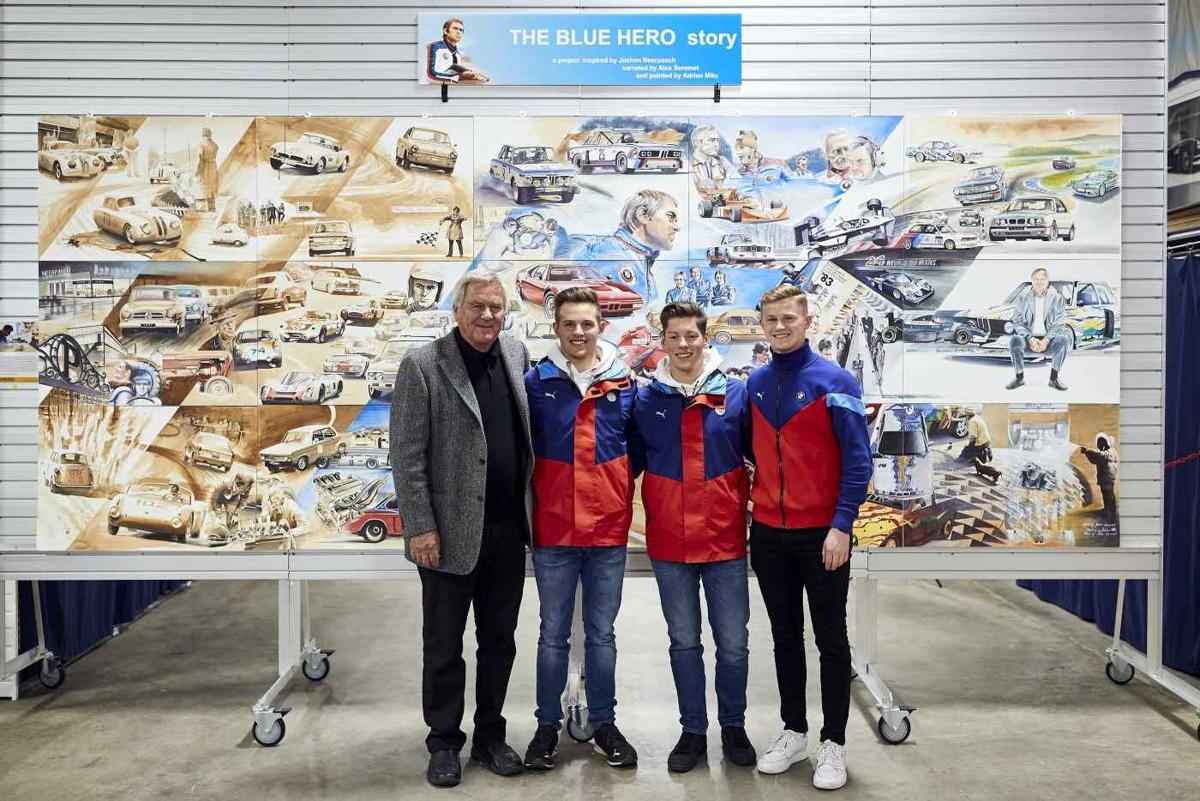 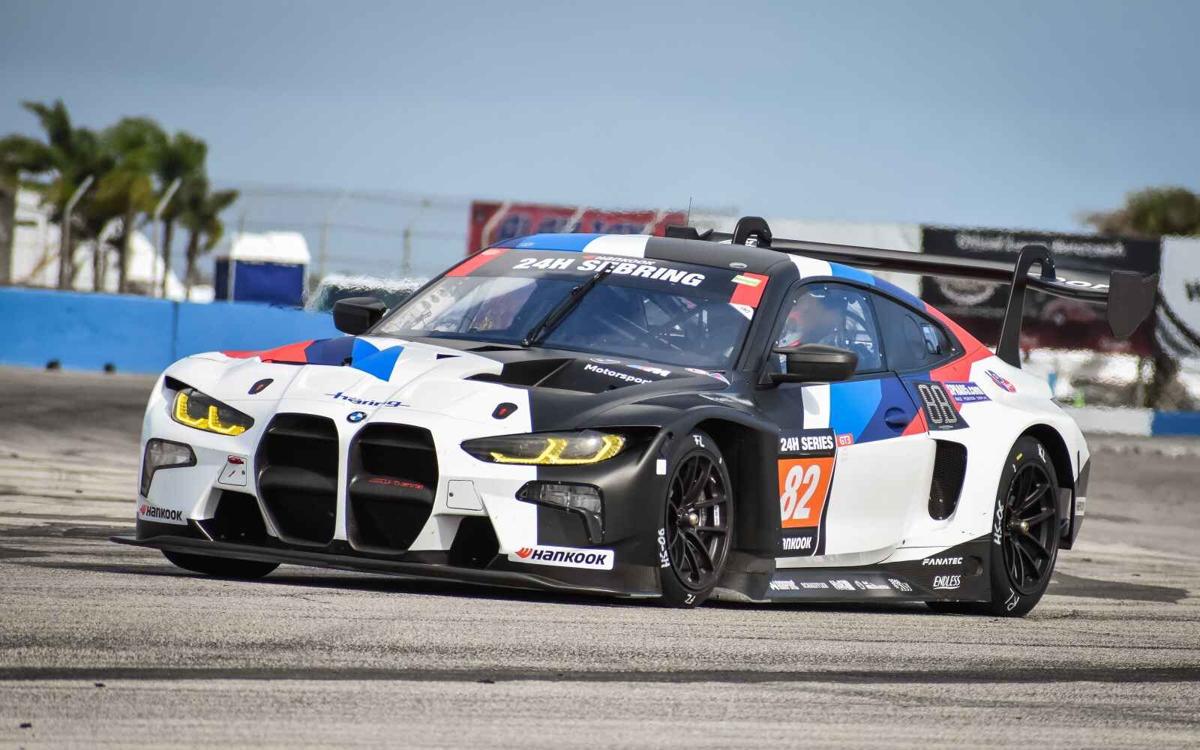 The No. 82 BMW M4 GT3 races at Sebring International Raceway. 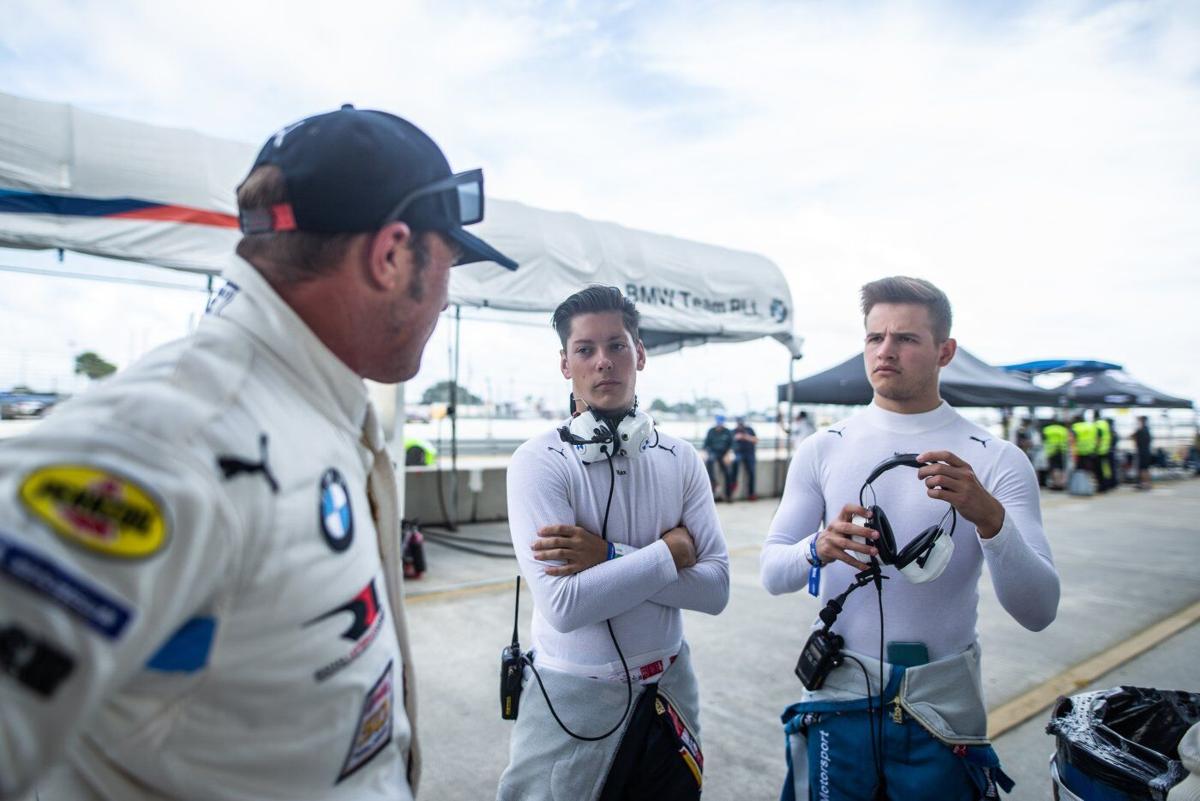 The No. 82 BMW M4 GT3 races at Sebring International Raceway.

SEBRING — BMW M Motorsport and the BMW Junior Team ended two eventful weeks in North America with the 24H SEBRING. Dan Harper, Max Hesse and Neil Verhagen started with a visit to BMW Team RLL at Petit Le Mans. This was followed by a tour of the BMW Group plant in Spartanburg, S.C., a trip to see Verhagen’s family at their home and then the test race with the new BMW M4 GT3 at Sebring International Raceway, where Hesse and Verhagen competed alongside US drivers Bill Auberlen, Robby Foley and James Clay. The race in the Creventic 24H SERIES served as the final test for the new car at one of the toughest circuits in the world. BMW M Motorsport also used the weekend to hand over the new BMW M4 GT3 from the test crew at BMW Team RMG to the North American teams.

For Harper, Hesse and Verhagen, the USA trip began at the season finale of the IMSA WeatherTech SportsCar Championship, where they accompanied the BMW works drivers and BMW Team RLL all weekend, attended important meetings and experienced the processes in a BMW M Motorsports works program at first hand. “We learned an awful lot in the collaboration with BMW Team RLL and the BMW works drivers,” said Hesse. “Plus, it was nice to be involved in the farewell race for the BMW M8 GTE and sample the atmosphere at Road Atlanta.”

This was followed by a trip to the largest BMW Group plant in the world, in Spartanburg, where the BMW Junior Team gained first-hand insights into the production of BMW X models. “As we are representing BMW as drivers, it was cool for us to see how production works in the largest plant in the world in Spartanburg,” said Verhagen. “It is huge, and we only saw a small part of it. Hopefully, we will return sometime and check out some other areas. It was really fascinating.”

Harper, Hesse and Verhagen, together with their mentor Jochen Neerpasch, who accompanied the BMW Junior Team throughout the entire trip, then visited the BMW Car Club of America Foundation, which possesses a fascinating exhibition of vintage BMW vehicles and other BMW collectibles. A special wall drawing was dedicated to the motorsport history of Jochen Neerpasch. The group saw out the evening with a barbecue with Verhagen’s family, who live in Mooresville, N.C., less than two hours from Spartanburg.

For Neerpasch and the Juniors, the trip to the USA marked the end of two years together. “So far, the guys have exceeded the expectations we had of them at the start, which were pretty high anyway,” said Neerpasch. “All that they are missing is experience. They are already setting lap times like those of the top drivers. They need more race outings, and they are sure to get them next season.”

Harper was also positive in his appraisal of his time as a BMW Junior so far: “We have come a long way since the first NLS race almost two years ago. It is incredible how much we have learned in that time – both as racing drivers and as people. Our training is hard, but it is paying dividends. I think our results in the BMW M6 GT3 this season have proved that.”

Last weekend was all about the BMW M4 GT3 – not only for the BMW Junior Team, but also for BMW M Motorsport. The 24H SEBRING was the final endurance test for the car, before it goes in search of victories and titles from January 2022. When it does so, it will be in the hands of private BMW M Motorsport teams, some of which are based in North America.

For this reason, BMW M Motorsport took the opportunity at Sebring to hand over the BMW M4 GT3 from the test crew, BMW Team RMG, to the US teams, who will run the car in the coming season. Engineers and mechanics from BMW Teams RMG and RLL worked together for the outing at Sebring. The Turner Motorsport and BimmerWorld Racing teams were also involved with drivers Bill Auberlen, Robby Foley and James Clay and gained valuable experience with the new car.

Foley said: “A fantastic car. You can immediately feel the two years of development that have been invested in the BMW M4 GT3. The systems in the interior, with which the driver works, are a big step forward compared to the BMW M6 GT3. The car is very user-friendly.”

This was backed up by Clay, who was driving a GT3 race car for the first time in Sebring: “Given that the BMW M4 GT3 is far faster than the GT4 cars I have driven previously, I found it very easy to adapt to the car, as the car is very well thought out and easy to operate. I was able to focus fully on the driving.”

The BMW M4 GT3 will contest its first race in the hands of BMW M Motorsport teams in January 2022, at the 24 Hours of Dubai (UAE). This will be followed by the 24 Hours of Daytona (USA) at the end of the month. The detailed race program for the BMW Junior Team will be announced at a later date.