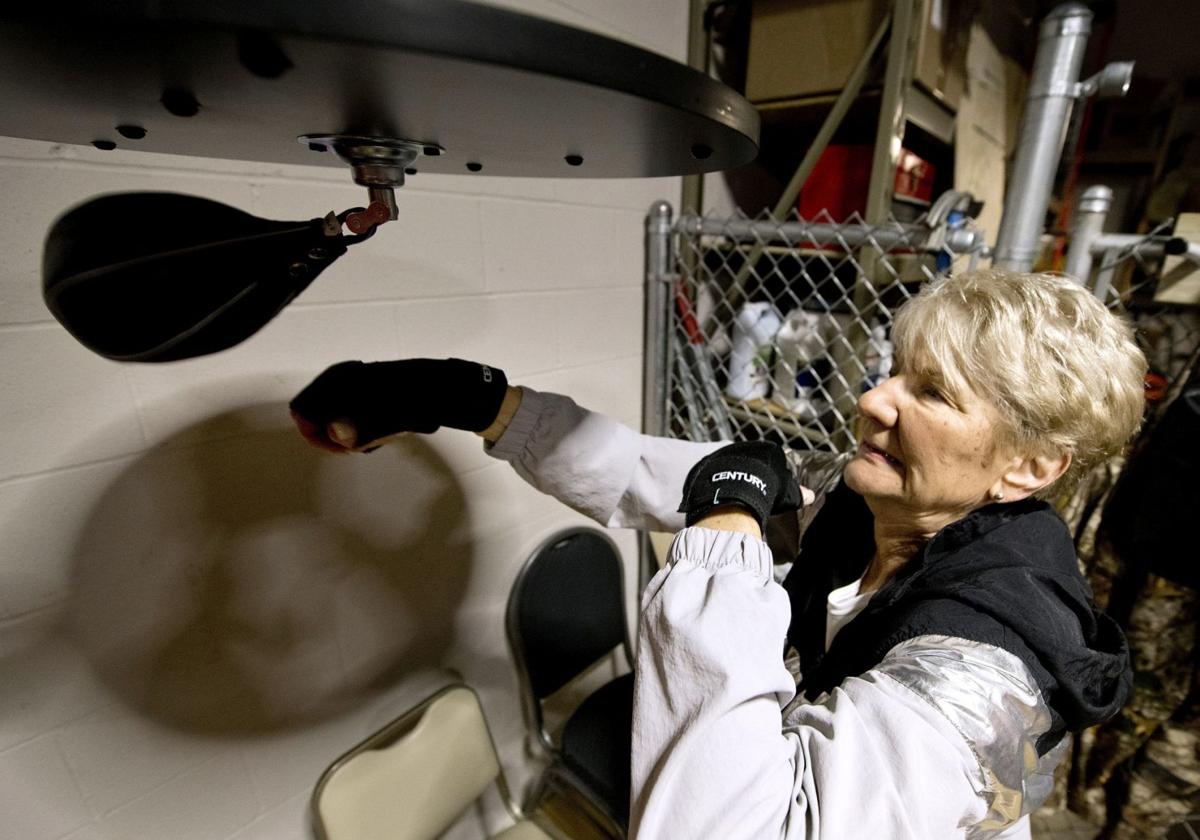 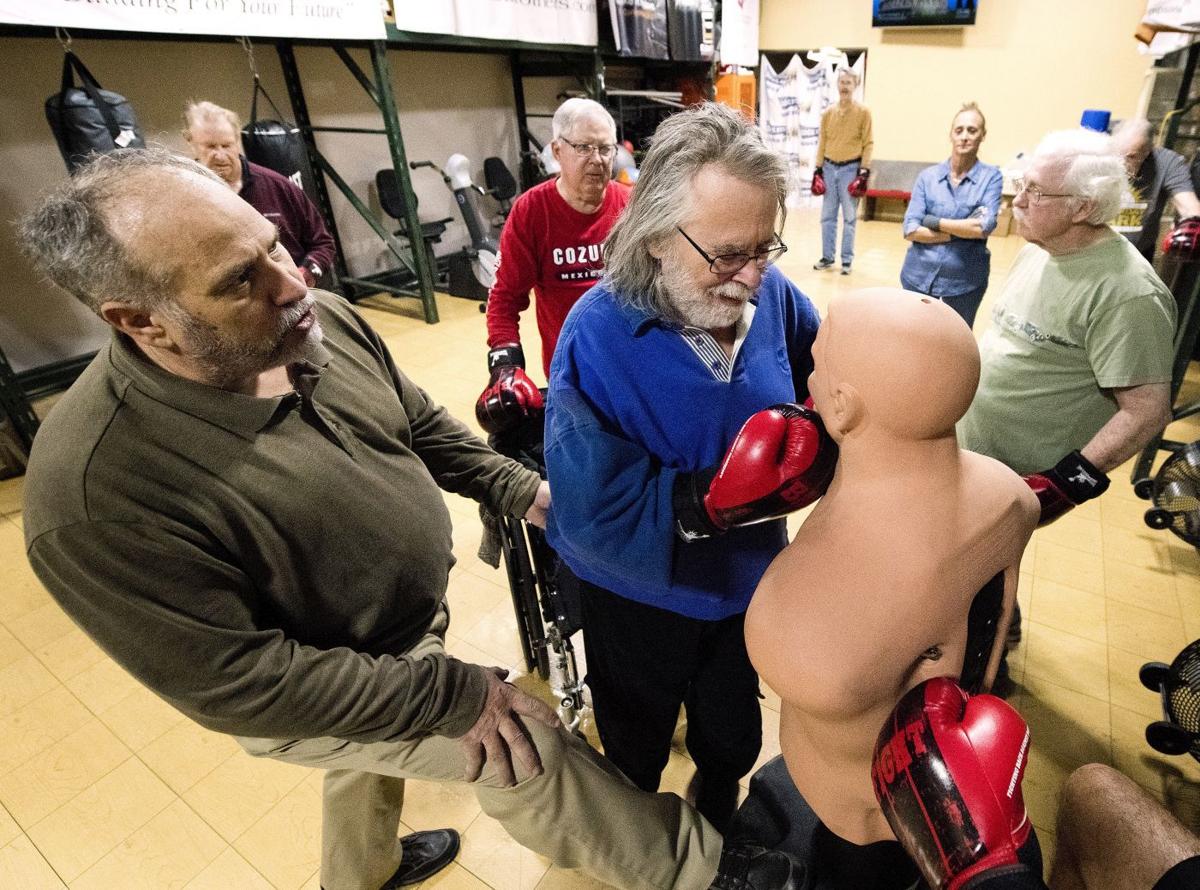 Terry Coughling hits a dummy as Pat Tomscha, left, and class members gather around him during a Rock Steady Boxing class adapted for people with Parkinson’s Disease held Thursday, Dec. 5, 2019.

Terry Coughling hits a dummy as Pat Tomscha, left, and class members gather around him during a Rock Steady Boxing class adapted for people with Parkinson’s Disease held Thursday, Dec. 5, 2019.

IOUX CITY, Iowa — The silver fabric on Nyla Hamm-Schreiber’s jacket gleamed as she punished a punching dummy with jabs, hooks and upper cuts Thursday morning at the Siouxland Center for Active Generations.

Then, the 78-year-old Dakota Dunes woman, who was slightly out of breath, stopped swinging her fists and unexpectedly planted a kiss on the mannequin’s head. The group of 10 other participants and a few onlookers that were gathered around her erupted in laughter.

“My doctor did tell me he could tell a great deal of difference in the strength in my legs,” said Hamm-Schreiber, who has been participating in Rock Steady Boxing, a non-combat boxing program for people with Parkinson’s disease.

According to the Sioux City Journal, the program seeks to empower people with Parkinson’s by improving their quality of life through training used by boxing pros that has been specially adapted for them. Rock Steady Boxing, which began being offered at the Siouxland Center for Active Generations roughly two months ago, involves stretching, bicycling, running, jump-roping, push-ups, balancing and lots of boxing.

Tomscha said it is estimated that more than 500 Siouxlanders have Parkinson’s. He hopes Rock Steady Boxing can make a difference in some of their lives. Research indicates that the program, which was developed in Indianapolis, Indiana, over the course of seven years, can help participants control their symptoms and improve their balance and mobility.

“Sioux City has a rich history of boxing. Many of these people who have Parkinson’s, either their father boxed in the service, or they were around boxing growing up in Sioux City,” Tomscha said. “I think that history’s still here with some of that generation, but I think more importantly, they’re really trying to improve their independence.”

Mary Tordsen first learned about Rock Steady Boxing from Parkinson’s-related Facebook pages. The comments the 70-year-old Sioux City woman read about the program were overwhelmingly positive. Tordsen regularly scoured the Internet in hopes of finding a local Rock Steady Boxing program. One day, a search turned up a newly forming program at the Siouxland Center for Active Generations. Tordsen, who fondly recalled her father boxing in a 10-foot square in her family’s backyard when she was a child, immediately fired off an email to Tomscha asking, “When do you start?”

Tordsen said she’s “a little speedier” since she began attending the one-hour sessions, which are held on Tuesdays and Thursdays. On Thursday, she was giving her brain and her voice a workout, as well as her body. As she jabbed a black punching bag with her red boxing gloves, Tordsen suddenly shouted, “Giraffe.” A few moments prior, Tomscha had asked the participants to name an animal as they doled out hits.

“What you’re trying to do is to get your brain to go while you’re exercising,” Tordsen explained. “What you lose are the automatic movements, so, a lot of times, you have to think about putting your foot in front of the other one.”

Even though he feels like a “wet rag” after Rock Steady Boxing, 83-year-old David Silverberg, of Sioux City, said the program is “pretty terrific.” Four years ago, Silverberg’s wife, Mary Ellen, saw a segment about Rock Steady Boxing on the show “60 Minutes.”

“I called around and there was nothing offered in the area. It was offered all around except in Sioux City,” said Silverberg, who said she contacted local gyms and doctor’s offices to see if anyone would be interested in forming a Rock Steady Boxing affiliate location. “(Tomscha) was the only one who stepped up and said, ‘Yeah, we can do that.’”