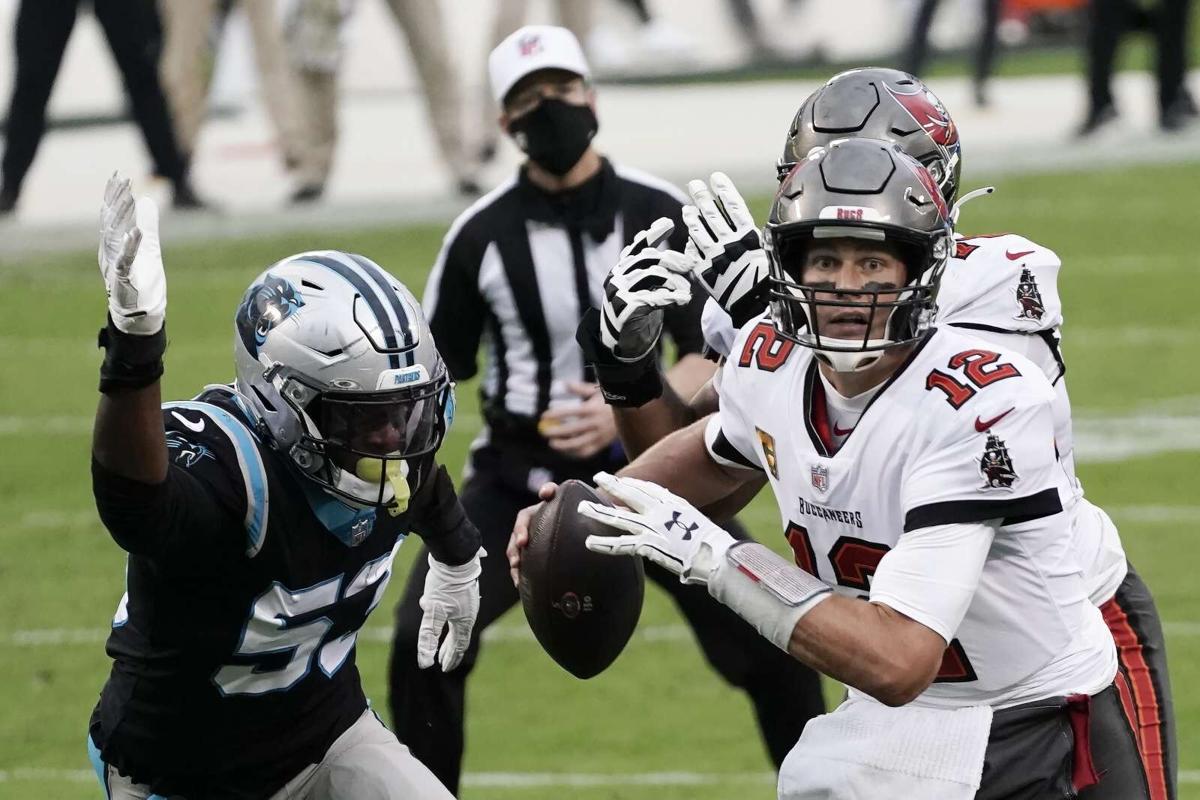 Tampa Bay Buccaneers quarterback Tom Brady (12) runs out of the pocket against Carolina Panthers defensive end Brian Burns (53) during the second half of an NFL football game, Sunday, Nov. 15, 2020, in Charlotte , N.C. 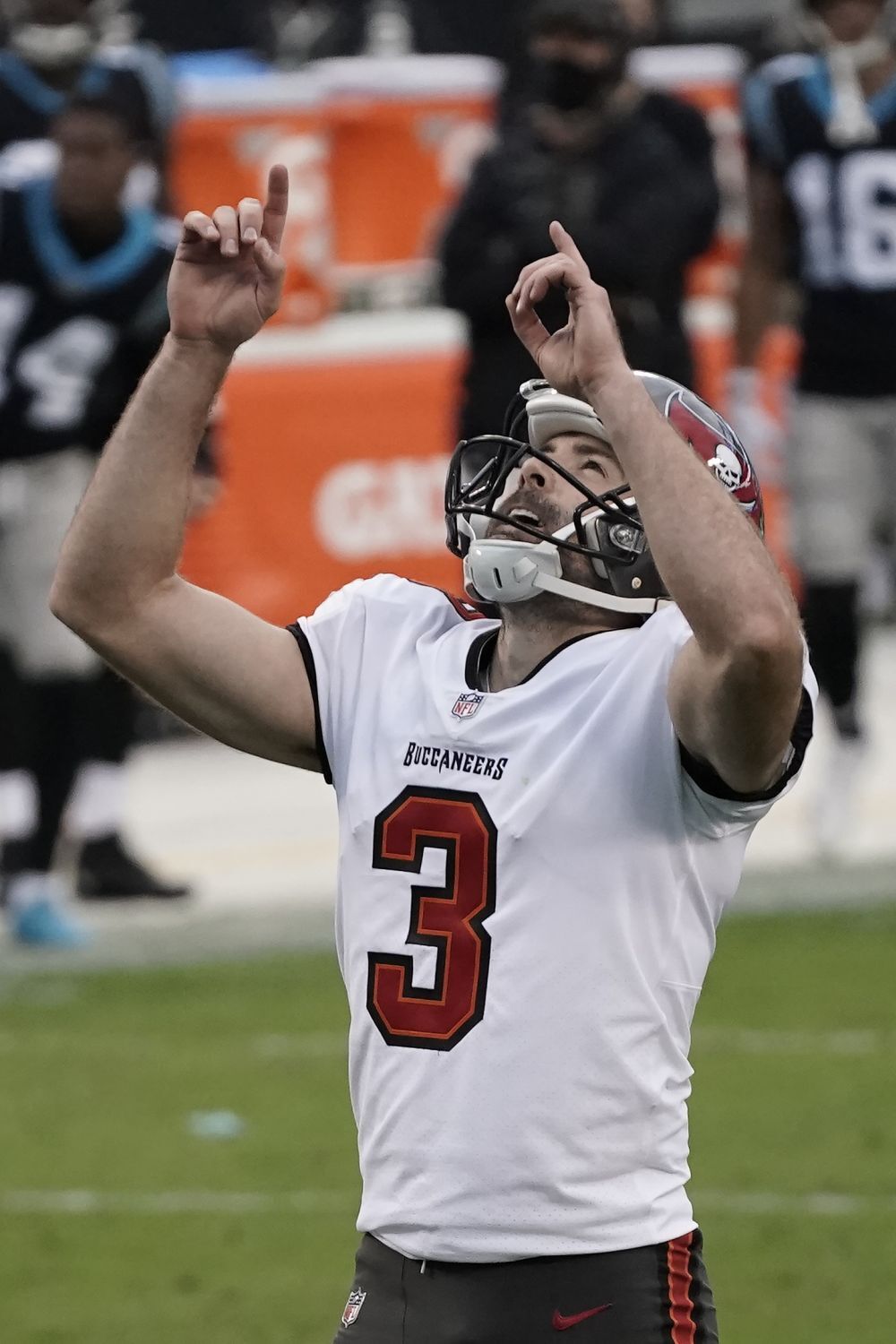 Tampa Bay Buccaneers kicker Ryan Succop (3) celebrates his field goal against the Carolina Panthers during the second half of an NFL football game, Sunday, Nov. 15, 2020, in Charlotte , N.C. 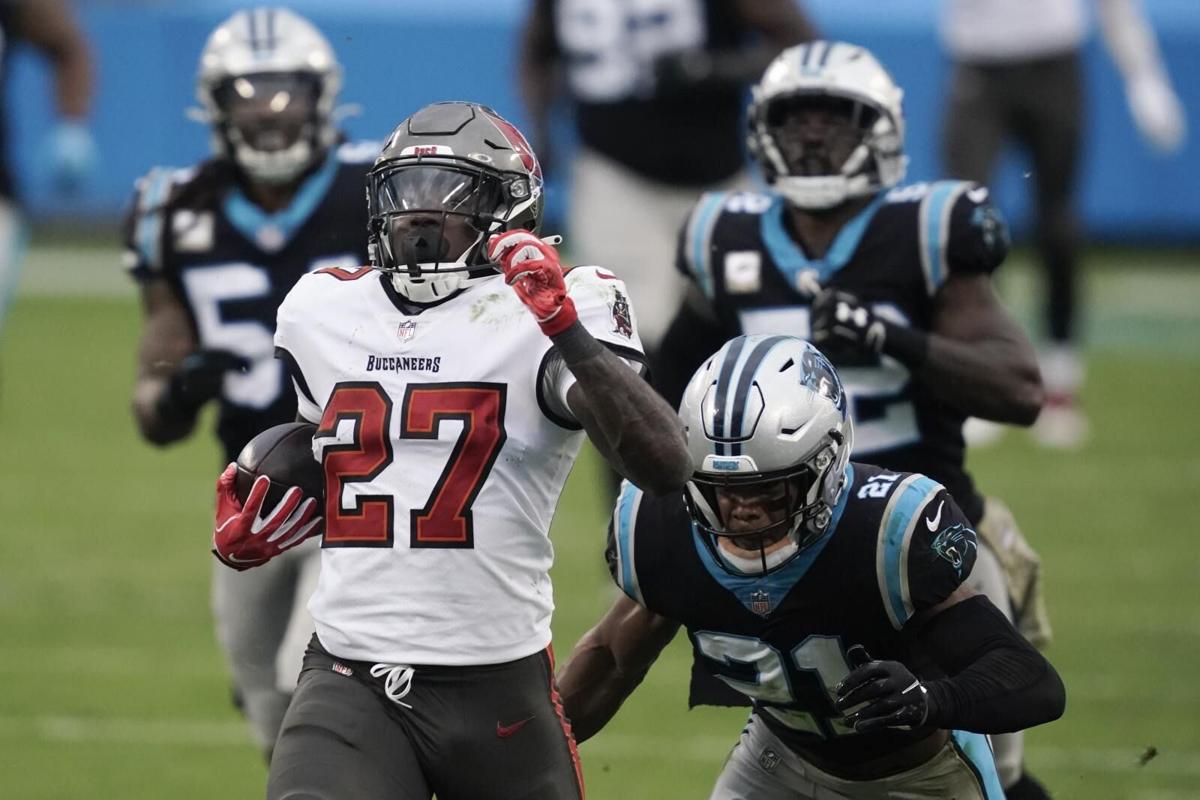 Tampa Bay Buccaneers running back Ronald Jones (27) runs for a 98-yard touchdown against the Carolina Panthers during the second half of an NFL football game, Sunday, Nov. 15, 2020, in Charlotte , N.C.

Tampa Bay Buccaneers quarterback Tom Brady (12) runs out of the pocket against Carolina Panthers defensive end Brian Burns (53) during the second half of an NFL football game, Sunday, Nov. 15, 2020, in Charlotte , N.C.

Tampa Bay Buccaneers kicker Ryan Succop (3) celebrates his field goal against the Carolina Panthers during the second half of an NFL football game, Sunday, Nov. 15, 2020, in Charlotte , N.C.

Tampa Bay Buccaneers running back Ronald Jones (27) runs for a 98-yard touchdown against the Carolina Panthers during the second half of an NFL football game, Sunday, Nov. 15, 2020, in Charlotte , N.C.

CHARLOTTE, N.C. — Tom Brady threw for 341 yards and was involved in four touchdowns, Ronald Jones had a franchise-record 98-yard touchdown run, and the Tampa Bay Buccaneers bounced back from a dreadful defeat with a resounding 46-23 win over the Carolina Panthers on Sunday.

Coming off the most lopsided loss of his illustrious career — a 38-3 defeat to the Saints — Brady threw touchdown passes to Cameron Brate, Mike Evans and Rob Gronkowski, then ran for another score in the fourth quarter to seal the win.

Jones’ run in the third quarter broke open a tight game. He raced up the middle behind left guard, shook off safety Tre Boston and was gone. Jones finished with a career-high 181 yards and became the fourth NFL player with a TD run of 98 yards or longer, joining Tony Dorsett, Derrick Henry and Ahman Green.

Chris Godwin had 92 yards receiving for the Buccaneers (7-3), who swept the season series and handed the Panthers (3-7) their fifth straight loss.

The Buccaneers arrived in Charlotte just before midnight Saturday after their team plane was delayed 6 1/2 hours because of mechanical issues. Jones fumbled on the team’s second play from scrimmage, leading to a Carolina touchdown. But Brady and company regrouped and was dominant the rest of the way scoring on nine straight possessions against a helpless Panthers defense.

Teddy Bridgewater threw for two touchdowns and ran for another before leaving in the fourth quarter with a right knee injury. P.J. Walker finished up at quarterback.

Despite the Bucs scoring a season-high 46 points, Brady was far from perfect.

The six-time Super Bowl champion missed open receivers on deep balls on three occasions, including his old buddy Gronkowski. Gronk was running alone down the middle of the field midway through the third quarter only to have the ball sail helplessly over his head. Earlier, Brady missed chances to hook up on long potential TD passes with Antonio Brown and Evans.

Rodgers put the Packers (7-2) ahead for good with 9:11 left by throwing a 6-yard TD pass to Davante Adams, who had left with an ankle injury earlier in the second half. Rodgers also had a 5-yard touchdown run and a 78-yard scoring strike to Marquez Valdes-Scantling, who caught four passes for a career-high 149 yards.

Keelan Cole scored on a franchise-record 91-yard punt return and a 12-yard reception for Jacksonville (1-8), which lost its eighth straight. Jacksonville’s James Robinson rushed for 109 yards on 23 carries.

Cole became the first Jaguar ever to score on a punt return and a reception in the same game, as well as the first player from any team ever to accomplish that feat against the Packers..

Green Bay entered the game as a two-touchdown favorite but had enough breakdowns to give Jacksonville hope. The Jaguars rallied from a 17-10 halftime deficit by scoring 10 points off turnovers in the second half.

DETROIT — Matt Prater made a 59-yard field goal as time expired. Matthew Stafford threw two of his three touchdown passes in the first half and directed the winning drive with just 16 seconds left. Rookie defensive end Chase Young was called for roughing the passer, giving Detroit the ball at midfield. Stafford threw a 9-yard pass to Marvin Jones to set up the kick.

The Lions (4-5) won at home for the first time in more than a year after building a 14-point lead at halftime and going ahead 24-3 midway through the third quarter.

Washington (2-7) pulled into a tie by scoring touchdowns on three straight series in the second half in Alex Smith’s first start in nearly two years. But its defense could not stop Stafford when it mattered most.

The Giants improved to 3-7 under first-year coach Joe Judge with their second straight win, snapping an eight-game losing streak against Philly. The Eagles (3-5-1) still lead the NFL’s worst division, the NFC East. Dallas and Washington are each 2-7.

Carson Wentz and the rest of Philadelphia’s offense were out of sync following a bye. They were 0 for 9 on third downs. Boston Scott had a 56-yard TD run early in the third quarter but the Eagles couldn’t get closer.

Jones ran untouched 34 yards for a score to cap a well-executed 85-yard drive to start the game, and the Giants led the entire game. It was similar to Jones’ 80-yard run against Philadelphia in a 22-21 loss on Oct. 22 except he didn’t stumble at the 8 this time.

Jones finished with 64 yards rushing and the Giants had 151 on the ground.

CLEVELAND — Nick Chubb returned from a stint on injured reserve and scored a touchdown early in the fourth quarter — topping 100 yards rushing along with teammate Kareem Hunt.

Chubb reeled off a 59-yard run with 1:07 left and then smartly ran out of bounds at the 2-yard line instead of scoring so the Texans, who were out of timeouts, wouldn’t get the ball back. Chubb finished with 126 yards on 19 carries in nasty weather. Hunt finished with 104 yards, including 37 yards — and three first downs — on Cleveland’s final drive as the Browns (6-3) ran out the clock.

With the Browns up 3-0 on a day when passing was almost impossible, Chubb, playing for the first time since Oct. 4, took a handoff on the right, cut left and ran past Texans defensive end J.J. Watt as Cleveland finally found the end zone to go up 10-0.

Deshaun Watson’s 16-yard TD pass to Pharaoh Brown with 4:59 left pulled the Texans (2-7) within three, but Hunt pounded away after the Browns were backed up at their 3 after a muffed kickoff.