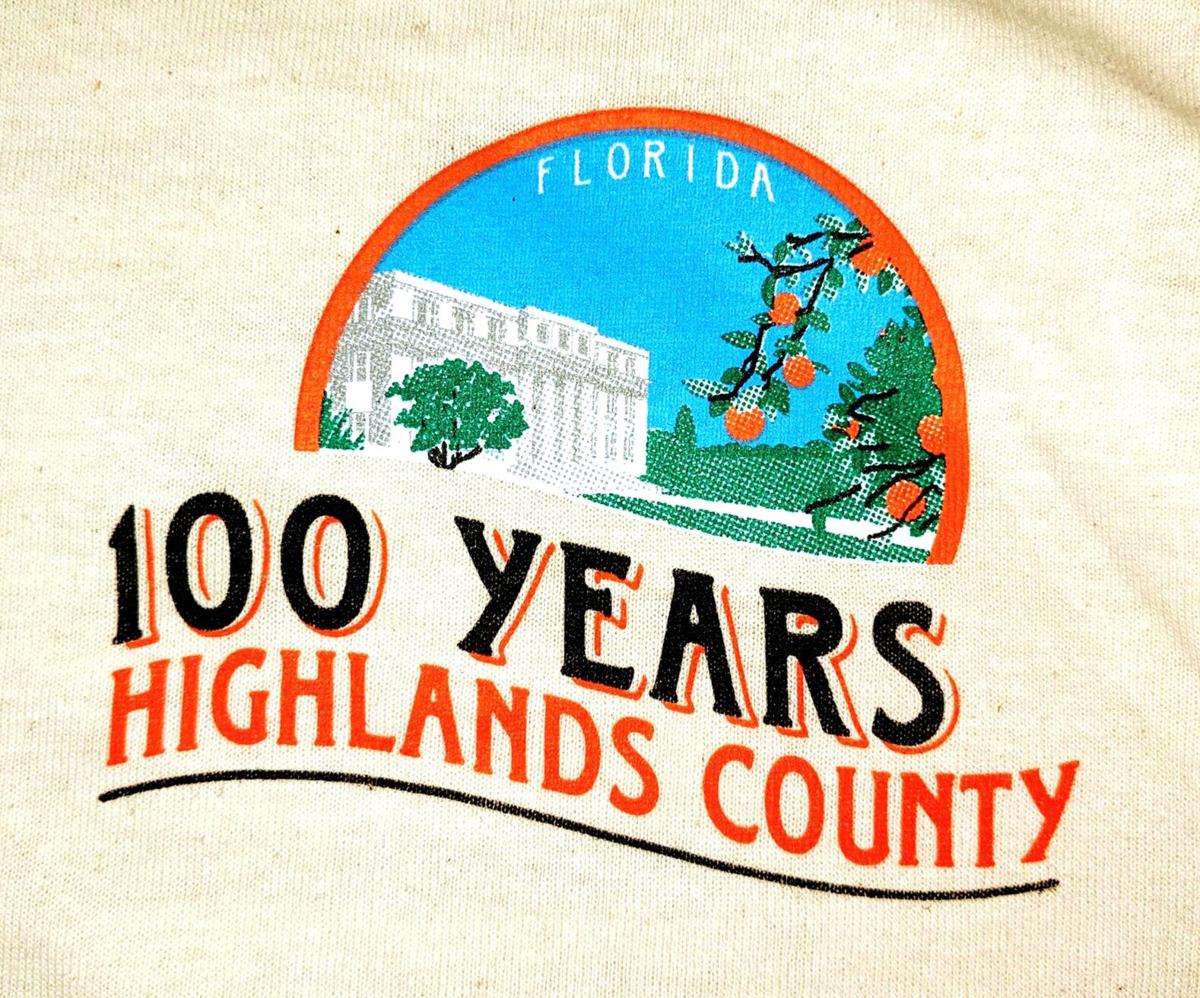 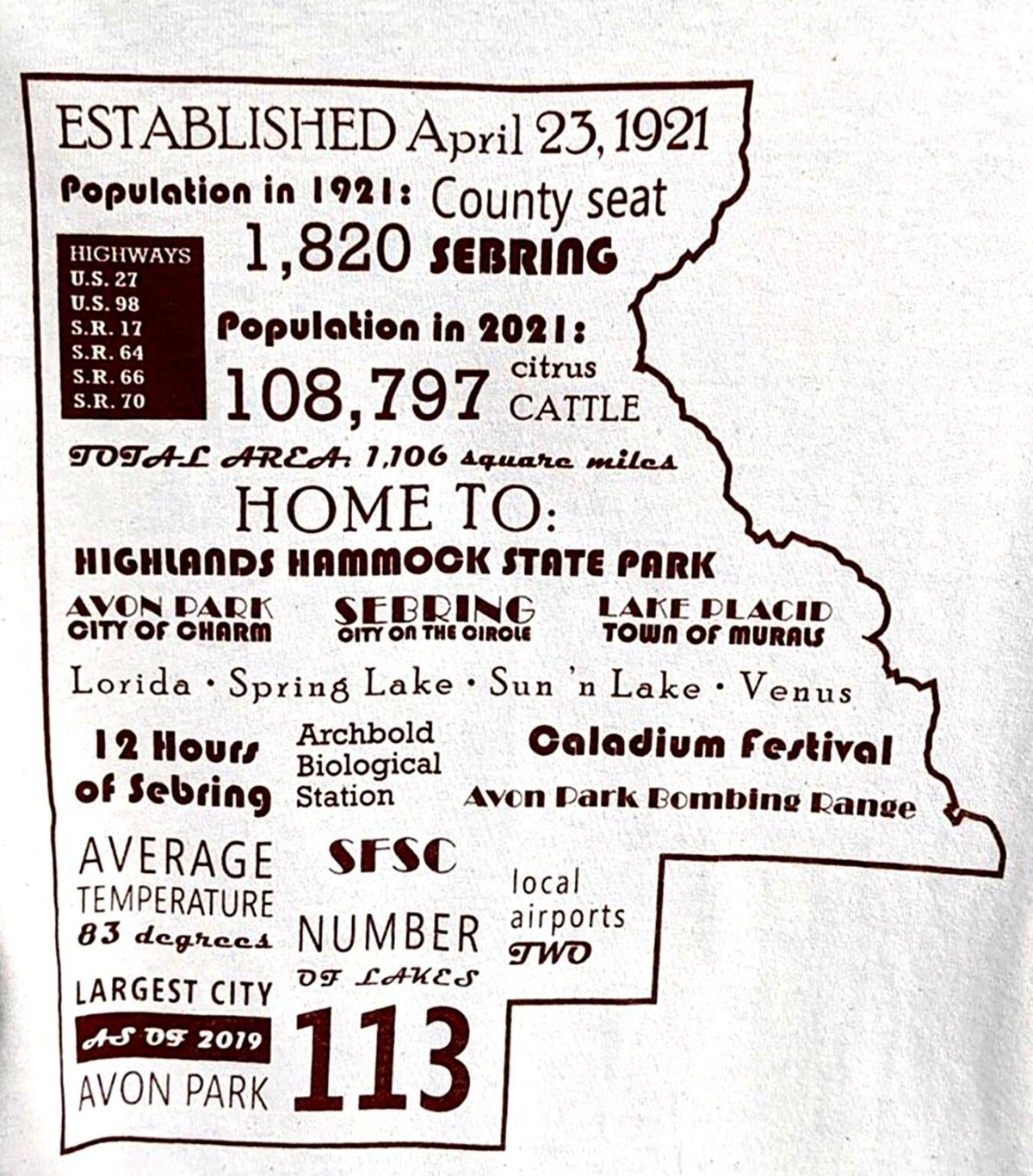 If you want to know some basic statistics about Highlands County, look no further than the back of the commemorative centennial T-shirt, currently on sale through the county’s Development Services Department at 501 S. Commerce Ave. in Sebring.

If you want to know some basic statistics about Highlands County, look no further than the back of the commemorative centennial T-shirt, currently on sale through the county’s Development Services Department at 501 S. Commerce Ave. in Sebring.

SEBRING — If you’re ready for a birthday party, the county has one Friday. Highlands County government officials will host an exhibition in front of the Government Center in Sebring to celebrate the county’s centennial.

The outdoor exhibit, from 9 a.m. to 2 p.m., will include a proclamation by the Board of County Commission — which moved its Tuesday meeting to Friday for the celebration — and informative booths from various cultural, agricultural, conservation, historic and public service organizations. It’s all to commend April 23, the day in 1921 when then-Governor Cary A. Hardee signed an act of the Florida Legislature to split the much larger DeSoto County into the present day boundaries of DeSoto, Charlotte, Glades, Hardee and Highlands counties.

Prior to Florida’s entry into the United States, Native Americans roamed the flat coastal plains, low rolling hills, and sandy ridges of the Okeechobee Basin as early as 1000 B.C. The area has more than 80 freshwater lakes with 78 square miles of water that now belong to all residents.

In the early 16th century, Spaniards arrived and explored the peninsula. One site, the “Goodnow Mound,” contained silver coin beads indicating contact between natives and Spaniards by the start of the 17th century.

By 1821, Spain had transferred its interests in Florida to the United States as a U.S. Territory. During the Second Seminole War of 1835 to 1842, troops under Col. Zachary Taylor cleared land, built forts, and cut roads through the wilderness. After that war, Congress passed the Armed Occupation Act, giving 160-acre tracts of land to any family willing to settle in certain parts of southern Florida.

Upland settlers cultivated citrus, molasses and hogs. Rangeland settlers set up cattle ranches. Venus, with just three families, started as the county’s first settlement. Other settlements followed. Oliver Crosby set up a formal, planned development in 1884 that became Avon Park. Ohio businessman George Sebring visited the area around Lake Jackson in 1911 and decided to set up a new town named after him. Lake Placid, platted in 1919, was originally the Town of Lake Stearns.

The areas have grown in agriculture, tourism and industry. The relatively mild year-round weather made a good training ground for U.S. Army Air Corps during World War II, resulting in the building of bases that became the Avon Park Air Force Range and the Sebring Regional Airport, part of which is now the Sebring International Raceway, known internationally for more than 60 years as the home of the 12 Hours of Sebring Le Mans race.

Highlands County Government has set up a website at bit.ly/HC100years, titled “A Century Later: Reflections of Highlands County History.” It has photos, short articles and voice recordings of people who lived the history here.

The county also has commemorative T-shirts for sale on Ebay.com and at the Development Services office at 501 S. Commerce Ave. in Sebring. Proceeds will help pay for a mural commemorating Highlands County’s 100-year anniversary.