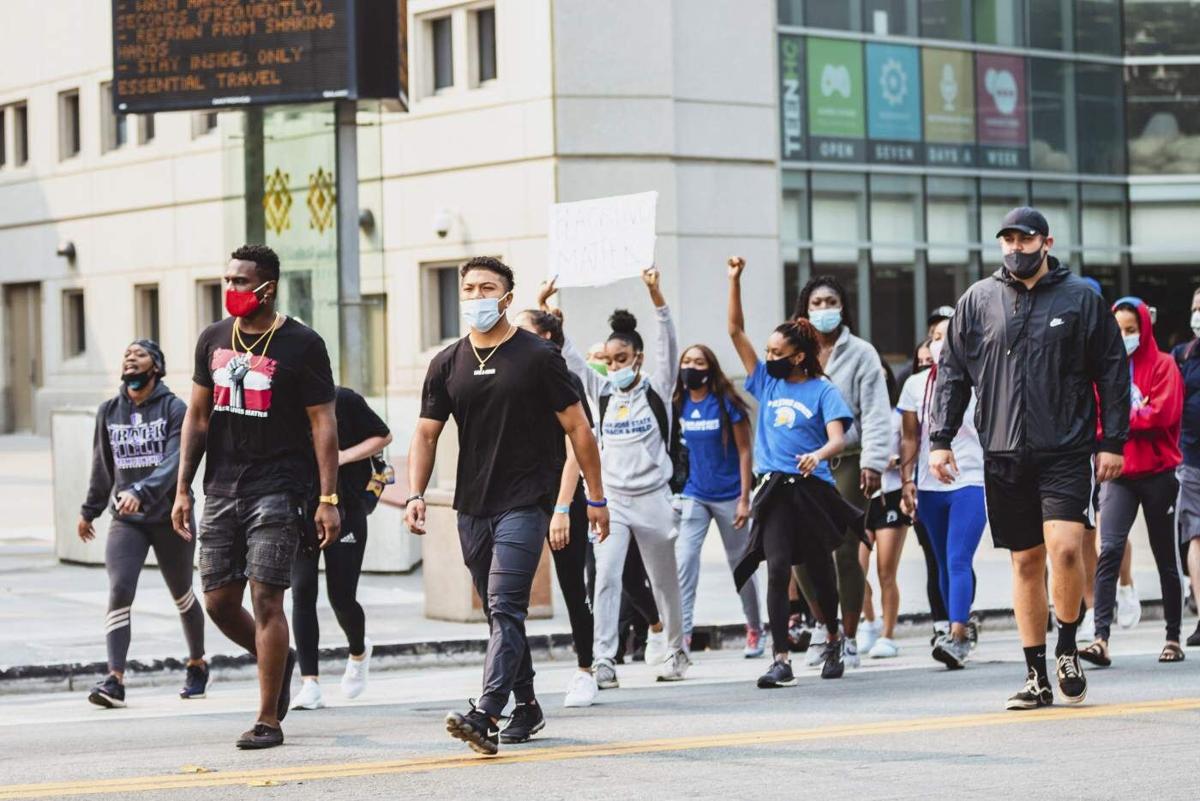 In this Sept. 1, 2020 photo, student-athletes from San Jose State University march from their campus to City Hall to bring awareness to issues of social injustice in San Jose, California. Student-athletes across college campuses are taking a lead from professional athletes by using their platforms in hopes of creating change. 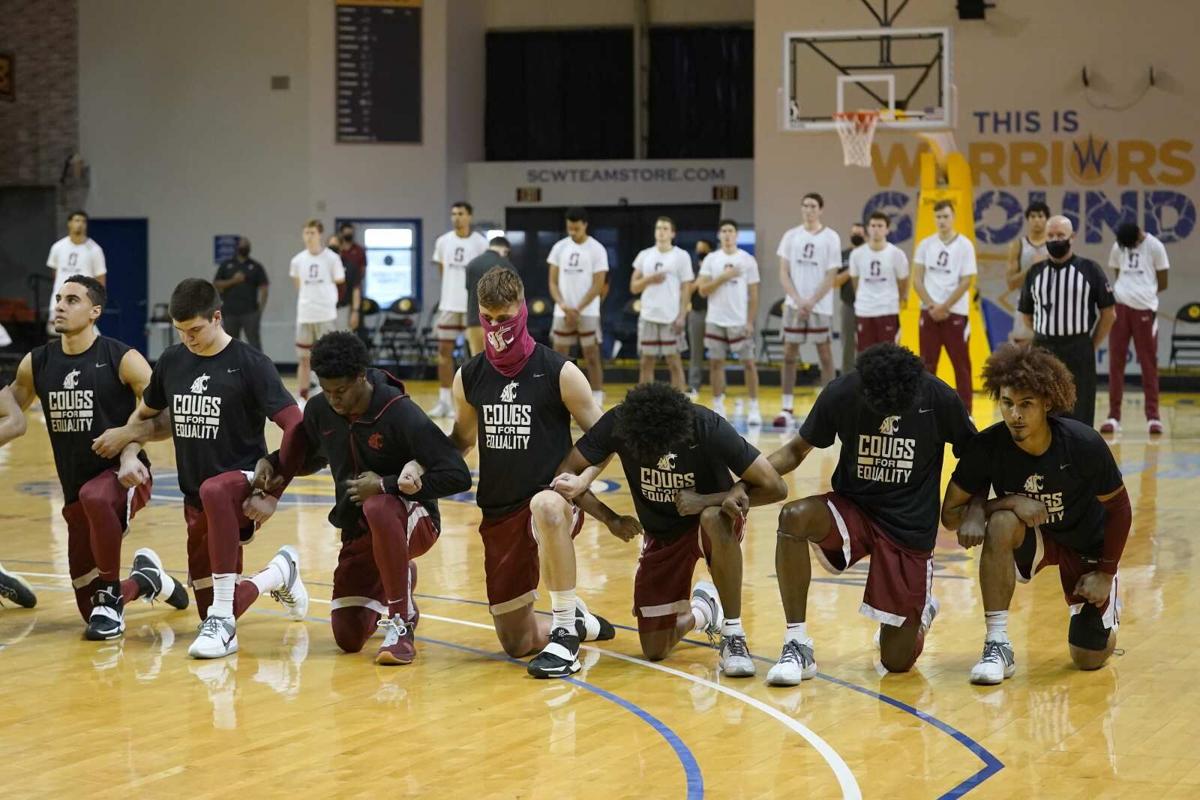 In this Jan. 9, 2021, file photo, Washington State players kneel during the national anthem in front of standing Stanford players before an NCAA college basketball game in Santa Cruz, Calif.

In this Sept. 1, 2020 photo, student-athletes from San Jose State University march from their campus to City Hall to bring awareness to issues of social injustice in San Jose, California. Student-athletes across college campuses are taking a lead from professional athletes by using their platforms in hopes of creating change.

In this Jan. 9, 2021, file photo, Washington State players kneel during the national anthem in front of standing Stanford players before an NCAA college basketball game in Santa Cruz, Calif.

SAN JOSE, Calif. — Whether talking to a teammate, close friend or complete stranger, San Jose State football player Drew Jenkins has a go-to question when discussing hot-button topics: “Are you OK with the society you live in?”

A political science major, Jenkins has spent the past several months suiting action to words, joining fellow students across the country in using the platforms they have as athletes to speak out about issues like racism and police brutality. They are helping educate their peers about what it feels like to live as a minority, embracing the responsibility to try to create tangible change.

For many, the push has led to the formation of athlete groups dedicated to inclusion and outreach. In fact, every Pac-12 Conference university now has some form of coalition to support Black and minority athletes — eight of those organizations were established over the past year, some still in the early planning stages, while others have built on what they already had in place.

At San Jose State, Jenkins and teammate Christian Webb are involved in a group called People of Change and led a march last year. Last Friday, they made a presentation to their teammates on Black history and why it is celebrated in February “just to educate them on this month,” Jenkins said.

They also hope to hold an event in the coming weeks to raise money for further community action, with plans to meet as an entire organization sometime in March if it can be done safely under COVID-19 protocols.

Many of the groups emerged in the aftermath of George Floyd’s death last May while he was in the custody of Minneapolis police.

“It’s just somewhere to go and people that you trust and that you feel safe also voicing your opinion with,” said University of California baseball player Darren Baker, whose father, Dusty, manages the Houston Astros. “I think it was something that was long overdue. It’s unfortunate that some events around the country had to happen for this to finally become a thing, but I’m glad it did.”

At Stanford, defensive end Thomas Booker is part of a movement on campus he and others considered essential in the current U.S. climate. The group, called CardinalBLCK, is mostly meeting over video calls for now with members scattered. While still firming up a mission statement, the group aims to be progressive in community outreach.

“We felt like we needed a community that had all of our interests in mind and at heart,” Booker said. “What we envision for the organization to be is, first off, a place that Black Stanford student-athletes can go to and have similar faces and opinions and ideas expressed for them, where as before there wasn’t ever a real formal organization for that. Stanford is a majority-white institution so sometimes it can feel isolating, specifically as a student-athlete and all the stereotypes that come along with that.”

Stanford athletic director Bernard Muir, who is Black, has served in a supporting role for CardinalBLCK. He acknowledges the administration won’t always handle things perfectly and this is a forum for everyone to find ways to be better. Stanford athletes approached him after Floyd’s killing.

“I think the country was hurting,” Muir said. “Certainly our student-athlete population was hurting, so they wanted to come together and talk and vent their frustrations and talk about their own experiences here on campus.”

The moment Jenkins can get everybody together again in person he plans to host a town-hall forum for all San Jose State athletes to tackle social justice issues in a safe space.