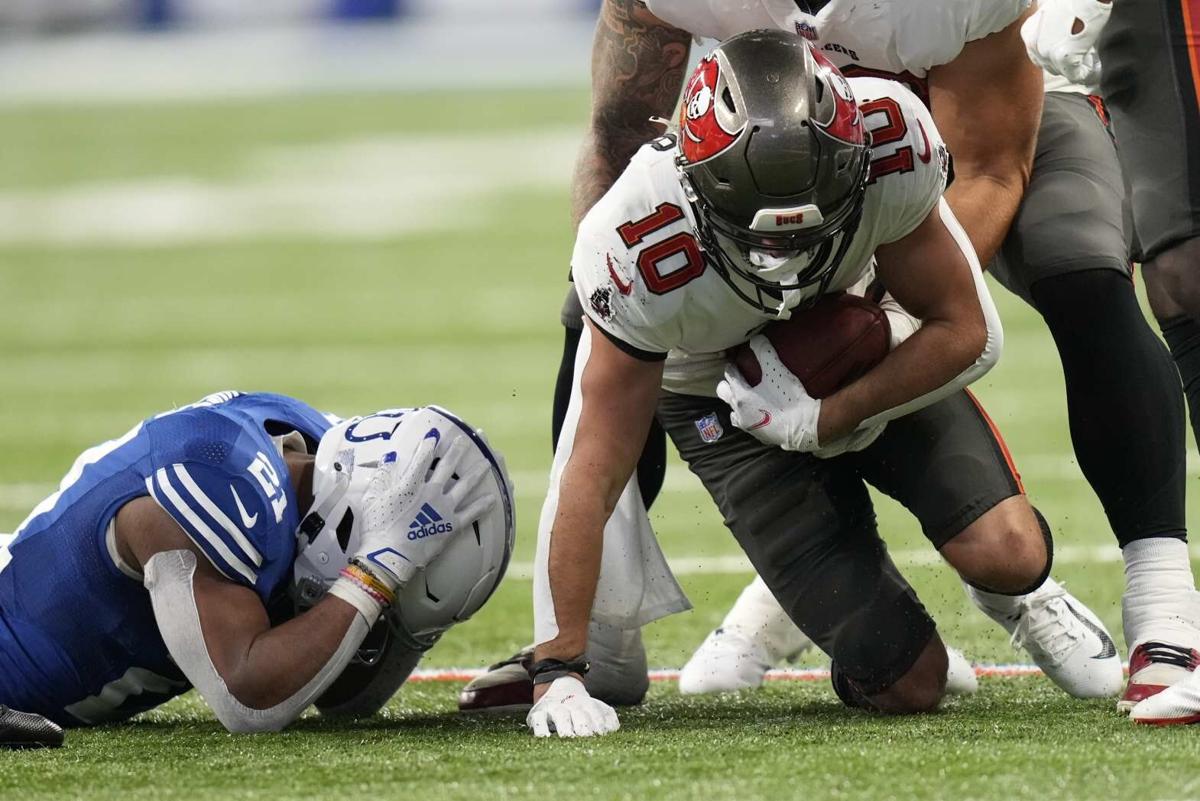 Tampa Bay Buccaneers’ Scott Miller (10) recovers a fumble by Indianapolis Colts’ Nyheim Hines (21) during the second half of an NFL football game, Sunday, Nov. 28, 2021, in Indianapolis. 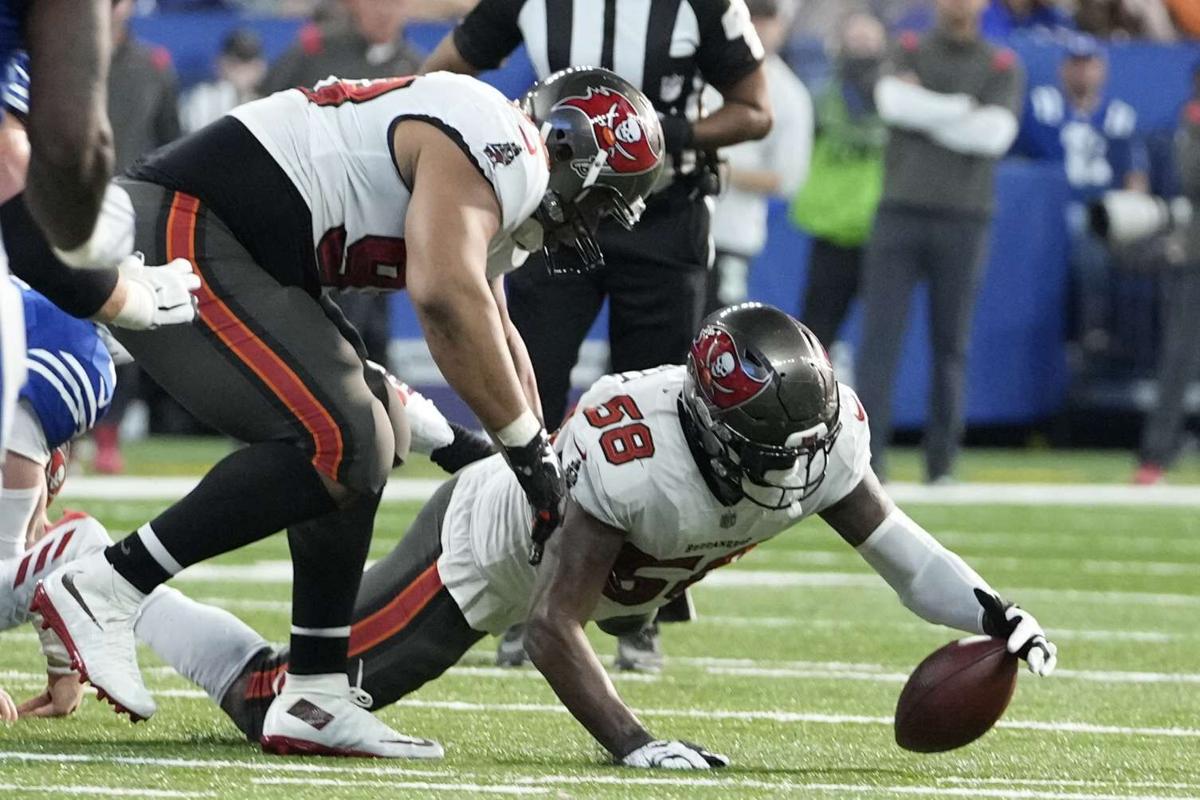 Tampa Bay Buccaneers’ Shaquil Barrett (58) recovers a fumble during the second half of an NFL football game against the Indianapolis Colts, Sunday, Nov. 28, 2021, in Indianapolis. 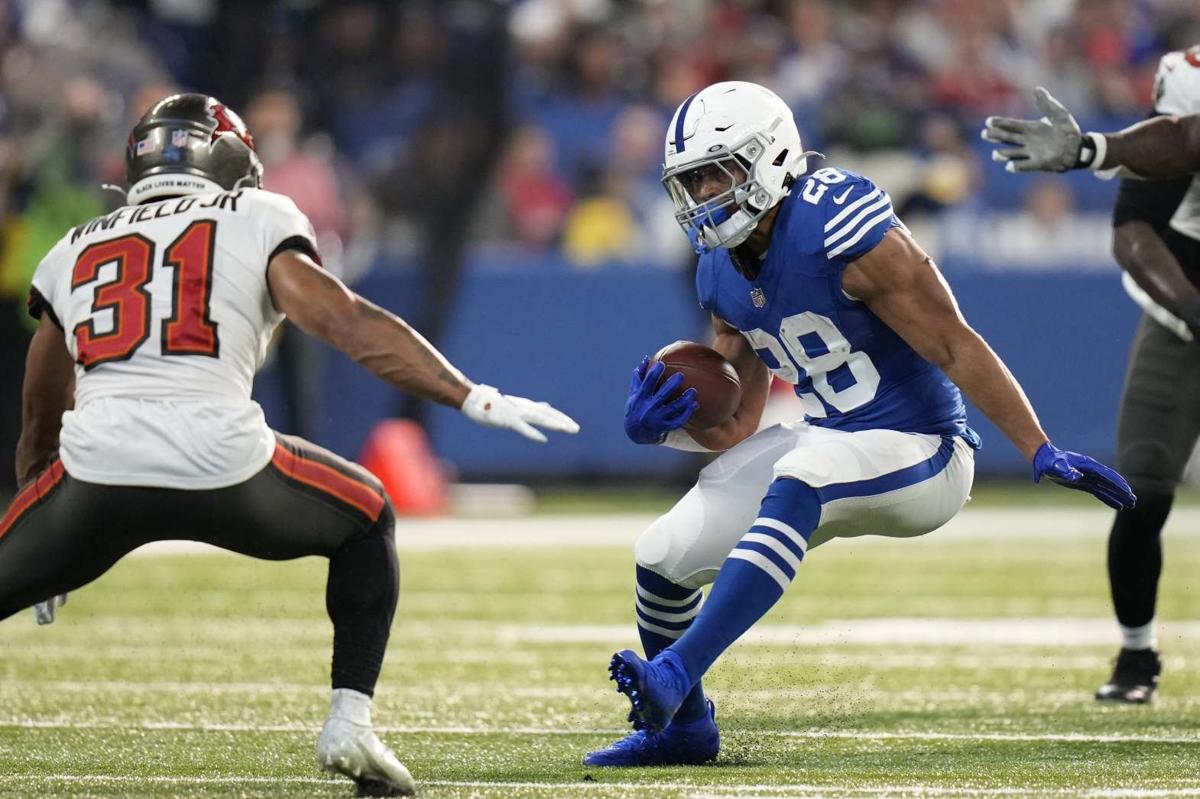 Tampa Bay Buccaneers’ Scott Miller (10) recovers a fumble by Indianapolis Colts’ Nyheim Hines (21) during the second half of an NFL football game, Sunday, Nov. 28, 2021, in Indianapolis.

Tampa Bay Buccaneers’ Shaquil Barrett (58) recovers a fumble during the second half of an NFL football game against the Indianapolis Colts, Sunday, Nov. 28, 2021, in Indianapolis.

So did quarterback Carson Wentz.

Five turnovers, four in the second half, and abandoning their run-first approach proved too much to overcome against the defending Super Bowl champions.

“Ultimately, when you make that many mistakes against a good football team, it’s going to come back and haunt you,” Reich said moments after Tampa Bay rallied for a 38-31 victory.

The ramifications from this loss could be lasting.

After winning five of six to climb above .500 and back into playoff contention, the Colts (6-6) failed to close the gap with division-leading Tennessee losing to New England. They also watched some other wild-card contenders jump ahead.

And it all seemed to change in an instant when the Colts were about to seize control.

Wentz had closed out the first-half scoring with a 4-yard touchdown pass to T.Y. Hilton on fourth-and-1, giving Indy a 24-14 lead. Then Wentz opened the second half by moving the Colts moving into position to potentially take a three-score lead.

That’s when Bucs linebacker Shaquil Barrett shot up the field, jarred the ball loose from Wentz and recovered the ball at the Tampa Bay 35-yard line. Six plays later, Leonard Fournette scored for the third time to make it 24-21.

“We felt like if we were going to stop the run and make him throw it 40 times, we’d get a few (takeaways) and we did,” he said. “That strip-sack, I think, changed the whole ballgame.”

From there, things went downhill fast for Indy.

The Colts essentially abandoned their run-first approach as Wentz dropped back on 26 straight snaps, making it more challenging to put the ball in their hands of their top playmaker, running back Jonathan Taylor. Afterward, even Wentz acknowledged he didn’t realize he had run so many consecutive passing plays.

It was all by design.

Tampa Bay (8-3) dared the Colts to pass and Wentz did, throwing 44 times. He was picked off twice and lost a fumble.

Taylor, the league’s leading rusher, had 17 carries for 83 yards and one score and caught four passes for 14 yards. But until Indy’s final drive, Taylor had only 25 yards rushing.

“We couldn’t get anything in the run game, just couldn’t get one run to hit in the first quarter,” Reich said. “Then we opened it up, we started play-actioning on first down and hit the big play to Ashton (Dulin). Things started opening up a little bit and Carson (Wentz) was hot.”

But the one-dimensional approach allowed the Bucs to become more aggressive and they made sure it paid off.

A deep throw from Wentz to Michael Pittman Jr. was wrestled away by Antoine Winfield Jr. and the Bucs converted it into the go-ahead touchdown.

When Nyheim Hines fumbled a punt inside the Colts 20, Tampa Bay settled for a short field goal.

And after Taylor tied the score at 31 with 3:29 left and Fournette broke the tie with a 28-yard run with 20 seconds to go, former Colts defensive back Pierre Desir picked off Wentz near the goal line to close it out. It was the only turnover Tampa Bay didn’t convert into points.

“I think we started to kind of get in the groove and moved the ball, just the turnovers killed us,” Wentz said. “Against a good team like that, that capitalized on the turnovers, you’ve got to own it.”