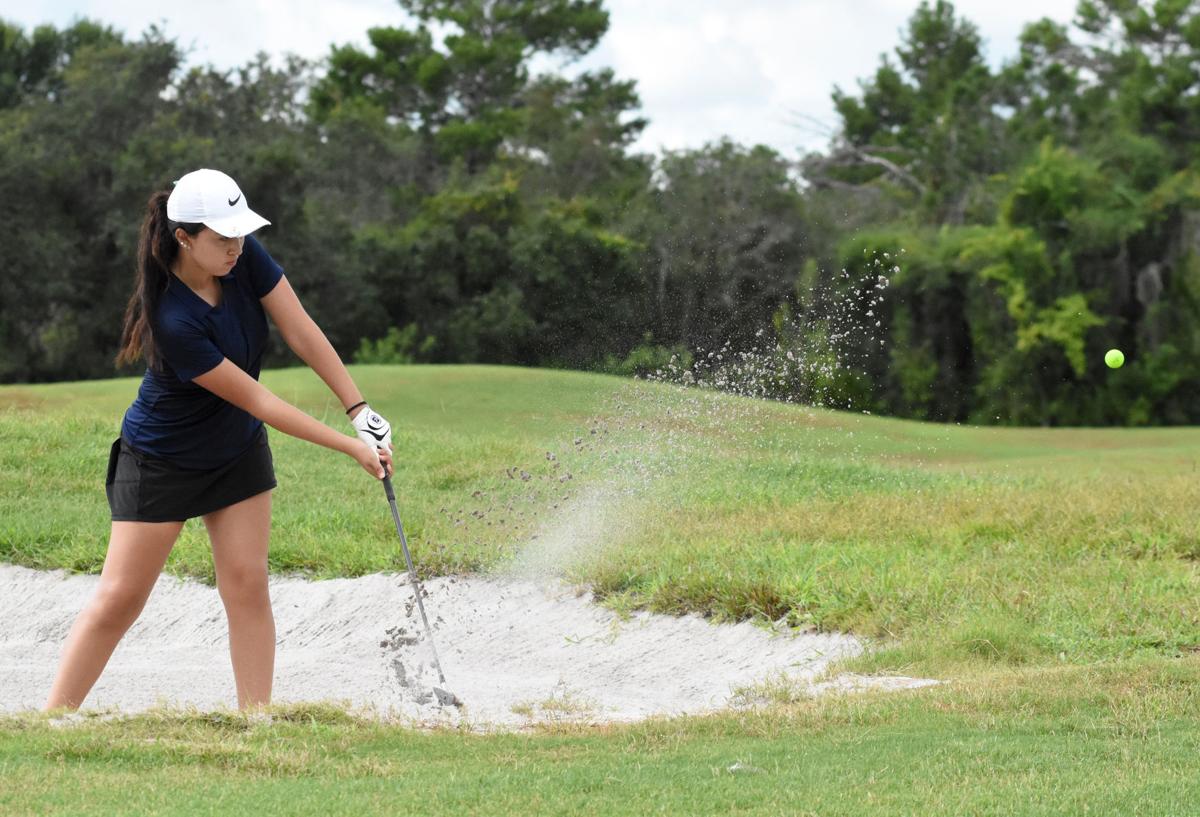 Lexandra Luevano blasted out of a bunker during the fourth event of the Sertoma Junior Golf Tour. 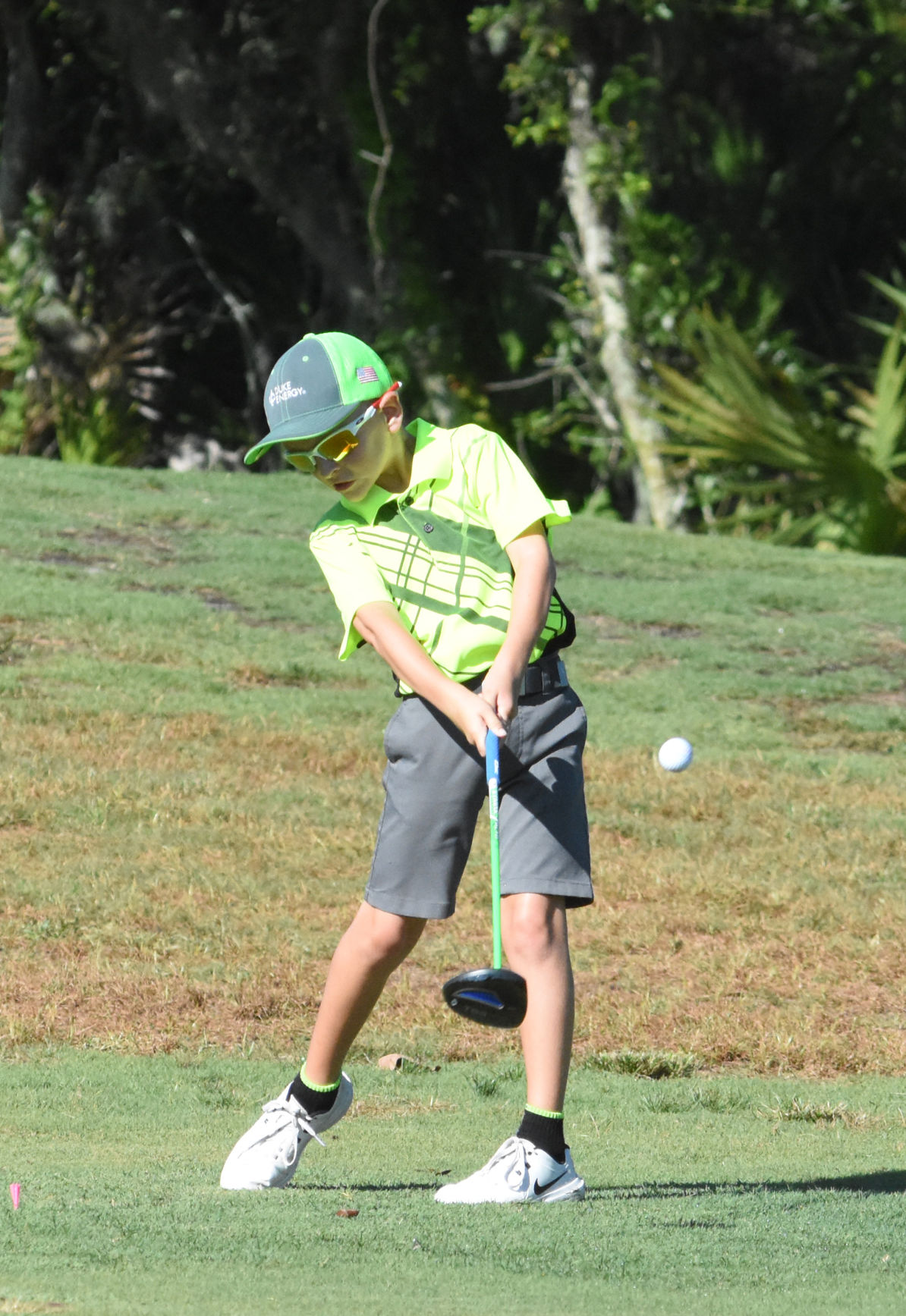 Owen Smith rocketed the ball out of the tee box during the Sertoma Junior Golf Tour. 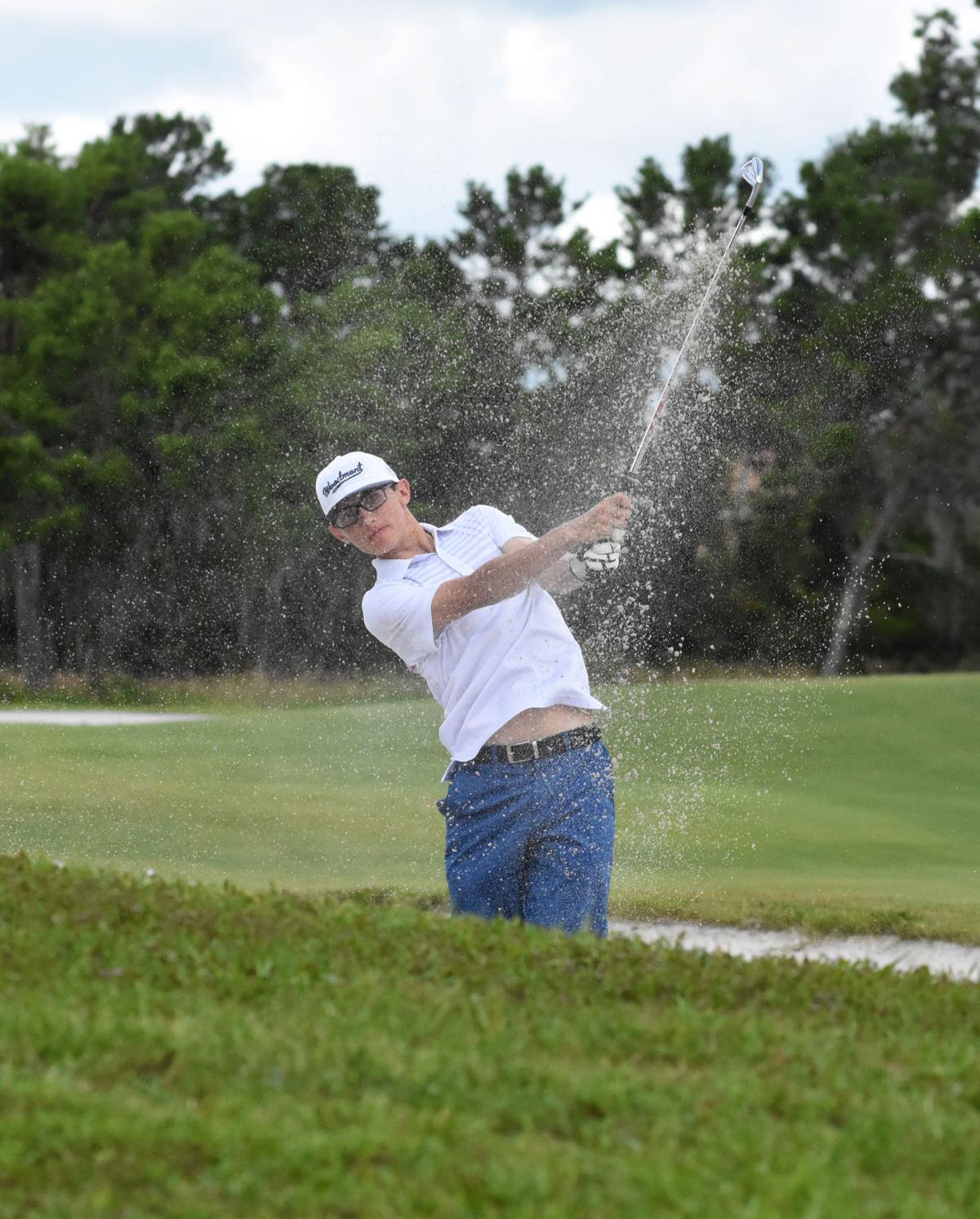 Nicholas Garber hit out of a sand trap and onto the fairway during the Sertema Junior Golf Tour. 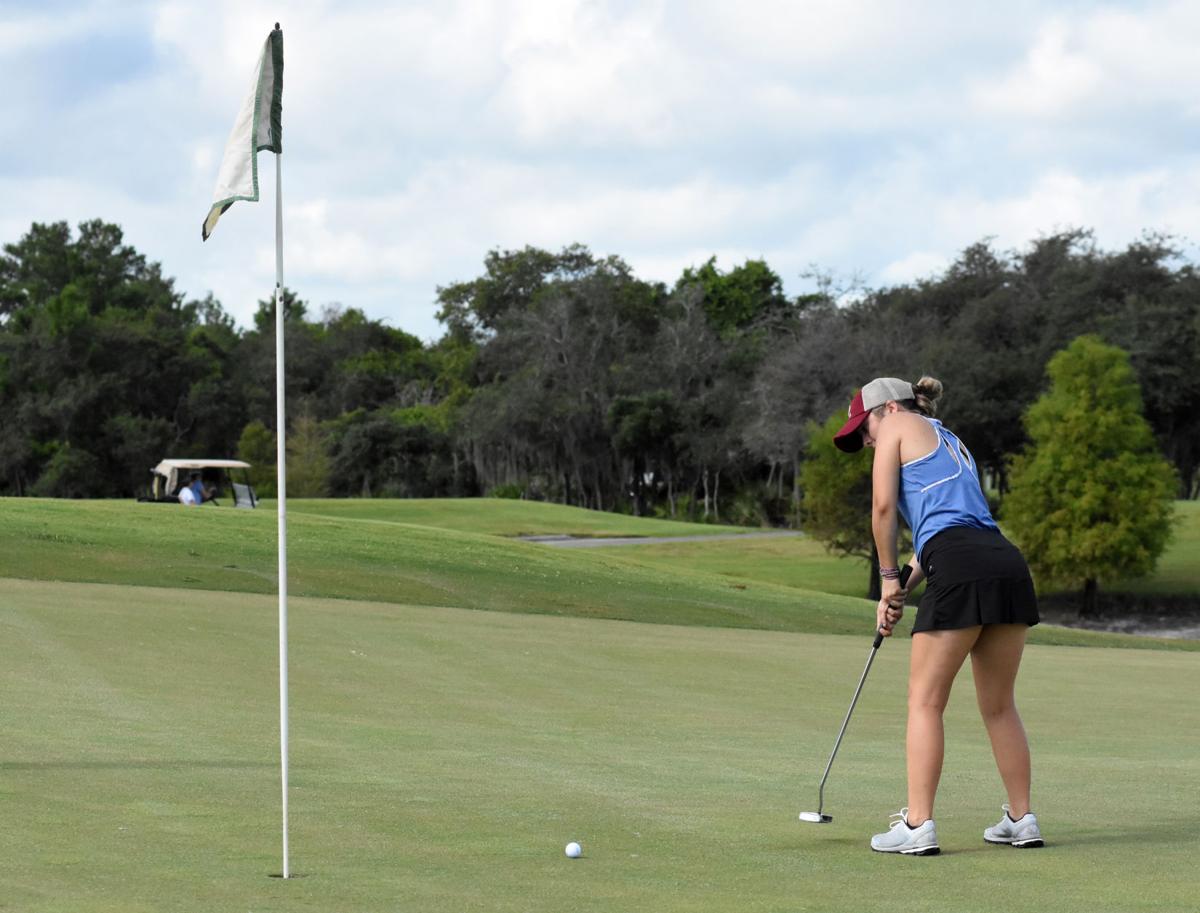 Samantha Presley watched her putt inch closer to the pin at Sun ‘N Lakes Golf Club during the fourth event of the Sertoma Junior Golf Tour. 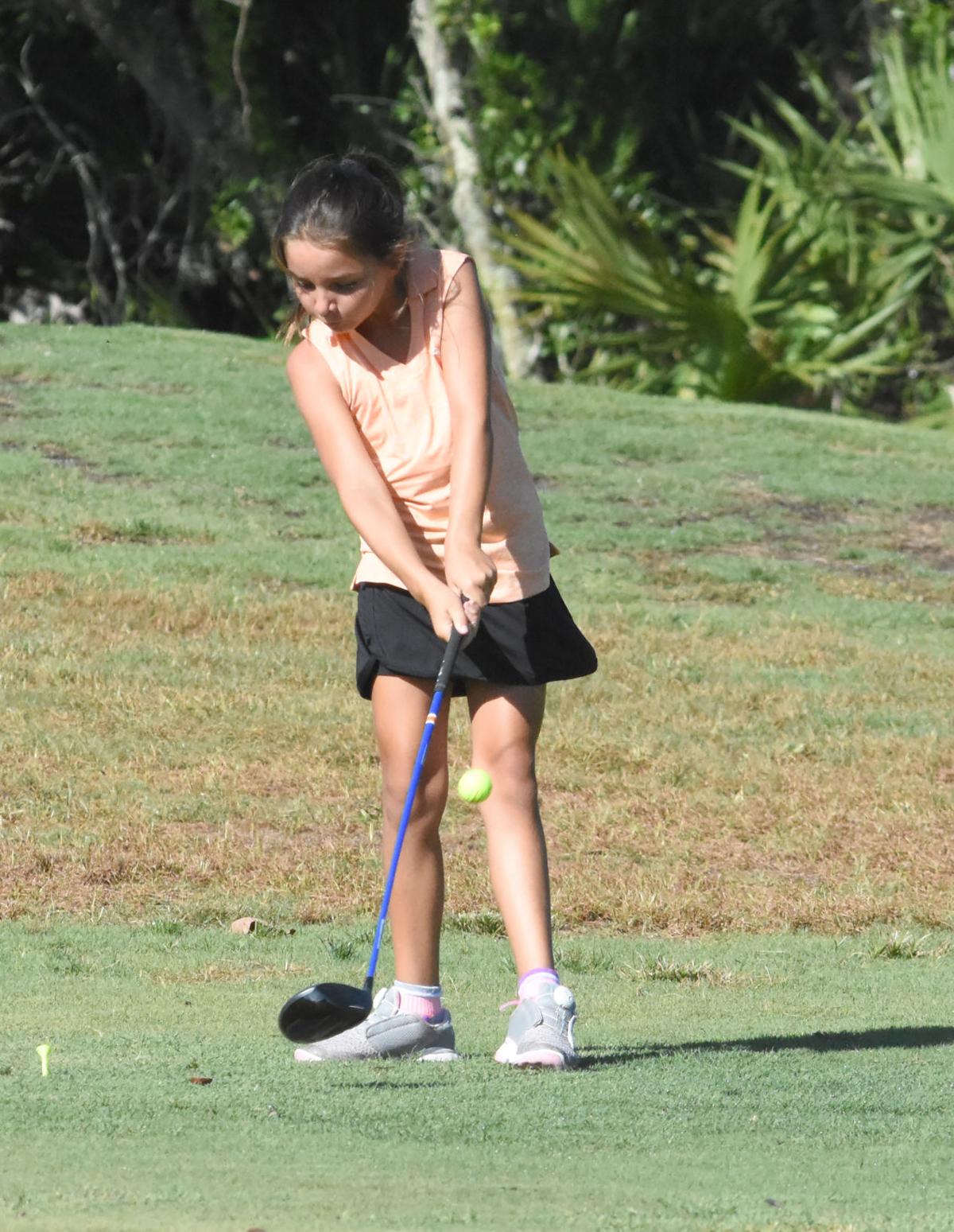 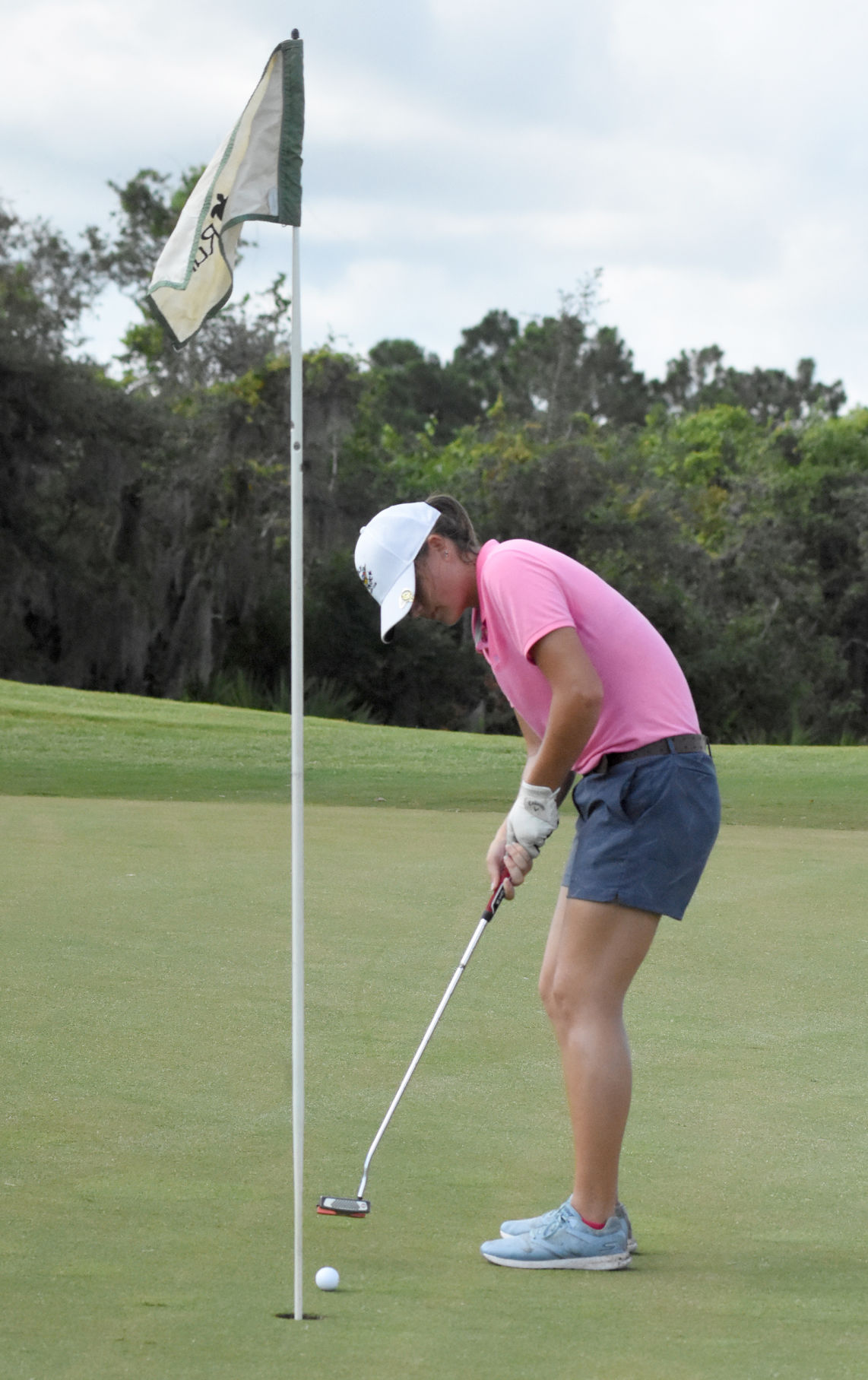 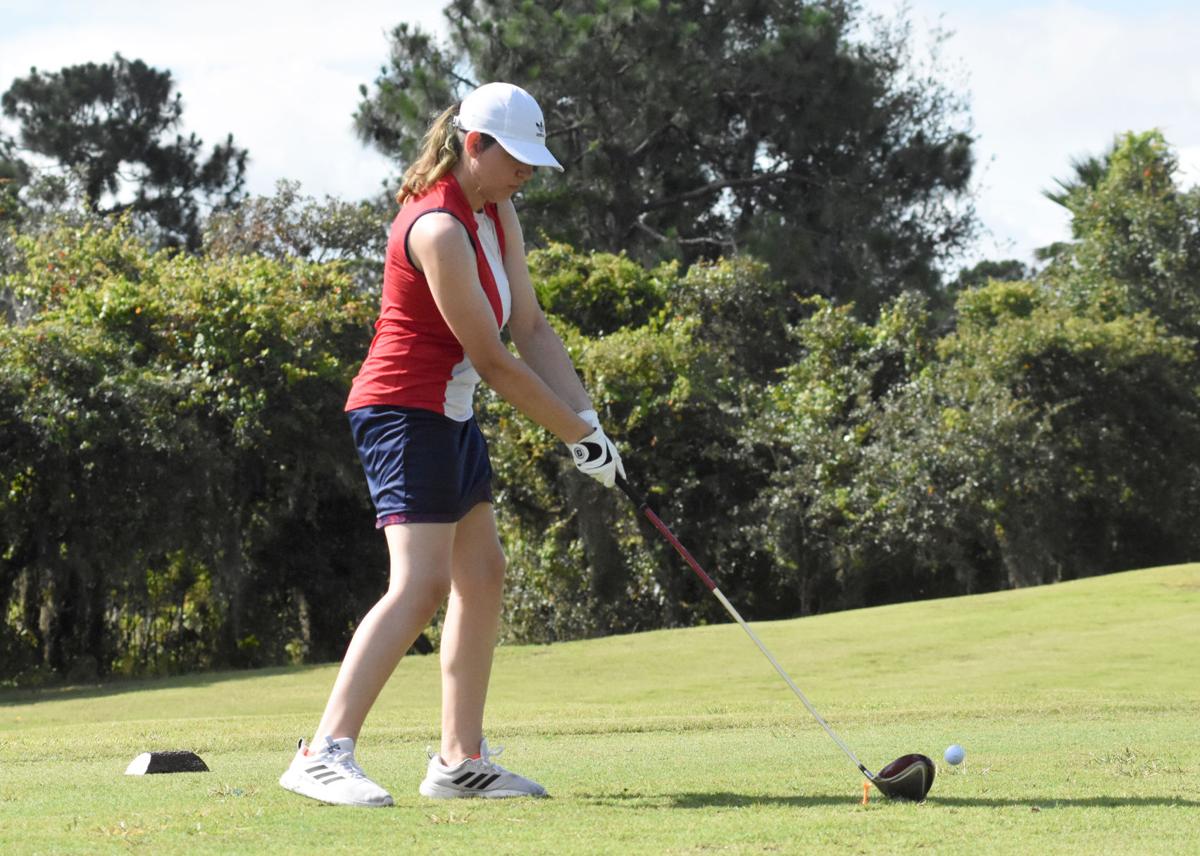 Rylee Franze sent the ball sailing down the fair way during the Sertoma Junior Golf Tour.

Lexandra Luevano blasted out of a bunker during the fourth event of the Sertoma Junior Golf Tour.

Owen Smith rocketed the ball out of the tee box during the Sertoma Junior Golf Tour.

Nicholas Garber hit out of a sand trap and onto the fairway during the Sertema Junior Golf Tour.

Samantha Presley watched her putt inch closer to the pin at Sun ‘N Lakes Golf Club during the fourth event of the Sertoma Junior Golf Tour.

Rylee Franze sent the ball sailing down the fair way during the Sertoma Junior Golf Tour.

SEBRING – The Sertoma Junior Golf Tour continued last Thursday with the fourth event at Sun ‘N Lake Golf Club on the Turtle Run course. Sixty-eight junior golfers hit the links and to battle not only each other but also the scorching summer heat. Points are given based on the best five finishes out of the first nine events plus the tour championship for a total of six tournaments.

“Our numbers are up and we have quite a few more players this year,” said Sertoma Junior Golf Director Andy Kesling. “We have 29 girls which is significantly higher than any other year. That is a huge plus and it is nice to have 65 to 70 golfers each week. They played on my home course of Turtle Run. It was a really good test for the kids and it was a hot day. So far, so good this summer. We are happy to be out playing golf and to be able to provide a place for these kids to go with everything going on with the pandemic. It is nice to see kids playing and getting some exercise out on the golf course.”

Lane Revell reclaimed his first-place position in the boys 16-18 group when he carded a 74 and remains in first in the points standings with a total of 216. In close second there was a two-way tie between Clay Jacobs and Cade Scarborough, who each fired 76. Scarborough sits in second in the points standings with 188. Beckham Donovan shot a 78, Avery Hurst came in with 79, and sits in third overall with 179. Nicholas Garber shot 85, Owen Moses had 90, Ranen Carmichael fired a 92, James Swaford made 97, Robby Hill carded a 100 and Kellen Westberry had 106.

“Lane (Revell) is back on top,” said Kesling. “I anticipated that Lane would put up a good number and he did. He played really well but there is definitely some competition in that age group for him. Clay Jacobs is a kid that hasn’t played in a few years and it was nice to see him on the Tour.”

The boys 14-15 age division was led by Brayden Smith, who had a seven-stroke lead and carded a 78 placing him in first. Trent Bray was not far behind with 84 and Jack DuPriest placed third with 92. Jayden Bolin fired a 102, Kale Henderson had 107, JR Redding came in with 116 and Jayson Kellum shot 135. Bray is in the lead points wise with 210 followed by Smith who has 203. Bolin is currently in third with 164 points.

“Brayden (Smith) played extremely well this week,” Kesling said. “Brayden had been somewhat struggling with his game a little bit. He is one of my students so we took him out, watched him play a few holes, gave him a few pointers and worked on course management. When I talked to him, he was playing his own game and managing his game a lot better. I’m happy to see him plotting his way around the golf course better.”

In the girls 14-18 group, Taylor Derr claimed first place after carding an 84. In close second was Melanie Suarez, who fired an 88 and rounding out the top three was Samantha Presley who came in with 91. Aly Smyth had 100, Rebecca Kesling shot 106, Braie Danser came in with 110 and Kearsta Danser made 127. Lexandra Luevano and Mariana Chams tied at 129, Hayli Simmons carded a 139, Tori West had 140, Katherine Moore shot a 145 and Rylee Franze had 148. Melanie Suarez is first overall with 209 points, Presley sits in second with 190 and Braie Danser is in third with 148.

“Taylor (Derr) is a good player and between her and Melanie (Suarez), I think those two are the strongest players in that group,” Kesling stated. “I think those two will battle week-in and week-out. Right behind those two is Samantha Presley and Aly (Smyth) who aren’t too far behind. I think that whole division will start shooting lower scores throughout the summer as they gain more experience.”

“I was really satisfied with the results,” said Samantha Presley. “The course was really nice and it was nice to have a good course to play on. I think Sertoma is a great thing. It is great for golfers who haven’t been playing very long, which I’ve only been playing for two years myself, so it is great. I would absolutely recommend this tournament. Mr. Andy is great and his whole crew is amazing and they do a really good job. Everyone I talk to about the Tour, they think it is great. This summer, winning is always a goal but my major goal is to shoot low 80s.”

Benjamin Trevino was on top for the second week in a row with a five-stroke lead and carded a 40 in the boys 11-13 division. Placing second was Alex Kruschwitz who fired a 45 and in close third was John Roberts with 46. Matthew Suarez shot a 47, Dillon Parnell came in with 50, Daylon White had 52 and. Tanner Simmons made 59, Zachary Dent carded a 64, Hunter Halloran fired a 66 and Lincoln Kampman shot a 76. In overall points, Trevino is in first place with 219, Kruschwitz is in second with 170 and Matthew Suarez is currently in third with 159.

“Ben (Trevino) is right at the top again, he is tough one, but there are some players in that age group that can give Ben a run for his money,” said Kesling. “A lot of those kids can play and I expect to see some battles. I think that age group will tighten up a bit.”

Hannah Castillo held on to the lead for the fourth week in a row in the girls 11-13 division with 51 strokes and remains undefeated during this summer tour. Olivia Kesling placed second when she fired a 57 and in close third was Jenesi Trevino with 58. Rylie Brooker shot a 65, Brooklyn Reed came in with 70 and Selah Damron-Lovett had 72. Castillo has a comfortable 87-point lead and sits in first with 225-points overall. Olivia Kesling has 138 placing her in second and with 110 Damron-Lovett rounds out the top three.

“Hannah (Castillo) has not lost an event yet and she is only 10-years-old,” said Kesling. “She has moved up and is now walking the course and doing it all on her own which will help her mature as a golfer. Olivia (Kesling) in particular is getting better each week and Jenesi (Trevino) is another 10-year-old playing up and she is tough one.”

In the boys and girls 9-10 group Devin Wortinger and Jordan Castillo have been going head-to-head all summer battling for control. Devin Wortinger claimed first in event No. 4 when he carded a 40 but not far behind was Jordan Castillo with 42 strokes and Liam McCann placed third with 50. Bennett VanHook fired a 62, Jadiel DeJesus shot 65 and Elijah Griffin came in with 71. In the points standings, J. Castillo has a nice 51-point lead with a total of 207 which puts him in first place. DeJesus is currently in second place with 156 and D. Wortinger is in third with 150.

“Devin (Wortinger) and Jordan (Castillo) are going to battle for that top spot all summer long,” Kesling stated. “Liam (McCann) is working to get back into it and Bennett (VanHook) just got a new set of clubs so I would anticipate those two to be playing a little bit better. I think we will see some under 40 rounds pretty soon.”

Zoe Hout and Owen Smith were evenly matched at tied for first in the boys and girls 6-8 age division with 31 strokes each. Coming in close third was J.D. Scheipsmeier with 34. Luke Lovett fired 39 while Kayden Albritton and Faith Grant tied with 40. Isabella Morris and Ashlyn Wortinger were even at 41, Nixon Bone carded a 42, Garrett Parnell shot 48 and Brooke Wortinger made 52. Hailey Campbell, Emily-Kate Campbell, Harper Brooker and Austin Sims each had 54 strokes. O. Smith and Hout are neck-and-neck in the overall points with O. Smith in a slight lead with 213 but Hout is on his tail with 210. Scheipsmeier rounds out the top three with 163-points.

“Zoe (Hout), Owen (Smith) and J.D. (Scheipsmeier) are the cream-of-the-crop,” said Kesling. “Zoe and Owen are only separated by three points and those two will battle it out. They are really good friends and it will be great to see who takes that top spot at the end of the season. Then we have that second tier of kids who are newer to the game and are rapidly developing each week. Then at the bottom we have brand new players who are feeling their way around a little bit.”