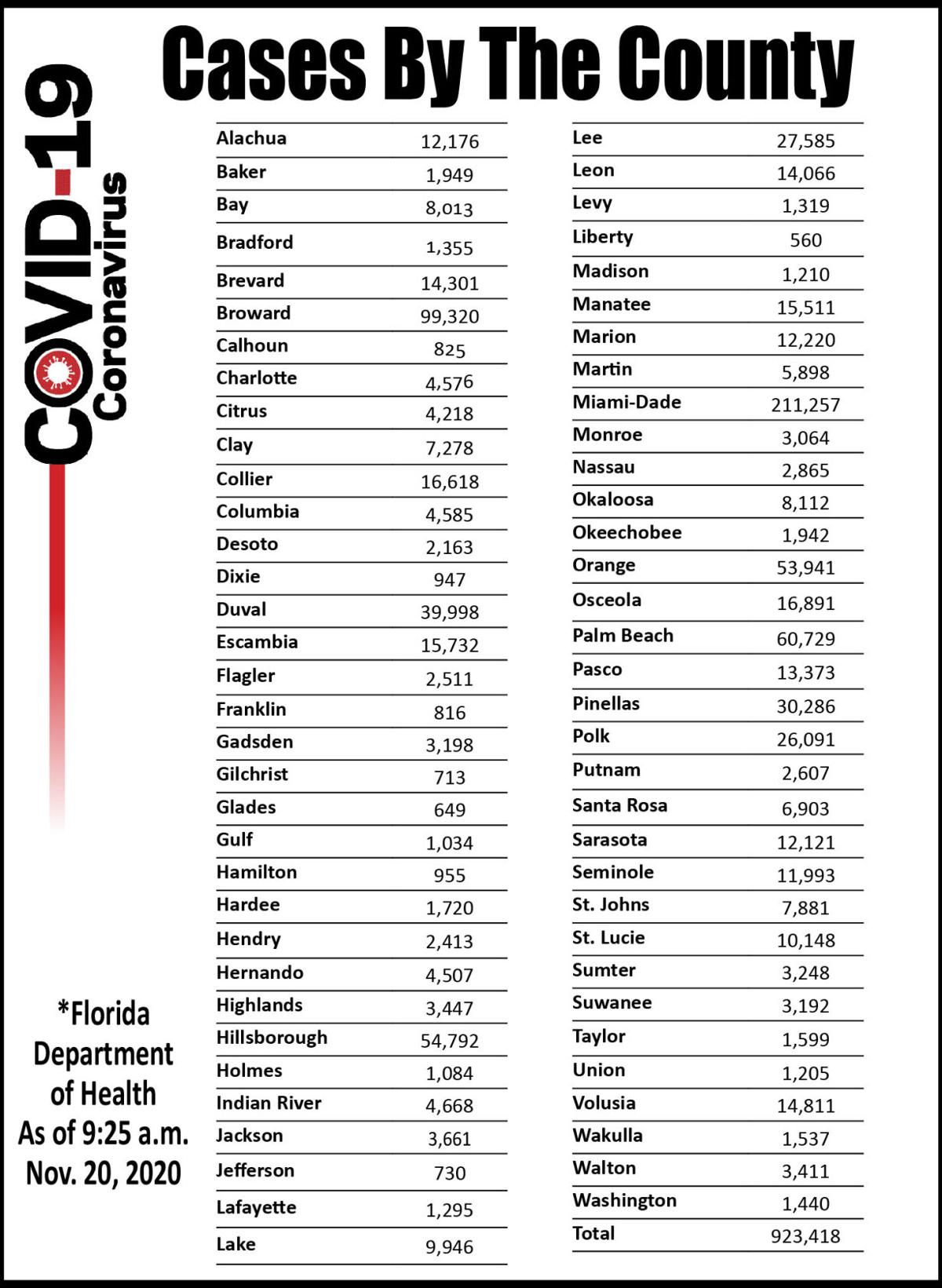 SEBRING — The Florida Department of Health’s Friday report, showed Highlands County with a major increase in positive coronavirus cases. At 76 cases, possibly the highest one day uptick ever. On Nov. 14th the increase was 74. The total of cases is now 3,447 which is divided by 3,425 residents and 22 non-residents. The daily median age was 58 on Friday with a median age of 51.

The increase in cases is reflected from the increase in tests processed-575. The good news is the positivity rate is 11.67%, which is down from 13.57% on Thursday. Unfortunately, there were four deaths reported on Friday, bringing the total for Highlands to 137.

At least two cases came from a long-term care facility as there were 436 cases on Thursday and Friday’s report listed 438. Corrections remained the same with 69 cases. Hospitalizations went up by two cases; as of Friday at 2:52 p.m. there were 64 people hospitalized with the primary diagnosis of COVID-19. The Agency for Health Care Administration showed the ICU bed census as 25 with two beds (7.41%) available. ACHA show’s the county’s bed census as 236 with 24 beds available.

The numbers in the United States remained sobering. According to Johns Hopkins, the U.S. saw an increase of 187,833 cases, setting yet another record for new cases in a day.

“We are very much in the middle of this pandemic,” said Beth Blauer, executive director at Johns Hopkins University Centers for Civic Impact. “Cases are rising everywhere. We are seeing the pandemic hit hard in rural America.”

There were a total of 11.8 million cases as of 3 p.m. Friday and the U.S. should eclipse the 12 million mark over the weekend.

Blauer did say the death data isn’t tracking as high as the total cases, as we’re seeing a younger population catch the virus and they have shown a better ability to shake off the effects of COVID-19 better than the older population.

Blauer did say the county’s positivity rate was a bit of a concern, as it’s tracking the wrong way.

“We kind of enjoyed a period of time towards the end of the summer, early fall, where we were closer to that 5% range the World Health Organization recommends, but the data is now showing we are at the 10% range, so double where the WHO recommended line is.”

The global virus count increased more than a half-million, and there have now been 57.25 million cases. India surpassed the 9 million mark with 45,822 new cases and with 35,918 new cases, Brazil is about to reach the 6 million-case mark.