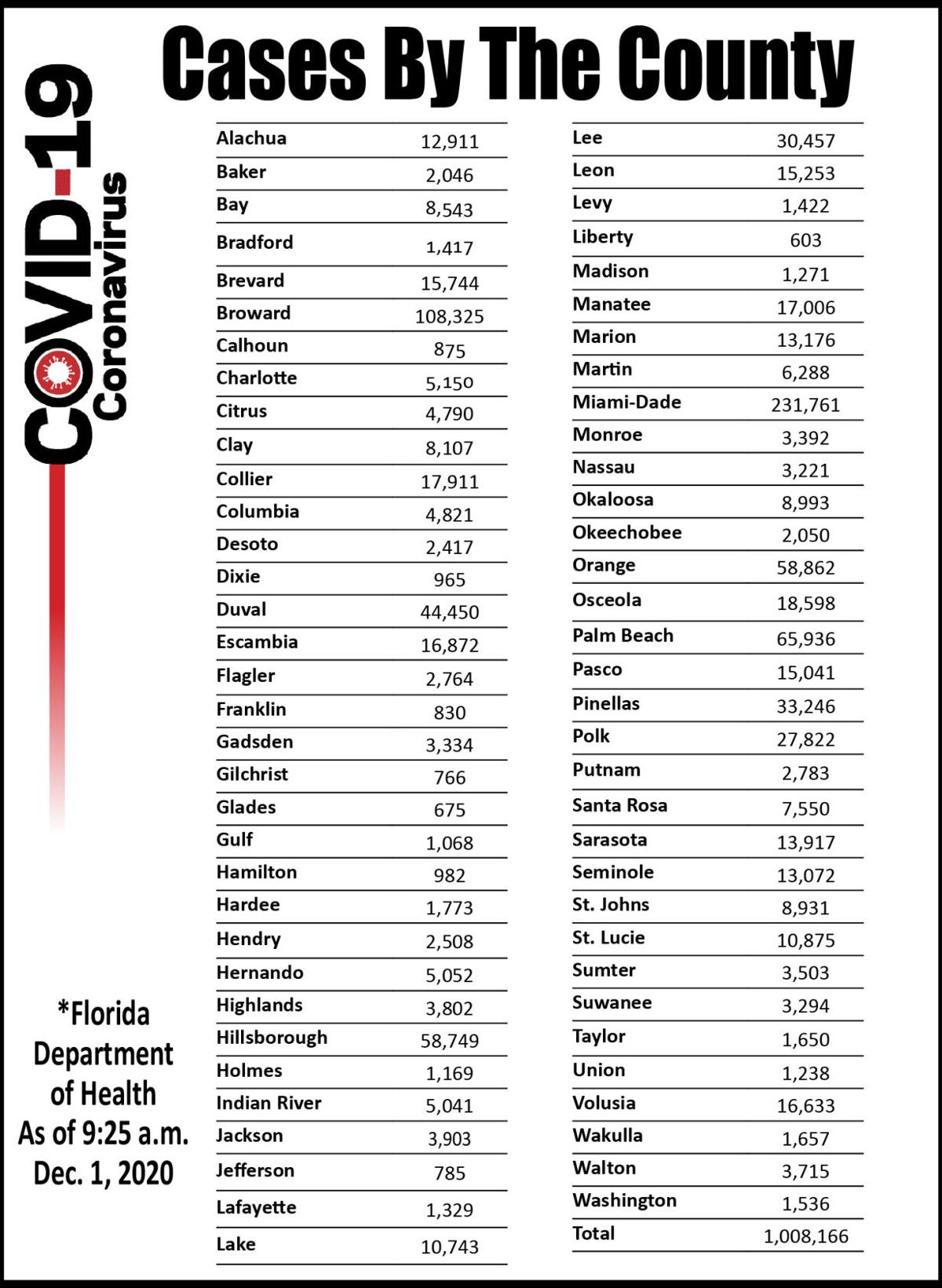 SEBRING — The past few days, Florida has been teetering on the brink of reaching 1 million cases. On Tuesday, the state had the final push it needed to reach over 1 million cases of COVID-19 infections with the release of the Florida Department of Health’s report.

An additional 82 resident deaths were added on Tuesday, increasing the death toll to 18,916, including 18,679 residents and 237 non-residents. According to the dashboard, there were 99,675 tests processed with 91,043 negative results. Between the tests and new cases, Florida saw a daily positivity rate of 8.66%. That is the highest positivity rate since Nov. 17, which is the last day on the report.

“The way Florida, other states, the nation and the world have handled the pandemic will be studied far into the future,” The News Service of Florida reported. “But DeSantis said this week he is focused on plans for vaccines and reiterated his view that government-imposed mandates such as requiring people to wear face masks and shutting down businesses won’t prevent the spread of the disease.”

In Highlands County, 22 new cases of coronavirus was reported, bringing the total cases to 3,802, including 27 non-residents. Only 152 tests were processed on Monday, combined with the new cases, the county saw a 17.76% positivity rate. That was the second highest positivity rate since before Nov. 17, which is the last date visible on the report.

Two new deaths were reported by FDOH and the county’s deaths total 148. There have been 451 cases from long-term care facilities or 12% of all the cases. That is double the state’s average. The county’s correctional cases have reached 71 cases, or 2% of all cases.

As of 4:02 p.m. the Agency for Health Care Administration showed 52 people were hospitalized for COVID-19 on Tuesday. ACHA also showed an ICU bed census at 24 and four ICU beds available (14.29%). That is two more ICU beds available than the previous day.

California set another national record with 21,848 new cases, according to KTLA. Some of the increase is due to several counties reporting numbers for the first time since Thanksgiving. California is the only state to report more than 20,000 cases in a single day and it has now happened twice.

California has averaged 14,108 cases a day over the last seven days, a 61.3% increase from the previous week.

India and Turkey were the only countries to join the United States with more than 30,000 new cases reported for the day.