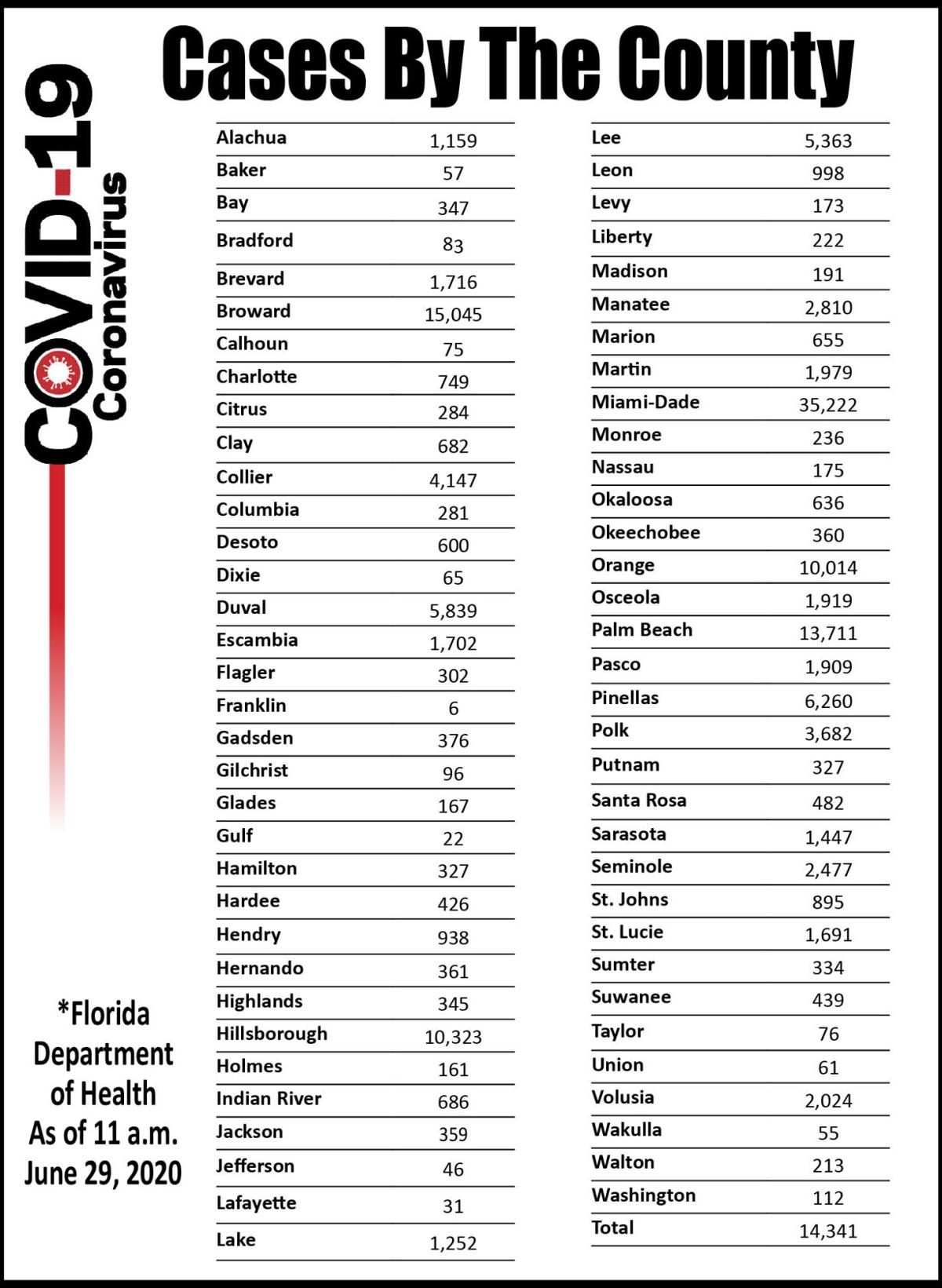 SEBRING — Though not as high as those posted over the weekend, the number of positive coronavirus cases saw no sign of significant slow down as Monday’s increase of 5,266 COVID-19 cases took Florida to 146,341, total.

Highlands County saw a much more modest increase of 21, not much less than that of the previous weekend, when adjusted for errors on the Florida Department of Health’s COVID-19 Dashboard site.

Numbers from Monday morning’s 68-page county report at doh.state.fl.us shows Highlands County had 345 confirmed cases on Monday, up from the previous day’s total of 324, which had been adjusted down from Saturday’s 373 tally.

Local government officials protested Saturday’s high number, saying more than 50 of the 89-case jump that day belonged to other counties.

Three of Monday’s cases were non-residents. Thirty-five local cases were either staff or residents of long-term care facilities and five cases were related to correctional institutions.

It’s an improvement over the 8,900 and 9,500 daily increases in cases on Friday and Saturday.

As a result, AdventHealth Sebring and AdventHealth Lake Placid have shut their doors to visitors again, effective at 6 p.m. Monday, June 29. Visitation will be continued for special circumstances, including end-of-life situations. Other exceptions include patients under the age of 18 may be accompanied by one adult visitor; obstetric patients can have one adult visitor; and exceptions will be made for extenuating circumstances such as imminent end-of-life or unique patient needs for support.

Statewide, more coastal counties and communities have moved to close beaches ahead of the July 4 weekend, in an effort to prevent large gatherings without masks or physical distancing.

However, despite increased testing in Florida, the Sunshine State still ranks No. 32 in tests given per million population.

It was the state’s only single-county four-digit increase.

Among neighboring counties, DeSoto County has seen greater than an 11% positive testing rate every day for the last two weeks and is up to 600 cases, an increase of 15 on Sunday.

Hardee County has also exceeded an 11% positive-result threshold the past two weeks and now stands at 426 cases, also up 15.

Glades County has seen 167 positive cases, while doing far less testing than Highlands County, and 79 of those cases are related to a correctional facility.

Okeechobee County has seen 80 new cases the past five days and now has seen 360 positive cases.

Nationally, according to the Centers for Disease Control and Prevention, the United States now has almost 2.55 million cases, up 41,075.