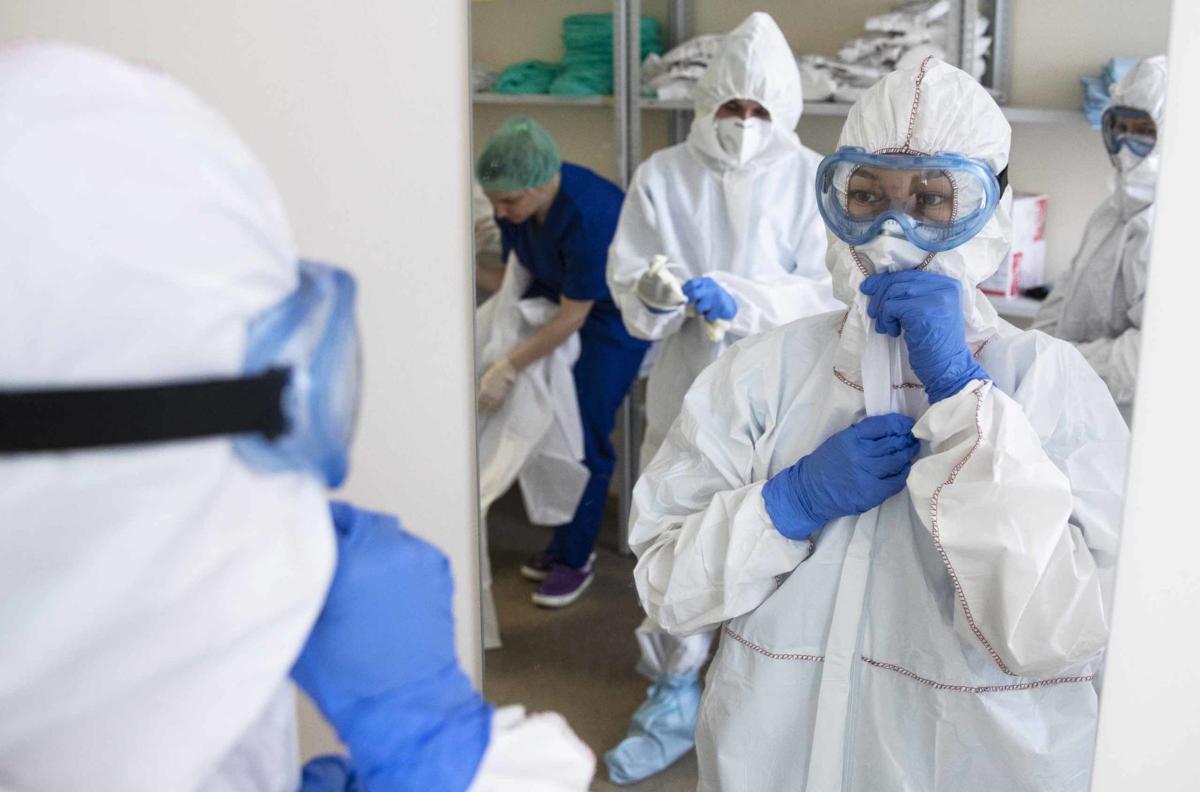 In this photo taken on Tuesday, April 21, medical workers put on protective gear in order to assist coronavirus patients at the intensive care unit of Vinogradov City Clinical Hospital in Moscow, Russia. Reports of Russian medical workers becoming infected with the coronavirus are emerging almost daily as the country copes with a growing number of patients. 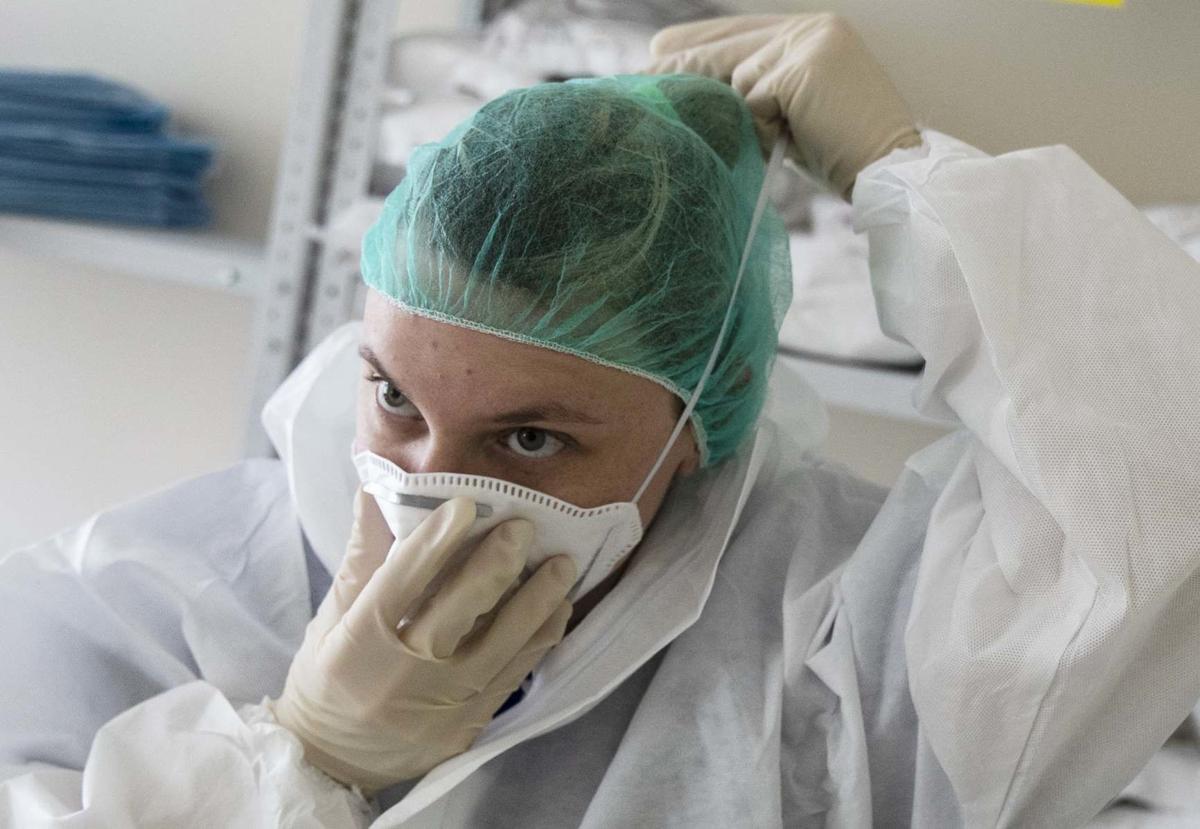 In this photo taken on Tuesday, April 21, a medical worker puts on protective gear in order to assist coronavirus patients at the intensive care unit of Vinogradov City Clinical Hospital in Moscow, Russia.

In this photo taken on Tuesday, April 21, medical workers put on protective gear in order to assist coronavirus patients at the intensive care unit of Vinogradov City Clinical Hospital in Moscow, Russia. Reports of Russian medical workers becoming infected with the coronavirus are emerging almost daily as the country copes with a growing number of patients.

In this photo taken on Tuesday, April 21, a medical worker puts on protective gear in order to assist coronavirus patients at the intensive care unit of Vinogradov City Clinical Hospital in Moscow, Russia.

MOSCOW — A patient who had routine surgery at a hospital in St. Petersburg suddenly developed a fever after an operation. Doctors insisted on testing him for coronavirus and results showed that he had it.

And so did the Russian doctors, nurses and other patients who had unwittingly come in contact with him.

“It just snowballed from there,” said Dr. Dmitry Ptashnikov, head of the spinal surgery ward at the Vreden Institute for Traumatology and Orthopedics and one of the many medical workers who became infected. More than half of its staff and patients — dozens in all — eventually tested positive for COVID-19.

Reports of infected medical workers are emerging almost daily as Russia copes with the virus. Last week alone, more than 200 doctors in Moscow and St. Petersburg were reported to have it, with some turning to social media to make their plight known.

It’s unclear how many Russian doctors and nurses overall have been infected. The Health Ministry did not respond to requests for comment but news reports from a dozen regions in the past two weeks suggest at least 450 medical workers have had COVID-19, with 11 doctors and five nurses dying.

The number is likely to be much higher because hospital officials often hide such infections, said Semyon Galperin, head of the Doctors Defense League.

“I know of cases of hospital administrations not reporting medics getting infected because it may lead to sealing off the facility for quarantine and halting its operations,” Galperin told The Associated Press.

The number of coronavirus cases in Russia has risen quickly to more than 87,000 with nearly 800 deaths, although some in the West question the accuracy of those reports. Most of Russia’s big cities have been locked down since March 30 under measures set to expire Thursday.

Of 285 virus hot spots in the country, medical facilities account for more than half, said Deputy Prime Minister Tatyana Golikova.

As cases rise, widespread shortages of personal protective equipment and questionable infection control procedures are becoming the biggest challenges in Russia. The Kremlin insists there are only isolated shortages.

“We only had regular surgical gowns, masks, gloves,” Ptashnikov told the AP. “Later we received proper protective equipment, but it was, unfortunately, a bit too late.’’

Russia inherited a robust health care network from Soviet times — about 5,300 hospitals and 1.1 million beds, the third largest amount of both in the world, according to the Organization of Economic Cooperation and Development. That provided a big head start when the outbreak was still in its early stages.

By late March, about 80,000 beds were available. A little over half were occupied as of last week, officials said, and more beds are being prepared.

“To Russia’s credit, so far, except in a couple of the most overloaded hospitals in Moscow, we’re not hearing stories of inadequate capacity,” said Judy Twigg, a professor at Virginia Commonwealth University and senior associate at the Center for Strategic and International Studies.

“We worry a lot about shortages of personal protective equipment, distribution of that equipment to the right places at the right time. And we worry about infection control procedures within health care facilities,” she told the AP.

Since the outbreak began, Russian health officials have been dividing hospitals into those treating coronavirus patients and those that aren’t. In Moscow, which has almost 52% of confirmed cases, 29 hospitals out of almost 100 have been repurposed and 24 more are being prepared. In St. Petersburg, 12 hospitals out of more than 30 are being converted.

The hospitals get protective gear, and wards with virus patients are divided into “dirty” and “clean” zones, with patients and staff tested regularly.

Yelena Sibikina, head of internal medicine in a coronavirus ward at Moscow’s Vinogradov Hospital No. 64, said the staff rehearsed protocols for two weeks before infected patients were admitted. Its 280 beds — including 36 in the intensive care unit — filled up in days. It is adequately stocked with protective suits, face masks, goggles, gloves and shoe covers.

But doctors say the hospitals not treating virus patients lack proper procedures or supplies, putting those workers at risk if an infected person is admitted.

“There are no protocols in place for dividing patients, there is no special protective equipment for medics. … The chances of getting sick are very high,” Dr. Alexei Erlikh, a Moscow cardiologist, told the AP.

Five wards at Moscow City Hospital No. 29, which is not yet ready for coronavirus patients, had to be shut down for quarantine, Erlikh said. The cardiac ICU he heads was sealed off last week after about a third of its staff got infected.

St. Petersburg’s Pokrovsky hospital was initially repurposed for treating pneumonia cases, but staff there immediately complained about needing protective equipment. City officials responded they didn’t need such gear for treating pneumonia — yet four days later, six patients were diagnosed with coronavirus. Only after a series of media appearances and videos sent to the government did workers get what they wanted. Now the hospital officially treats coronavirus patients.

“It was hard. Only us joining forces helped,” Sergey Sayapin, an ICU specialist at the hospital, told the AP. He and four colleagues are being treated for COVID-19 that they caught at work.

As more Russian doctors speak out, it is difficult to keep the problem under wraps. Such complaints have grown in recent weeks, with social media filled with messages of outrage and videos of doctors pleading for help.

On Monday, about 50 workers at the Mariinsky hospital in St. Petersburg were reported to have been infected, and workers at two hospitals in the Moscow suburbs lodged complaints last week after dozens of doctors and nurses also got COVID-19.

Ptashnikov’s hospital was quarantined April 9 and many medical workers and patients are still locked inside.

“Cynical as this may sound, we should first and foremost take care of doctors and medical personnel, not the patients,” he said, “because if they are out of commission, then no one will be able to treat anyone.”