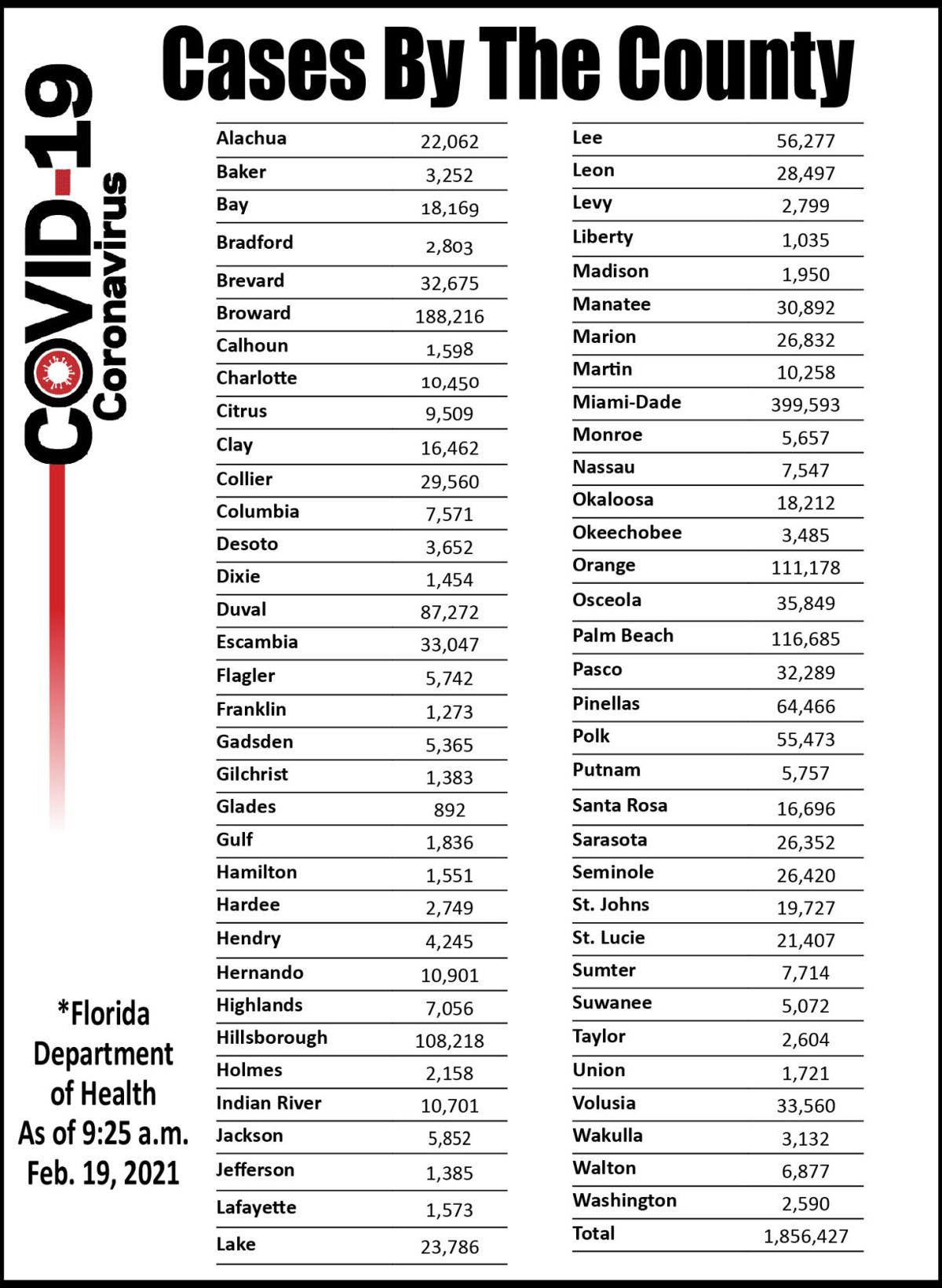 Of the 24 new cases, three children were in the 0-4 age range for the second day in a row. That’s six cases in the age group that only has 111 cases. The six cases make up 5.4% of the total cases.

In addition, there were two more children in the 5-14 year-old range. The five new cases 14 and under cases on Friday make up 20.8% of the day’s new cases.

There has been two more deaths reported by FDOH. The death toll has risen to 294 people whose deaths have been attributed to COVID.

Testing remained low at 326 processed with 303 negative reports. The daily positivity rate was down quite a bit to 7.06% from the previous day.

There have been 557 hospitalizations so far. According to the Agency for Health Care Administration, there were 35 people hospitalized at 3:02 p.m. Friday. AHCA also reported the county’s adult ICU beds census was at 21 with five beds available.

The long-term care facilities gained another case of coronavirus and the total count sits at 650. Corrections was still at 116 cases of infection on Friday.

The cases of infections are divided by 1,822,644 residents and 33,783 non-residents that have tested positive.

In Florida, deaths from COVID-19 shattered the 30,000 mark. Overnight, the deaths continued to rise and 224 deaths were attributed to the coronavirus. Of those 224 deaths, six were non-residents and 218 people were residents. Deaths throughout the pandemic are now 30,214 with 516 non-residents and 29,692 residents.

Florida continues to lead the nation in cases of the UK virus variant. The Sunshine State has seen 433 of the 1,523 B.1.1.7 variant cases that have been detected in the U.S.

The CDC also reported Florida has its first case of the P.1 variant, or the Brazil variant as it is more commonly called. Just five cases have been seen in the U.S., with the variant appearing in four different states so far.

Cases continue to be low in the United States, as the COVID Tracking Project’s Thursday night report showed a total of 66,824 cases. The rolling seven-day average is now 72,589, which is down 25% from last week.

Deaths haven’t dropped at the same rate, however, and there were 2,616 new deaths reported. With several days featuring lower rates earlier in the week, the rolling seven-day average of 1,998 is 20% lower than last week.

Numbers coming out of Texas are likely lower than the actual counts, as the state continues to battle the weather. Texas Health and Human Services addressed this on the state’s dashboard with the following message, “Winter weather is affecting the reporting of new COVID-19 cases and fatalities across many jurisdictions. New case counts will be artificially low until reporting resumes.”

Early numbers Friday don’t look much different than what has been seen the previous couple of days, with California reporting 6,798 new cases and 420 deaths, while Arizona checked in with 1,918 new cases and 145 deaths.

According to the Johns Hopkins University Center for Systems Science and Engineering, the U.S. has seen 27.94 million cases and had 494,151 deaths.

Globally, there have been 110.5 million cases and 2.48 million deaths.