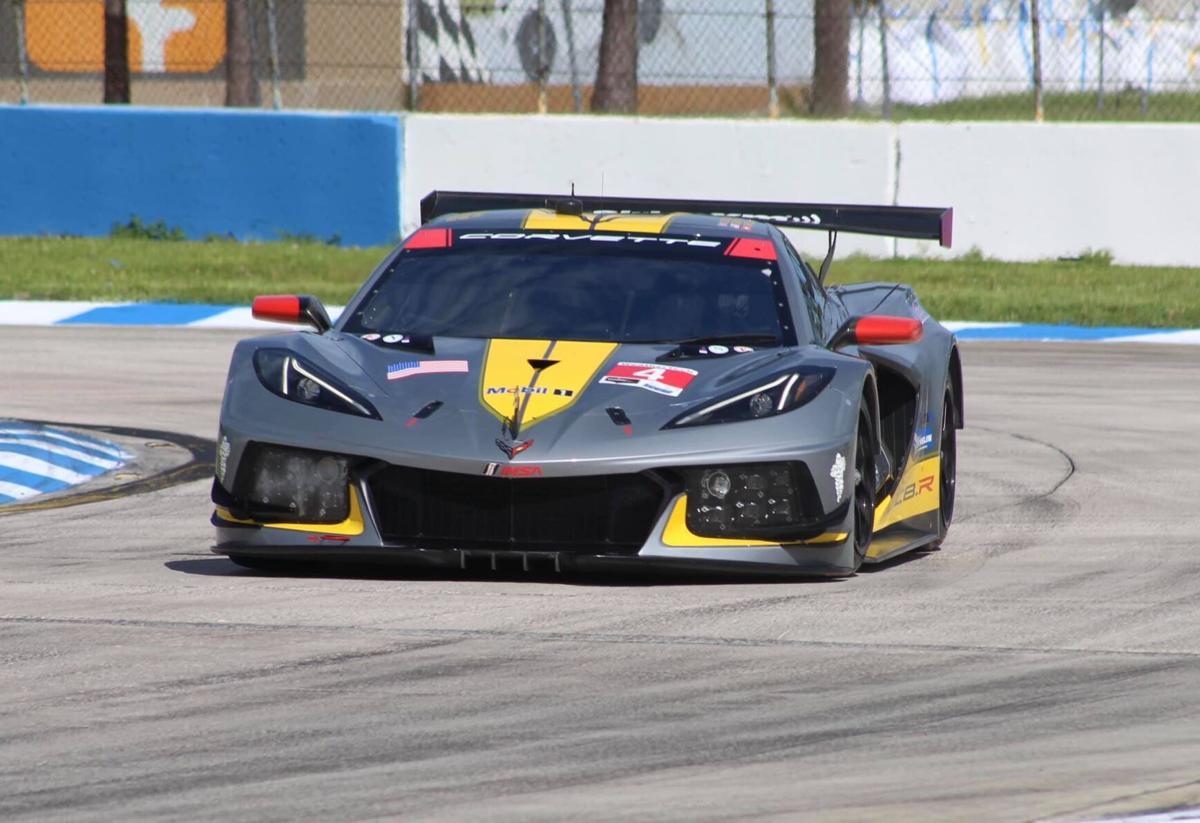 The No. 4 Corvette Racing C8.R on the way to victory in the GTLM class. 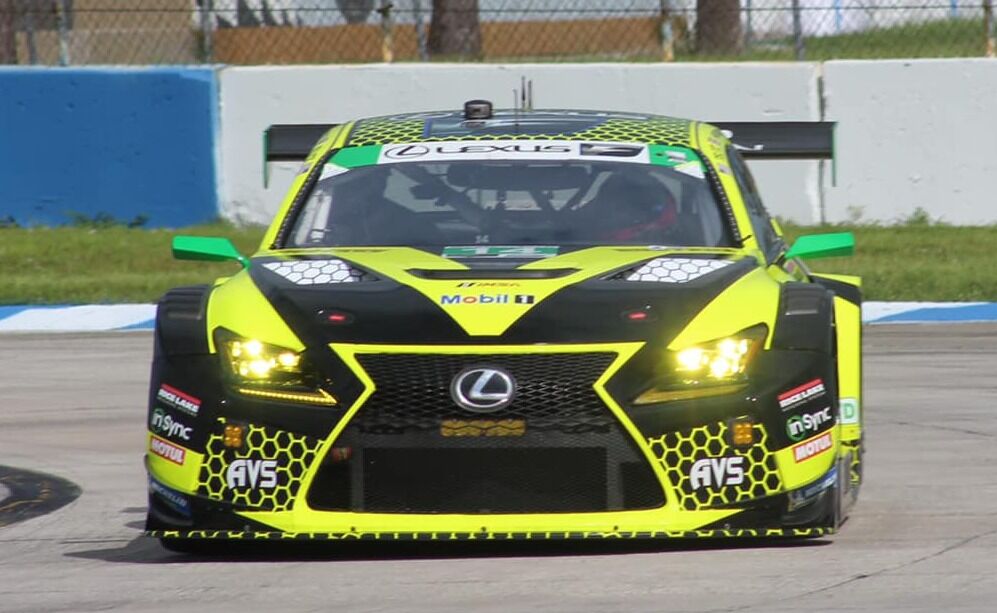 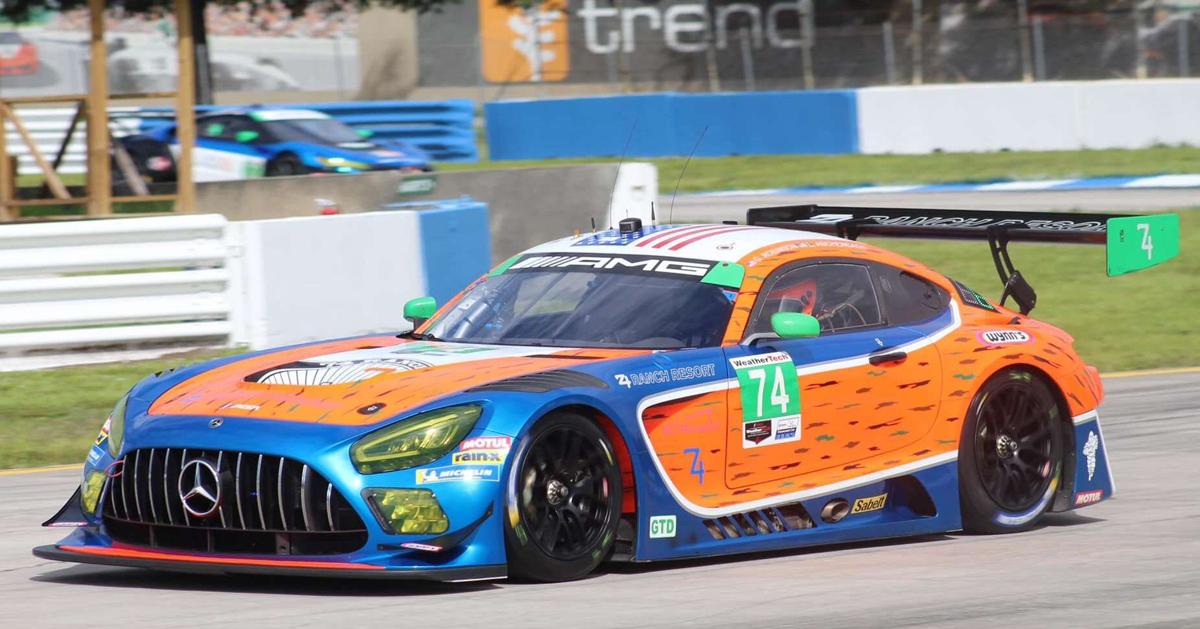 The No. 74 Riley Motorsports Mercedes-AMG races at Sebring.

The No. 4 Corvette Racing C8.R on the way to victory in the GTLM class.

The No. 74 Riley Motorsports Mercedes-AMG races at Sebring.

It took more than two years for Corvette Racing’s IMSA win total to go from 99 to 100 and just two weeks to make it 101.

Oliver Gavin and Tommy Milner scored the Cadillac Grand Prix of Sebring victory in the GT Le Mans (GTLM) class aboard the silver No. 4 Corvette C8.R, leading a 1-2 sweep for the Michigan-based squad. Milner held off a charging Antonio Garcia by a scant 0.480 seconds ahead to score his and Gavin’s first victory since the 2018 Acura Grand Prix of Long Beach.

“It was close there at the end,” Milner said. “Olly did a great job of saving fuel and that allowed us to get out ahead of the (No.) 3 car. It was a great strategy from Chuck (Houghton, race engineer) and great pit stops from Brian (Hoye, car chief) and the whole crew. To have these Corvette C8.Rs in as good as shape as they were after the long break is a testament to everyone on this team.”

It was Gavin’s 49th IMSA premier series victory, moving him into a three-way tie for fourth on the all-time IMSA win list with the legendary Al Holbert and Butch Leitzinger. It was Milner’s 17th IMSA win and his and Gavin’s seventh win in IMSA WeatherTech SportsCar Championship competition.

“It’s been an amazing day,” Gavin said. “Thanks to Corvette Racing and Tommy for doing a wonderful job to bring the car home at the end. It was the strategy and pit stops that made the difference. Our guys did an outstanding job throughout the race.

“Our Corvette C8.R has really come alive in the last two races. It was a great result for the No. 3 Corvette to get the 100th victory in IMSA for Corvette Racing at Daytona. For us to get No. 101 and my 49th in IMSA is fantastic. A great day.”

For the first two hours of the two-hour, 40-minute race, it looked like Jordan Taylor, who qualified on pole earlier Saturday afternoon, and Garcia would score their second win in as many races. Taylor kept Gavin in his mirrors before giving way to Garcia just before the two-hour mark but the No. 4 leapfrogged their No. 3 teammates, which took just a bit more time on pit lane.

Nevertheless, the runner-up result moved the Garcia and Taylor to the top of the WeatherTech Championship GTLM standings with three races now in the books.

A pit-lane kerfuffle with just over two hours remaining effectively removed both Porsche GT Team entries from victory contention. Nick Tandy’s No. 911 Porsche was sandwiched between Gavin and Laurens Vanthoor’s No. 912 Porsche 911 RSR-19, leaving Vanthoor without nose bodywork and Tandy with an eventual cut tire. However, Vanthoor and co-driver Earl Bamber recovered to finish third.

Next up for the WeatherTech Championship is the annual visit to Road America for a two-hour, 40-minute battle on Saturday, Aug. 2. The race will be televised live on NBC network beginning at 12 p.m. ET.

Lexus Victorious at Sebring in GTD

The No. 14 AIM Vasser Sullivan Lexus RC F GT3 has done it again.

Telitz started second after qualifying just .067 seconds behind teammate Frankie Montecalvo in the No. 12 Lexus. However, the Wisconsinite quickly found his way to the front on Lap 12 of the 3.74-mile circuit.

It was a crucial final pit stop that put the team in prime position to collect its second victory of 2020. Hawksworth got out in front of the GTD field and only mere car lengths in front of Bill Auberlen, in search of his 61st IMSA victory in the No. 96 Turner Motorsport BMW M6 GT3.

The Brit then opened a gap and sailed away to the win.

“The car was brilliant today and to be honest the strategy was perfect,” said Hawksworth. “The decisions on pit lane, the decision to take four tires at the first stop, put full fuel in for the second and short fill the last, made all the difference. So yeah, the championship is on the line for sure.”

“I mean honestly could it get any better than this at all?” said Telitz, who was named as the car’s second full-time driver just last month. “Two race wins, first two races full time. Obviously, our Lexus RC F GTD car was just incredible today. We had to go through the field once there after the first round of pit stops, and then handed it off to Jack and he did an awesome job bringing it home.”

Cooper MacNeil and Toni Vilander continued their Sebring success on Saturday night, finishing second in the No. 63 Scuderia Corsa / WeatherTech Racing Ferrari 488 GT3. The runner-up finish extended their podium streak at Sebring to three consecutive years, after finishing on the GTD podium at the Mobil 1 Twelve Hours of Sebring Presented by Advance Auto Parts in both 2018 and 2019.

Auberlen’s quest to become the winningest driver in IMSA wasn’t achieved today, but he and co-driver Robby Foley held on for a third-place result.

Making it four different manufacturers in the top four was the No. 74 Mercedes-AMG GT3 of Lawson Aschenbach and Gar Robinson for Riley Motorsports, their highest finish of the season.