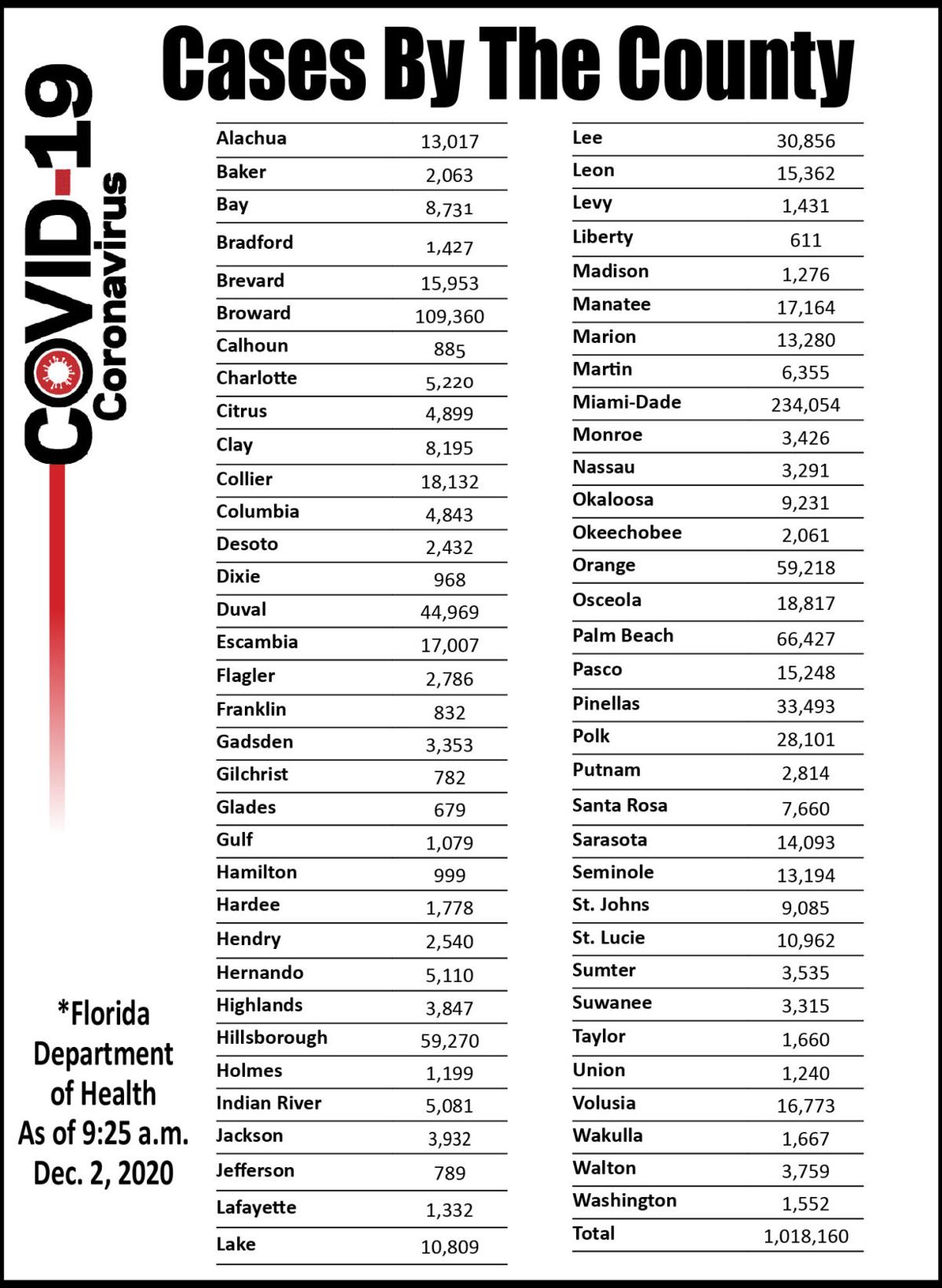 SEBRING — The Florida Department of Health COVID-19 case report shows a significant increase in COVID-19 new cases on Wednesday, with a jump of 9,994 infections. That is a difference of 1,147 from the previous day. Wednesday’s daily increase is the highest it has been since Nov. 25.

The daily median age remains stable at 40, which matches the overall median average as well. Hospitalizations were at 55,567, or 6%, of all cases. Long-term care facilities in the state have had 55,873 cases, which is 6% of all cases.

Unfortunately, there were an additional 96 deaths overnight to bring the death toll to 19,012. The deaths are split by 18,776 residents and 236 residents.

Countywide, there has been 45 cases of new infection added to Wednesday’s report, which has brought the overall total to 3,847 infections. One more non-resident has become infected in the county. The non-residents make up 28 people infected versus 3,819 residents infected.

The FDOH Dashboard shows 454 tests processed on Tuesday with 409 test results were negative. The new cases and tests processed gave a daily positivity of 9.91%. That is significantly better than the 17.22% the day before.

One additional death has been added to the county and the new total is at 149 people whose deaths are attributed to COVID-19. The correctional facility has added to its caseload and now has 72 cases of infection to report.

There have been 386 hospitalizations overall in the county. On Wednesday, there were 57 people hospitalized with COVID-19 as the main diagnosis, according to the Agency for Health Care Administration. AHCA also showed the ICU bed census at 24 with five beds or 17.24% availability. The county’s bed census was 232 with 28 beds or nearly 11% availability.

None of Florida’s 67 counties had zero increases.

The national numbers weren’t pretty once again, with the COVID Tracking Project showing a third-straight day of record hospitalizations. In its Tuesday evening report, there were a total of 98,691 hospitalizations.

California continues to be hit hard, with 20,759 new cases reported on Wednesday morning by the California Department of Public Health. That brings its total to 1,245,948 cases. There were also 113 new deaths, bringing the total to 19,324.

California’s cases came on just 137,813 tests, yielding a positivity rate of 15% for the state.

Globally, the numbers continue to climb at a high rate. After the United States, Brazil was the second hardest-hit country, reporting 48,124 new cases.