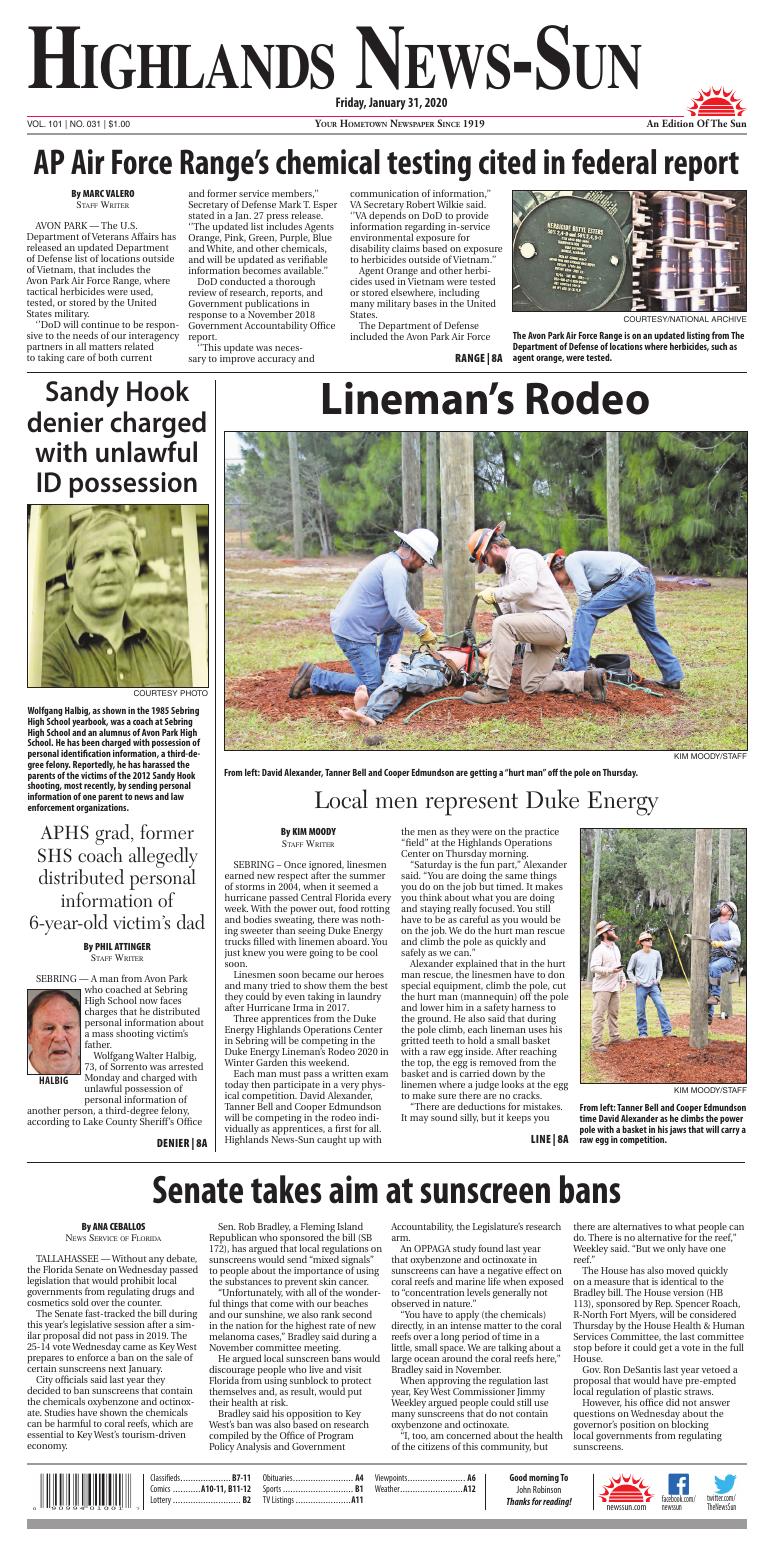 The Avon Park Air Force Range is on an updated listing from The Department of Defense of locations where herbicides, such as agent orange, were tested.

AVON PARK — The U.S. Department of Veterans Affairs has released an updated Department of Defense list of locations outside of Vietnam, that includes the Avon Park Air Force Range, where tactical herbicides were used, tested, or stored by the United States military.

‘’DoD will continue to be responsive to the needs of our interagency partners in all matters related to taking care of both current and former service members,’’ Secretary of Defense Mark T. Esper stated in a Jan. 27 press release. ‘’The updated list includes Agents Orange, Pink, Green, Purple, Blue and White, and other chemicals, and will be updated as verifiable information becomes available.’’

DoD conducted a thorough review of research, reports, and Government publications in response to a November 2018 Government Accountability Office report.

‘’This update was necessary to improve accuracy and communication of information,’’ VA Secretary Robert Wilkie said. ‘’VA depends on DoD to provide information regarding in-service environmental exposure for disability claims based on exposure to herbicides outside of Vietnam.’’

Agent Orange and other herbicides used in Vietnam were tested or stored elsewhere, including many military bases in the United States.

• March and April 1955 — Chemicals were applied with a hand sprayer to a 16-square-foot area around individual or multiple plants.

The Avon Park Air Force Range, with 106,034 acres, is the largest bomb and gunnery range east of the Mississippi.

From left: David Alexander, Tanner Bell and Cooper Edmundson are getting a “hurt man” off the pole on Thursday.

From left: Tanner Bell and Cooper Edmundson time David Alexander as he climbs the power pole with a basket in his jaws that will carry a raw egg in competition.

David Alexander climbs a practice power pole at Duke Energy as he prepares for Saturday’s rodeo.

SEBRING – Once ignored, linesmen earned new respect after the summer of storms in 2004, when it seemed a hurricane passed Central Florida every week. With the power out, food rotting and bodies sweating, there was nothing sweeter than seeing Duke Energy trucks filled with linemen aboard. You just knew you were going to be cool soon.

Linesmen soon became our heroes and many tried to show them the best they could by even taking in laundry after Hurricane Irma in 2017.

Each man must pass a written exam today then participate in a very physical competition. David Alexander, Tanner Bell and Cooper Edmundson will be competing in the rodeo individually as apprentices, a first for all. Highlands News-Sun caught up with the men as they were on the practice “field” at the Highlands Operations Center on Thursday morning.

“Saturday is the fun part,” Alexander said. “You are doing the same things you do on the job but timed. It makes you think about what you are doing and staying really focused. You still have to be as careful as you would be on the job. We do the hurt man rescue and climb the pole as quickly and safely as we can.”

Alexander explained that in the hurt man rescue, the linesmen have to don special equipment, climb the pole, cut the hurt man (mannequin) off the pole and lower him in a safety harness to the ground. He also said that during the pole climb, each lineman uses his gritted teeth to hold a small basket with a raw egg inside. After reaching the top, the egg is removed from the basket and is carried down by the linemen where a judge looks at the egg to make sure there are no cracks.

“There are deductions for mistakes. It may sound silly, but it keeps you cautious and deliberate. It’s fun to get to see how you measure up; it’s a competitive mindset,” Alexander said, explaining that the men had each other’s back. “There is a brotherhood — a camaraderie. You can work long hours and it’s simple to make mistakes that could be life altering.”

Ana Gibbs, Corporate Communications with Duke, said there are two mystery competitions the men will have to compete in on Saturday. She also said the competition is exciting because the winners will go to Kansas City where the top compete in the international “Olympics” against other utilities.

“Duke Energy’s seniors won the international competition last year,” she said. “We are very proud of that.”

Gibbs explained the industry can be potentially dangerous with long hours.

“This career is for those with a heart of service,” she said. “They all have families that they leave during a storm. As a company, we recognize that. I say,’they are headed into a storm while everyone else heads out it.’”

Alexander said his job does offer him the instant gratification of seeing the lights back on.

TALLAHASSEE — Without any debate, the Florida Senate on Wednesday passed legislation that would prohibit local governments from regulating drugs and cosmetics sold over the counter.

The Senate fast-tracked the bill during this year’s legislative session after a similar proposal did not pass in 2019. The 25-14 vote Wednesday came as Key West prepares to enforce a ban on the sale of certain sunscreens next January.

City officials said last year they decided to ban sunscreens that contain the chemicals oxybenzone and octinoxate. Studies have shown the chemicals can be harmful to coral reefs, which are essential to Key West’s tourism-driven economy.

Sen. Rob Bradley, a Fleming Island Republican who sponsored the bill (SB 172), has argued that local regulations on sunscreens would send “mixed signals” to people about the importance of using the substances to prevent skin cancer.

“Unfortunately, with all of the wonderful things that come with our beaches and our sunshine, we also rank second in the nation for the highest rate of new melanoma cases,” Bradley said during a November committee meeting.

He argued local sunscreen bans would discourage people who live and visit Florida from using sunblock to protect themselves and, as result, would put their health at risk.

Bradley said his opposition to Key West’s ban was also based on research compiled by the Office of Program Policy Analysis and Government Accountability, the Legislature’s research arm.

An OPPAGA study found last year that oxybenzone and octinoxate in sunscreens can have a negative effect on coral reefs and marine life when exposed to “concentration levels generally not observed in nature.”

“You have to apply (the chemicals) directly, in an intense matter to the coral reefs over a long period of time in a little, small space. We are talking about a large ocean around the coral reefs here,” Bradley said in November.

When approving the regulation last year, Key West Commissioner Jimmy Weekley argued people could still use many sunscreens that do not contain oxybenzone and octinoxate.

“I, too, am concerned about the health of the citizens of this community, but there are alternatives to what people can do. There is no alternative for the reef,” Weekley said. “But we only have one reef.”

The House has also moved quickly on a measure that is identical to the Bradley bill. The House version (HB 113), sponsored by Rep. Spencer Roach, R-North Fort Myers, will be considered Thursday by the House Health & Human Services Committee, the last committee stop before it could get a vote in the full House.

However, his office did not answer questions on Wednesday about the governor’s position on blocking local governments from regulating sunscreens.

Wolfgang Halbig, as shown in the 1985 Sebring High School yearbook, was a coach at Sebring High School and an alumnus of Avon Park High School. He has been charged with possession of personal identification information, a third-degree felony. Reportedly, he has harassed the parents of the victims of the 2012 Sandy Hook shooting, most recently, by sending personal information of one parent to news and law enforcement organizations.

SEBRING — A man from Avon Park who coached at Sebring High School now faces charges that he distributed personal information about a mass shooting victim’s father.

Wolfgang Walter Halbig, 73, of Sorrento was arrested Monday and charged with unlawful possession of personal information of another person, a third-degree felony, according to Lake County Sheriff’s Office booking reports.

He has made national news in the last eight years as a former contributor to Infowars, the online and radio show hosted by the far-right provocateur Alex Jones. For years, the two have spread false claims that the Dec. 14, 2012, shooting of 20 first graders and six educators in Newtown, Conn., was an elaborate government hoax to justify confiscation of Americans’ firearms.

According to a New York Times article on the arrest, when challenged or confronted by Sandy Hook families, Halbig has released their personal information, taunted them or emailed them photographs of what he claimed to be their dead children “all grown up.”

His arrest came from a Oct. 30, 2019 complaint filed by Leonard Pozner, whose son Noah, 6, died in the shooting.

In the complaint to Lake County Sheriff’s Office, Halbig has harassed Pozner over the internet since Feb. 18, 2018.

Pozner lives in hiding, and has founded HONR, a network of volunteers who seek to expunge online content targeting the victims of tragedy.

“We are gratified that prolific Sandy Hook hoaxer and serial harasser of the families of victims Wolfgang Halbig has been arrested,” said Pozner in news reports. “For five years, he has used my most personal and private details to incentivize and enable other hoaxers and conspiracy theorists to hunt, abuse and terrorize myself and my family.”

Pozner told the New York Times there is still a long way to go, but called Halbig’s arrest “a positive step in the right direction.”

Halbig posted a $5,000 cash bond and has a Feb. 24 court date in Lake County, according to local news reports.

The charge carries a maximum penalty of a year in prison.

In Highlands County, when local residents heard the news via social media, many recalled how Halbig played varsity football at Avon Park High School from 1963 to 1965, when he graduated.

Others recalled him as a coach at Sebring High School in the mid- to late-1980s, whether for physical education, weight training or varsity football.

According to news reports, Halbig has sent hundreds of public records requests to Newtown and Connecticut officials, demanding documentation of the Sandy Hook shooting, including photographs of the murder scene and/or children’s bodies and photocopies of cleanup receipts

Halbig is among a handful of so-called Sandy Hook hoaxers to be prosecuted.

In 2017, Lucy Richards of Brandon, after repeatedly threatening Pozner’s life, pleaded guilty to sending threats via interstate communications and was jailed for five months, the New York Times reported.

Now on parole, she is forbidden from visiting Infowars and other conspiracy theory websites. 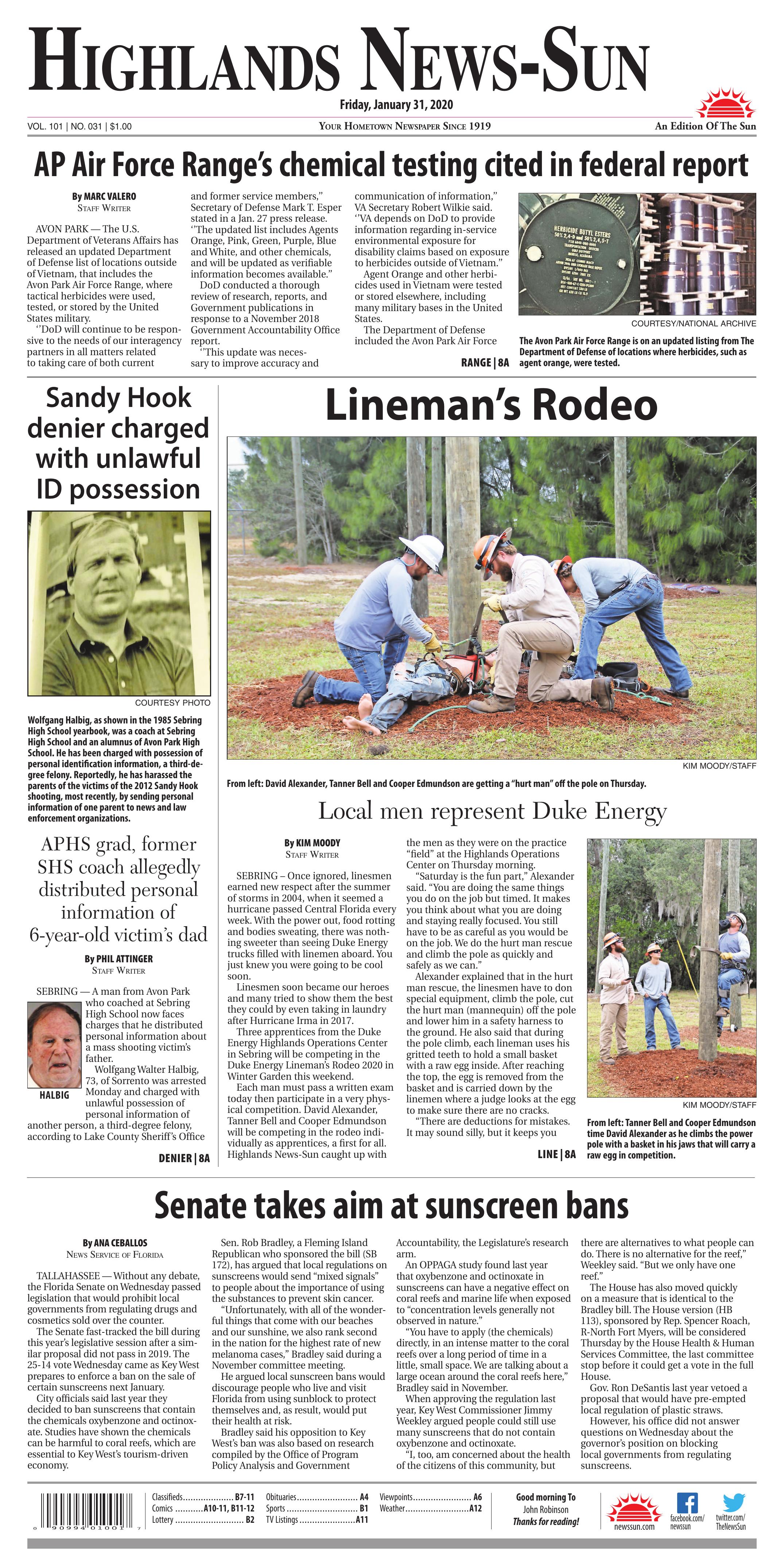