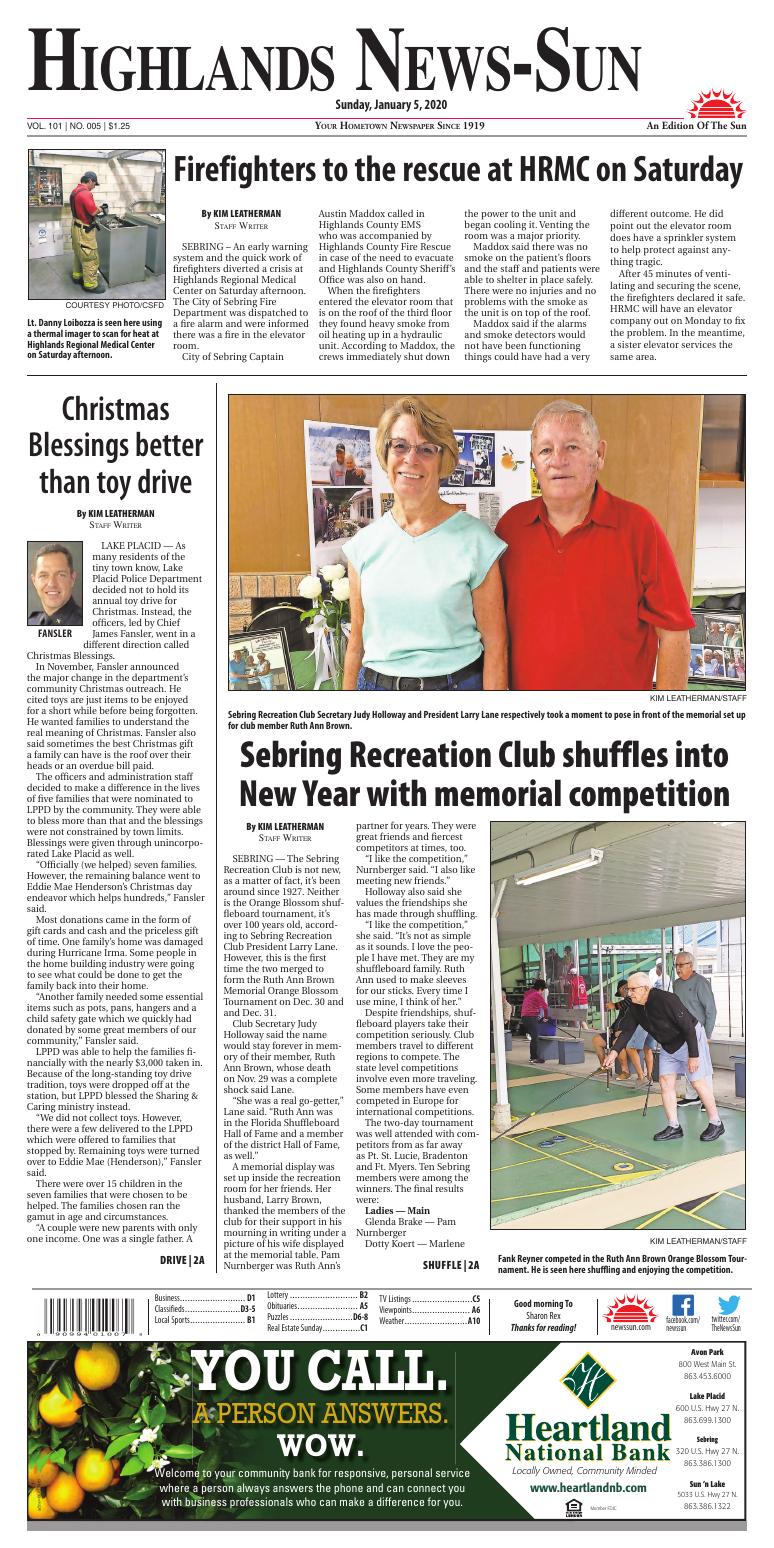 SEBRING – An early warning system and the quick work of firefighters diverted a crisis at Highlands Regional Medical Center on Saturday afternoon. The City of Sebring Fire Department was dispatched to a fire alarm and were informed there was a fire in the elevator room.

When the firefighters entered the elevator room that is on the roof of the third floor they found heavy smoke from oil heating up in a hydraulic unit. According to Maddox, the crews immediately shut down the power to the unit and began cooling it. Venting the room was a major priority.

Maddox said there was no smoke on the patient’s floors and the staff and patients were able to shelter in place safely. There were no injuries and no problems with the smoke as the unit is on top of the roof.

Maddox said if the alarms and smoke detectors would not have been functioning things could have had a very different outcome. He did point out the elevator room does have a sprinkler system to help protect against anything tragic.

After 45 minutes of ventilating and securing the scene, the firefighters declared it safe. HRMC will have an elevator company out on Monday to fix the problem. In the meantime, a sister elevator services the same area.

Fank Reyner competed in the Ruth Ann Brown Orange Blossom Tournament. He is seen here shuffling and enjoying the competition.

Ruth Ann Brown played the dulcimer with Conway Twitty. Her recent death inspired the Sebring Recreation Club members to name a shuffleboard tournament after her.

SEBRING — The Sebring Recreation Club is not new, as a matter of fact, it’s been around since 1927. Neither is the Orange Blossom shuffleboard tournament, it’s over 100 years old, according to Sebring Recreation Club President Larry Lane. However, this is the first time the two merged to form the Ruth Ann Brown Memorial Orange Blossom Tournament on Dec. 30 and and Dec. 31.

Club Secretary Judy Holloway said the name would stay forever in memory of their member, Ruth Ann Brown, whose death on Nov. 29 was a complete shock said Lane.

“She was a real go-getter,” Lane said. “Ruth Ann was in the Florida Shuffleboard Hall of Fame and a member of the district Hall of Fame, as well.”

A memorial display was set up inside the recreation room for her friends. Her husband, Larry Brown, thanked the members of the club for their support in his mourning in writing under a picture of his wife displayed at the memorial table. Pam Nurnberger was Ruth Ann’s partner for years. They were great friends and fiercest competitors at times, too.

Holloway also said she values the friendships she has made through shuffling.

“I like the competition,” she said. “It’s not as simple as it sounds. I love the people I have met. They are my shuffleboard family. Ruth Ann used to make sleeves for our sticks. Every time I use mine, I think of her.”

Despite friendships, shuffleboard players take their competition seriously. Club members travel to different regions to compete. The state level competitions involve even more traveling. Some members have even competed in Europe for international competitions.

The two-day tournament was well attended with competitors from as far away as Pt. St. Lucie, Bradenton and Ft. Myers. Ten Sebring members were among the winners. The final results were:

The Sebring Recreation Club is located at 333 Pomegranate Ave. In addition to shuffleboard, the club offers card playing, line dancing, table tennis, wood carving, and other social events. For more information on the club visit the website at sebringrecreationclub.org or call 828-777-4861.

LAKE PLACID — As many residents of the tiny town know, Lake Placid Police Department decided not to hold its annual toy drive for Christmas. Instead, the officers, led by Chief James Fansler, went in a different direction called Christmas Blessings.

In November, Fansler announced the major change in the department’s community Christmas outreach. He cited toys are just items to be enjoyed for a short while before being forgotten. He wanted families to understand the real meaning of Christmas. Fansler also said sometimes the best Christmas gift a family can have is the roof over their heads or an overdue bill paid.

The officers and administration staff decided to make a difference in the lives of five families that were nominated to LPPD by the community. They were able to bless more than that and the blessings were not constrained by town limits. Blessings were given through unincorporated Lake Placid as well.

Most donations came in the form of gift cards and cash and the priceless gift of time. One family’s home was damaged during Hurricane Irma. Some people in the home building industry were going to see what could be done to get the family back into their home.

“Another family needed some essential items such as pots, pans, hangers and a child safety gate which we quickly had donated by some great members of our community,” Fansler said.

LPPD was able to help the families financially with the nearly $3,000 taken in. Because of the long-standing toy drive tradition, toys were dropped off at the station, but LPPD blessed the Sharing & Caring ministry instead.

“We did not collect toys. However, there were a few delivered to the LPPD which were offered to families that stopped by. Remaining toys were turned over to Eddie Mae (Henderson),” Fansler said.

There were over 15 children in the seven families that were chosen to be helped. The families chosen ran the gamut in age and circumstances.

“A couple were new parents with only one income. One was a single father. A couple were grandparents raising their grandchildren,” Fansler said.

Fansler said the families were moved and thankful.

“They were beyond pleased. A few were overcome with joy to the point of tears,” the chief said. “It was truly an emotional time and a blessing for them.”

There were no pictures taken during the campaign as recipients were promised anonymity unless they didn’t want it. The Highlands News- Sun asked Fansler what he thought of Christmas Blessings versus the toy drive. It looks like Christmas Blessings is here to stay.

“I think this had a far greater impact in lives on people in our community. Toys for children is great and we loved doing the program,” he said. “But this year’s event was so much more. God blessed these families, allowing us to be the conduit between those wishing to bless and those needing a blessing. This was a hand up in time of giving, not a hand out. Truly, I hope this program continues for years to come.”

Fansler wanted to express his gratitude and those of the LPPD and blessing recipients to the community.

“I am thankful to all who generously donated to bring a Christmas blessing to families they may never meet” he said. “This gives hope to some hopeless, that folks really do care and are willing to do what they can when they can. I love this community.” 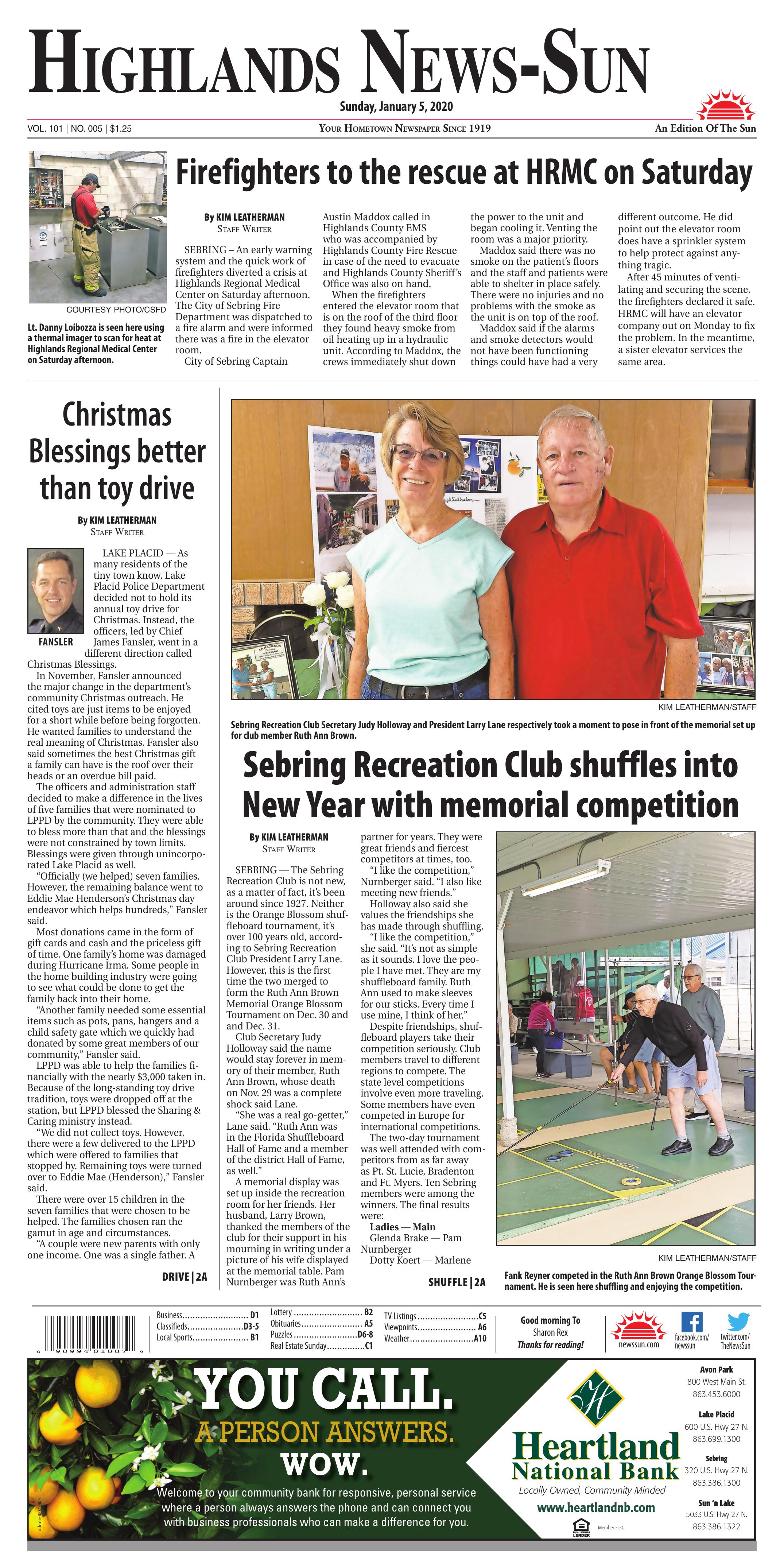