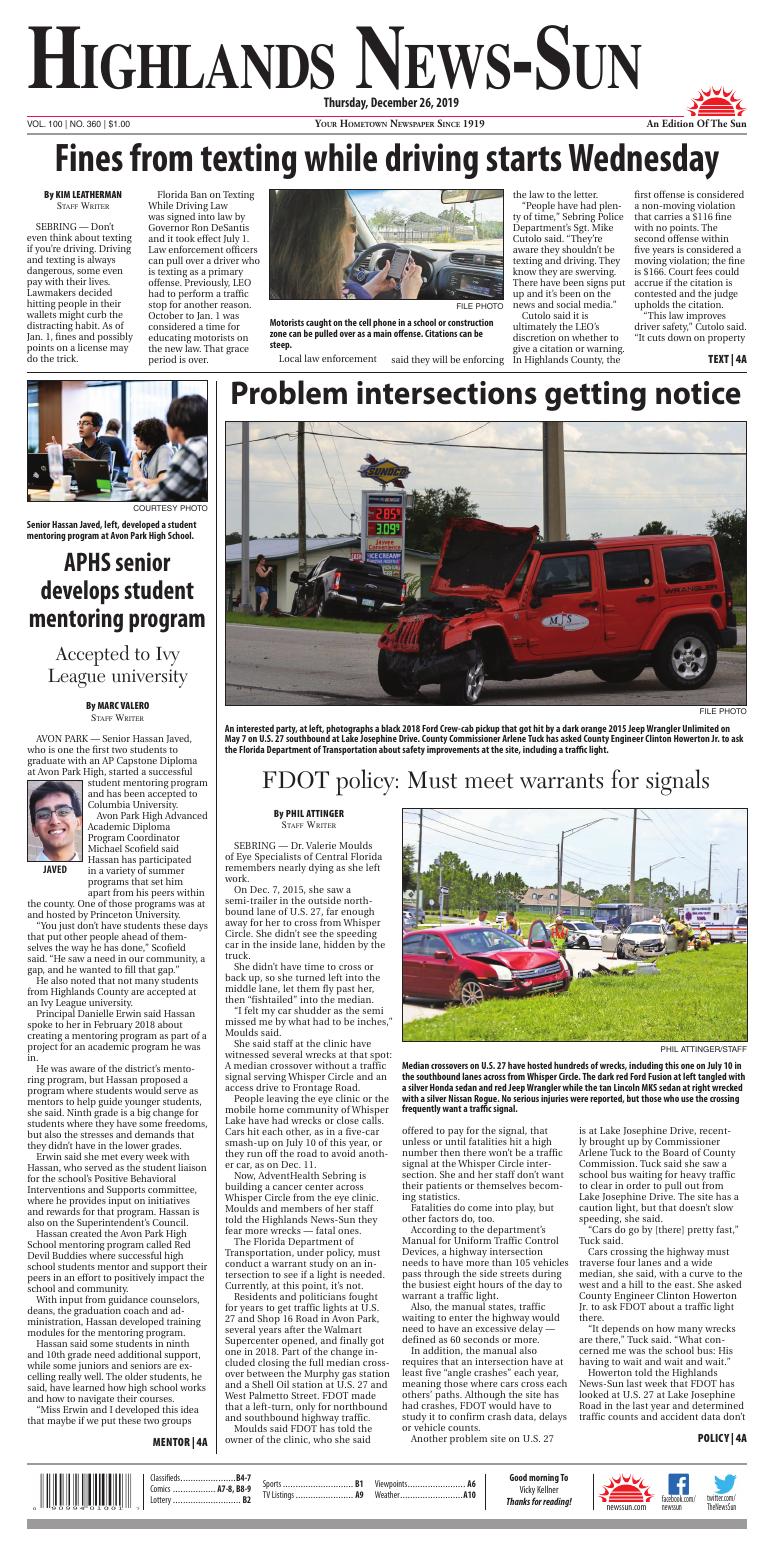 Motorists caught on the cell phone in a school or construction zone can be pulled over as a main offense. Citations can be steep.

SEBRING — Don’t even think about texting if you’re driving. Driving and texting is always dangerous, some even pay with their lives. Lawmakers decided hitting people in their wallets might curb the distracting habit. As of Jan. 1, fines and possibly points on a license may do the trick.

Florida Ban on Texting While Driving Law was signed into law by Governor Ron DeSantis and it took effect July 1. Law enforcement officers can pull over a driver who is texting as a primary offense. Previously, LEO had to perform a traffic stop for another reason. October to Jan. 1 was considered a time for educating motorists on the new law. That grace period is over.

Local law enforcement said they will be enforcing the law to the letter.

“People have had plenty of time,” Sebring Police Department’s Sgt. Mike Cutolo said. “They’re aware they shouldn’t be texting and driving. They know they are swerving. There have been signs put up and it’s been on the news and social media.”

Cutolo said it is ultimately the LEO’s discretion on whether to give a citation or warning. In Highlands County, the first offense is considered a non-moving violation that carries a $116 fine with no points. The second offense within five years is considered a moving violation; the fine is $166. Court fees could accrue if the citation is contested and the judge upholds the citation.

“This law improves driver safety,” Cutolo said. “It cuts down on property damage and death.”

Cutolo said a phone can be used for GPS navigation but he urges drivers to get a dashboard phone holder. A Bluetooth call can be taken in a school or active construction scene but there is not to be any cell phones in hands at all in those designated zones.

“Unlike many other newly enacted laws, this statute actually does a good job of covering this: (a) Improve roadway safety for all vehicle operators, vehicle passengers, bicyclists, pedestrians, and other road users. (b) Prevent crashes related to the act of text messaging while driving a motor vehicle. © Reduce injuries, deaths, property damage, health care costs, health insurance rates, and automobile insurance rates related to motor vehicle crashes.”

Fansler said a driver may legally text at a red light.

Fansler has been vocal about local traffic patterns and trends, especially around school zones. He has even made videos on stacking cars in the medians and more. A few weeks ago, he wrote on a social media site there were still many people using handheld devices in the school zone.

“It is a law that will most likely require a significant amount of citations to make a point,” Fansler said. “We will most likely offer a short window of warnings, even though the law has been advertised for the past couple of months. We will then indicate our seriousness for traffic safety by issuing citations.”

Median crossovers on U.S. 27 have hosted hundreds of wrecks, including this one on July 10 in the southbound lanes across from Whisper Circle. The dark red Ford Fusion at left tangled with a silver Honda sedan and red Jeep Wrangler while the tan Lincoln MKS sedan at right wrecked with a silver Nissan Rogue. No serious injuries were reported, but those who use the crossing frequently want a traffic signal.

An interested party, at left, photographs a black 2018 Ford Crew-cab pickup that got hit by a dark orange 2015 Jeep Wrangler Unlimited on May 7 on U.S. 27 southbound at Lake Josephine Drive. County Commissioner Arlene Tuck has asked County Engineer Clinton Howerton Jr. to ask the Florida Department of Transportation about safety improvements at the site, including a traffic light.

A motorist talks with a Highlands County sheriff’s deputy on Dec. 11, immediately after a wreck on U.S. 27 at Whisper Circle sent a Ford backward down the southbound shoulder into a storm drain. The site has a median crossover, and has hosted many local wrecks, but thus far has not warranted a traffic signal.

On Dec. 7, 2015, she saw a semi-trailer in the outside northbound lane of U.S. 27, far enough away for her to cross from Whisper Circle. She didn’t see the speeding car in the inside lane, hidden by the truck.

She didn’t have time to cross or back up, so she turned left into the middle lane, let them fly past her, then “fishtailed” into the median.

“I felt my car shudder as the semi missed me by what had to be inches,” Moulds said.

She said staff at the clinic have witnessed several wrecks at that spot: A median crossover without a traffic signal serving Whisper Circle and an access drive to Frontage Road.

People leaving the eye clinic or the mobile home community of Whisper Lake have had wrecks or close calls. Cars hit each other, as in a five-car smash-up on July 10 of this year, or they run off the road to avoid another car, as on Dec. 11.

Now, AdventHealth Sebring is building a cancer center across Whisper Circle from the eye clinic. Moulds and members of her staff told the Highlands News-Sun they fear more wrecks — fatal ones.

The Florida Department of Transportation, under policy, must conduct a warrant study on an intersection to see if a light is needed. Currently, at this point, it’s not.

Residents and politicians fought for years to get traffic lights at U.S. 27 and Shop 16 Road in Avon Park, several years after the Walmart Supercenter opened, and finally got one in 2018. Part of the change included closing the full median crossover between the Murphy gas station and a Shell Oil station at U.S. 27 and West Palmetto Street. FDOT made that a left-turn, only for northbound and southbound highway traffic.

Moulds said FDOT has told the owner of the clinic, who she said offered to pay for the signal, that unless or until fatalities hit a high number then there won’t be a traffic signal at the Whisper Circle intersection. She and her staff don’t want their patients or themselves becoming statistics.

Fatalities do come into play, but other factors do, too.

According to the department’s Manual for Uniform Traffic Control Devices, a highway intersection needs to have more than 105 vehicles pass through the side streets during the busiest eight hours of the day to warrant a traffic light.

Also, the manual states, traffic waiting to enter the highway would need to have an excessive delay — defined as 60 seconds or more.

In addition, the manual also requires that an intersection have at least five “angle crashes” each year, meaning those where cars cross each others’ paths. Although the site has had crashes, FDOT would have to study it to confirm crash data, delays or vehicle counts.

Another problem site on U.S. 27 is at Lake Josephine Drive, recently brought up by Commissioner Arlene Tuck to the Board of County Commission. Tuck said she saw a school bus waiting for heavy traffic to clear in order to pull out from Lake Josephine Drive. The site has a caution light, but that doesn’t slow speeding, she said.

“Cars do go by [there] pretty fast,” Tuck said.

Cars crossing the highway must traverse four lanes and a wide median, she said, with a curve to the west and a hill to the east. She asked County Engineer Clinton Howerton Jr. to ask FDOT about a traffic light there.

“It depends on how many wrecks are there,” Tuck said. “What concerned me was the school bus: His having to wait and wait and wait.”

Howerton told the Highlands News-Sun last week that FDOT has looked at U.S. 27 at Lake Josephine Road in the last year and determined traffic counts and accident data don’t warrant a light.

Moulds said the owner of the eye clinic had heard the same.

Howerton said he had asked FDOT yet again last week to look at the Whisper Lake crossing, and they told him they would get back to him.

Meanwhile, Monday saw yet another wreck. Florida Highway Patrol reported that at 9:15 a.m., 77-year-old Victor Peffley of Sebring was in a 2012 Ford F150 pickup, waiting to cross U.S. 27 from Whisper Circle. Bonnie Smart, 75, of Sebring, was his passenger. For unknown reasons, Peffley pulled in front of a northbound 2003 Mercedes C320, driven by 28-year-old David Jolly of Sebring.

The Mercedes hit the truck in the left side, rotating the truck clockwise and northward into the center and outside northbound lanes. The Mercedes bounded northwest, crossed the median and stopped in the inside southbound lane.

Both drivers had minor injuries and were treated at AdventHealth Sebring. Smart had no injuries, reports said.

Both vehicles left debris, tire marks and gouges on and in the pavement.

FHP cited Peffley with failure to yield the right of way.

AVON PARK — Senior Hassan Javed, who is one the first two students to graduate with an AP Capstone Diploma at Avon Park High, started a successful student mentoring program and has been accepted to Columbia University.

Avon Park High Advanced Academic Diploma Program Coordinator Michael Scofield said Hassan has participated in a variety of summer programs that set him apart from his peers within the county. One of those programs was at and hosted by Princeton University.

“You just don’t have students these days that put other people ahead of themselves the way he has done,” Scofield said. “He saw a need in our community, a gap, and he wanted to fill that gap.”

He also noted that not many students from Highlands County are accepted at an Ivy League university.

Principal Danielle Erwin said Hassan spoke to her in February 2018 about creating a mentoring program as part of a project for an academic program he was in.

He was aware of the district’s mentoring program, but Hassan proposed a program where students would serve as mentors to help guide younger students, she said. Ninth grade is a big change for students where they have some freedoms, but also the stresses and demands that they didn’t have in the lower grades.

Erwin said she met every week with Hassan, who served as the student liaison for the school’s Positive Behavioral Interventions and Supports committee, where he provides input on initiatives and rewards for that program. Hassan is also on the Superintendent’s Council.

With input from guidance counselors, deans, the graduation coach and administration, Hassan developed training modules for the mentoring program.

Hassan said some students in ninth and 10th grade need additional support, while some juniors and seniors are excelling really well. The older students, he said, have learned how high school works and how to navigate their courses.

“Miss Erwin and I developed this idea that maybe if we put these two groups together we can create something better out of this,” he said.

The program started in the fall of 2019 with the mentors meeting weekly with their mentees during lunch.

Hassan said at college he plans to pursue an education in political science and economics.

Erwin said, “We are very proud of him; he has made his mark on Avon Park High School in a very positive way.”