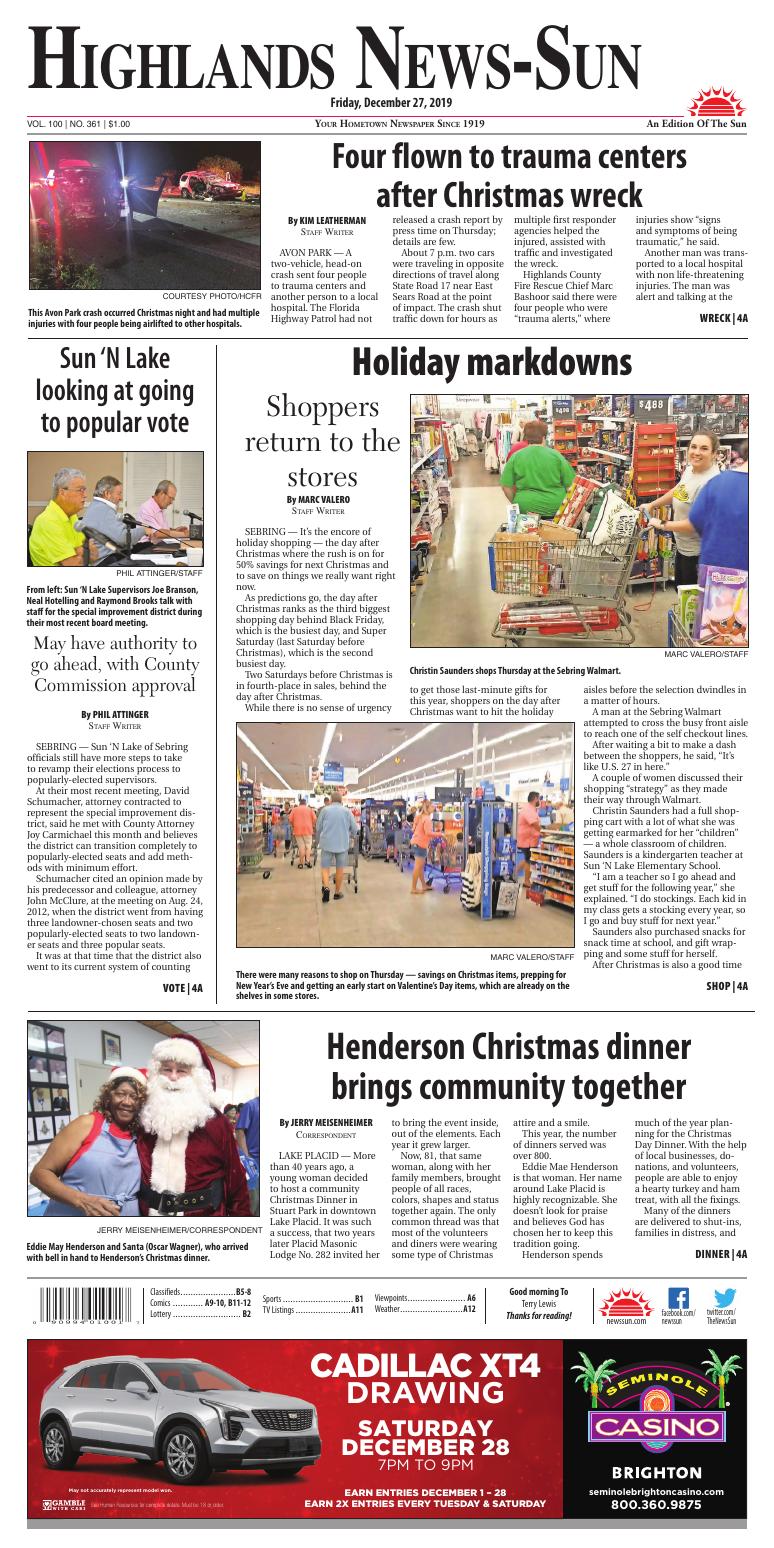 This Avon Park crash occurred Christmas night and had multiple injuries with four people being airlifted to other hospitals.

AVON PARK — A two-vehicle, head-on crash sent four people to trauma centers and another person to a local hospital. The Florida Highway Patrol had not released a crash report by press time on Thursday; details are few.

About 7 p.m. two cars were traveling in opposite directions of travel along State Road 17 near East Sears Road at the point of impact. The crash shut traffic down for hours as multiple first responder agencies helped the injured, assisted with traffic and investigated the wreck.

Highlands County Fire Rescue Chief Marc Bashoor said there were four people who were “trauma alerts,” where injuries show “signs and symptoms of being traumatic,” he said.

Another man was transported to a local hospital with non life-threatening injuries. The man was alert and talking at the scene, according to officials.

Seat belts were worn by drivers and passengers. Bashoor said the section of road does not have a strong curve. Further details will be given when the Florida Highway Patrol sends out the press release.

Four separate helicopters transported patients to trauma centers from the landing zone at Bethany Baptist Church. HCFR ground transport units from Avon Park, Sun ‘N Lake, and Sebring worked tirelessly at the scene. Highlands County Fire Rescue Units from Highlands Lakes Volunteer Fire Department and Avon Park Fire Department arrived to help in any way possible. Polk County joined in the effort by providing a fire truck and an ambulance to cover the north end of Highlands County while the south end of the county covered the remainder.

Holidays in the Highlands has been plagued with tragedy. In the early morning of Christmas Eve, a crash claimed the lives of two people on State Road 70. Last year on Christmas Day, four people were killed in a crash, also on State Road 70.

There were many reasons to shop on Thursday — savings on Christmas items, prepping for New Year’s Eve and getting an early start on Valentine’s Day items, which are already on the shelves in some stores.

SEBRING — It’s the encore of holiday shopping — the day after Christmas where the rush is on for 50% savings for next Christmas and to save on things we really want right now.

Two Saturdays before Christmas is in fourth-place in sales, behind the day after Christmas.

While there is no sense of urgency to get those last-minute gifts for this year, shoppers on the day after Christmas want to hit the holiday aisles before the selection dwindles in a matter of hours.

A man at the Sebring Walmart attempted to cross the busy front aisle to reach one of the self checkout lines.

After waiting a bit to make a dash between the shoppers, he said, “It’s like U.S. 27 in here.”

A couple of women discussed their shopping “strategy” as they made their way through Walmart.

Christin Saunders had a full shopping cart with a lot of what she was getting earmarked for her “children” — a whole classroom of children. Saunders is a kindergarten teacher at Sun ‘N Lake Elementary School.

“I am a teacher so I go ahead and get stuff for the following year,” she explained. “I do stockings. Each kid in my class gets a stocking every year, so I go and buy stuff for next year.”

Saunders also purchased snacks for snack time at school, and gift wrapping and some stuff for herself.

After Christmas is also a good time to shop for winter clothes, which are sometimes given as gifts. Sweaters, jackets, flannel shirts, etc. are starting to be marked down. With Florida’s short period for winter-like weather, retailers have to unload the winter garb soon.

It is also a good time to get ready for New Year’s Eve and start checking out the Valentine items, which are already on display at many stores.

Eddie May Henderson’s daughter, Eugenia Moorehead, and Canadian snowbird John Cotie worked together at the Christmas dinner in Lake Placid.

Eddie May Henderson and Santa (Oscar Wagner), who arrived with bell in hand to Henderson’s Christmas dinner.

Leroy Sholtz takes a break in the kitchen and poses with son, Leonard. Eddie May Henderson raised Leroy and he has been helping her since the first dinner.

LAKE PLACID — More than 40 years ago, a young woman decided to host a community Christmas Dinner in Stuart Park in downtown Lake Placid. It was such a success, that two years later Placid Masonic Lodge No. 282 invited her to bring the event inside, out of the elements. Each year it grew larger.

Now, 81, that same woman, along with her family members, brought people of all races, colors, shapes and status together again. The only common thread was that most of the volunteers and diners were wearing some type of Christmas attire and a smile.

This year, the number of dinners served was over 800.

Eddie Mae Henderson is that woman. Her name around Lake Placid is highly recognizable. She doesn’t look for praise and believes God has chosen her to keep this tradition going.

Henderson spends much of the year planning for the Christmas Day Dinner. With the help of local businesses, donations, and volunteers, people are able to enjoy a hearty turkey and ham treat, with all the fixings.

Many of the dinners are delivered to shut-ins, families in distress, and workers who are away from their families for Christmas. Frank Hartzell, owner of Hartzell’s Meat Market, prepared the meat. Then, when it arrived at the Masonic Lodge, the volunteers took over, cutting and de-boning the turkeys. No one actually assigned those helpers with a job — somehow, they just knew what to do.

Sharply at 10 a.m., the doors opened and families started coming inside. Once gathered together, Henderson thanked those who helped. This year, Gene Page, of the Sebring Parkway Church of Christ, gave the invocation. Meanwhile, Oscar Wagner, alias Santa Claus, clanked his bell to announce to the children that they could begin selecting toys and have their photos taken with Santa.

In addition to the food, there were clothing and books available at no charge. Kids had their faces painted or got a fake tattoo on their arm. The laughter and emotions ran high.

Henderson didn’t sit down or even take a break. She supervised, dished out food, boxed up to-go dinners and visited with everyone. You could see on her face that she was happy. But she always gave the credit to others.

By 2 p.m., the building was cleaned up and silent again. Out there somewhere, 800 people ate a Christmas dinner because of Eddie Mae Henderson.

In this October 2019 file photo, Sun ‘N Lake General Manager Tanya Cannady asks the Highlands County Board of County Commission to make changes in the district’s code to make sure every appointee to a vacant board seat must serve out the term and must stand for and be elected in a general election if one occurs prior to the end of that term. Rather than make changes, commissioners deferred the question to the Florida Attorney General’s Office. Both County Attorney Joy Carmichael and Sun ‘N Lake contract attorney David Schumacher are still working on the issue.

From left: Sun ‘N Lake Supervisors Joe Branson, Neal Hotelling and Raymond Brooks talk with staff for the special improvement district during their most recent board meeting. They and Supervisor Mike Gilpin, not shown, are working with the district contract attorney, David Schumacher, to transition the board seats all to election by residents, with no landowner-chosen seats.

At their most recent meeting, David Schumacher, attorney contracted to represent the special improvement district, said he met with County Attorney Joy Carmichael this month and believes the district can transition completely to popularly-elected seats and add methods with minimum effort.

Schumacher cited an opinion made by his predecessor and colleague, attorney John McClure, at the meeting on Aug. 24, 2012, when the district went from having three landowner-chosen seats and two popularly-elected seats to two landowner seats and three popular seats.

That change also affected whether or not the district had to comply with Florida Statutes 189.4051, governing requirements and procedures of elections for districts with governing boards elected on a one-acre/one-vote basis.

By changing to one-dollar-equals-one-vote, said Schumacher, citing McClure, “that went out the window.”

“It is my opinion that our elections scheme is 100% controlled by the board of county commissioners (sic),” Schumacher said, reading McClure’s opinion into the record. “They have addressed the election scheme in the last modification to our charter.”

By being outside the scope of Florida Statute 189, Schumacher said, there is no reason why the board can’t transition fully to popularly-elected seats.

“We should be able to go to the county and say, ‘This is what we want,’” Schumacher said. “It’s part of our charter, but is a word-for-word copy from the 189 statute.”

That’s if Carmichael agrees and the County Commission votes for that change, asked Supervisor Raymond Brooks. Schumacher said yes, and also said yes to Brooks’ question of whether or not he still had to meet with Carmichael on the matter.

The matter has been in front of the County Commission in the last three months. On Oct. 2, District General Manager Tanya Cannady asked for changes in the district charter to require anyone appointed to fill a vacant seat to then stand for an election, if one occurs before the end of that term. If there is no general election prior to the end of that term, she said, then the term would expire and residents would choose someone in a special election. Either way, resident voters in the district would have a decision in who stays in the seat, she said.

County commissioners were reluctant to make that change when requested. Commissioner Ron Handley said state statutes usually require that an appointee serve out an entire term, whether a general election comes first or not.

In Spring Lake Improvement District, supervisors appoint a resident to fill a vacancy until the rest of the unexpired term. Sun ‘N Lake, however, has run into some questions regarding how a vacancy was handled last fall.

Mark Camp, elected in November to serve another four-year term, resigned without giving a reason, and the rest of the sitting supervisors, on Dec. 14, 2018, appointed Neal Hotelling to fill Camp’s seat. However, they also voted in January to reappoint him to the seat for the full four years, according to Cannady.

The district was created by county ordinance in 1974, and the county commission must be called on to make changes to its code.

The next general election is 2020, which gives some time to get a final answer. 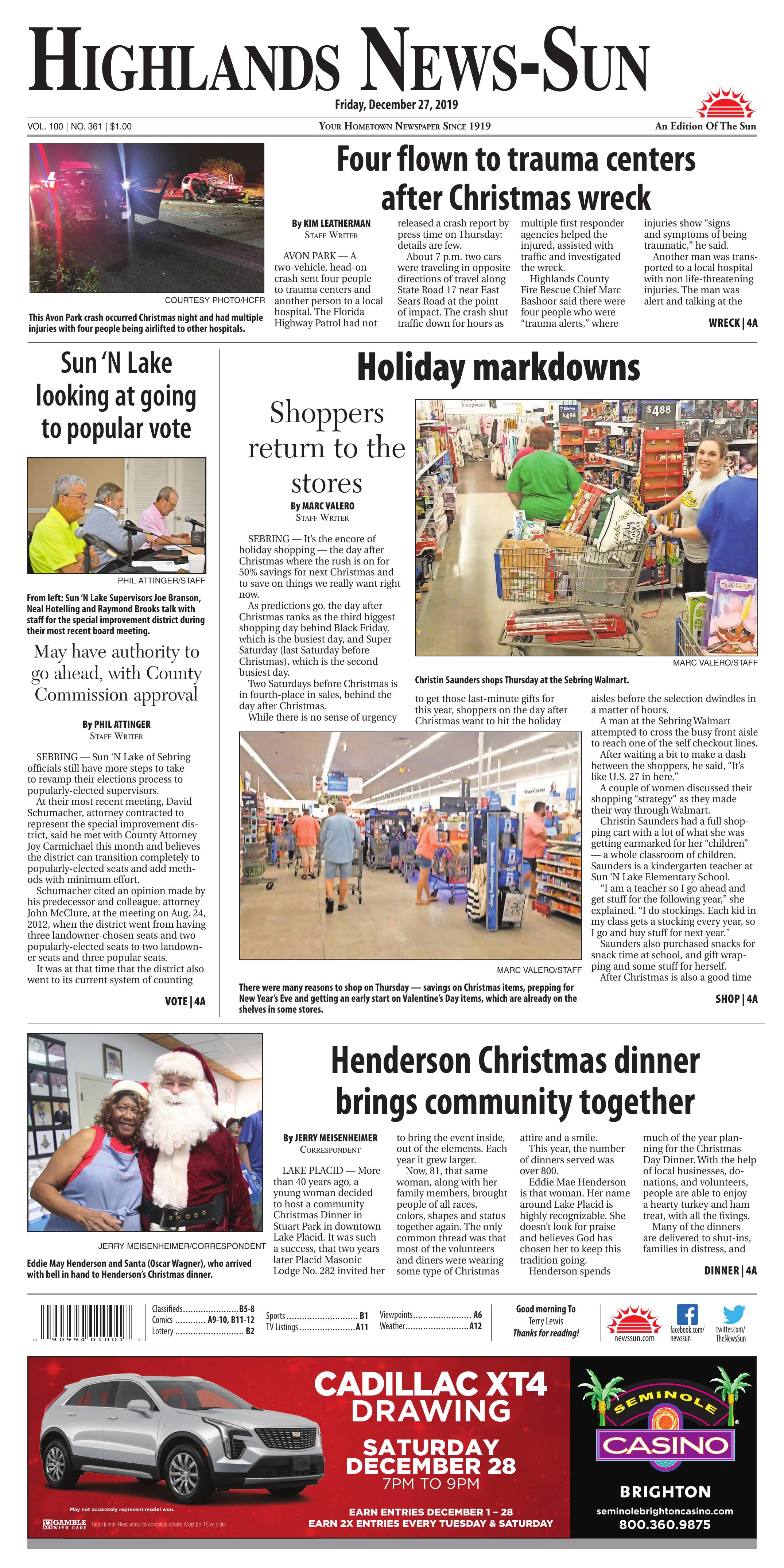