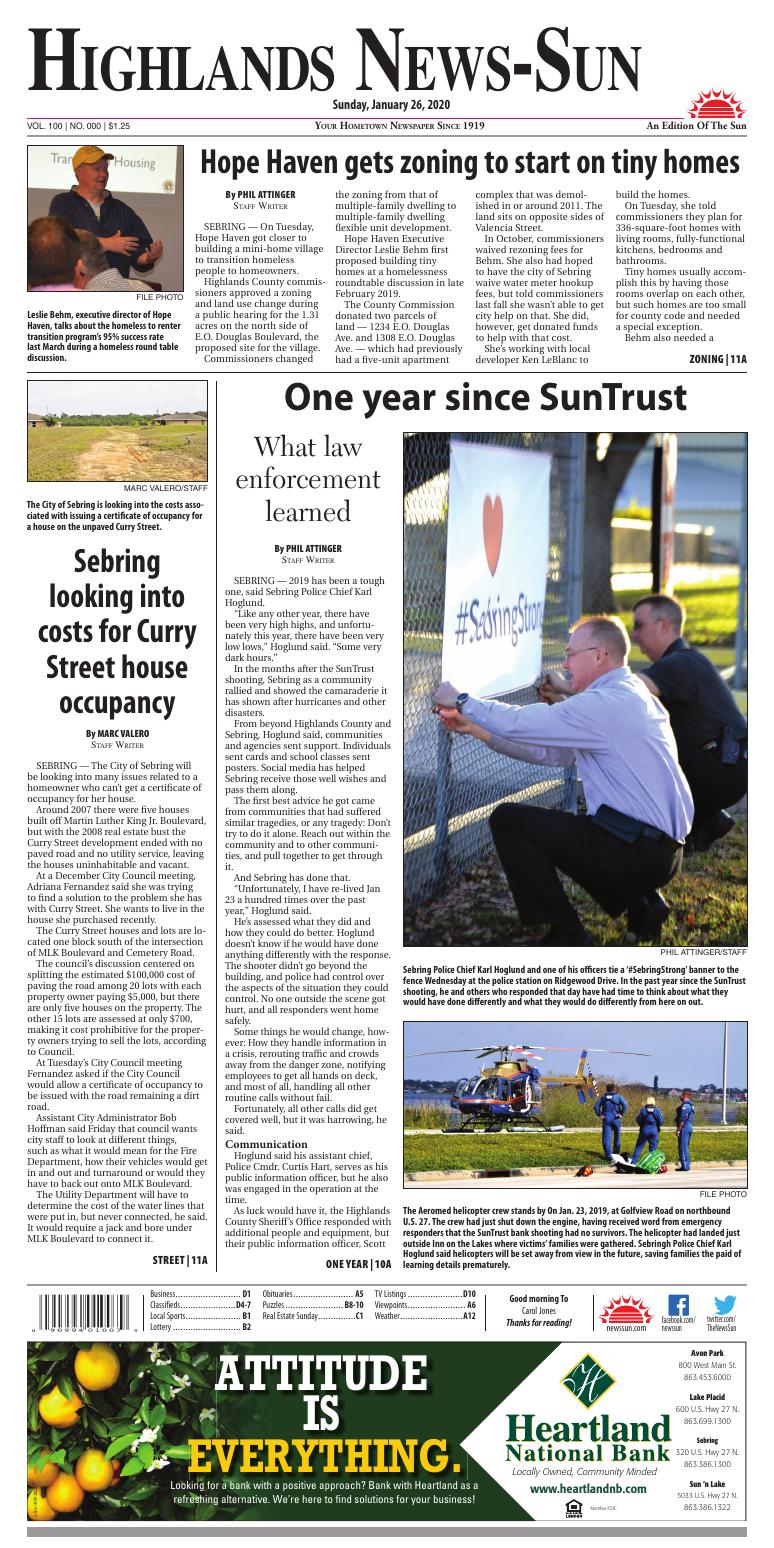 SEBRING — On Tuesday, Hope Haven got closer to building a mini-home village to transition homeless people to homeowners.

Highlands County commissioners approved a zoning and land use change during a public hearing for the 1.31 acres on the north side of E.O. Douglas Boulevard, the proposed site for the village.

The County Commission donated two parcels of land — 1234 E.O. Douglas Ave. and 1308 E.O. Douglas Ave. — which had previously had a five-unit apartment complex that was demolished in or around 2011. The land sits on opposite sides of Valencia Street.

In October, commissioners waived rezoning fees for Behm. She also had hoped to have the city of Sebring waive water meter hookup fees, but told commissioners last fall she wasn’t able to get city help on that. She did, however, get donated funds to help with that cost.

On Tuesday, she told commissioners they plan for 336-square-foot homes with living rooms, fully-functional kitchens, bedrooms and bathrooms.

Tiny homes usually accomplish this by having those rooms overlap on each other, but such homes are too small for county code and needed a special exception.

Behm also needed a flexible-unit development in case she and LeBlanc decide to go up on the home footprints a bit to make them more accommodating.

She will work with tenants as she does at Hope Haven Phase 1, a program she runs out of and in partnership with the owners of Safari Inn on U.S. 27. Behm rents to former homeless individuals who have employment and have organized their lives enough to keep up with their bills.

Behm hopes to have 30 homes in “Phase 2” for singles or couples without children, then build “Phase 3” with slightly larger homes for families.

Each one, she said, would be 386 square feet with a living room, fully functional kitchen, bedroom and bathroom.

She plans to have all homes in the park on one septic tank.

Sebring Police Chief Karl Hoglund and one of his officers tie a ‘#SebringStrong’ banner to the fence Wednesday at the police station on Ridgewood Drive. In the past year since the SunTrust shooting, he and others who responded that day have had time to think about what they would have done differently and what they would do differently from here on out.

The Aeromed helicopter crew stands by On Jan. 23, 2019, at Golfview Road on northbound U.S. 27. The crew had just shut down the engine, having received word from emergency responders that the SunTrust bank shooting had no survivors. The helicopter had landed just outside Inn on the Lakes where victims’ families were gathered. Sebringh Police Chief Karl Hoglund said helicopters will be set away from view in the future, saving families the paid of learning details prematurely.

Undersheriff Col. Mike Brown, at right, gestures to local reporters on Jan. 23, 2019, that they need to move further back, out of and away from the ‘hot zone’ surrounding the SunTrust shooting. That day, crowd and safety zone control was a concern, even from construction workers spectating from atop a nearby unfinished hotel.

SEBRING — 2019 has been a tough one, said Sebring Police Chief Karl Hoglund.

In the months after the SunTrust shooting, Sebring as a community rallied and showed the camaraderie it has shown after hurricanes and other disasters.

The first best advice he got came from communities that had suffered similar tragedies, or any tragedy: Don’t try to do it alone. Reach out within the community and to other communities, and pull together to get through it.

And Sebring has done that.

“Unfortunately, I have re-lived Jan 23 a hundred times over the past year,” Hoglund said.

He’s assessed what they did and how they could do better. Hoglund doesn’t know if he would have done anything differently with the response. The shooter didn’t go beyond the building, and police had control over the aspects of the situation they could control. No one outside the scene got hurt, and all responders went home safely.

Some things he would change, however: How they handle information in a crisis, rerouting traffic and crowds away from the danger zone, notifying employees to get all hands on deck, and most of all, handling all other routine calls without fail.

Fortunately, all other calls did get covered well, but it was harrowing, he said.

Hoglund said his assistant chief, Police Cmdr. Curtis Hart, serves as his public information officer, but he also was engaged in the operation at the time.

As luck would have it, the Highlands County Sheriff’s Office responded with additional people and equipment, but their public information officer, Scott Dressel, was at the Florida Association of Public Information Officers conference in Daytona. Once calls started coming in, he set up a remote information station with phones and his laptop in his hotel room.

Their backup PIO, Nell Hays, was at an unrelated conference in Orlando. She was immediately recalled, but Highlands County PIO Gloria Rybinski was on-scene at the SunTrust shooting to field calls.

“I couldn’t answer all the calls or texts immediately,” Rybinski said, “[while] talking on the phone or talking to onsite media.”

Dressel counted 150 phone calls, some from CNN, CBS, ABC, NBC and countless broadcast stations in Florida. He eventually started telling them they needed to go to Sebring if they wanted live information.

“Things change when the national media comes to town,” Dressel said. “[There are] so many questions coming to you at once.”

He got Sheriff’s Office officials on the scene to relay information as best they could.

Since then, Rybinski and Dressel have organized with outside PIOs for a regional backup system.

“I don’t ever want to use what I learned again,” Dressel said. “Now I can reach out to another agency. I can advise them on what to do.”

They can also call for help, if needed.

The incident was right on U.S. 27, the main thoroughfare for the county, and on an isthmus between two lakes, giving few avenues to reroute traffic and evacuate bystanders, not an easy task when the incident drew a varied crowd of bystanders, local media and emergency responders.

They had families gathered at nearby Inn on the Lakes, which Hoglund called a “huge accomplishment” for a small jurisdiction.

Unfortunately, he also had Aeromed helicopter’s landing zone right outside the hotel on northbound U.S. 27. Any evacuation of victims would have prompted families to walk out asking if it was their loved ones.

When the helicopter shut down, because no one had survived, it broadcast that fact to all who saw it, including families. Hoglund said, in future, he and other agencies will want to have landing zones at hospitals or other spots away from the families.

Detective Stephen Williams, called to the scene, told the Highlands News-Sun one of the most stressful situations he faced was when a witness from the bank was telling him who was inside, including his sister-in-law, and his phone rang: His brother asking about her.

He immediately had to pull himself off the case, as is protocol when family is involved, and gather with the families, out of radio contact with officers, so he would not know any sooner than his family about what had happened.

This first anniversary brought it all back to him again, and he didn’t relish Thursday’s memorial dedication, but he felt it was something he had to do.

“For me, the family support [we received] is the best,” Williams said.

Hoglund was thankful to have a corps of victims’ advocates from various agencies converge on the scene, giving the families the comfort and care they needed.

Word went out immediately, even without dispatchers’ radio pages, through all forms of communication about the incident, drawing off-duty law enforcement officers.

“Word gets out quickly in the law enforcement community,” Hoglund said.

Hoglund wants to see a countywide system and protocol for pulling people back on duty as needed, to make sure the incident has all the people it needs, and to make sure all of the daily incidents get covered.

Resources came in from other counties and from the state, including Governor Ron DeSantis and Attorney General Ashley Moody. Egos were left at the door, he said, which is as it should be.

Since the shooting, Hoglund has had his officers undergo additional training to deal with a future active threat incident, if one were to happen, as well as a policy for Critical Incident Stress Management to tend to all responders’ mental health.

On Thursday, at the memorial dedication, it was noted to Hoglund that although the shooter stopped and called 911 — confining hurt to just the five families — it would have been much better if he had called 911 before going through with it.

“We’ve got to make it OK for people to not be OK,” Hoglund said.

The City of Sebring is looking into the costs associated with issuing a certificate of occupancy for a house on the unpaved Curry Street.

SEBRING — The City of Sebring will be looking into many issues related to a homeowner who can’t get a certificate of occupancy for her house.

Around 2007 there were five houses built off Martin Luther King Jr. Boulevard, but with the 2008 real estate bust the Curry Street development ended with no paved road and no utility service, leaving the houses uninhabitable and vacant.

At a December City Council meeting, Adriana Fernandez said she was trying to find a solution to the problem she has with Curry Street. She wants to live in the house she purchased recently.

The Curry Street houses and lots are located one block south of the intersection of MLK Boulevard and Cemetery Road.

The council’s discussion centered on splitting the estimated $100,000 cost of paving the road among 20 lots with each property owner paying $5,000, but there are only five houses on the property. The other 15 lots are assessed at only $700, making it cost prohibitive for the property owners trying to sell the lots, according to Council.

At Tuesday’s City Council meeting Fernandez asked if the City Council would allow a certificate of occupancy to be issued with the road remaining a dirt road.

Assistant City Administrator Bob Hoffman said Friday that council wants city staff to look at different things, such as what it would mean for the Fire Department, how their vehicles would get in and out and turnaround or would they have to back out onto MLK Boulevard.

The Utility Department will have to determine the cost of the water lines that were put in, but never connected, he said. It would require a jack and bore under MLK Boulevard to connect it.

Also, council asked for the cost of a concrete apron from MLK Boulevard onto Curry Street so vehicles would not damage the edge of the boulevard, Hoffman said.

A building official would have to list anything else that would be required before a certificate of occupancy is issued; for instance, the houses are not on the central sewer system so are the septic tanks in place.

“So we have a whole list of things we are looking at right now,” Hoffman said.

Since the Tuesday meeting, Fernandez emailed the city asking if it could sell her the road right of way, Hoffman said. The answer would be “No.

“The city can vacate the road right of way, but we cannot sell it.”

Theoretically if the road is vacated and the property owner doesn’t grant an easement for another person to travel the road, then it blocks them from going down the road, he explained. To vacate it one would have to get an agreement and easement from everybody, but all the property owners probably don’t want to do that, he said. 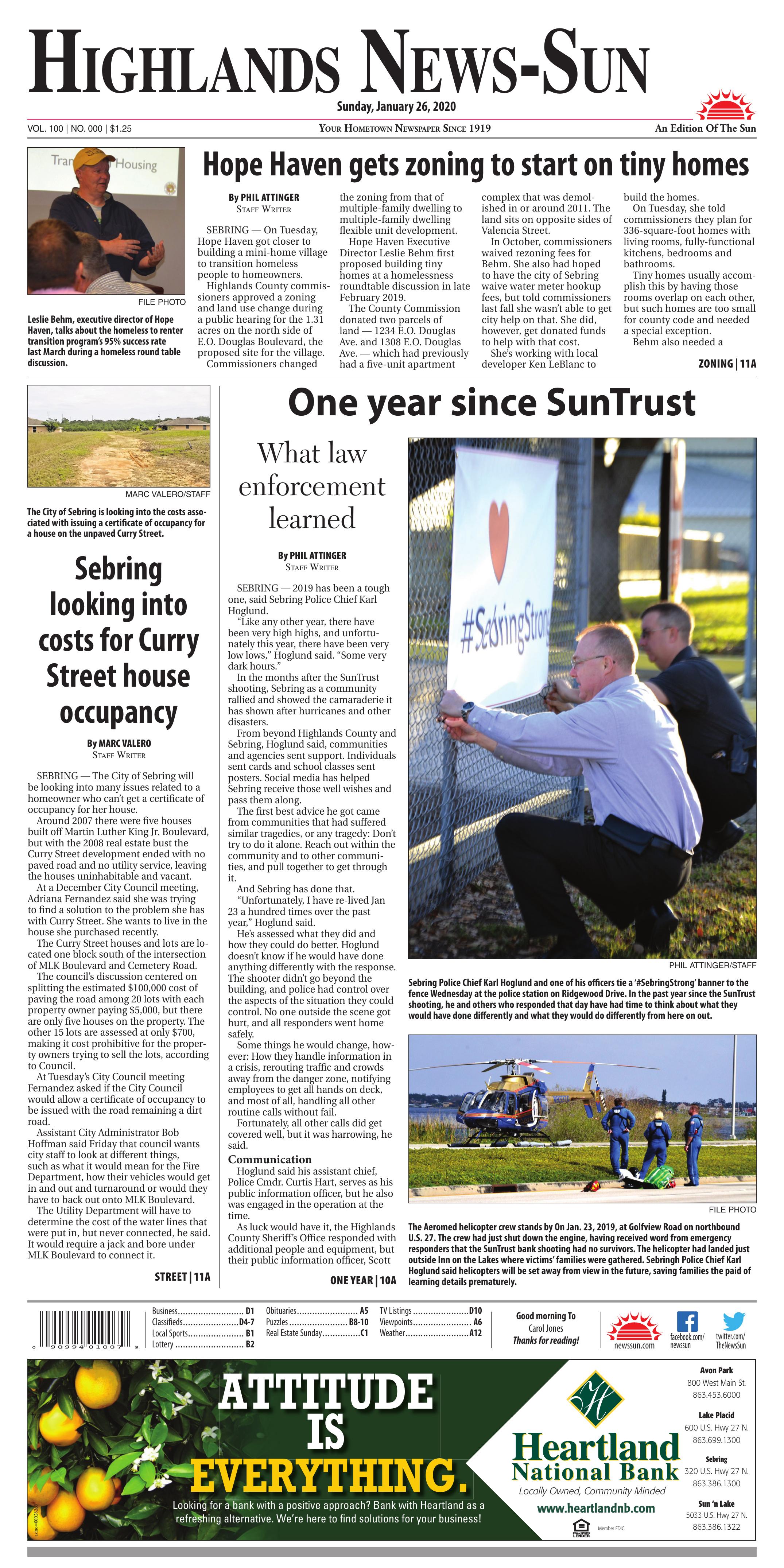