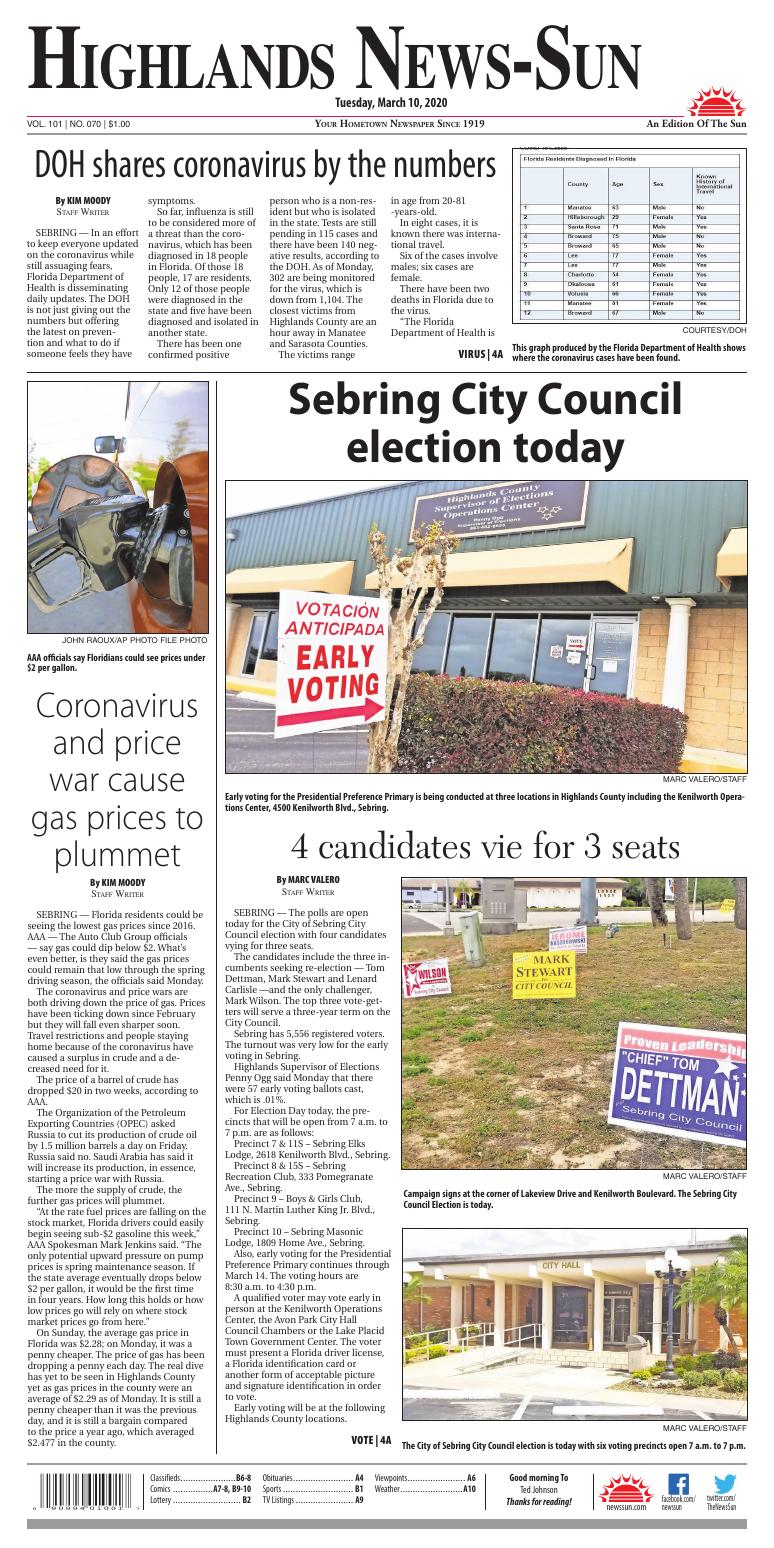 This graph produced by the Florida Department of Health shows where the coronavirus cases have been found.

SEBRING — In an effort to keep everyone updated on the coronavirus while still assuaging fears, Florida Department of Health is disseminating daily updates. The DOH is not just giving out the numbers but offering the latest on prevention and what to do if someone feels they have symptoms.

So far, influenza is still to be considered more of a threat than the coronavirus, which has been diagnosed in 18 people in Florida. Of those 18 people, 17 are residents. Only 12 of those people were diagnosed in the state and five have been diagnosed and isolated in another state.

There has been one confirmed positive person who is a non-resident but who is isolated in the state. Tests are still pending in 115 cases and there have been 140 negative results, according to the DOH. As of Monday, 302 are being monitored for the virus, which is down from 1,104. The closest victims from Highlands County are an hour away in Manatee and Sarasota Counties.

In eight cases, it is known there was international travel.

Six of the cases involve males; six cases are female.

There have been two deaths in Florida due to the virus.

“The Florida Department of Health is advising all individuals who have traveled internationally to self-isolate for 14 days following their date of return to the United States,” said in an email.

The DOH said the virus presents with a fever, cough and shortness of breath. If you are symptomatic, the DOH says to call the local DOH office and make arrangements with them to receive medical attention.

There is currently no vaccine for the coronavirus and there is not one on the horizon. Prevention is the best option. The biggest thing, the health officials are saying, is to wash hands for at least 20 seconds with soap. Hand sanitizers are also helpful, if you can find some.

- Staying home when you are sick and avoiding contact with persons in poor health;

- Avoiding touching your eyes, nose and mouth with unwashed hands; and

- Covering your cough or sneeze with a tissue, then disposing of the tissue.”

In addition, the Centers for Disease Control and Prevention has added a section to their website on travel advisories.

Early voting for the Presidential Preference Primary is being conducted at three locations in Highlands County including the Kenilworth Operations Center, 4500 Kenilworth Blvd., Sebring.

Campaign signs at the corner of Lakeview Drive and Kenilworth Boulevard. The Sebring City Council Election is today.

SEBRING — The polls are open today for the City of Sebring City Council election with four candidates vying for three seats.

The candidates include the three incumbents seeking re-election — Tom Dettman, Mark Stewart and Lenard Carlisle —and the only challenger, Mark Wilson. The top three vote-getters will serve a three-year term on the City Council.

Sebring has 5,556 registered voters. The turnout was very low for the early voting in Sebring.

Highlands Supervisor of Elections Penny Ogg said Monday that there were 57 early voting ballots cast, which is .01%.

For Election Day today, the precincts that will be open from 7 a.m. to 7 p.m. are as follows:

Also, early voting for the Presidential Preference Primary continues through March 14. The voting hours are 8:30 a.m. to 4:30 p.m.

A qualified voter may vote early in person at the Kenilworth Operations Center, the Avon Park City Hall Council Chambers or the Lake Placid Town Government Center. The voter must present a Florida driver license, a Florida identification card or another form of acceptable picture and signature identification in order to vote.

Early voting will be at the following Highlands County locations.

Early voting will not be conducted on Monday, the day before the election.

The Supervisor of Elections Office advises this is your chance to get it done early and avoid possible lines at the polling places, especially at the larger precincts such as precincts 4, 5, 13, 15, 16, 17, 19 and 25.

It doesn’t matter where you live, you may go to any of the three early voting sites and cast your vote there.

A graph that shows the gas pricing changes throughout the year.

AAA officials say Floridians could see prices under $2 per gallon.

SEBRING — Florida residents could be seeing the lowest gas prices since 2016. AAA — The Auto Club Group officials — say gas could dip below $2. What’s even better, is they said the gas prices could remain that low through the spring driving season, the officials said Monday.

The coronavirus and price wars are both driving down the price of gas. Prices have been ticking down since February but they will fall even sharper soon. Travel restrictions and people staying home because of the coronavirus have caused a surplus in crude and a decreased need for it.

The price of a barrel of crude has dropped $20 in two weeks, according to AAA.

The Organization of the Petroleum Exporting Countries (OPEC) asked Russia to cut its production of crude oil by 1.5 million barrels a day on Friday. Russia said no. Saudi Arabia has said it will increase its production, in essence, starting a price war with Russia.

The more the supply of crude, the further gas prices will plummet.

“At the rate fuel prices are falling on the stock market, Florida drivers could easily begin seeing sub-$2 gasoline this week,” AAA Spokesman Mark Jenkins said. “The only potential upward pressure on pump prices is spring maintenance season. If the state average eventually drops below $2 per gallon, it would be the first time in four years. How long this holds or how low prices go will rely on where stock market prices go from here.”

On Sunday, the average gas price in Florida was $2.28; on Monday, it was a penny cheaper. The price of gas has been dropping a penny each day. The real dive has yet to be seen in Highlands County yet as gas prices in the county were an average of $2.29 as of Monday. It is still a penny cheaper than it was the previous day, and it is still a bargain compared to the price a year ago, which averaged $2.477 in the county. 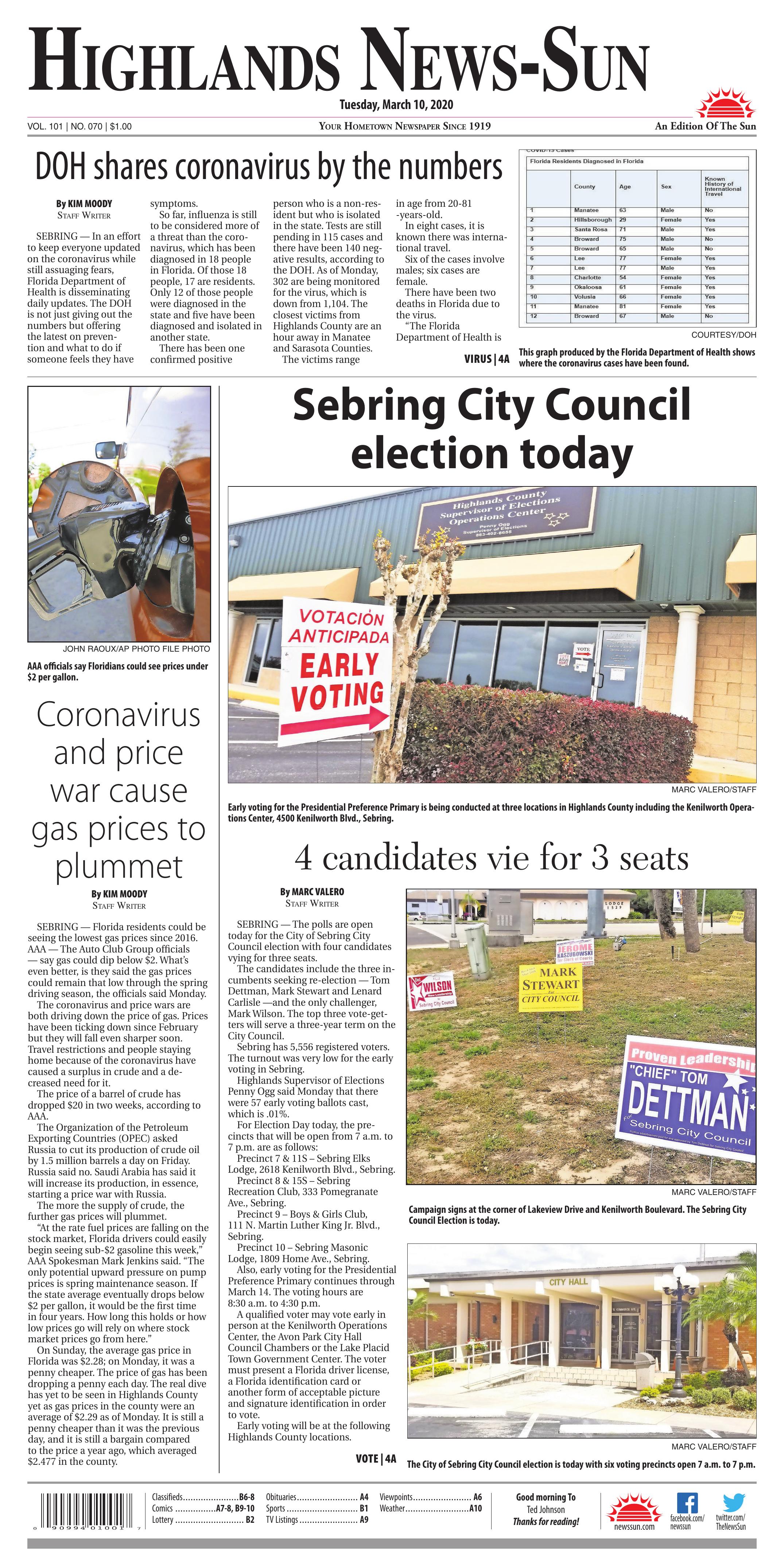