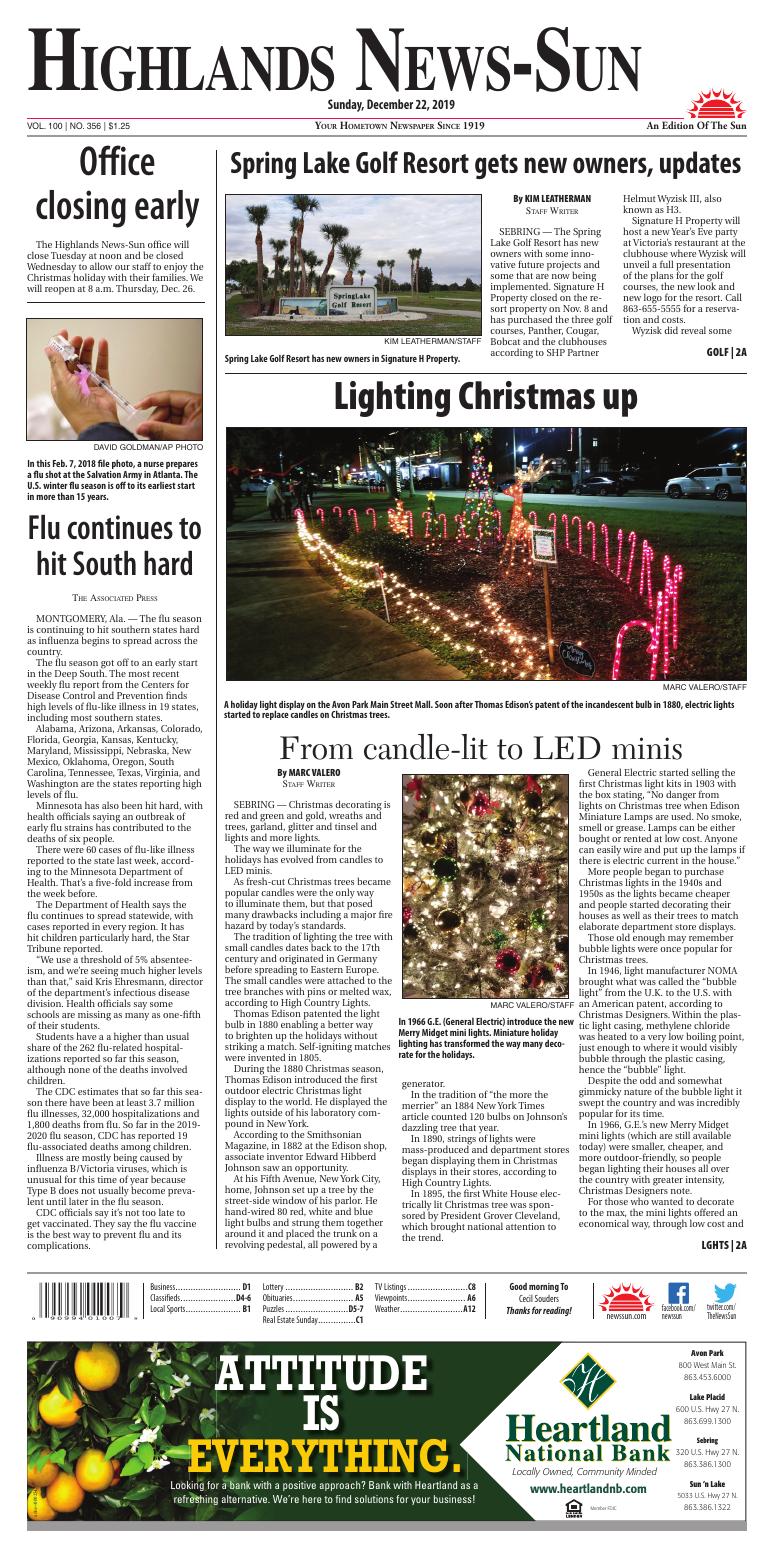 SEBRING — The Spring Lake Golf Resort has new owners with some innovative future projects and some that are now being implemented. Signature H Property closed on the resort property on Nov. 8 and has purchased the three golf courses, Panther, Cougar, Bobcat and the clubhouses according to SHP Partner Helmut Wyzisk III, also known as H3.

Signature H Property will host a new Year’s Eve party at Victoria’s restaurant at the clubhouse where Wyzisk will unveil a full presentation of the plans for the golf courses, the new look and new logo for the resort. Call 863-655-5555 for a reservation and costs.

Wyzisk did reveal some of the changes that are on the horizon and some renovations and improvements currently taking place.

“We made an agreement with the previous owners to allow us bring in a new management team,” Wyzisk said.

Signature H Property brought in XUDE Hospitality for the golf course to make some changes. Wyzisk said having a management team on the property before closing on the property ensured the former owners of their commitment and eased transitions.

The new owners wanted to get the golf courses in good shape before the start of golf season the beginning of November. The greens, tees and fairways have been over-seeded and the sand traps have all new sand. After consulting with an outside maintenance group, the mowing patterns were changed.

New signage can be seen along the courses.

“A 12-hole short course will be added close to the clubhouse,” Wyzisk said. “We have already started the prep work there. We have killed all the grass and will begin after the new year.”

Eventually, the courses will be rebuilt. Greens will be moved and re-planned.

“We want people to have a new golf experience,” he said. “We will keep 18 holes open at all times during that time.”

The clubhouse and restaurant, currently Victoria’s, will undergo some major changes as well. The current staff has been added to and they are being trained to provide a “culture of customer service centric.”

Wyzisk said that, being a resort, the staff should know the client’s names and what they would like to drink and more.

The restaurant will be open earlier and stay open later. A new menu and more will be revealed after the New Year’s Day.

A holiday light display on the Avon Park Main Street Mall. Soon after Thomas Edison’s patent of the incandescent bulb in 1880, electric lights started to replace candles on Christmas trees.

In 1966 G.E. (General Electric) introduce the new Merry Midget mini lights. Miniature holiday lighting has transformed the way many decorate for the holidays.

From non-mini bulbs to incandescent mini-bulbs to LED minis (center) and more there has been an interesting evolution in the way we light things up for the holidays.

The recommendations for lighting a Christmas tree range from 100 to 200 lights per vertical foot. An associate of Thomas Edison was the first person to light a Christmas tree with electric lights in 1882.

SEBRING — Christmas decorating is red and green and gold, wreaths and trees, garland, glitter and tinsel and lights and more lights.

The way we illuminate for the holidays has evolved from candles to LED minis.

As fresh-cut Christmas trees became popular candles were the only way to illuminate them, but that posed many drawbacks including a major fire hazard by today’s standards.

The tradition of lighting the tree with small candles dates back to the 17th century and originated in Germany before spreading to Eastern Europe. The small candles were attached to the tree branches with pins or melted wax, according to High Country Lights.

Thomas Edison patented the light bulb in 1880 enabling a better way to brighten up the holidays without striking a match. Self-igniting matches were invented in 1805.

During the 1880 Christmas season, Thomas Edison introduced the first outdoor electric Christmas light display to the world. He displayed the lights outside of his laboratory compound in New York.

According to the Smithsonian Magazine, in 1882 at the Edison shop, associate inventor Edward Hibberd Johnson saw an opportunity.

At his Fifth Avenue, New York City, home, Johnson set up a tree by the street-side window of his parlor. He hand-wired 80 red, white and blue light bulbs and strung them together around it and placed the trunk on a revolving pedestal, all powered by a generator.

In the tradition of “the more the merrier” an 1884 New York Times article counted 120 bulbs on Johnson’s dazzling tree that year.

In 1890, strings of lights were mass-produced and department stores began displaying them in Christmas displays in their stores, according to High Country Lights.

In 1895, the first White House electrically lit Christmas tree was sponsored by President Grover Cleveland, which brought national attention to the trend.

General Electric started selling the first Christmas light kits in 1903 with the box stating, “No danger from lights on Christmas tree when Edison Miniature Lamps are used. No smoke, smell or grease. Lamps can be either bought or rented at low cost. Anyone can easily wire and put up the lamps if there is electric current in the house.”

More people began to purchase Christmas lights in the 1940s and 1950s as the lights became cheaper and people started decorating their houses as well as their trees to match elaborate department store displays.

Those old enough may remember bubble lights were once popular for Christmas trees.

In 1946, light manufacturer NOMA brought what was called the “bubble light” from the U.K. to the U.S. with an American patent, according to Christmas Designers. Within the plastic light casing, methylene chloride was heated to a very low boiling point, just enough to where it would visibly bubble through the plastic casing, hence the “bubble” light.

Despite the odd and somewhat gimmicky nature of the bubble light it swept the country and was incredibly popular for its time.

In 1966, G.E.’s new Merry Midget mini lights (which are still available today) were smaller, cheaper, and more outdoor-friendly, so people began lighting their houses all over the country with greater intensity, Christmas Designers note.

For those who wanted to decorate to the max, the mini lights offered an economical way, through low cost and low wattage, to brighten up the season.

The next holiday lighting game-changer came in 1998 with the LED Christmas light. LED (light-emitting diode) cost a little more, but lasts longer and are more efficient than the mini light, which means you can string them longer.

A box of a recently purchased string of 100-light mini-lights states that five sets of lights can be safely connected, which would total 500 lights.

A box of a recently purchased string of 50-light LED mini-lights states that 45 sets of lights can be safely connected, which would total 2,250 lights. Most decorators would likely run out of holiday cheer and funding well before setting up 45 strings of lights.

The LED light uses 95% less energy and lasts up to 100,000 hours and LED lights don’t have the same frustrating problem as older Christmas light sets when one light goes it causes the whole strand to go out.

Holiday lighting which was once for the rich and those whose houses had electric current, now is an inexpensive, energy efficient and easy way to brighten up the season.

The Highlands News-Sun office will close Tuesday at noon and be closed Wednesday to allow our staff to enjoy the Christmas holiday with their families. We will reopen at 8 a.m. Thursday, Dec. 26.

In this Feb. 7, 2018 file photo, a nurse prepares a flu shot at the Salvation Army in Atlanta. The U.S. winter flu season is off to its earliest start in more than 15 years.

MONTGOMERY, Ala. — The flu season is continuing to hit southern states hard as influenza begins to spread across the country.

The flu season got off to an early start in the Deep South. The most recent weekly flu report from the Centers for Disease Control and Prevention finds high levels of flu-like illness in 19 states, including most southern states.

Minnesota has also been hit hard, with health officials saying an outbreak of early flu strains has contributed to the deaths of six people.

There were 60 cases of flu-like illness reported to the state last week, according to the Minnesota Department of Health. That’s a five-fold increase from the week before.

The Department of Health says the flu continues to spread statewide, with cases reported in every region. It has hit children particularly hard, the Star Tribune reported.

“We use a threshold of 5% absenteeism, and we’re seeing much higher levels than that,” said Kris Ehresmann, director of the department’s infectious disease division. Health officials say some schools are missing as many as one-fifth of their students.

Students have a a higher than usual share of the 262 flu-related hospitalizations reported so far this season, although none of the deaths involved children.

The CDC estimates that so far this season there have been at least 3.7 million flu illnesses, 32,000 hospitalizations and 1,800 deaths from flu. So far in the 2019-2020 flu season, CDC has reported 19 flu-associated deaths among children.

Illness are mostly being caused by influenza B/Victoria viruses, which is unusual for this time of year because Type B does not usually become prevalent until later in the flu season.

CDC officials say it’s not too late to get vaccinated. They say the flu vaccine is the best way to prevent flu and its complications. 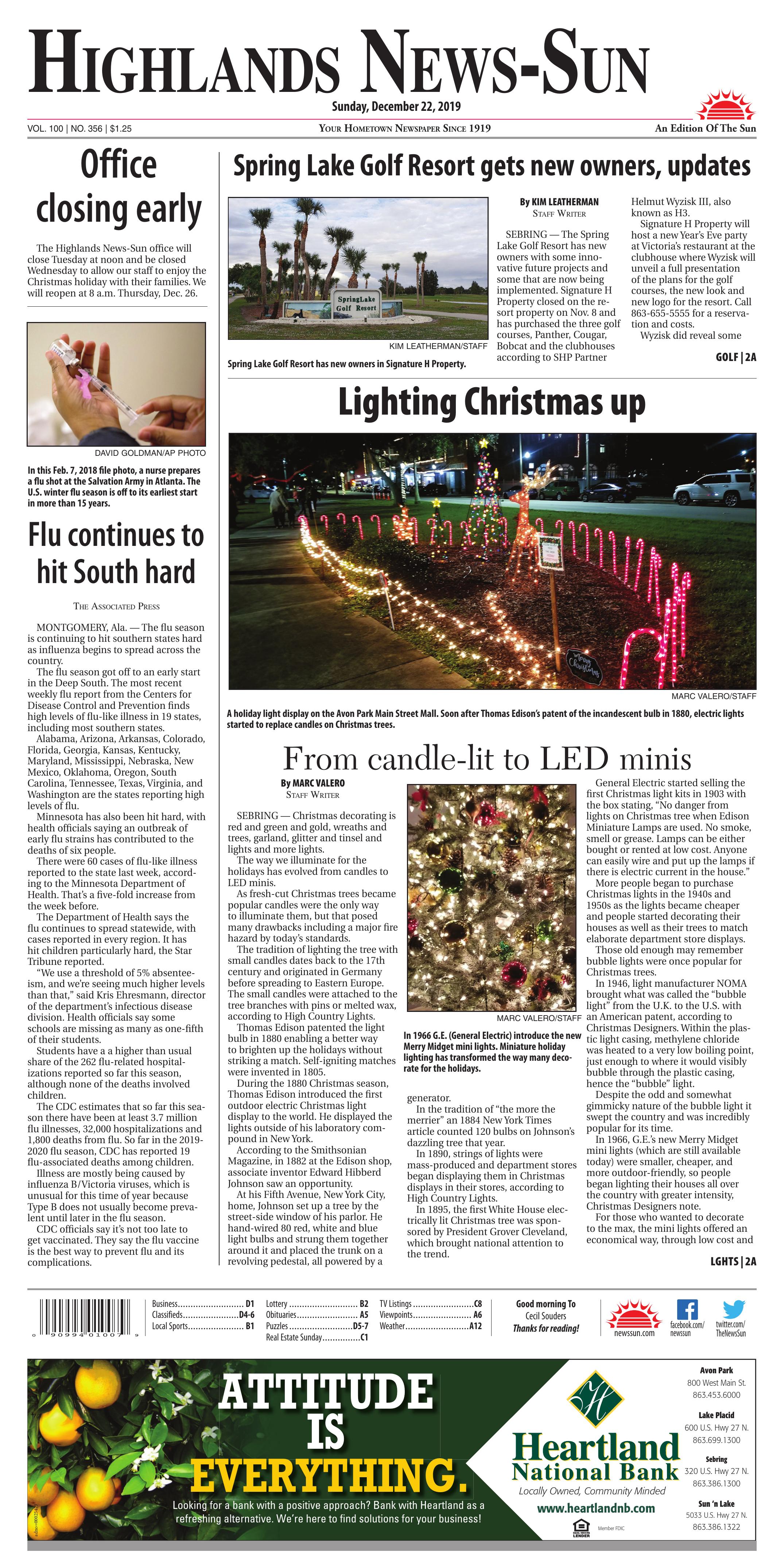