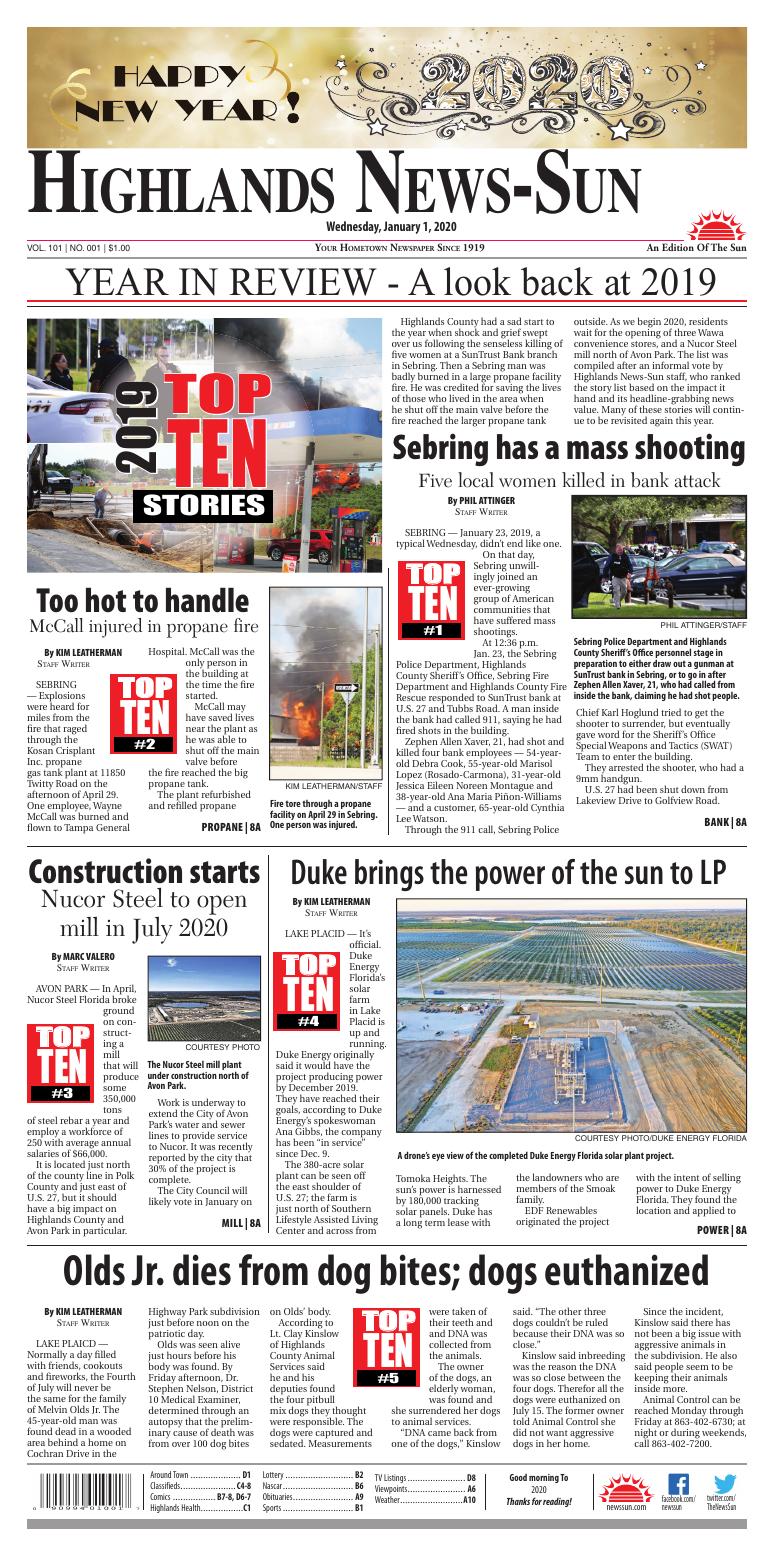 LAKE PLACID — It’s official. Duke Energy Florida’s solar farm in Lake Placid is up and running. Duke Energy originally said it would have the project producing power by December 2019. They have reached their goals, according to Duke Energy’s spokeswoman Ana Gibbs, the company has been “in service” since Dec. 9.

The 380-acre solar plant can be seen off the east shoulder of U.S. 27; the farm is just north of Southern Lifestyle Assisted Living Center and across from Tomoka Heights. The sun’s power is harnessed by 180,000 tracking solar panels. Duke has a long term lease with the landowners who are members of the Smoak family.

EDF Renewables originated the project with the intent of selling power to Duke Energy Florida. They found the location and applied to the county for a special exception for the solar farm. A short time later, Duke Energy Florida took over the entire project and saw it through to completion. Construction started in May of this year.

Gibbs explained how the cost of building the plant will be recouped.

“The total cost for the Lake Placid project is approximately $60.6 million,” she said. “That translates to an estimated 22 cents per 1,000 kilowatt-hours (kWh) for residential customers’ monthly bill.”

Duke Energy Florida and its construction partner, Overland Contracting, have been involved in the community. They held a back-to-school drive and raised money with their employees to fund the Tomoka Heights scholarships for Lake Placid High School seniors. Their employees also reside, shop and eat at local establishments.

LAKE PLAICD — Normally a day filled with friends, cookouts and fireworks, the Fourth of July will never be the same for the family of Melvin Olds Jr. The 45-year-old man was found dead in a wooded area behind a home on Cochran Drive in the Highway Park subdivision just before noon on the patriotic day.

Olds was seen alive just hours before his body was found. By Friday afternoon, Dr. Stephen Nelson, District 10 Medical Examiner, determined through an autopsy that the preliminary cause of death was from over 100 dog bites on Olds’ body.

According to Lt. Clay Kinslow of Highlands County Animal Services said he and his deputies found the four pitbull mix dogs they thought were responsible. The dogs were captured and sedated. Measurements were taken of their teeth and and DNA was collected from the animals.

The owner of the dogs, an elderly woman, was found and she surrendered her dogs to animal services.

“DNA came back from one of the dogs,” Kinslow said. “The other three dogs couldn’t be ruled because their DNA was so close.”

Kinslow said inbreeding was the reason the DNA was so close between the four dogs. Therefor all the dogs were euthanized on July 15. The former owner told Animal Control she did not want aggressive dogs in her home.

Since the incident, Kinslow said there has not been a big issue with aggressive animals in the subdivision. He also said people seem to be keeping their animals inside more.

Fire tore through a propane facility on April 29 in Sebring. One person was injured.

A fire at a propane facility in Sebring forced evacuations up to a mile radius last April.

SEBRING — Explosions were heard for miles from the fire that raged through the Kosan Crisplant Inc. propane gas tank plant at 11850 Twitty Road on the afternoon of April 29. One employee, Wayne McCall was burned and flown to Tampa General Hospital. McCall was the only person in the building at the time the fire started.

McCall may have saved lives near the plant as he was able to shut off the main valve before the fire reached the big propane tank.

The plant refurbished and refilled propane tanks similar to the 20-pound tanks used for grilling. The site also had a 50,000-pound tank on the premises. When the fire started, the propane tanks could be heard hissing like loud snakes and the explosions sent the tanks shooting into the sky, becoming missiles. Some of the catapulted tanks landed in the woods across the street and caught the brush on fire.

The Highlands County Fire Rescue units had no choice to close U.S. 27 near the blaze and evacuate up to a mile around the facility. The Bert J. Harris Jr. Agricultural Center was opened for those who had to evacuate.

HCFR declared the fire so dangerous, especially with the large tank there, they would have to let the structure burn until it was safe enough to access. The Sunset Park mobile home park across the street from the plant, had many homes destroyed by the fire as tanks were hurled into the homes.

The State Fire Marshal has closed the case.

“The fire at Kosan Crisplant was ruled accidental and it was determined to be caused by a gas leak and static electricity,” said Communications Director Katie Strickland, with the State Fire Marshal’s office, in an email on Friday. “There was one employee who received extensive injuries and was airlifted to Tampa General Hospital. This employee did survive their injuries. There was an estimated loss of about $4,000,000.”

AVON PARK — In April, Nucor Steel Florida broke ground on constructing a mill that will produce some 350,000 tons of steel rebar a year and employ a workforce of 250 with average annual salaries of $66,000.

It is located just north of the county line in Polk County and just east of U.S. 27, but it should have a big impact on Highlands County and Avon Park in particular.

Work is underway to extend the City of Avon Park’s water and sewer lines to provide service to Nucor. It was recently reported by the city that 30% of the project is complete.

The City Council will likely vote in January on an agreement with Nucor for city water and sewer services.

The approximately seven-mile line runs north from the Avon Park substation along the CSX Corporation vacant rail line to County Road 17A and west for one mile, then along the west side of U.S. 27 North for approximately two miles to Nucor’s plant.

According to Duke Energy, there may be lulls between construction activities. Construction is expected to be completed by March 2020.

The steel rebar mill is slated to open in July 2020.

Nucor is number 151 in the Fortune 500 list of America’s Largest Companies with more than $20 billion in revenue in 2018.

Highlands County had a sad start to the year when shock and grief swept over us following the senseless killing of five women at a SunTrust Bank branch in Sebring. Then a Sebring man was badly burned in a large propane facility fire. He was credited for saving the lives of those who lived in the area when he shut off the main valve before the fire reached the larger propane tank outside. As we begin 2020, residents wait for the opening of three Wawa convenience stores, and a Nucor Steel mill north of Avon Park. The list was compiled after an informal vote by Highlands News-Sun staff, who ranked the story list based on the impact it hand and its headline-grabbing news value. Many of these stories will continue to be revisited again this year.

Sebring Police Department and Highlands County Sheriff’s Office personnel stage in preparation to either draw out a gunman at SunTrust bank in Sebring, or to go in after Zephen Allen Xaver, 21, who had called from inside the bank, claiming he had shot people. Worst fears were confirmed when officers breached the building, arrested the shooter, and found five local women shot and killed.

From left: Sebring Police Sgt. Vivian Buck, Cpl. Sean Bueford and Cmdr. Curtis Hart stage on Jan. 23, 2019, at Sebring Fire Department Station 15 on U.S. 27 alongside local press to await the latest word on a shooter at SunTrust bank, just a mile south of them. Word did come, that a shooter who entered the bank with a gun, had shot and killed five women there before calling local law enforcement himself.

On that day, Sebring unwillingly joined an ever-growing group of American communities that have suffered mass shootings.

At 12:36 p.m. Jan. 23, the Sebring Police Department, Highlands County Sheriff’s Office, Sebring Fire Department and Highlands County Fire Rescue responded to SunTrust bank at U.S. 27 and Tubbs Road. A man inside the bank had called 911, saying he had fired shots in the building.

Through the 911 call, Sebring Police Chief Karl Hoglund tried to get the shooter to surrender, but eventually gave word for the Sheriff’s Office Special Weapons and Tactics (SWAT) Team to enter the building.

They arrested the shooter, who had a 9mm handgun.

U.S. 27 had been shut down from Lakeview Drive to Golfview Road. Aeromed helicopter, on U.S. 27 at Golfview Road, powered down. At a 4:30 p.m. press conference with Gov. Ron DeSantis, Hoglund and Sheriff Paul Blackman confirmed the worst.

“It’s a horrible day for Sebring, Highlands County and the state of Florida,” DeSantis said, pledging support from the people of Florida and his assistance with the investigation.

A candlelight vigil was held that Sunday night at the former Highlands News-Sun Center on Magnolia Avenue.

This year, for pretrial conferences, the shooter has waived his right to appear, and is being examined for competency to stand trial.

Discovery in the case, released in July, confirmed what Haas said after the indictment: That the shooter bought his weapon legally at a local gun shop, not a gun show, just prior to the incident.

The Highlands News-Sun learned the shooter grew up in Bremen, Indiana. Once in 2012-2013, after an afternoon nap, he allegedly reported having a dream about “killing other students in a classroom.” He was admitted, twice, to the Eric Foster Counseling Services Behavioral Health Center in Plymouth.

Later, on March 7, 2017, a young woman told Michigan State Police Sgt. Matt Casseman that the defendant had said in messages he was “possibly thinking about suicide by cop and taking hostages.”

State police investigated and notified his mother, who promised to speak to him, but declined their assistance.

His mother was to leave on a business trip the day he walked into the SunTrust branch.

SunTrust bank demolished the building in May with plans to work with local leaders on how best to use the site to honor those lost.

Throughout the year, local residents have left candles, religious mementos and personal effects at 1901 U.S. 27 S. as a makeshift shrine to the five women killed there.

Recently, the SunTrust Foundation has began work on a memorial replete with symbolism for the numbers 1, 2 and 3 for Jan. 23 and 12:30 p.m., the date and time the shooting occurred, and on the number five, for the five women. 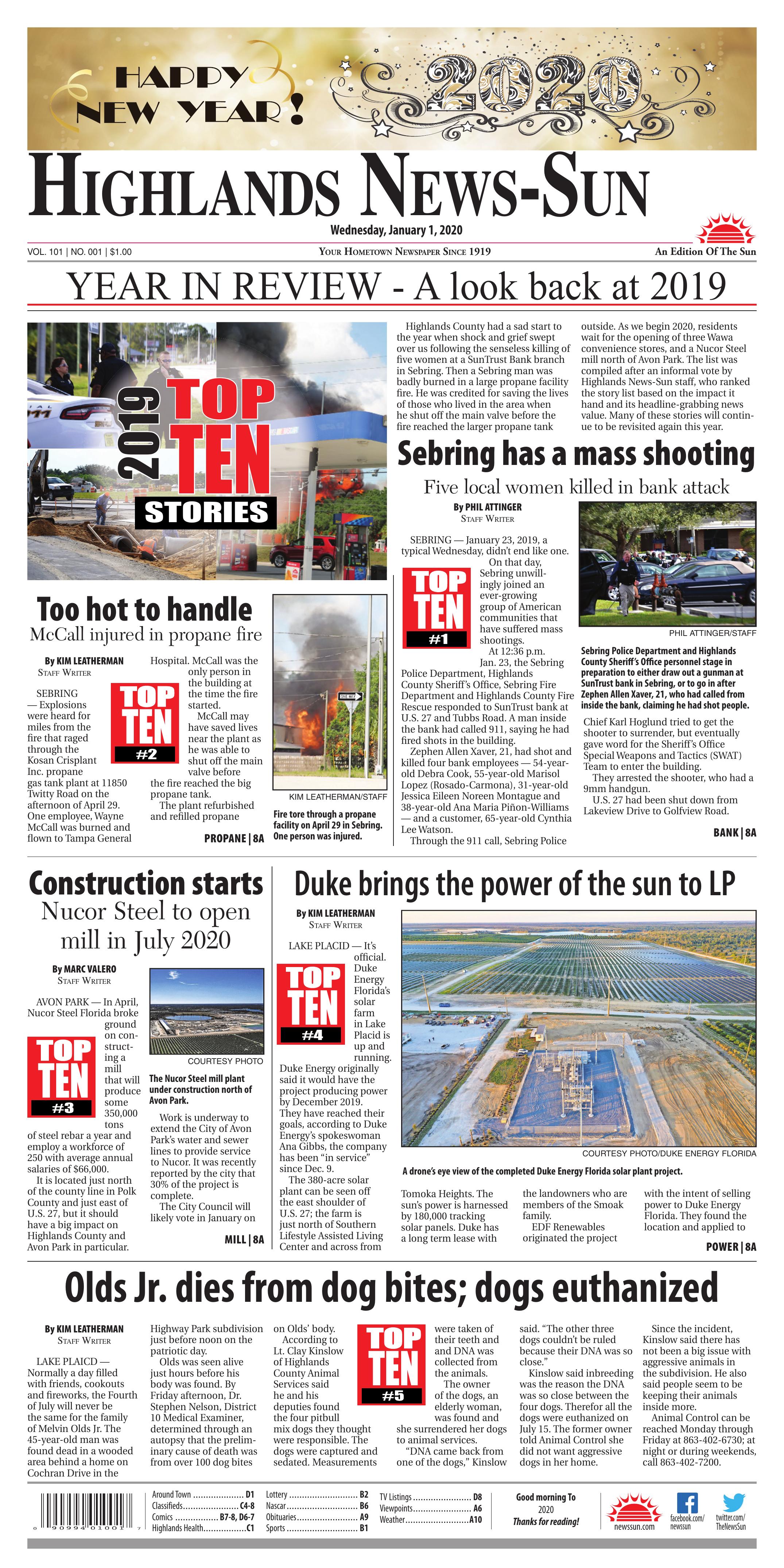