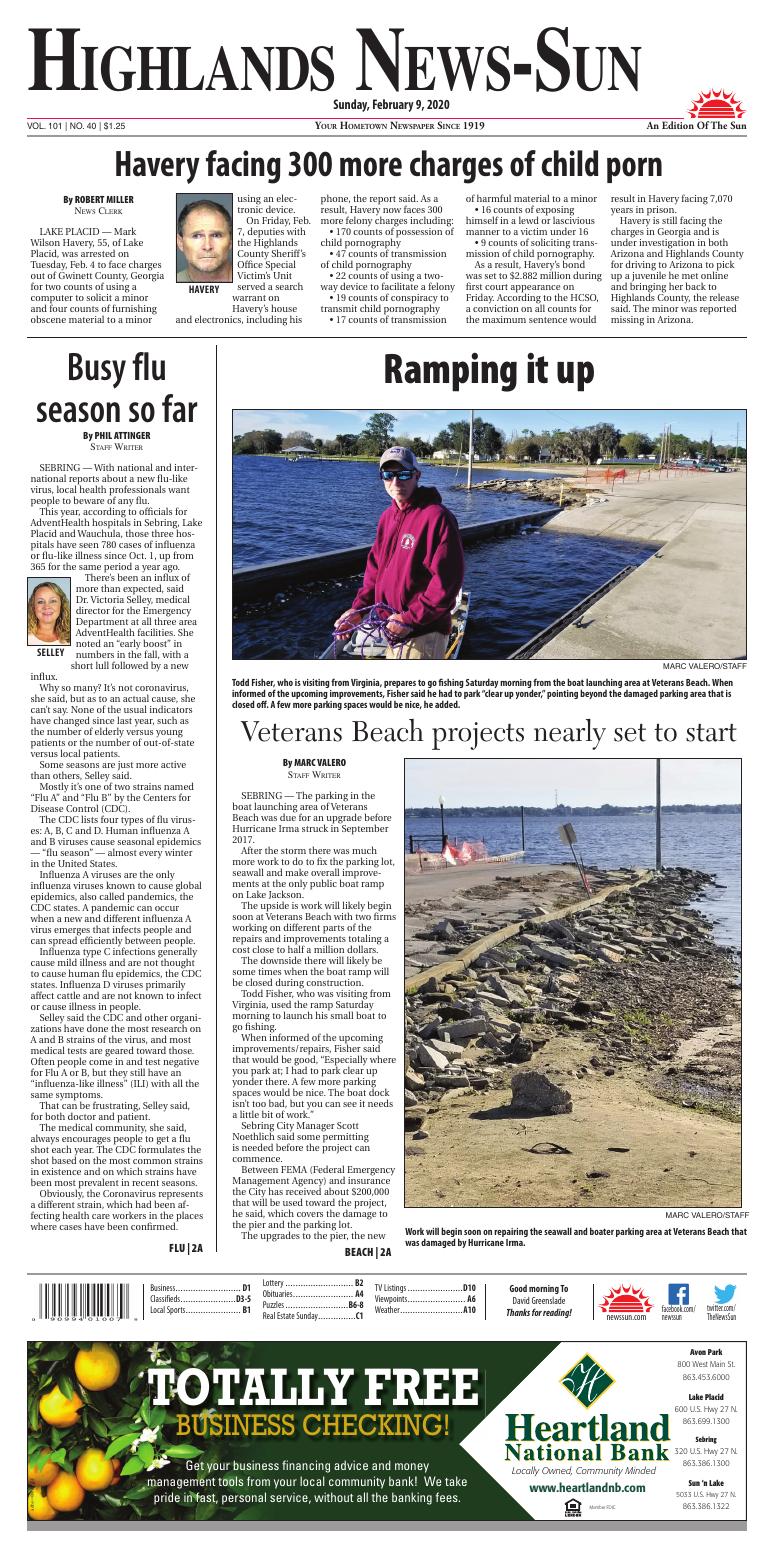 LAKE PLACID — Mark Wilson Havery, 55, of Lake Placid, was arrested on Tuesday, Feb. 4 to face charges out of Gwinett County, Georgia for two counts of using a computer to solicit a minor and four counts of furnishing obscene material to a minor using an electronic device.

On Friday, Feb. 7, deputies with the Highlands County Sheriff’s Office Special Victim’s Unit served a search warrant on Havery’s house and electronics, including his phone, the report said. As a result, Havery now faces 300 more felony charges including:

• 170 counts of possession of child pornography

• 47 counts of transmission of child pornography

• 17 counts of transmission of harmful material to a minor

As a result, Havery’s bond was set to $2.882 million during first court appearance on Friday. According to the HCSO, a conviction on all counts for the maximum sentence would result in Havery facing 7,070 years in prison.

Havery is still facing the charges in Georgia and is under investigation in both Arizona and Highlands County for driving to Arizona to pick up a juvenile he met online and bringing her back to Highlands County, the release said. The minor was reported missing in Arizona.

Todd Fisher, who is visiting from Virginia, prepares to go fishing Saturday morning from the boat launching area at Veterans Beach. When informed of the upcoming improvements, Fisher said he had to park “clear up yonder,” pointing beyond the damaged parking area that is closed off. A few more parking spaces would be nice, he added.

Work will begin soon on repairing the seawall and boater parking area at Veterans Beach that was damaged by Hurricane Irma.

Upcoming improvements to the Veterans Beach boat ramp area includes a floating dock that will be added at the end of the pier between the boat ramps.

SEBRING — The parking in the boat launching area of Veterans Beach was due for an upgrade before Hurricane Irma struck in September 2017.

After the storm there was much more work to do to fix the parking lot, seawall and make overall improvements at the only public boat ramp on Lake Jackson.

The upside is work will likely begin soon at Veterans Beach with two firms working on different parts of the repairs and improvements totaling a cost close to half a million dollars.

The downside there will likely be some times when the boat ramp will be closed during construction.

Todd Fisher, who was visiting from Virginia, used the ramp Saturday morning to launch his small boat to go fishing.

When informed of the upcoming improvements/repairs, Fisher said that would be good, “Especially where you park at; I had to park clear up yonder there. A few more parking spaces would be nice. The boat dock isn’t too bad, but you can see it needs a little bit of work.”

Sebring City Manager Scott Noethlich said some permitting is needed before the project can commence.

Between FEMA (Federal Emergency Management Agency) and insurance the City has received about $200,000 that will be used toward the project, he said, which covers the damage to the pier and the parking lot.

When asked, Noethlich confirmed there is no other public boat ramp on Lake Jackson.

The City Council approved the bid from Loren Jock Trucking, Inc. of $326,550 as the lowest responsive and responsible bidder for the construction of a new seawall, replacement of the current pier and building the attached floating boat dock.

The pier is the middle portion of each boat ramp, Noethlich said. The floating dock would extend from the pier so when people launch and load their boats they would have a dock they can tie up to while they are doing that process. 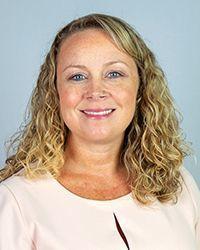 SEBRING — With national and international reports about a new flu-like virus, local health professionals want people to beware of any flu.

This year, according to officials for AdventHealth hospitals in Sebring, Lake Placid and Wauchula, those three hospitals have seen 780 cases of influenza or flu-like illness since Oct. 1, up from 365 for the same period a year ago.

There’s been an influx of more than expected, said Dr. Victoria Selley, medical director for the Emergency Department at all three area AdventHealth facilities. She noted an “early boost” in numbers in the fall, with a short lull followed by a new influx.

Why so many? It’s not coronavirus, she said, but as to an actual cause, she can’t say. None of the usual indicators have changed since last year, such as the number of elderly versus young patients or the number of out-of-state versus local patients.

Some seasons are just more active than others, Selley said.

Mostly it’s one of two strains named “Flu A” and “Flu B” by the Centers for Disease Control (CDC).

The CDC lists four types of flu viruses: A, B, C and D. Human influenza A and B viruses cause seasonal epidemics — “flu season” — almost every winter in the United States.

Influenza A viruses are the only influenza viruses known to cause global epidemics, also called pandemics, the CDC states. A pandemic can occur when a new and different influenza A virus emerges that infects people and can spread efficiently between people.

Influenza type C infections generally cause mild illness and are not thought to cause human flu epidemics, the CDC states. Influenza D viruses primarily affect cattle and are not known to infect or cause illness in people.

Selley said the CDC and other organizations have done the most research on A and B strains of the virus, and most medical tests are geared toward those. Often people come in and test negative for Flu A or B, but they still have an “influenza-like illness” (ILI) with all the same symptoms.

That can be frustrating, Selley said, for both doctor and patient.

The medical community, she said, always encourages people to get a flu shot each year. The CDC formulates the shot based on the most common strains in existence and on which strains have been most prevalent in recent seasons.

Obviously, the Coronavirus represents a different strain, which had been affecting health care workers in the places where cases have been confirmed.

To protect themselves, health care workers are wearing masks and using hand sanitizers. At AdventHealth emergency departments, they are also asking people who feel sick to get a free nose and mouth mask from the reception desk, to prevent spreading any disease to others.

In truth, Selley said, basic flu virus strains have killed and regularly do kill far more people than Coronavirus has at this point.

As with any flu season, the advice being given to people with flu symptoms, other than seeing a doctor for a diagnosis and possible prescriptions, Selley said, is to stay home from work or school until they have been fever-free for 24 hours and not coughing or sneezing.

Also, Selley said any families with multi-generational members, such as grandparents, parents and children all under the same roof, it’s very important to protect against getting everyone sick.

“If anyone is sick, put them in their own room. Keep them away from anyone else,” Selley said.

This is extremely important for anyone over age 65, under age 2 or any woman who is pregnant. 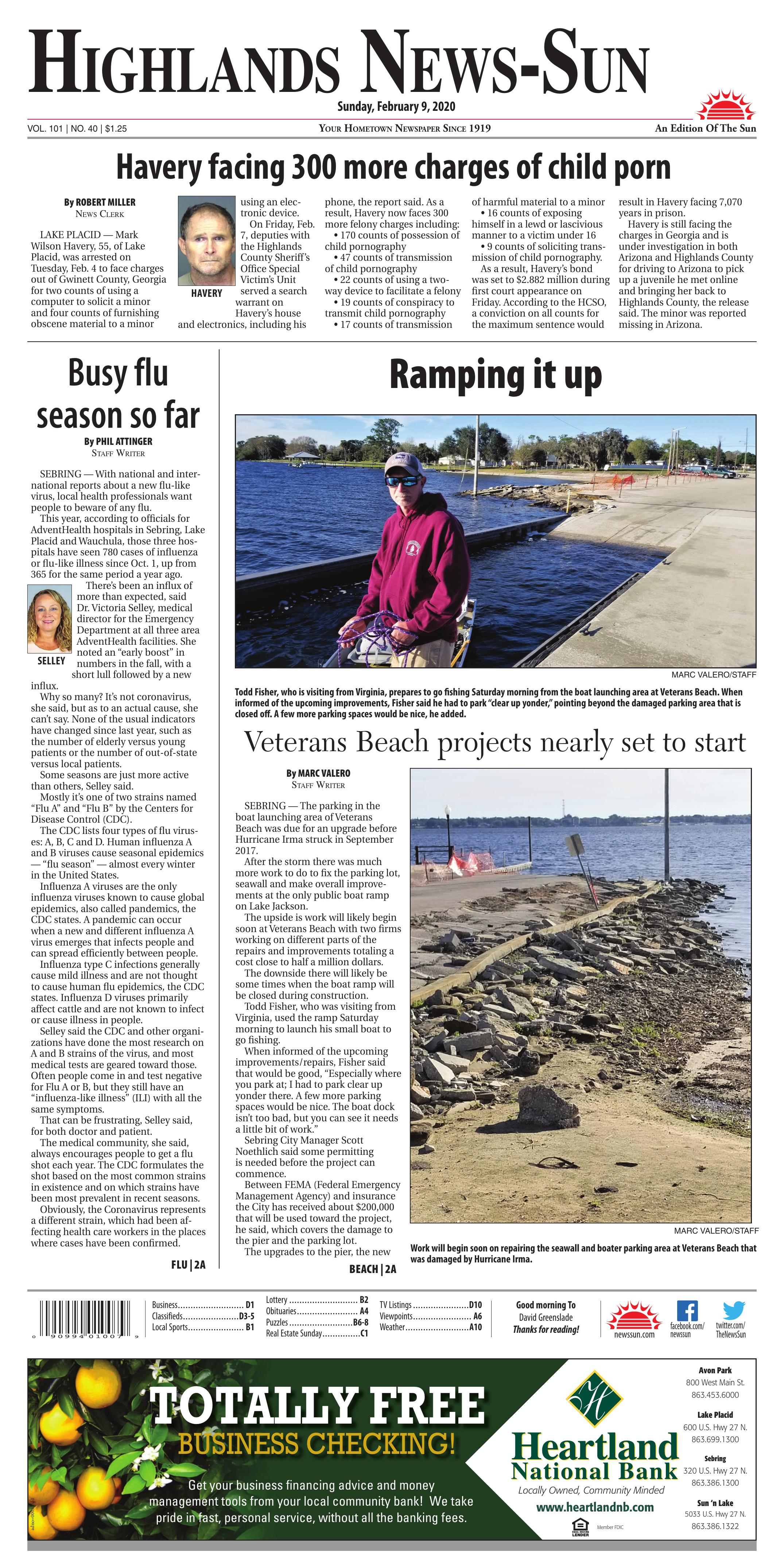