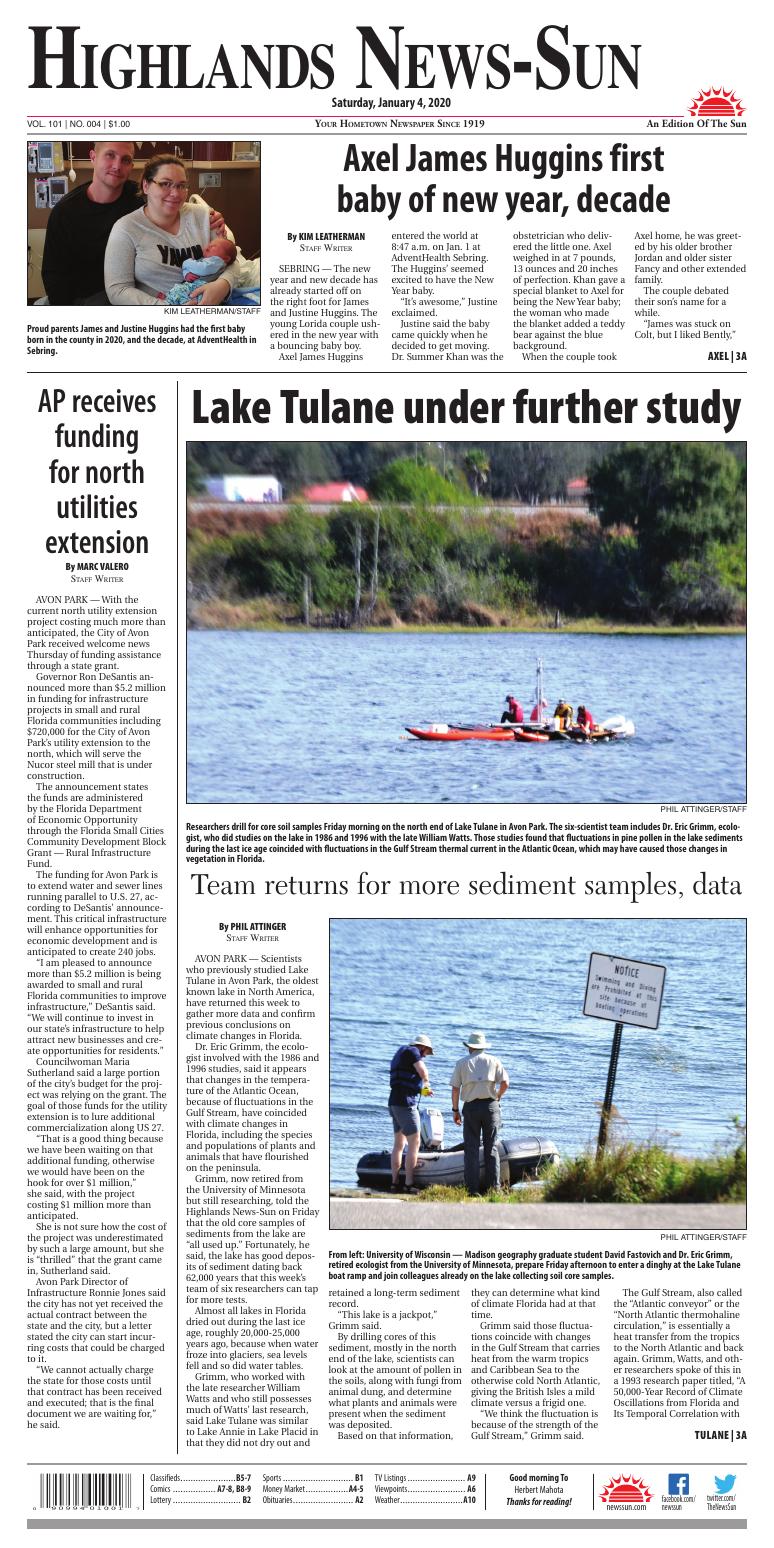 Proud parents James and Justine Huggins had the first baby born in the county in 2020, and the decade, at AdventHealth in Sebring.

Being the first baby of the new year and new decade, Axel James Huggins does not have a care in the world.

SEBRING — The new year and new decade has already started off on the right foot for James and Justine Huggins. The young Lorida couple ushered in the new year with a bouncing baby boy.

Axel James Huggins entered the world at 8:47 a.m. on Jan. 1 at AdventHealth Sebring. The Huggins’ seemed excited to have the New Year baby.

Justine said the baby came quickly when he decided to get moving. Dr. Summer Khan was the obstetrician who delivered the little one. Axel weighed in at 7 pounds, 13 ounces and 20 inches of perfection. Khan gave a special blanket to Axel for being the New Year baby; the woman who made the blanket added a teddy bear against the blue background.

When the couple took Axel home, he was greeted by his older brother Jordan and older sister Fancy and other extended family.

The couple debated their son’s name for a while.

“James was stuck on Colt, but I liked Bently,” Justine said. “He got to name Fancy. I asked a friend for some name suggestions and she came up with Axel. We liked it but didn’t tell anyone. When I went into labor everyone still thought we were going to go with Bently. They were shocked.”

Huggins will have maternity leave before returning to work at Sun Fuels in Tampa and James will soon return back to work at Kolor Trax in Mulberry.

Researchers drill for core soil samples Friday morning on the north end of Lake Tulane in Avon Park. The six-scientist team includes Dr. Eric Grimm, ecologist, who did studies on the lake in 1986 and 1996 with the late William Watts. Those studies found that fluctuations in pine pollen in the lake sediments during the last ice age coincided with fluctuations in the Gulf Stream thermal current in the Atlantic Ocean, which may have caused those changes in vegetation in Florida.

From left: University of Wisconsin — Madison geography graduate student David Fastovich and Dr. Eric Grimm, retired ecologist from the University of Minnesota, are two of a team of six scientists on Lake Tulane this week to gather more soil samples and study them. Grimm hopes to have them confirm conclusions from studies he did in 1986 and 1996, that changes in vegetation in Florida during the last ice age coincided with and may have been caused by changes in the strength of the offshore Gulf Stream current.

Dr. Eric Grimm, the ecologist involved with the 1986 and 1996 studies, said it appears that changes in the temperature of the Atlantic Ocean, because of fluctuations in the Gulf Stream, have coincided with climate changes in Florida, including the species and populations of plants and animals that have flourished on the peninsula.

Grimm, now retired from the University of Minnesota but still researching, told the Highlands News-Sun on Friday that the old core samples of sediments from the lake are “all used up.” Fortunately, he said, the lake has good deposits of sediment dating back 62,000 years that this week’s team of six researchers can tap for more tests.

Almost all lakes in Florida dried out during the last ice age, roughly 20,000-25,000 years ago, because when water froze into glaciers, sea levels fell and so did water tables.

Grimm, who worked with the late researcher William Watts and who still possesses much of Watts’ last research, said Lake Tulane was similar to Lake Annie in Lake Placid in that they did not dry out and retained a long-term sediment record.

“This lake is a jackpot,” Grimm said.

By drilling cores of this sediment, mostly in the north end of the lake, scientists can look at the amount of pollen in the soils, along with fungi from animal dung, and determine what plants and animals were present when the sediment was deposited.

Based on that information, they can determine what kind of climate Florida had at that time.

Grimm said those fluctuations coincide with changes in the Gulf Stream that carries heat from the warm tropics and Caribbean Sea to the otherwise cold North Atlantic, giving the British Isles a mild climate versus a frigid one.

“We think the fluctuation is because of the strength of the Gulf Stream,” Grimm said.

The Gulf Stream, also called the “Atlantic conveyor” or the “North Atlantic thermohaline circulation,” is essentially a heat transfer from the tropics to the North Atlantic and back again. Grimm, Watts, and other researchers spoke of this in a 1993 research paper titled, “A 50,000-Year Record of Climate Oscillations from Florida and Its Temporal Correlation with the Heinrich Events.”

Heat moves north in a thermal current over the top of the ocean toward polar regions, where it dispels its last heat, drops much of the water’s salinity, and sinks toward the sea floor.

The National Aeronautics and Space Administration at pmm.nasa.gov states that warm, salty water stays near the surface while colder, less salty water sits at the depths.

When water sinks, it flows south again toward the tropics where the northern flow of water at the surface draws up cold water from the depths to be warmed and sent north again.

When the current moves quickly, it’s warm in the United Kingdom and cooler in Florida, Grimm said. When it’s hot in Florida, it’s cooler in the U.K., he said.

The paper states that researchers have previously found shifts in the concentration of pine pollen deposits on the bottom of Lake Tulane during a 50,000-year period, indicating major vegetation shifts during the last glacial cycle.

The periods of high pine pollen concentration coincided with North Atlantic Heinrich events, massive periodic advances of “ice streams” — regions of an ice sheet that move significantly faster than the surrounding ice — from the eastern margin of the Laurentide Ice Sheet.

The earlier studies suggest that hemispherical cooling periods, effects of Mississippi drainage basin meltwater on the sea-surface temperatures of the Gulf of Mexico and changes in the North Atlantic thermohaline circulation have coincided with pine pollen spikes.

Fastovich said most sediment is fine particles, but sometimes it contains large stones, which indicates when a strong storm came through the area.

That study suggests that the core samples from the Atlantic indicate that even when conditions were not ideal for hurricanes in the tropical Atlantic, the data suggest the strong hurricanes may have regularly affected Florida, despite abrupt transitions in the sea-surface temperature and the speed of the Gulf Stream circulation.

By pulling more core samples at Lake Tulane, researchers hope to gather enough new data to shed more light on the climate forces at work at those times.

What’s the hardest part of the work? Keeping the boat tied together and steady for the drilling, Grimm said. Fastovich said it takes at least four anchors, in four directions, to hold the boats still.

Friday’s breezy weather made for comfortable temperatures, but a lot of choppy water, they said.

AVON PARK — With the current north utility extension project costing much more than anticipated, the City of Avon Park received welcome news Thursday of funding assistance through a state grant.

Governor Ron DeSantis announced more than $5.2 million in funding for infrastructure projects in small and rural Florida communities including $720,000 for the City of Avon Park’s utility extension to the north, which will serve the Nucor steel mill that is under construction.

The announcement states the funds are administered by the Florida Department of Economic Opportunity through the Florida Small Cities Community Development Block Grant — Rural Infrastructure Fund.

The funding for Avon Park is to extend water and sewer lines running parallel to U.S. 27, according to DeSantis’ announcement. This critical infrastructure will enhance opportunities for economic development and is anticipated to create 240 jobs.

“I am pleased to announce more than $5.2 million is being awarded to small and rural Florida communities to improve infrastructure,” DeSantis said. “We will continue to invest in our state’s infrastructure to help attract new businesses and create opportunities for residents.”

Councilwoman Maria Sutherland said a large portion of the city’s budget for the project was relying on the grant. The goal of those funds for the utility extension is to lure additional commercialization along US 27.

“That is a good thing because we have been waiting on that additional funding, otherwise we would have been on the hook for over $1 million,” she said, with the project costing $1 million more than anticipated.

She is not sure how the cost of the project was underestimated by such a large amount, but she is “thrilled” that the grant came in, Sutherland said.

Avon Park Director of Infrastructure Ronnie Jones said the city has not yet received the actual contract between the state and the city, but a letter stated the city can start incurring costs that could be charged to it.

“We cannot actually charge the state for those costs until that contract has been received and executed; that is the final document we are waiting for,” he said. 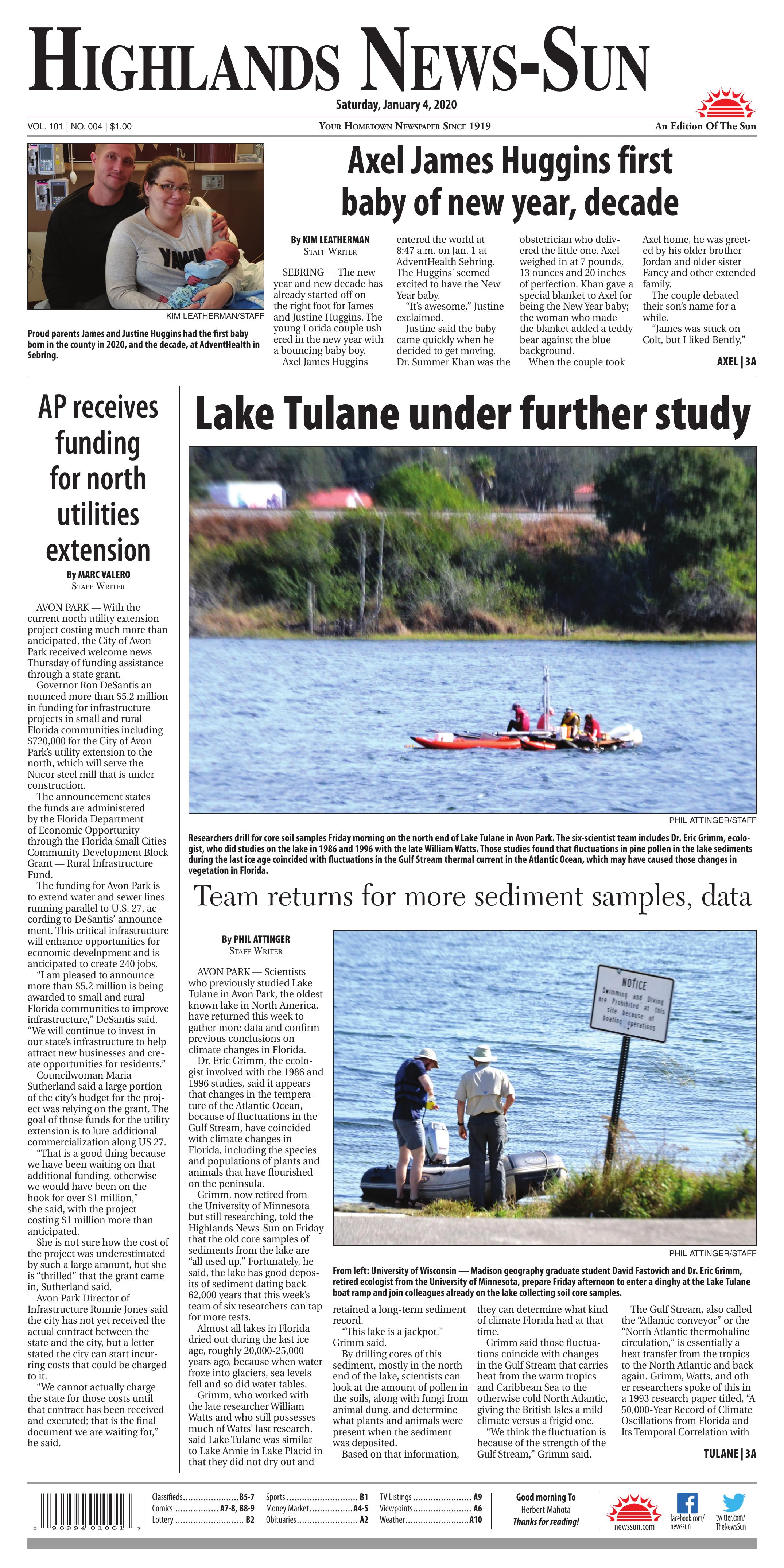