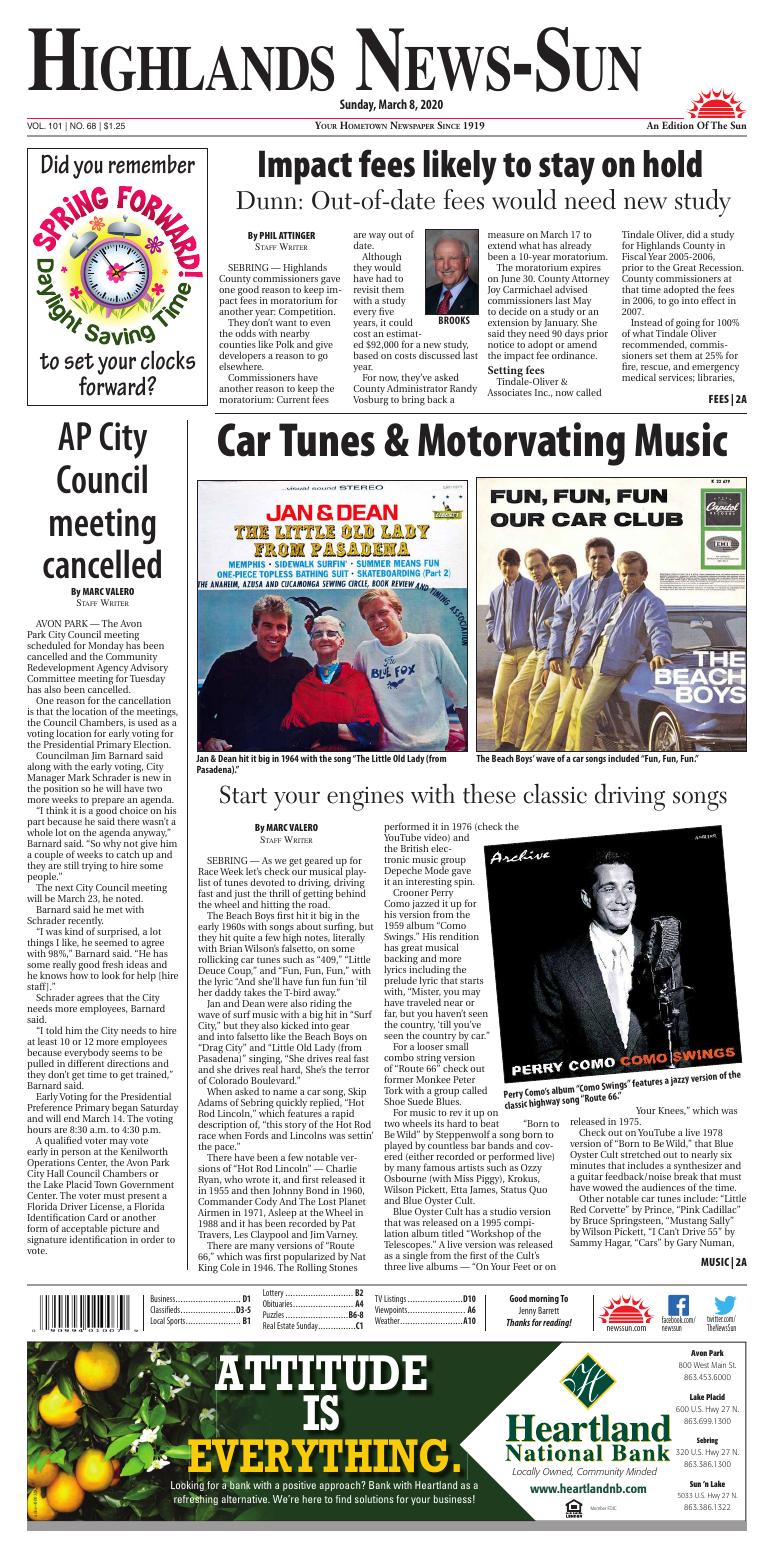 They don’t want to even the odds with nearby counties like Polk and give developers a reason to go elsewhere.

Commissioners have another reason to keep the moratorium: Current fees are way out of date.

Although they would have had to revisit them with a study every five years, it could cost an estimated $92,000 for a new study, based on costs discussed last year.

For now, they’ve asked County Administrator Randy Vosburg to bring back a measure on March 17 to extend what has already been a 10-year moratorium.

The moratorium expires on June 30. County Attorney Joy Carmichael advised commissioners last May to decide on a study or an extension by January. She said they need 90 days prior notice to adopt or amend the impact fee ordinance.

Tindale-Oliver & Associates Inc., now called Tindale Oliver, did a study for Highlands County in Fiscal Year 2005-2006, prior to the Great Recession. County commissioners at that time adopted the fees in 2006, to go into effect in 2007.

Instead of going for 100% of what Tindale Oliver recommended, commissioners set them at 25% for fire, rescue, and emergency medical services; libraries, parks, and recreation; correctional institutions; law enforcement, and transportation.

They set them at 50% for education.

Non-residential land uses would have paid only the fees for transportation and emergency fire and medical services.

By May 2009, commissioners voted 4-1 to suspend the fees after hearing from citizens who said the fees were starving the local economy.

Then-Commissioner Barbara Stewart dissented: “Everyone wants services, but no one wants to pay for them.”

Then-Commissioner C. Guy Maxcy said holding off on the fees would stimulate the local economy, but stimulus didn’t happen right away.

While commissioners waited for results, the Impact Fee Board, a county advisory body, pointed to a new study by Duncan Associates, James C. Nichols, and Wilbur Smith Associates that took issue with the 45 land use categories in the previous study.

Under the new study, fees would decrease for roads, schools, parks. libraries, fire/emergency services, and would increase for law enforcement and jails.

Commissioners did not adopt the changes, but put the fees on hiatus every year after that, in hopes that the local economy would recover.

Shortly after that, commissioners began talking with Highlands County Fire Services officials to look at a possible fire assessment to replace outdated and worn apparatus, expand or rebuild fire stations and possibly hire career firefighters to close any gaps in the volunteer firefighter system.

After at least five years of discussions and argument, the county commission adopted a countywide fire assessment in 2018, to take effect with the start of Fiscal Year 2018-2019. It also is not yet being assessed at 100%, but the rates were based on square footage of developed land and at a flat rate for vacant parcels.

Hurricane Irma hit in 2017, resulting in flooding throughout many existing subdivisions, prompting commissioners last April to discuss a possible countywide drainage assessment. They have not taken any movement in that direction, however.

Last May, in discussions over extending the impact fee moratorium to this year, Lake Placid Town Councilman Ray Royce and County Commissioner Jim Brooks both pointed out that the biggest impacts right now come from houses being built in existing subdivisions — ones platted before land development regulations that required good drainage systems, water/sewer lines or funds set aside for road capacity improvements.

Impact fees can only be assessed on individual homes or businesses, but not whole subdivisions when new ones are not being platted.

Brooks also said the fees can pay for new growth, but not existing deficiencies. County Engineer Clinton Howerton Jr. said not having funds to do improvements can be difficult, but added that having to manage limited resources is part of his job.

Development Services Director Benjamin Dunn also said that while fire and medical services were covered by impact fees, those fees would only have paid for new buildings, trucks and equipment, not salaries for full-time personnel.

Dunn also echoed Business Development Manager Meghan DiGiacomo, one of his lieutenants, who had said business and land developers’ “eyes light up” when they hear Highlands County has no impact fees, at least none that are active.

SEBRING — As we get geared up for Race Week let’s check our musical playlist of tunes devoted to driving, driving fast and just the thrill of getting behind the wheel and hitting the road.

The Beach Boys first hit it big in the early 1960s with songs about surfing, but they hit quite a few high notes, literally with Brian Wilson’s falsetto, on some rollicking car tunes such as “409,” “Little Deuce Coup,” and “Fun, Fun, Fun,” with the lyric “And she’ll have fun fun fun ‘til her daddy takes the T-bird away.”

Jan and Dean were also riding the wave of surf music with a big hit in “Surf City,” but they also kicked into gear and into falsetto like the Beach Boys on “Drag City” and “Little Old Lady (from Pasadena)” singing, “She drives real fast and she drives real hard, She’s the terror of Colorado Boulevard.”

When asked to name a car song, Skip Adams of Sebring quickly replied, “Hot Rod Lincoln,” which features a rapid description of, “this story of the Hot Rod race when Fords and Lincolns was settin’ the pace.”

There have been a few notable versions of “Hot Rod Lincoln” — Charlie Ryan, who wrote it, and first released it in 1955 and then Johnny Bond in 1960, Commander Cody And The Lost Planet Airmen in 1971, Asleep at the Wheel in 1988 and it has been recorded by Pat Travers, Les Claypool and Jim Varney.

There are many versions of “Route 66,” which was first popularized by Nat King Cole in 1946. The Rolling Stones performed it in 1976 (check the YouTube video) and the British electronic music group Depeche Mode gave it an interesting spin.

Crooner Perry Como jazzed it up for his version from the 1959 album “Como Swings.” His rendition has great musical backing and more lyrics including the prelude lyric that starts with, “Mister, you may have traveled near or far, but you haven’t seen the country, ‘till you’ve seen the country by car.”

For music to rev it up on two wheels its hard to beat “Born to Be Wild” by Steppenwolf a song born to played by countless bar bands and covered (either recorded or performed live) by many famous artists such as Ozzy Osbourne (with Miss Piggy), Krokus, Wilson Pickett, Etta James, Status Quo and Blue Oyster Cult.

Blue Oyster Cult has a studio version that was released on a 1995 compilation album titled “Workshop of the Telescopes.” A live version was released as a single from the first of the Cult’s three live albums — “On Your Feet or on Your Knees,” which was released in 1975.

Check out on YouTube a live 1978 version of “Born to Be Wild,” that Blue Oyster Cult stretched out to nearly six minutes that includes a synthesizer and a guitar feedback/noise break that must have wowed the audiences of the time.

Other notable car tunes include: “Little Red Corvette” by Prince, “Pink Cadillac” by Bruce Springsteen, “Mustang Sally” by Wilson Pickett, “I Can’t Drive 55” by Sammy Hagar, “Cars” by Gary Numan, “Drive My Car” by the Beatles, “Hey Little Cobra” by the Ripcords and “Long White Cadillac” by Dwight Yoakum.

Of course pickup trucks and the big rigs are a big part of country music and worthy of a separate examination and story.

In meantime lets, “Look at the sign, we’re in the wrong place, Move out boys and let’s get ready to race,” as sung by Bachman-Turner Overdrive on “Roll On Down the Highway.”

AVON PARK — The Avon Park City Council meeting scheduled for Monday has been cancelled and the Community Redevelopment Agency Advisory Committee meeting for Tuesday has also been cancelled.

One reason for the cancellation is that the location of the meetings, the Council Chambers, is used as a voting location for early voting for the Presidential Primary Election.

Councilman Jim Barnard said along with the early voting, City Manager Mark Schrader is new in the position so he will have two more weeks to prepare an agenda.

“I think it is a good choice on his part because he said there wasn’t a whole lot on the agenda anyway,” Barnard said. “So why not give him a couple of weeks to catch up and they are still trying to hire some people.”

The next City Council meeting will be March 23, he noted.

“I was kind of surprised, a lot things I like, he seemed to agree with 98%,” Barnard said. “He has some really good fresh ideas and he knows how to look for help [hire staff].”

“I told him the City needs to hire at least 10 or 12 more employees because everybody seems to be pulled in different directions and they don’t get time to get trained,” Barnard said.

Early Voting for the Presidential Preference Primary began Saturday and will end March 14. The voting hours are 8:30 a.m. to 4:30 p.m.

A qualified voter may vote early in person at the Kenilworth Operations Center, the Avon Park City Hall Council Chambers or the Lake Placid Town Government Center. The voter must present a Florida Driver License, a Florida Identification Card or another form of acceptable picture and signature identification in order to vote. 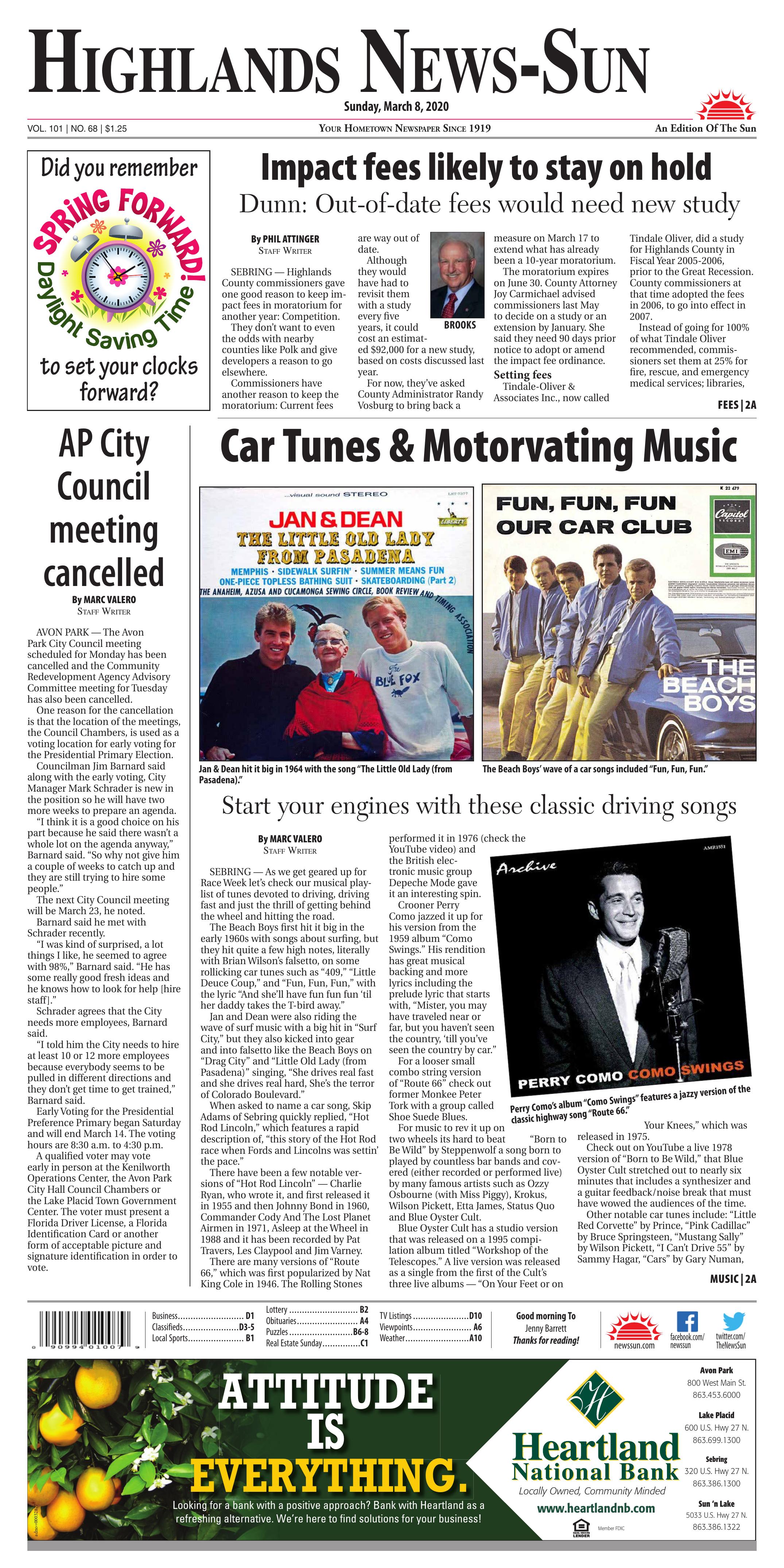