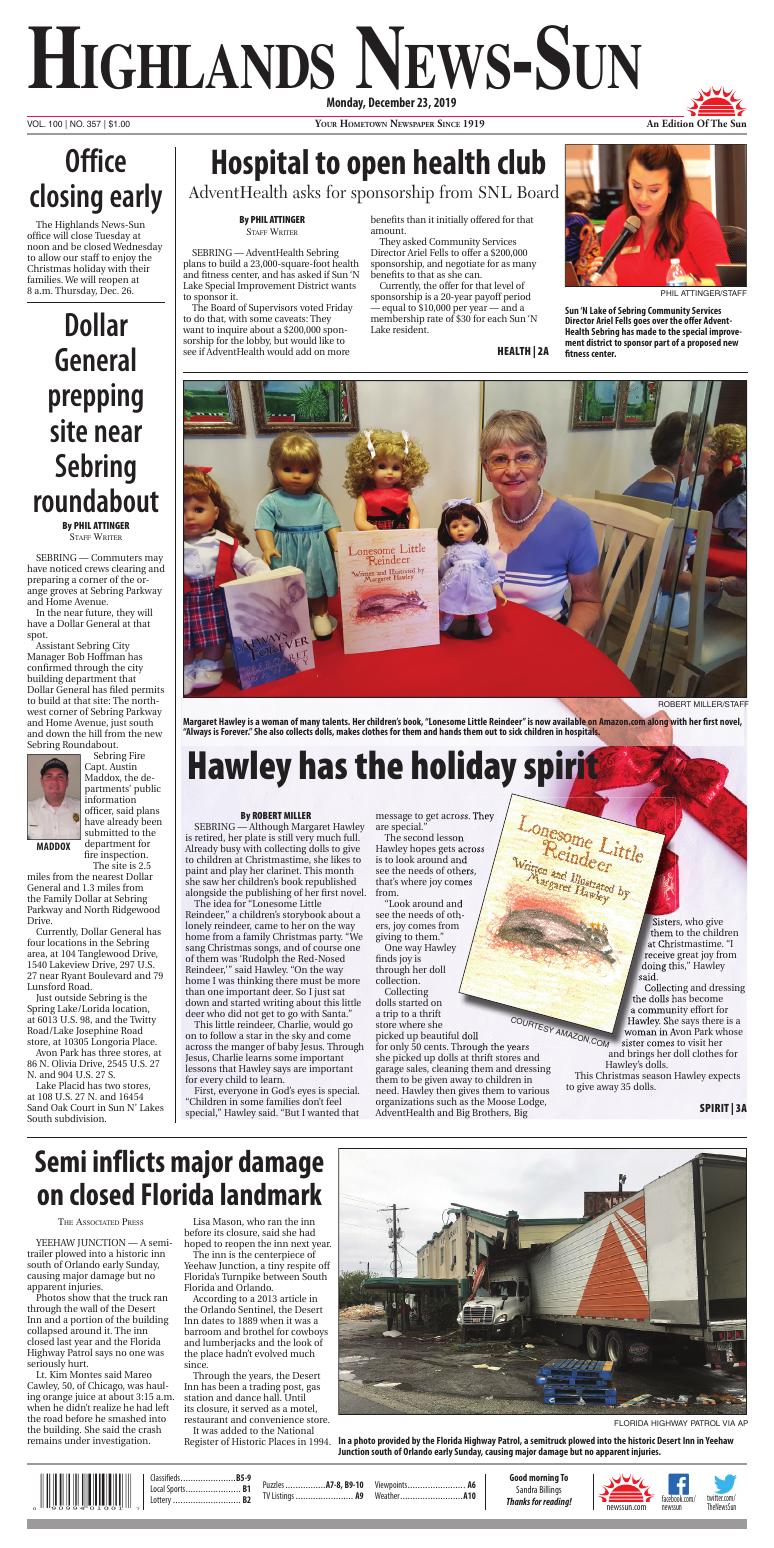 Sun ‘N Lake of Sebring Community Services Director Ariel Fells goes over the offer AdventHealth Sebring has made to the special improvement district to sponsor part of a proposed new fitness center. The Sun ‘N Lake Board of Supervisors has opted to offer $200,000, but negotiate for more in return than the hospital has offered.

This map shows the location of a proposed new health facility at the top of this map from AdventHealth Sebring. The new 23,000-square-foot facility would have exercise rooms, equipment, sauna, manicure/pedicure stations and even education areas. The hospital is asking Sun ‘N Lake Special Improvement District to help sponsor the facility.

SEBRING — AdventHealth Sebring plans to build a 23,000-square-foot health and fitness center, and has asked if Sun ‘N Lake Special Improvement District wants to sponsor it.

The Board of Supervisors voted Friday to do that, with some caveats: They want to inquire about a $200,000 sponsorship for the lobby, but would like to see if AdventHealth would add on more benefits than it initially offered for that amount.

They asked Community Services Director Ariel Fells to offer a $200,000 sponsorship, and negotiate for as many benefits to that as she can.

Currently, the offer for that level of sponsorship is a 20-year payoff period — equal to $10,000 per year — and a membership rate of $30 for each Sun ‘N Lake resident.

Supervisors and residents were dubious, however, at Friday’s board meeting of how much they wanted to see the district spend to sponsor part of the facility, if it invests at all. The district has its own fitness center as part of the Community Center on Edgewater Drive, but it doesn’t have near the accommodations or amenities the AdventHealth center would have.

Fells said the facility, as proposed, would be a 23,000-square-foot, 24-hour facility with a 1.3-mile wellness trail with fitness obstacles, golf cart parking and a community garden.

By comparison, the district’s facility is small.

Currently, the district has a fitness center in its community center on Edgewater Drive, but to build a 4,000 to 5,000-square-foot facility to this standard, Fells said, would cost the district $525,000 in construction, $342,000 in exercise machinery and equipment, plus another $255,000 for full-time and part-time staff.

Total cost to the district would be $1.12 million to get started, and the district facility would compete with the AdventHealth facility for members in a market already saturated enough to close down a local Gold’s Gym.

The supervisors were eyeing the idea of sponsoring the lobby area, at $200,000.

Vice President Neal Hotelling noted that many residents are already members of either the hospital or another local fitness center through the “Silver Sneakers” program. He asked if AdventHealth would honor that, and Fells said she was told they would.

Hotelling noted that a 5% increase in assessments would pay for a sponsorship, even if the district had to borrow money first.

Fells also said closing the district fitness center, in favor of the AdventHealth facility, would lower overhead costs at the Community Center.

Supervisor Raymond Brooks, however, asked whether the district should try to build itself up or AdventHealth.

“I don’t want to have [to pay] to build up Florida Hospital [AdventHealth]” Brooks said.

Fells said the district, by closing a fitness center, would remove itself from associated liability, staffing costs and upkeep on its facility.

“They can build better [facilities] than we can,” Hotelling said.

Dave Halbig, former supervisor, told the board that AdventHealth is a “cornerstone” of the district.

“That’s the best thing I’ll say about it,” Halbig said, noting that the district has spent $5,000 per year on the hospital foundation’s annual fundraising gala.

Prior to this, he said, the hospital had a facility, but closed it down and donated the equipment to another subdivision’s recreation center, and enjoys tax breaks for being a non-profit corporation.

He then said donating to AdventHealth would be a misuse of public funds.

Other arguments from the floor were that Planet Fitness is soon to open at Lakeshore Mall, which will make for more competition. Also, residents said people on a fixed income might decide to move away if forced to pay a higher assessment.

George Puffenberger, former district manager, said he thought the fee was going to be $25 for Sun ‘N Lake residents, firefighters and military veterans.

Fells said that may still be true, but she didn’t have that in her information.

“If you raise assessments any more,” Puffenberger said, “you’ve heard nothing yet.”

Still, supervisors favored trying to get a better deal for a $200,000 donation.

“The worst thing you can get is ‘no,’” said Board President Joe Branson. “You don’t get it if you don’t ask.”

Margaret Hawley is a woman of many talents. Her children’s book, “Lonesome Little Reindeer” is now available on Amazon.com along with her first novel, “Always is Forever.” She also collects dolls, makes clothes for them and hands them out to sick children in hospitals.

This painting of a seascape from a balcony was painted by Hawley and hangs in her living room.

SEBRING — Although Margaret Hawley is retired, her plate is still very much full. Already busy with collecting dolls to give to children at Christmastime, she likes to paint and play her clarinet. This month she saw her children’s book republished alongside the publishing of her first novel.

The idea for “Lonesome Little Reindeer,” a children’s storybook about a lonely reindeer, came to her on the way home from a family Christmas party. “We sang Christmas songs, and of course one of them was ‘Rudolph the Red-Nosed Reindeer,’” said Hawley. “On the way home I was thinking there must be more than one important deer. So I just sat down and started writing about this little deer who did not get to go with Santa.”

This little reindeer, Charlie, would go on to follow a star in the sky and come across the manger of baby Jesus. Through Jesus, Charlie learns some important lessons that Hawley says are important for every child to learn.

First, everyone in God’s eyes is special. “Children in some families don’t feel special,” Hawley said. “But I wanted that message to get across. They are special.”

The second lesson Hawley hopes gets across is to look around and see the needs of others, that’s where joy comes from.

“Look around and see the needs of others, joy comes from giving to them.”

One way Hawley finds joy is through her doll collection.

Collecting dolls started on a trip to a thrift store where she picked up beautiful doll for only 50 cents. Through the years she picked up dolls at thrift stores and garage sales, cleaning them and dressing them to be given away to children in need. Hawley then gives them to various organizations such as the Moose Lodge, AdventHealth and Big Brothers, Big Sisters, who give them to the children at Christmastime. “I receive great joy from doing this,” Hawley said.

Collecting and dressing the dolls has become a community effort for Hawley. She says there is a woman in Avon Park whose sister comes to visit her and brings her doll clothes for Hawley’s dolls.

This Christmas season Hawley expects to give away 35 dolls.

After writing the children’s book, Hawley caught the writing bug and went to work on a manuscript she had started many years ago. This would become her first novel, “Always is Forever.” She wrote it in parts, the oldest part dating back over 30 years ago. Motivated by the publishing of “Lonesome Little Reindeer” and with some encouragement from her daughter, she wrote the opening to the book. Now “Always is Forever” can be found on Amazon.com along with her children’s book. Both books are expected in bookstores soon.

The story depicts a young woman who gives up her baby only to have the child and the child’s estranged father coming back into her life years later. “It makes me cry every time I read it.”

Hawley says the book is very touching. “Whenever I give it away I put a tissue inside to wipe away the tears.”

Hawley did all the illustrations for “Lonesome Little Reindeer” herself. When she has free time, she also enjoys painting. Her home is adorned in some of her own paintings and even has one hanging in the office at The Bluffs.

Anyone who is interested in helping Hawley out with dolls, material or thread for clothing can reach her by phone at 309-453-5904.

In a photo provided by the Florida Highway Patrol, a semitruck plowed into the historic Desert Inn in Yeehaw Junction south of Orlando early Sunday, causing major damage but no apparent injuries.

Photos show that the truck ran through the wall of the Desert Inn and a portion of the building collapsed around it. The inn closed last year and the Florida Highway Patrol says no one was seriously hurt.

Lt. Kim Montes said Mareo Cawley, 50, of Chicago, was hauling orange juice at about 3:15 a.m. when he didn’t realize he had left the road before he smashed into the building. She said the crash remains under investigation.

Lisa Mason, who ran the inn before its closure, said she had hoped to reopen the inn next year.

The inn is the centerpiece of Yeehaw Junction, a tiny respite off Florida’s Turnpike between South Florida and Orlando.

According to a 2013 article in the Orlando Sentinel, the Desert Inn dates to 1889 when it was a barroom and brothel for cowboys and lumberjacks and the look of the place hadn’t evolved much since.

Through the years, the Desert Inn has been a trading post, gas station and dance hall. Until its closure, it served as a motel, restaurant and convenience store.

It was added to the National Register of Historic Places in 1994.

The Highlands News-Sun office will close Tuesday at noon and be closed Wednesday to allow our staff to enjoy the Christmas holiday with their families. We will reopen at 8 a.m. Thursday, Dec. 26.

SEBRING — Commuters may have noticed crews clearing and preparing a corner of the orange groves at Sebring Parkway and Home Avenue.

In the near future, they will have a Dollar General at that spot.

Assistant Sebring City Manager Bob Hoffman has confirmed through the city building department that Dollar General has filed permits to build at that site: The northwest corner of Sebring Parkway and Home Avenue, just south and down the hill from the new Sebring Roundabout.

Just outside Sebring is the Spring Lake/Lorida location, at 6013 U.S. 98, and the Twitty Road/Lake Josephine Road store, at 10305 Longoria Place. 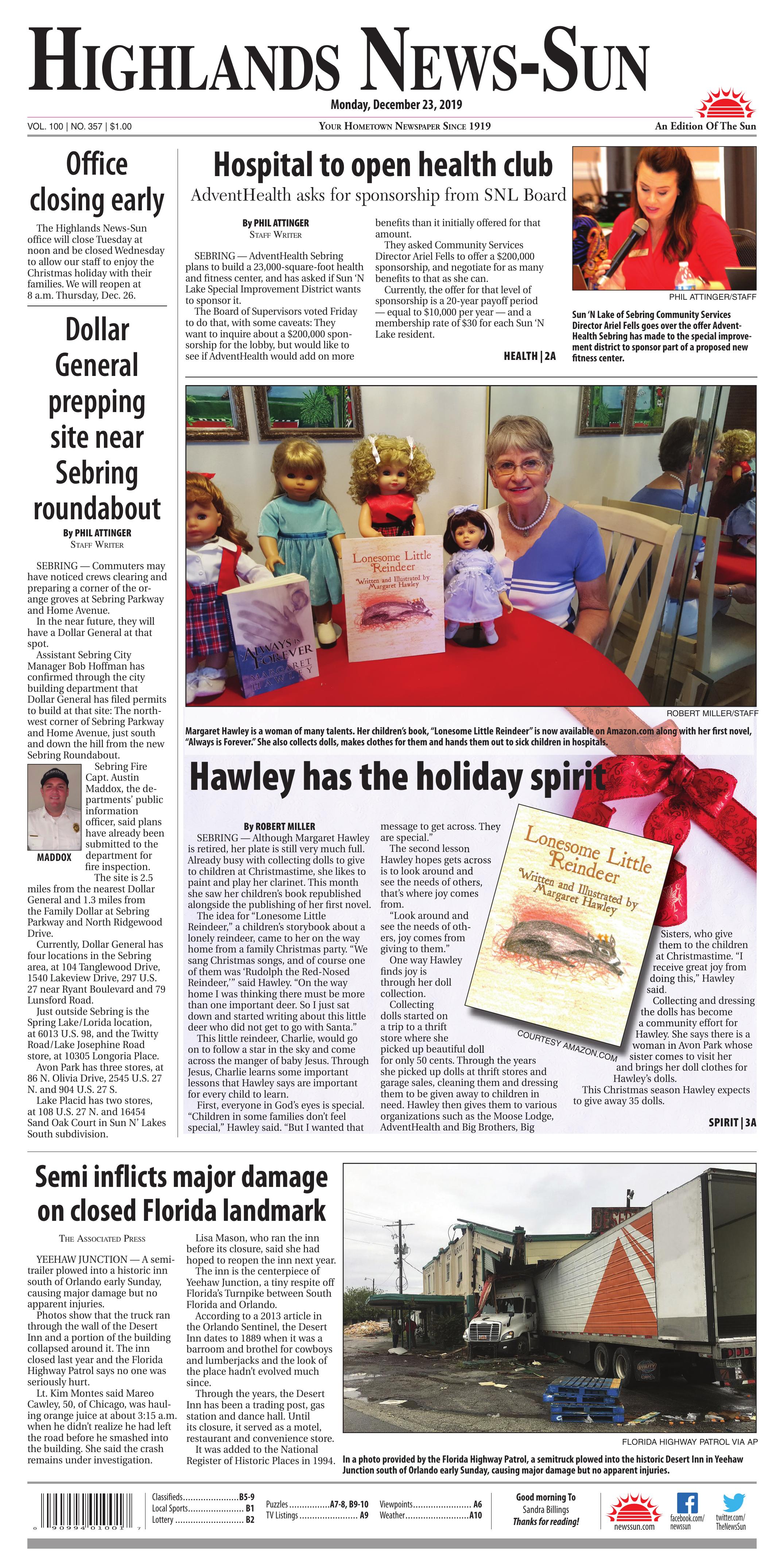