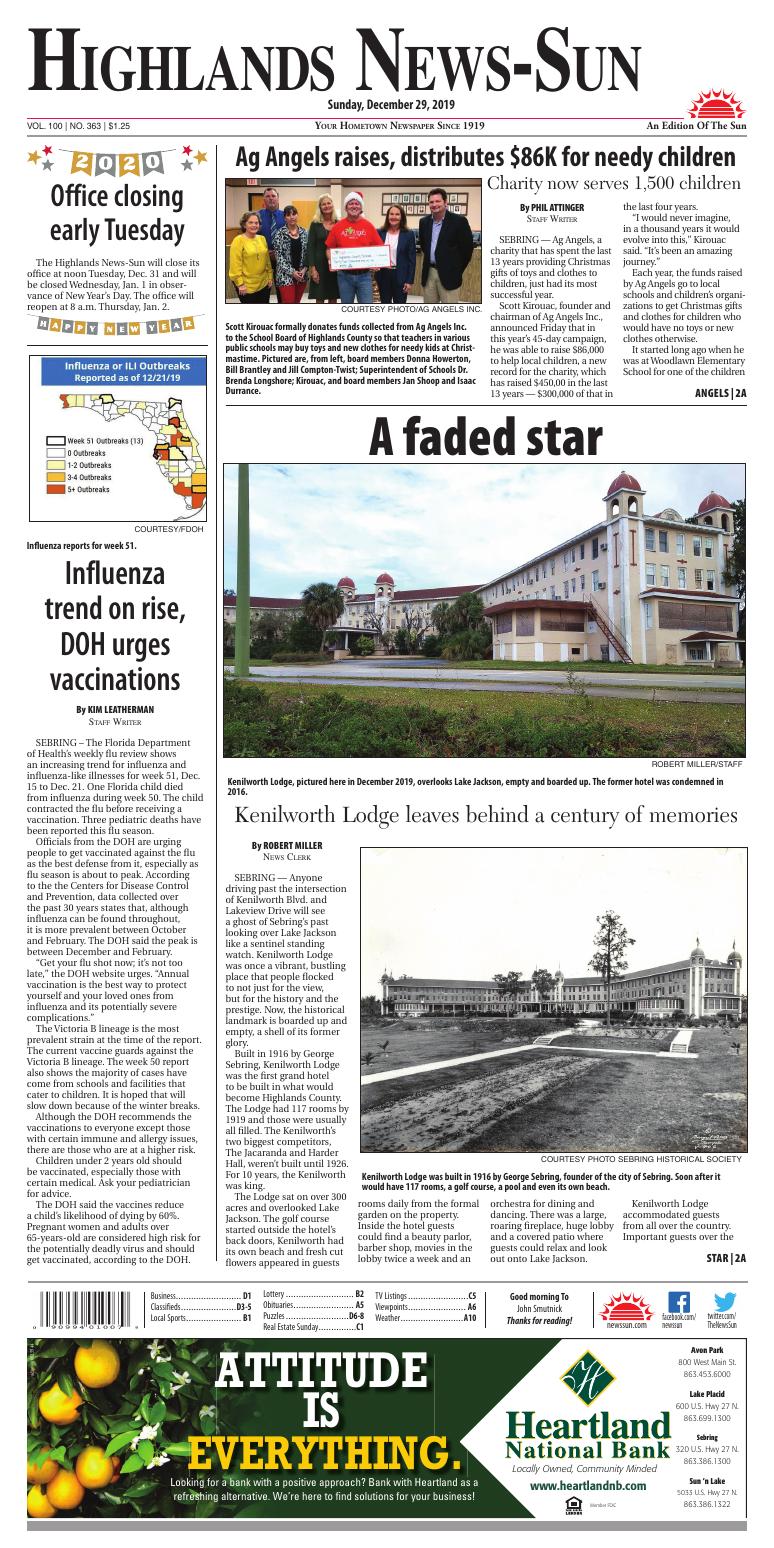 Scott Kirouac formally donates funds collected from Ag Angels Inc. to the School Board of Highlands County so that teachers in various public schools may buy toys and new clothes for needy kids at Christmastime. Pictured are, from left, board members Donna Howerton, Bill Brantley and Jill Compton-Twist; Superintendent of Schools Dr. Brenda Longshore; Kirouac, and board members Jan Shoop and Isaac Durrance.

Scott Kirouac of Ag Angels makes a Christmas donation to Big Brothers Big Sisters of Highlands County to help pay for gifts and new clothes for some of the needy children in the Big Brother Big Sister program.

Scott Kirouac of Ag Angels makes a Christmas donation to Redlands Christan Migrant Association to help pay for gifts and new clothes for some of the needy children in the children’s education program.

Scott Kirouac of Ag Angels makes a Christmas donation to East Coast Migrant Head Start Project to help pay for gifts and new clothes for some of the needy children in the children’s education program.

SEBRING — Ag Angels, a charity that has spent the last 13 years providing Christmas gifts of toys and clothes to children, just had its most successful year.

“I would never imagine, in a thousand years it would evolve into this,” Kirouac said. “It’s been an amazing journey.”

Each year, the funds raised by Ag Angels go to local schools and children’s organizations to get Christmas gifts and clothes for children who would have no toys or new clothes otherwise.

It started long ago when he was at Woodlawn Elementary School for one of the children in his own family when a little girl walked into the office.

She had on a dirty dress and shoes that were way too big with her, repaired with duct tape, he said. He was told by school staff she was one of the children there who would go without having a Christmas at all.

They would arrive back at school in January unable to talk with other children about what they got for Christmas and still wearing the same clothes they had on before the holidays.

“Some kids wear the same clothes each day of the week. Kids are all victims of their situations,” Kirouac said, noting that he couldn’t fix the economic problems parents have that might lead to such situations, or irresponsible spending that left nothing to clothe and celebrate a child.

“But I can help a child out,” he said. “They did not ask to be put in the situation they are in.”

He gave $500 to help out the first child, and got back a letter of thanks.

He raised money the next year and it grew to $1,200, and began to expand from elementary schools to include secondary schools.

Ag Angels then expanded to include Hardee County schools, thanks to Kirouac’s business connections through the Nursery Garden Association.

Each year, he sends out a letter towards the beginning of November — Nov. 8 — just when everyone starts to think about their holiday gift giving.

In the letter, he includes a tally of the previous year’s donations, at least four letters of testimony from children and families who benefit from the help, and a self-addressed stamped envelope for the donation.

“One hundred percent of what people donate goes to the cause,” Kirouac said. “I pay the [credit] processing fee.”

He also absorbs the cost of postage and has friends at Creative Printing help with printing the letters.

That way, all the donations go to the children.

He has teachers identify those who need help, and then has the teachers shop for them. No money is given to the parents, just in case it might go to a bill or other expenses.

Once the teachers buy the clothes, toys and other items for the kids, they sent Kirouac their receipts, so he can have them on file, and a heartfelt letter of thanks.

Then he starts back up again each fall.

He might lose some donors, as with one corporate donor whose $5,000 donation dropped to $1,000 one year. Immediately afterward, Kirouac got three new donors who donated a total of $4,000.

“That’s how it works,” Kirouac said. “It truly has been a blessing. Opening those envelopes [from donors]: That’s my Christmas.”

Now, the non-profit he started helps up to 1,500 children a year, and counting.

“I will continue doing [this] as long as I can,” Kirouac said, noting he created a “monster” that is still growing. “I can’t stop now. Why would I stop now?”

Kenilworth Lodge, pictured here in December 2019, overlooks Lake Jackson, empty and boarded up. The former hotel was condemned in 2016.

Kenilworth Lodge was built in 1916 by George Sebring, founder of the city of Sebring. Soon after it would have 117 rooms, a golf course, a pool and even its own beach.

SEBRING — Anyone driving past the intersection of Kenilworth Blvd. and Lakeview Drive will see a ghost of Sebring’s past looking over Lake Jackson like a sentinel standing watch. Kenilworth Lodge was once a vibrant, bustling place that people flocked to not just for the view, but for the history and the prestige. Now, the historical landmark is boarded up and empty, a shell of its former glory.

Built in 1916 by George Sebring, Kenilworth Lodge was the first grand hotel to be built in what would become Highlands County. The Lodge had 117 rooms by 1919 and those were usually all filled. The Kenilworth’s two biggest competitors, The Jacaranda and Harder Hall, weren’t built until 1926. For 10 years, the Kenilworth was king.

The Lodge sat on over 300 acres and overlooked Lake Jackson. The golf course started outside the hotel’s back doors, Kenilworth had its own beach and fresh cut flowers appeared in guests rooms daily from the formal garden on the property. Inside the hotel guests could find a beauty parlor, barber shop, movies in the lobby twice a week and an orchestra for dining and dancing. There was a large, roaring fireplace, huge lobby and a covered patio where guests could relax and look out onto Lake Jackson.

Kenilworth Lodge accommodated guests from all over the country. Important guests over the years included governors from “all 42 states” during the 1924 Governors Conference held at the Lodge; Mr. Adolf M. Ochs, owner and publisher of the New York Times; and Evangeline Booth, the national head of the Salvation Army. In its early days, the Lodge did not permit children or pets and often boasted that it had a staff member for every guest. During the 1924 Governors conference, 100 employees handled more than 500 guests.

There have been famous people at Kenilworth Lodge throughout its history. Names such as Tom Cruise, Paul Newman, Dennis Quaid and Amelia Earhart have been guests at the hotel.

On June 15, 2000, Kenilworth Lodge was officially added to the National Register of Historic Places. The hotel joined other recognizable buildings already on the list including Harder Hall, the Highlands County Courthouse and the Downtown Historic District.

The Kenilworth even has its own legend of a ghost that haunts the halls of the historic building. Guests have reported doors opening and closing on their own, moving furniture and door knobs turning. All this activity is said to be on the third floor where, as the story goes, a manager from the 1950s died. Today, the hotel itself is the ghost.

Sadly, in August 2016 after turning 100 years old, the historic hotel was condemned by the city of Sebring due to multiple fire code violations. Now at 103 years old, the grand hotel still stands but sits empty and boarded, looking out over Lake Jackson, waiting to rise from the ashes and shine once again.

The Highlands News-Sun will close its office at noon Tuesday, Dec. 31 and will be closed Wednesday, Jan. 1 in observance of New Year’s Day. The office will reopen at 8 a.m. Thursday, Jan. 2.

County by county flu information from week 51 from the Florida Department of Health.

SEBRING – The Florida Department of Health’s weekly flu review shows an increasing trend for influenza and influenza-like illnesses for week 51, Dec. 15 to Dec. 21. One Florida child died from influenza during week 50. The child contracted the flu before receiving a vaccination. Three pediatric deaths have been reported this flu season.

Officials from the DOH are urging people to get vaccinated against the flu as the best defense from it, especially as flu season is about to peak. According to the the Centers for Disease Control and Prevention, data collected over the past 30 years states that, although influenza can be found throughout, it is more prevalent between October and February. The DOH said the peak is between December and February.

“Get your flu shot now; it’s not too late,” the DOH website urges. “Annual vaccination is the best way to protect yourself and your loved ones from influenza and its potentially severe complications.”

The Victoria B lineage is the most prevalent strain at the time of the report. The current vaccine guards against the Victoria B lineage. The week 50 report also shows the majority of cases have come from schools and facilities that cater to children. It is hoped that will slow down because of the winter breaks.

Although the DOH recommends the vaccinations to everyone except those with certain immune and allergy issues, there are those who are at a higher risk.

Children under 2 years old should be vaccinated, especially those with certain medical. Ask your pediatrician for advice.

The DOH said the vaccines reduce a child’s likelihood of dying by 60%. Pregnant women and adults over 65-years-old are considered high risk for the potentially deadly virus and should get vaccinated, according to the DOH.