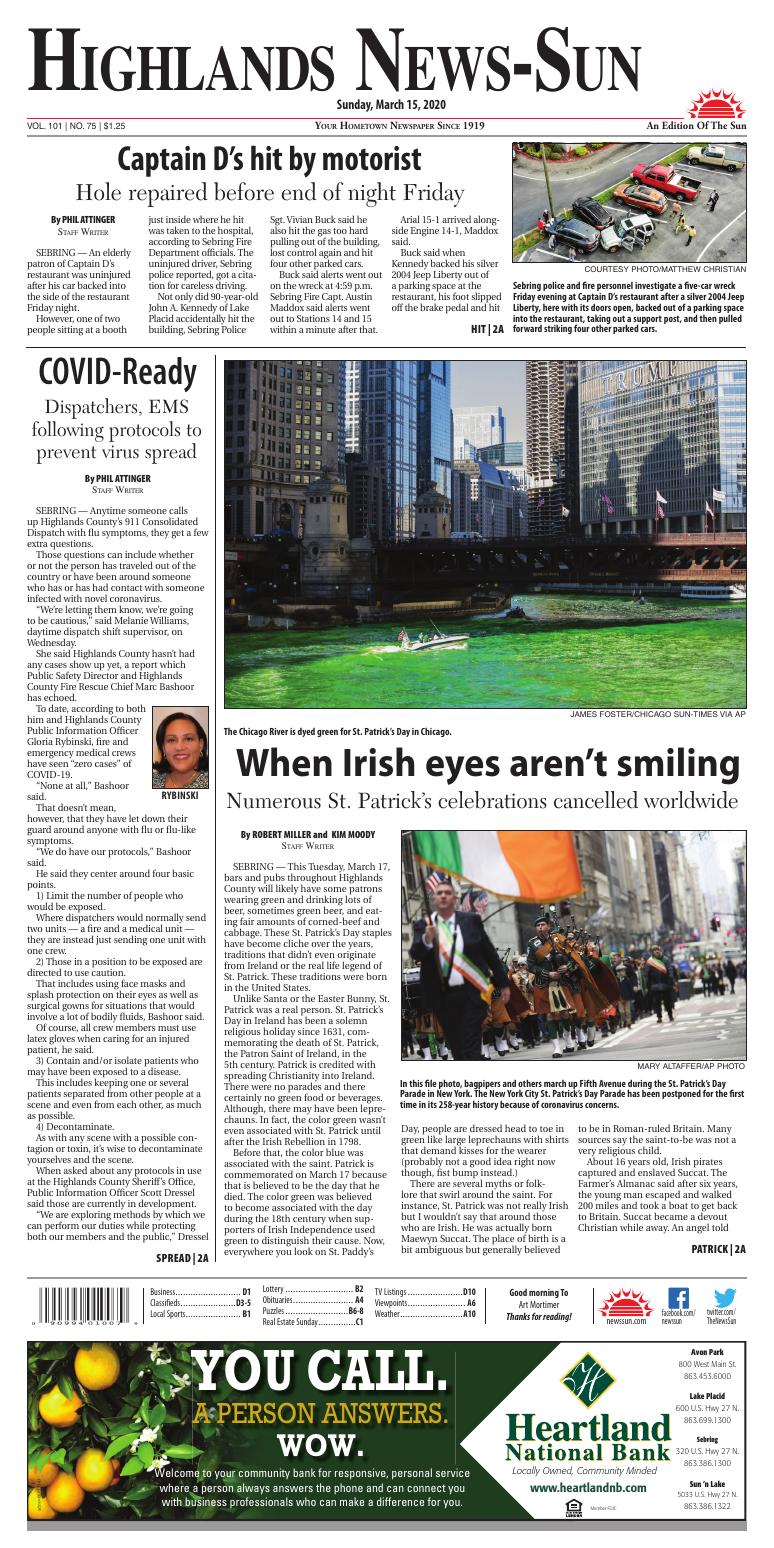 Sebring police and fire personnel investigate a five-car wreck Friday evening at Captain D’s restaurant after a silver 2004 Jeep Liberty, here with its doors open, backed out of a parking space into the restaurant, taking out a support post, and then pulled forward striking four other parked cars.

Sebring city firefighters help clear debris from when a patron of Captain D’s restaurant mistakenly backed out of a parking space into the side of the building. One patron sitting at a booth at the window got transported to the hospital, according to Sebring Fire Department officials.

Crews working late Friday night replace supports and repair a hole in the outer wall of Captain D’s restaurant in Sebring, after a patron mistakenly backed his car into the building, taking out a window and a booth. A person sitting there was taken to the hospital with non-life threatening injuries.

SEBRING — An elderly patron of Captain D’s restaurant was uninjured after his car backed into the side of the restaurant Friday night.

However, one of two people sitting at a booth just inside where he hit was taken to the hospital, according to Sebring Fire Department officials. The uninjured driver, Sebring police reported, got a citation for careless driving.

Not only did 90-year-old John A. Kennedy of Lake Placid accidentally hit the building, Sebring Police Sgt. Vivian Buck said he also hit the gas too hard pulling out of the building, lost control again and hit four other parked cars.

Buck said when Kennedy backed his silver 2004 Jeep Liberty out of a parking space at the restaurant, his foot slipped off the brake pedal and hit the accelerator.

He panicked, she said, and put his foot down on what he thought was the brake, but hit the accelerator and smashed into the building.

According to accounts told to Maddox, Kennedy then immediately put the car in drive to get out of the building. Buck said he panicked again and hit the accelerator.

He then tried to hit the brake again but either missed or his foot slipped off, she said. He veered left and hit another four parked cars, she said.

Maddox said in addition to knocking out a concrete block support post, the first impact also hit a booth just inside the restaurant where two people were sitting.

One of them had to be transported to the hospital, but Kennedy was uninjured, he said.

Maddox said the city building inspector came out and had to condemn the building until the post was repaired and electrical lines were fixed.

Fortunately, he said, managers had a contractor out soon after the wreck and the building was ready to reopen later that evening.

In this file photo, boats move through the water as the Chicago River is dyed green for St. Patrick’s Day in Chicago. Chicago on Wednesday, joined the growing ranks of cities across the United States to cancel its St. Patrick’s Day Parade amid concerns about the coronavirus. The city will not be dyeing the river green either.

The Chicago River is dyed green for St. Patrick’s Day in Chicago.

SEBRING — This Tuesday, March 17, bars and pubs throughout Highlands County will likely have some patrons wearing green and drinking lots of beer, sometimes green beer, and eating fair amounts of corned-beef and cabbage. These St. Patrick’s Day staples have become cliche over the years, traditions that didn’t even originate from Ireland or the real life legend of St. Patrick. These traditions were born in the United States.

Unlike Santa or the Easter Bunny, St. Patrick was a real person. St. Patrick’s Day in Ireland has been a solemn religious holiday since 1631, commemorating the death of St. Patrick, the Patron Saint of Ireland, in the 5th century. Patrick is credited with spreading Christianity into Ireland. There were no parades and there certainly no green food or beverages. Although, there may have been leprechauns. In fact, the color green wasn’t even associated with St. Patrick until after the Irish Rebellion in 1798.

Before that, the color blue was associated with the saint. Patrick is commemorated on March 17 because that is believed to be the day that he died. The color green was believed to become associated with the day during the 18th century when supporters of Irish Independence used green to distinguish their cause. Now, everywhere you look on St. Paddy’s Day, people are dressed head to toe in green like large leprechauns with shirts that demand kisses for the wearer (probably not a good idea right now though, fist bump instead.)

There are several myths or folklore that swirl around the saint. For instance, St. Patrick was not really Irish but I wouldn’t say that around those who are Irish. He was actually born Maewyn Succat. The place of birth is a bit ambiguous but generally believed to be in Roman-ruled Britain. Many sources say the saint-to-be was not a very religious child.

About 16 years old, Irish pirates captured and enslaved Succat. The Farmer’s Almanac said after six years, the young man escaped and walked 200 miles and took a boat to get back to Britain. Succat became a devout Christian while away. An angel told him to become a missionary and spread the gospel to the Irish, yes, the same people who enslaved him. He changed his name and obeyed.

Another probable myth is that he chased out all the snakes from Ireland. Most agree that snakes weren’t native to the area to begin with. The snake legend probably stems from his ministering to pagan people who often used snakes images in their religious symbols. Whatever the reason, he was very good at being a missionary, enough so that he is celebrated yearly.

He probably had no great affinity for clovers either, but it is a sign of the Holy Trinity.

In 2020 we are dealing with something St. Patrick never had to deal with, the coronavirus. Because of this latest pandemic, Ireland is under “lockdown” and Boston, Chicago, New York and many Florida cities are cancelling or postponing their parades and festivities. Not only is the Chicago parade cancelled this year, the Plumbers Union Local 130 will skip the tradition of turning the Chicago River green.

Irish bars will be feeling a little green around the gills with the loss of the income they will suffer this year. This year’s St. Patrick’s Day may go down in history as the St. Patrick’s day that wasn’t.

SEBRING — Anytime someone calls up Highlands County’s 911 Consolidated Dispatch with flu symptoms, they get a few extra questions.

Those questions can include whether or not the person has traveled out of the country or have been around someone who has or has had contact with someone infected with novel coronavirus.

To date, according to both him and Highlands County Public Information Officer Gloria Rybinski, fire and emergency medical crews have seen “zero cases” of COVID-19.

“None at all,” Bashoor said.

That doesn’t mean, however, that they have let down their guard around anyone with flu or flu-like symptoms.

“We do have our protocols,” Bashoor said.

He said they center around four basic points.

1) Limit the number of people who would be exposed.

Where dispatchers would normally send two units — a fire and a medical unit — they are instead just sending one unit with one crew.

2) Those in a position to be exposed are directed to use caution.

That includes using face masks and splash protection on their eyes as well as surgical gowns for situations that would involve a lot of bodily fluids, Bashoor said.

Of course, all crew members must use latex gloves when caring for an injured patient, he said.

3) Contain and/or isolate patients who may have been exposed to a disease.

This includes keeping one or several patients separated from other people at a scene and even from each other, as much as possible.

As with any scene with a possible contagion or toxin, it’s wise to decontaminate yourselves and the scene.

When asked about any protocols in use at the Highlands County Sheriff’s Office, Public Information Officer Scott Dressel said those are currently in development.

“We are exploring methods by which we can perform our duties while protecting both our members and the public,” Dressel said.

The Assistant Secretary for Preparedness and Response’s EMS Infectious Disease Playbook from 2017 states that the caller has to give good information and the dispatcher has to gather good information to provide the correct response.

Ideally, the manual states, 911 call takers/emergency medical dispatchers will identify possible infectious disease patients by asking a series of routine screening questions and relay that information to emergency responders prior to their arrival on the scene.

The manual states that screening for infectious disease often involves questions about travel to endemic areas and what signs or symptoms the patient has, but symptoms alone don’t indicate a terrible disease.

Fever, for example, might be a key symptom, but should not be used exclusively to determine the presence of a disease.

Dispatchers might also include other questions if local conditions have included other diseases, conditions or symptoms, and dispatchers might note that an address has someone with the disease, as long as that note in the files is removed once an epidemic has passed. 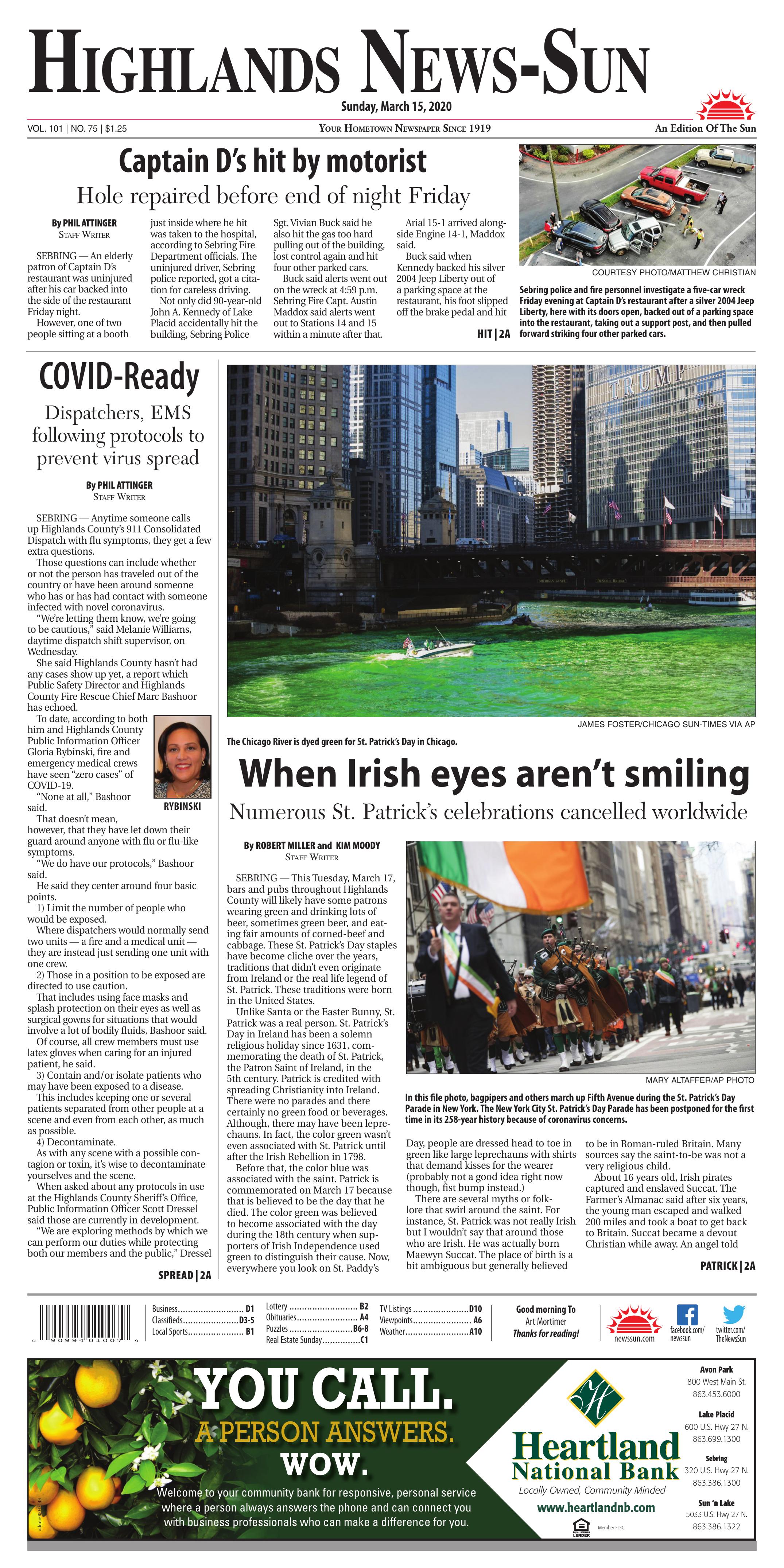