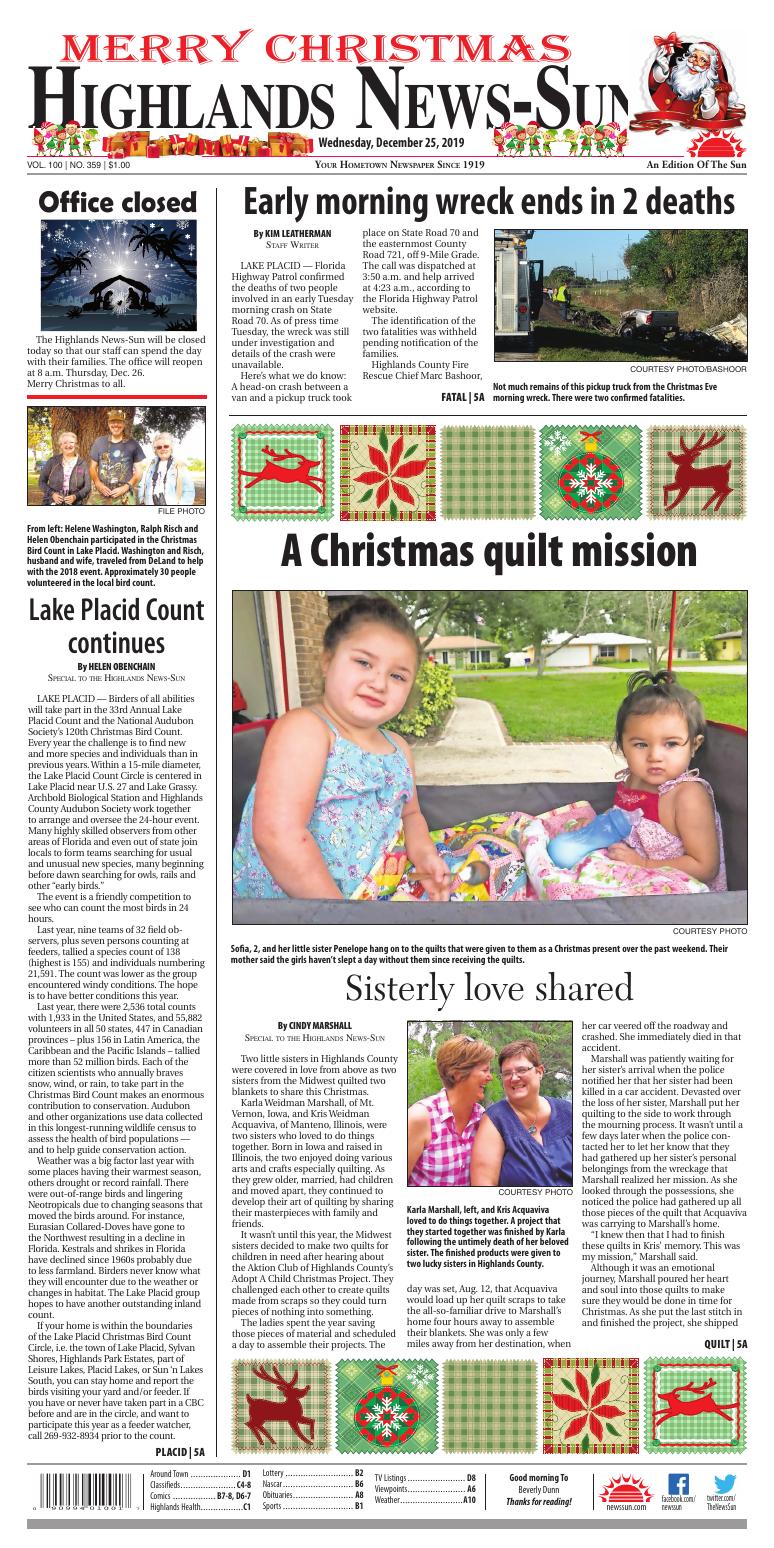 Not much remains of this pickup truck from the Christmas Eve morning wreck. There were two confirmed fatalities.

LAKE PLACID — Florida Highway Patrol confirmed the deaths of two people involved in an early Tuesday morning crash on State Road 70. As of press time Tuesday, the wreck was still under investigation and details of the crash were unavailable.

Here’s what we do know: A head-on crash between a van and a pickup truck took place on State Road 70 and the easternmost County Road 721, off 9-Mile Grade. The call was dispatched at 3:50 a.m. and help arrived at 4:23 a.m., according to the Florida Highway Patrol website.

Highlands County Fire Rescue Chief Marc Bashoor, who was at the scene, said there were three people transported to Raulerson Hospital in Okeechobee. Two other people refused to go to the hospital for treatment.

Traffic in both the east and westbound lanes were closed for hours.

The stretch of State Road 70 from U. S. 27 east to the county line is a dangerous two-lane highway that runs east and west. Many serious wrecks and fatalities take place on that portion of the highway. Four people died on Christmas Day one year ago followed by the death of a 6-month-old baby just a few weeks after.

Last week, a semi crashed into a guard rail that cut the cab in half. The trucker did live.

According to an unofficial record kept by the Highlands News-Sun, these latest two fatalities bring the death total to 23 people on Highlands County roads this year. Three of those fatalities are listed as pedestrians, according to our unofficial count.

Sofia, 2, and her little sister Penelope hang on to the quilts that were given to them as a Christmas present over the past weekend. Their mother said the girls haven’t slept a day without them since receiving the quilts.

Karla Marshall, left, and Kris Acquaviva loved to do things together. A project that they started together was finished by Karla following the untimely death of her beloved sister. The finished products were given to two lucky sisters in Highlands County.

Alisa Tucciarone, of Sebring, holds the quilt and her daughter Sofia, as Santa Claus holds Penelope and the quilt she is receiving from two Midwest sisters who stitched the blankets of love given by the Aktion Club of Highlands County.

Two little sisters in Highlands County were covered in love from above as two sisters from the Midwest quilted two blankets to share this Christmas.

Karla Weidman Marshall, of Mt. Vernon, Iowa, and Kris Weidman Acquaviva, of Manteno, Illinois, were two sisters who loved to do things together. Born in Iowa and raised in Illinois, the two enjoyed doing various arts and crafts especially quilting. As they grew older, married, had children and moved apart, they continued to develop their art of quilting by sharing their masterpieces with family and friends.

It wasn’t until this year, the Midwest sisters decided to make two quilts for children in need after hearing about the Aktion Club of Highlands County’s Adopt A Child Christmas Project. They challenged each other to create quilts made from scraps so they could turn pieces of nothing into something.

The ladies spent the year saving those pieces of material and scheduled a day to assemble their projects. The day was set, Aug. 12, that Acquaviva would load up her quilt scraps to take the all-so-familiar drive to Marshall’s home four hours away to assemble their blankets. She was only a few miles away from her destination, when her car veered off the roadway and crashed. She immediately died in that accident.

Marshall was patiently waiting for her sister’s arrival when the police notified her that her sister had been killed in a car accident. Devasted over the loss of her sister, Marshall put her quilting to the side to work through the mourning process. It wasn’t until a few days later when the police contacted her to let her know that they had gathered up her sister’s personal belongings from the wreckage that Marshall realized her mission. As she looked through the possessions, she noticed the police had gathered up all those pieces of the quilt that Acquaviva was carrying to Marshall’s home.

“I knew then that I had to finish these quilts in Kris’ memory. This was my mission,” Marshall said.

Although it was an emotional journey, Marshall poured her heart and soul into those quilts to make sure they would be done in time for Christmas. As she put the last stitch in and finished the project, she shipped both quilts to the Aktion Club with the mission that they had to find two very special children who could use these blankets of love.

As the club looked over the list of 70 children who they provided more than 500 gifts including bikes, toys, clothing and food, they found two very special sisters who they felt would appreciate these quilts. Santa Claus and his Aktion Club elves loaded up the quilts along with the gifts provided by club, Advent Health, Leisure Acres Mobile Home Park, Highlands County Moose Lodge and various businesses and individuals to deliver to children from the Family Safehouse, Special STARS and the Early Steps Program, which serves children from birth to age 3 with disabilities.

Santa and the Aktion Club made their rounds throughout the county on Saturday, Dec. 21, to deliver their gifts. When they reached their destination for the quilts, Santa carried them in and the shared the story with the family of Alisa Tucciarone of Sebring.

As the story was shared about the mission of these two Midwest ladies, Tucciarone wiped away the tears and said, “We will always cherish these quilts.”

Tucciarone has two daughters – Sofia, who is 2 and has autism, and Penelope, who is 1. Tucciarone’s oldest daughter receives services from Early Steps. Tucciarone had recently moved back to Sebring to live with her parents after leaving Ohio due to personal financial hardships. With her life turned upside down, Tucciarone had no idea what was about to unfold onto her as Santa handed over the quilts.

Coincidentally, Acquavia had two daughters and one of them is named Sophie. Marshall shared with the club that her sister always had a fascination with autism and followed a Vlog on the internet to learn more about the disability.

Once Marshall learned that the Christmas quilt mission had been completed, she said, “That is what Christmas is all about.”

Santa’s message to Tucciarone and her family was, “Even when you feel that times are rough and you have nothing, always remember that pieces of nothing can turn into something.”

The Highlands News-Sun will be closed today so that our staff can spend the day with their families. The office will reopen at 8 a.m. Thursday, Dec. 26. Merry Christmas to all.

From left: Helene Washington, Ralph Risch and Helen Obenchain participated in the Christmas Bird Count in Lake Placid. Washington and Risch, husband and wife, traveled from DeLand to help with the 2018 event. Approximately 30 people volunteered in the local bird count.

LAKE PLACID — Birders of all abilities will take part in the 33rd Annual Lake Placid Count and the National Audubon Society’s 120th Christmas Bird Count. Every year the challenge is to find new and more species and individuals than in previous years. Within a 15-mile diameter, the Lake Placid Count Circle is centered in Lake Placid near U.S. 27 and Lake Grassy. Archbold Biological Station and Highlands County Audubon Society work together to arrange and oversee the 24-hour event. Many highly skilled observers from other areas of Florida and even out of state join locals to form teams searching for usual and unusual new species, many beginning before dawn searching for owls, rails and other “early birds.”

The event is a friendly competition to see who can count the most birds in 24 hours.

Last year, nine teams of 32 field observers, plus seven persons counting at feeders, tallied a species count of 138 (highest is 155) and individuals numbering 21,591. The count was lower as the group encountered windy conditions. The hope is to have better conditions this year.

Last year, there were 2,536 total counts with 1,933 in the United States, and 55,882 volunteers in all 50 states, 447 in Canadian provinces – plus 156 in Latin America, the Caribbean and the Pacific Islands – tallied more than 52 million birds. Each of the citizen scientists who annually braves snow, wind, or rain, to take part in the Christmas Bird Count makes an enormous contribution to conservation. Audubon and other organizations use data collected in this longest-running wildlife census to assess the health of bird populations — and to help guide conservation action.

Weather was a big factor last year with some places having their warmest season, others drought or record rainfall. There were out-of-range birds and lingering Neotropicals due to changing seasons that moved the birds around. For instance, Eurasian Collared-Doves have gone to the Northwest resulting in a decline in Florida. Kestrals and shrikes in Florida have declined since 1960s probably due to less farmland. Birders never know what they will encounter due to the weather or changes in habitat. The Lake Placid group hopes to have another outstanding inland count.

If your home is within the boundaries of the Lake Placid Christmas Bird Count Circle, i.e. the town of Lake Placid, Sylvan Shores, Highlands Park Estates, part of Leisure Lakes, Placid Lakes, or Sun ‘n Lakes South, you can stay home and report the birds visiting your yard and/or feeder. If you have or never have taken part in a CBC before and are in the circle, and want to participate this year as a feeder watcher, call 269-932-8934 prior to the count.

From Dec. 14 through Jan. 5, tens of thousands of volunteers throughout the Americas take part in an adventure that has become a family tradition among generations. Families and students, birders and scientists, armed with binoculars, bird guides and checklists go out on an annual mission — often before dawn. The desire to both make a difference and to experience the beauty of nature has driven dedicated people to leave the comfort of a warm house during the holiday season. From feeder-watchers and field observers to count compilers and regional editors, everyone who takes part in the Christmas Bird Count does it for love of birds and the excitement of friendly competition — and with the knowledge that their efforts are making a difference for science and bird conservation.

The data collected by observers over the past century allow researchers, conservation biologists, and other interested individuals to study the long-term health and status of bird populations across North America. When combined with other surveys such as the Breeding Bird Survey, it provides a picture of how the continent’s bird populations have changed in time and space over the past hundred years.

The long-term perspective made possible by the Christmas Bird Count is vital for conservationists. It informs strategies to protect birds and their habitat — and helps identify environmental issues with implications for people as well. For example, local trends in bird populations can indicate habitat fragmentation or signal an immediate environmental threat, such as groundwater contamination or poisoning from improper use of pesticides. 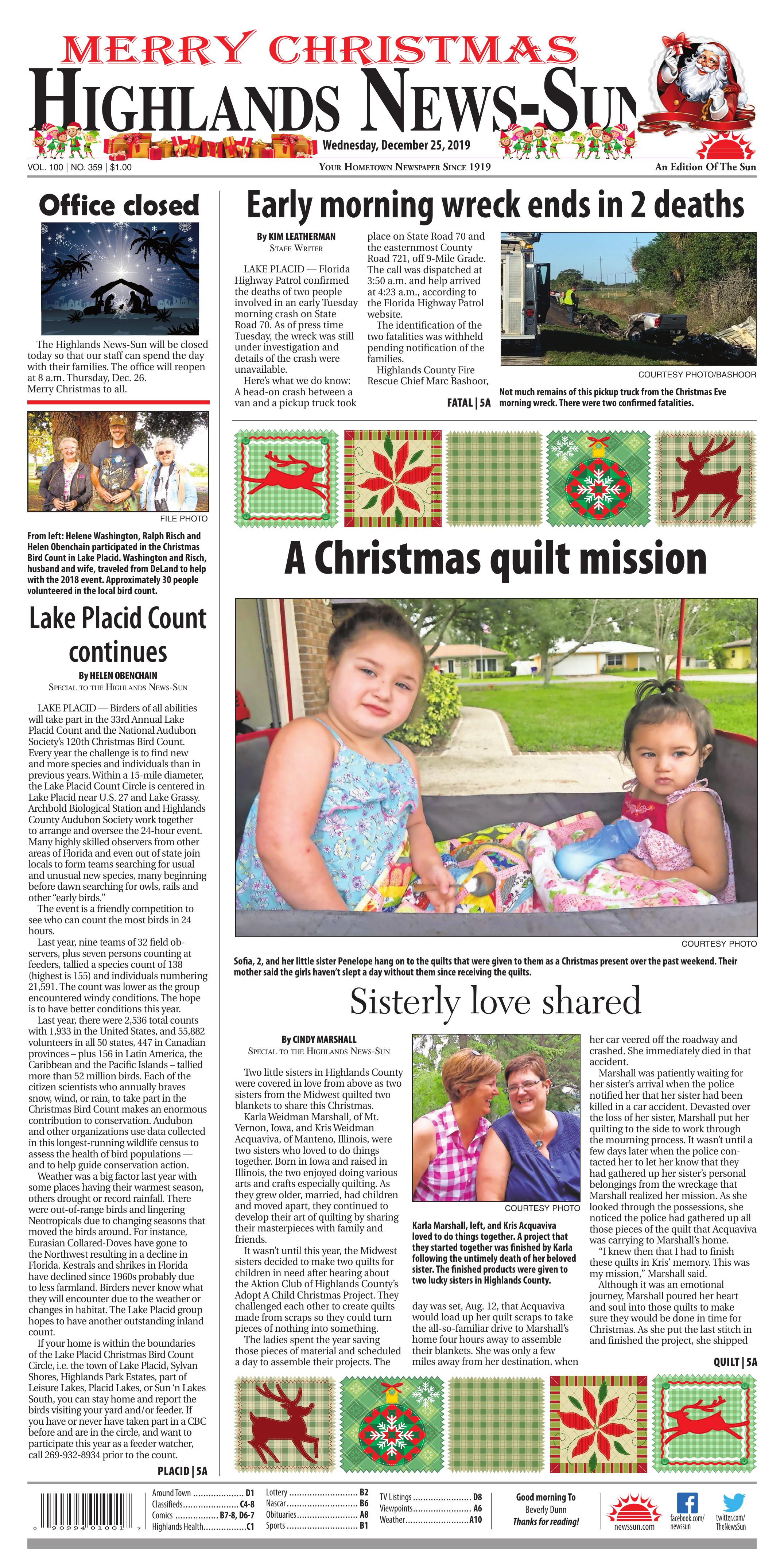