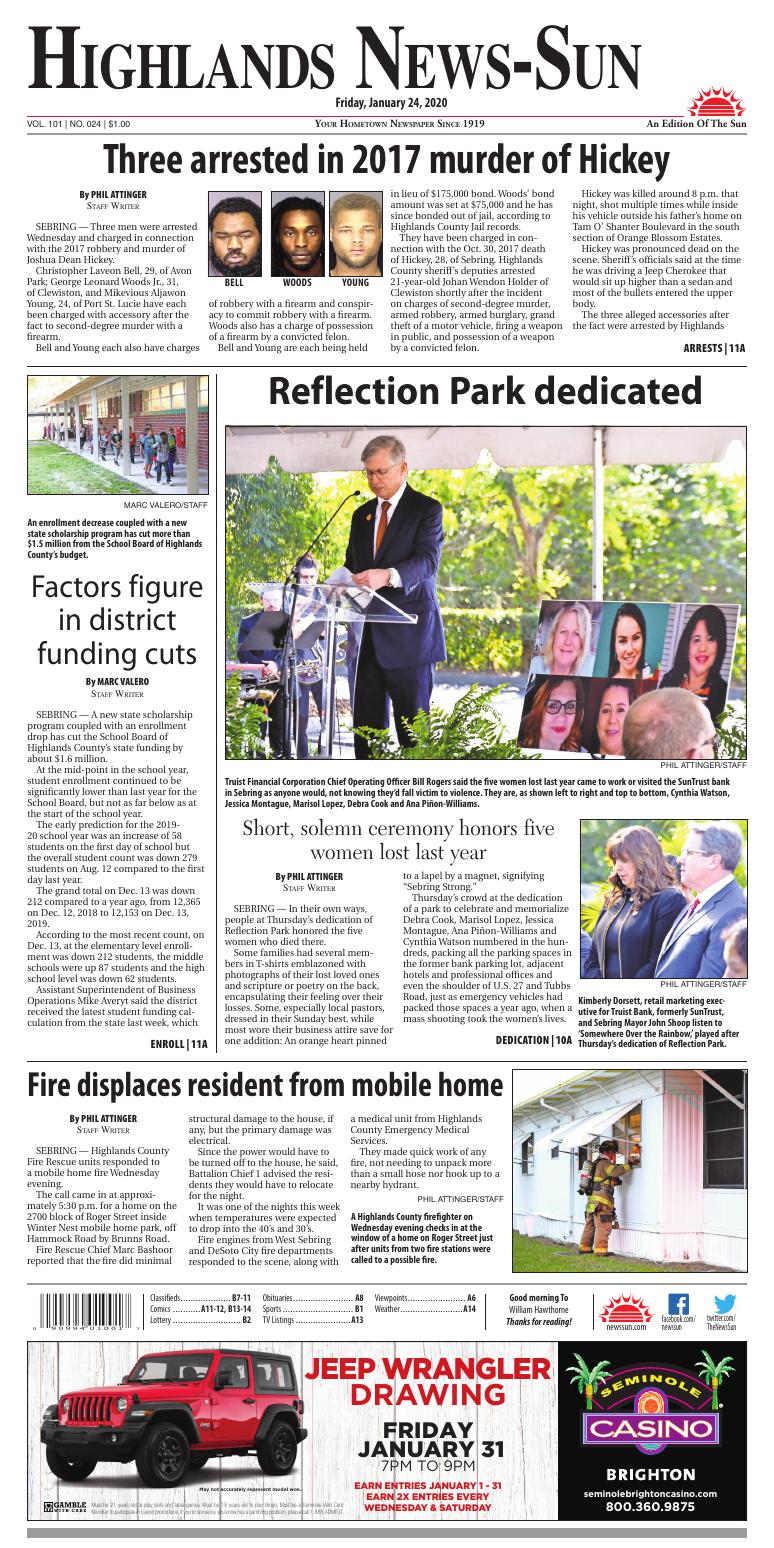 SEBRING — Three men were arrested Wednesday and charged in connection with the 2017 robbery and murder of Joshua Dean Hickey.

Christopher Laveon Bell, 29, of Avon Park; George Leonard Woods Jr., 31, of Clewiston, and Mikevious Aljawon Young, 24, of Port St. Lucie have each been charged with accessory after the fact to second-degree murder with a firearm.

Bell and Young are each being held in lieu of $175,000 bond. Woods’ bond amount was set at $75,000 and he has since bonded out of jail, according to Highlands County Jail records.

They have been charged in connection with the Oct. 30, 2017 death of Hickey, 28, of Sebring. Highlands County sheriff’s deputies arrested 21-year-old Johan Wendon Holder of Clewiston shortly after the incident on charges of second-degree murder, armed robbery, armed burglary, grand theft of a motor vehicle, firing a weapon in public, and possession of a weapon by a convicted felon.

Hickey was killed around 8 p.m. that night, shot multiple times while inside his vehicle outside his father’s home on Tam O’ Shanter Boulevard in the south section of Orange Blossom Estates.

Hickey was pronounced dead on the scene. Sheriff’s officials said at the time he was driving a Jeep Cherokee that would sit up higher than a sedan and most of the bullets entered the upper body.

The three alleged accessories after the fact were arrested by Highlands County deputies and the U.S. Marshals Service. Reportedly, the case has been taken over for prosecution by the Office of the Statewide Prosecutor in Fort Myers.

Bell also faces additional charges: drug possession and three counts of possession of a controlled substance without a prescription, based on a search of his mobile home that turned up a pill bottle with a label torn off that contained a variety of pills, as well as green leafy substance in multiple Baggies on the dining room table by the front door. It later weighed out as 80.2 grams, according to arrest affidavits.

The home was within 1,000 feet of public housing, reports said.

A family member at Thursday’s dedication of Reflection Park recites ‘Letter from Heaven,’ a poem told from the perspective of a departed loved one, giving reassurance to living relatives. It captured the sentiment of the day with many members of the families of five women, taken by violence a year ago at the SunTrust bank in Sebring, the site of which is now the public memorial park.

From left, Sebring Police Cmdr. Curtis Hart speaks with Detective Stephen Williams, who had the dual burden last year as both a responding officer to a mass shooting and a family member by marriage to one of the victims. He is shown here prior to Thursday’s dedication at Reflection Park in Sebring, prior to its dedication as a memorial to that event.

The saxophonist for the Jose Rojas Trio plays ‘Somewhere Over the Rainbow’ near the close of Thursday’s dedication of Reflection Park in Sebring.

A simple stamped metal plaque tells why Reflection Park exists and, respecting the privacy of families, mentions neither the names of the women killed nor who did it, but only the hope of people in Highlands County that they find peace in that place.

Proving yet again that the site of last year’s mass shooting at SunTrust bank can be a place for people to place flowers, cards and other remembrances, four ‘Banker’s Angels’ and one ‘Customer’s Angel’ lean against a palm tree near the entrance to Reflection Park, built on the footprint of that bank branch.

Jose Sanchez and Lydia Perez contemplate photos, out of frame, of five women killed in an act of violence a year ago at the former SunTrust bank, now transformed to Reflection Park, where Sanchez and Perez were Thursday. Perez said one of the women, Marisol Lopez, whom she knew from church, was ‘a perfect lady, a most wonderful person,’ as were all five.

Many paused to reflect on the tragedy a year ago that impacted five families and the community.

The large gathering prior to the Reflection Park dedication in memory of the SunTrust Bank branch victims.

After the formal Reflection Park dedication many paused to view the pentagon shaped memorial in memory of the five women who were killed a year ago in the SunTrust Bank tragedy.

SEBRING — In their own ways, people at Thursday’s dedication of Reflection Park honored the five women who died there.

Some families had several members in T-shirts emblazoned with photographs of their lost loved ones and scripture or poetry on the back, encapsulating their feeling over their losses. Some, especially local pastors, dressed in their Sunday best, while most wore their business attire save for one addition: An orange heart pinned to a lapel by a magnet, signifying “Sebring Strong.”

Thursday’s crowd at the dedication of a park to celebrate and memorialize Debra Cook, Marisol Lopez, Jessica Montague, Ana Piñon-Williams and Cynthia Watson numbered in the hundreds, packing all the parking spaces in the former bank parking lot, adjacent hotels and professional offices and even the shoulder of U.S. 27 and Tubbs Road, just as emergency vehicles had packed those spaces a year ago, when a mass shooting took the women’s lives.

Few words, if any, were spoken Thursday about the shooting, except by law enforcement officers in attendance, and only then in personal conversation.

Thursday was, instead, for the families and community to dedicate a place of peace and healing.

Prior to opening the ceremony, Mayor John Shoop told the Highlands News-Sun he found it eerie how he oversaw clearing of the site for the SunTrust branch that has been razed since the shooting for a memorial park.

The footprint is the same, he said, including the parking spaces.

“On this date, a year ago, we just had an unimaginable tragedy happen to us,” he said in his opening remarks. “It’s something that, you know, we know happens around the world, it happens around our country, but it doesn’t happen to us. And it happened to us.”

However, it didn’t break the community, he said.

He expressed pride in all the people who came together afterward to help bolster the community against despair.

“We’ve got a very strong faith in this community, and it’s shown, and that’s what we need to continue to do,” Shoop said. “This shows the rest of the world that, ... that there is unity out there, and it’s here. It’s with us. that’s something that we can give — out of a tragedy that’s happened — that we can give to the rest of the world to say, ‘Listen, we need to get our act together, as a country, as a ... nation, and work together and do good things, as what’s happened here.”

He gave thanks to members of the SunTrust Foundation, now under the name of Truist Financial Corporation. Members of that team were in Sebring immediately after the tragedy and for weeks afterward, attending to the needs of the families of victims, the company’s employees and the community.

Shoop invited people to visit the park in the future, to take time out of daily life to reflect on the people who are most important to us.

Truist Chief Operating Officer Bill Rogers, who also spoke, said the teammates in Sebring went to work on Jan. 23, 2019, to serve the community and their clients as they did every day.

“And their lives tragically ended in that service,” Rogers said. “We honor them today on behalf of over 50,000 teammates, now at Truist, who are doing the exact same thing today all across our company.”

He also thanked family members for coming to the dedication to honor and remember their loved ones.

“We’re going to honor and remember your loved ones, and this [park] is a manifestation of that,” Rogers said. “That will always be the case.”

He said the collective healing would be a long journey, and he committed to the families and community that “we’re all on that journey together, and we’ll be on that journey for a very, very long time.”

Rogers then thanked emergency responders who served their community in the midst of the tragedy last year.

He said he’s been moved to live a life of having more humility, hope and love each day.

Kimberly Dorsett, retail marketing executive for Truist Bank, closed the comments by telling about the outpouring of support shown in the past year.

“You, the Sebring community, immediately rallied to the sides of the families, each other, all of us,” Dorsett said.

A ground-swell of support went out early on, she said, with banners and logos of “Sebring Strong” all over town.

“Each of you were strong when we all needed it,” she said, adding thanks for José Sanchez for putting out Christmas trees and lights to honor the women and their families.

“We know that the deepest bonds are forged at the darkest times,” Dorsett said, noting that this happened for SunTrust/Truist and Sebring.

She then invited those present to enjoy a short performance by the José Rojas Trio playing a jazz version of “Somewhere Over the Rainbow.”

A Highlands County firefighter on Wednesday evening checks in at the window of a home on Roger Street just after units from two fire stations were called to a possible fire.

Highlands County firefighters stand by in Wednesday evening’s drizzle after a reported fire in a home on Roger Street in Sebring turned out to be a quickly-squelched electrical fire. The home was not seriously damaged, but was left unsafe for the night.

The call came in at approximately 5:30 p.m. for a home on the 2700 block of Roger Street inside Winter Nest mobile home park, off Hammock Road by Brunns Road.

Fire Rescue Chief Marc Bashoor reported that the fire did minimal structural damage to the house, if any, but the primary damage was electrical.

Since the power would have to be turned off to the house, he said, Battalion Chief 1 advised the residents they would have to relocate for the night.

It was one of the nights this week when temperatures were expected to drop into the 40’s and 30’s.

Fire engines from West Sebring and DeSoto City fire departments responded to the scene, along with a medical unit from Highlands County Emergency Medical Services.

They made quick work of any fire, not needing to unpack more than a small hose nor hook up to a nearby hydrant.

An enrollment decrease coupled with a new state scholarship program has cut more than $1.5 million from the School Board of Highlands County’s budget.

SEBRING — A new state scholarship program coupled with an enrollment drop has cut the School Board of Highlands County’s state funding by about $1.6 million.

At the mid-point in the school year, student enrollment continued to be significantly lower than last year for the School Board, but not as far below as at the start of the school year.

According to the most recent count, on Dec. 13, at the elementary level enrollment was down 212 students, the middle schools were up 87 students and the high school level was down 62 students.

Assistant Superintendent of Business Operations Mike Averyt said the district received the latest student funding calculation from the state last week, which showed the district was down 178 students.

“There was a new program that started this year that we really didn’t know how it was going to affect us,” he said. “That was the Family Empowerment Scholarship.”

The Family Empowerment Scholarship (FES) Program is for low-income and working-class families and middle-income families. It provides the opportunity for students to attend a private school.

There were 99 students in the district who received the empowerment scholarship. That cut the district’s funding by $571,000, Averyt said.

According to the Florida Department of Education, following the 2019 Legislative Session, Governor Ron DeSantis signed SB 7070, which created the FES Program to provide 18,000 students life-changing education opportunities for academic and career success. 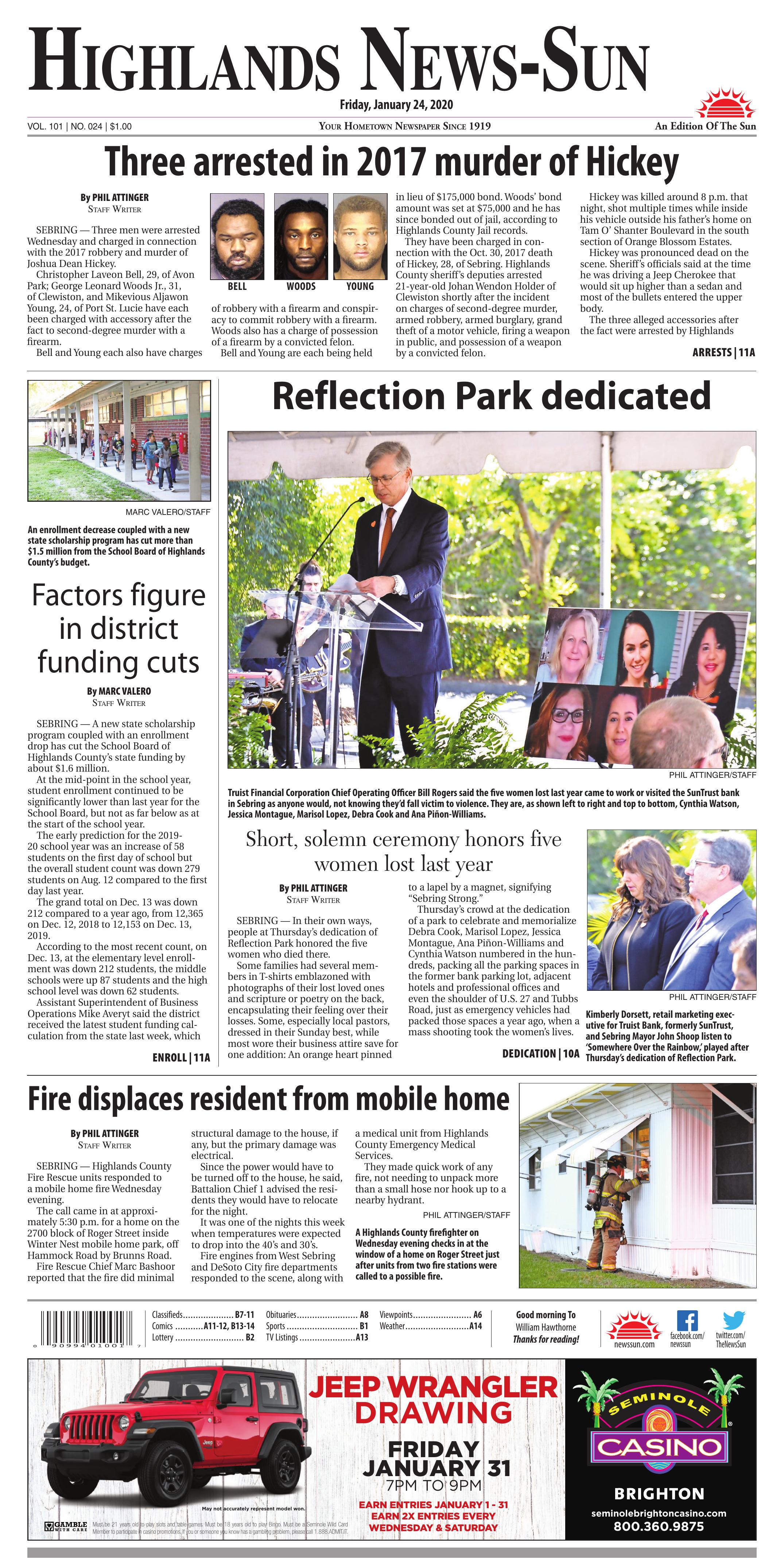