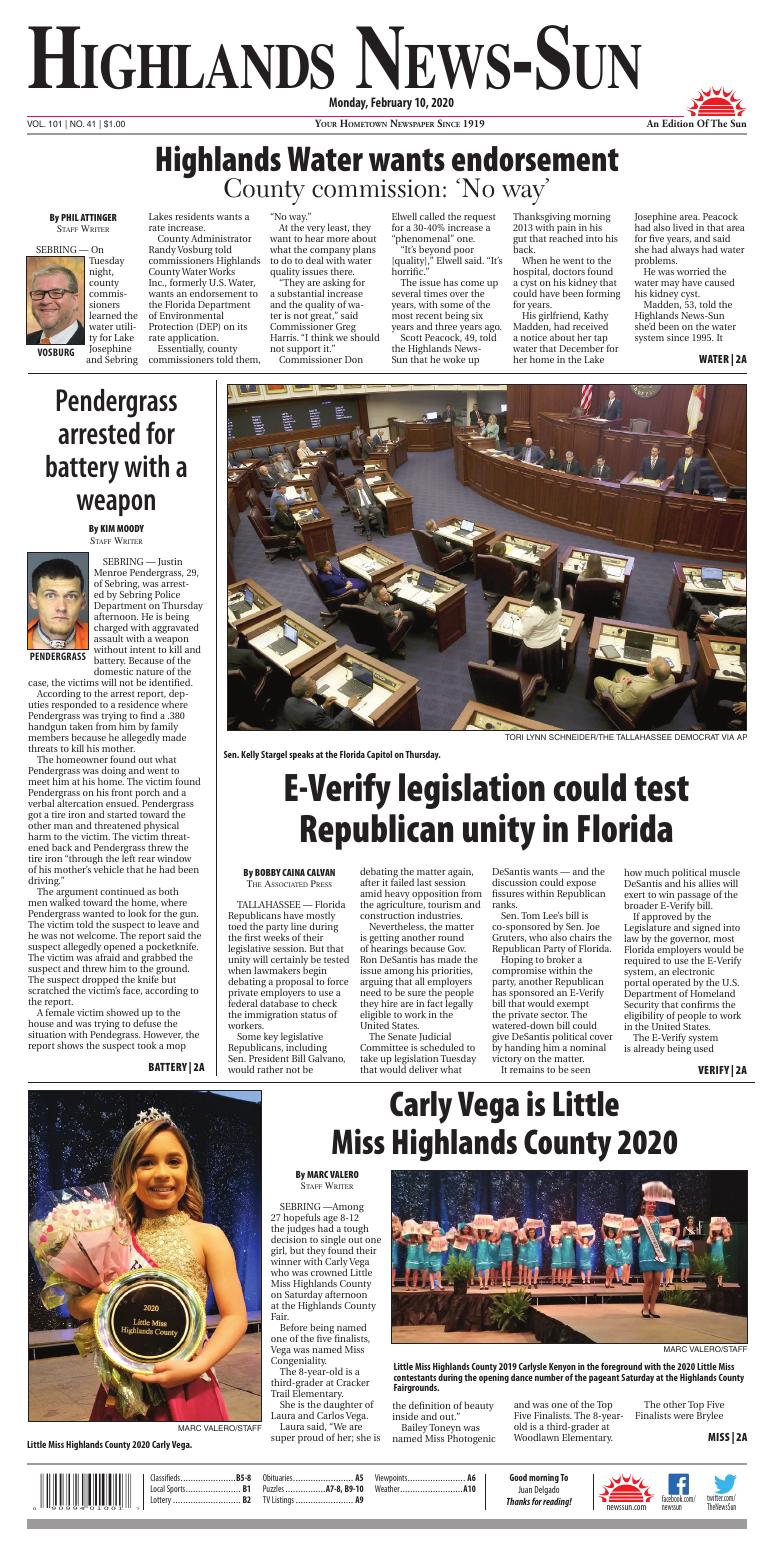 At the very least, they want to hear more about what the company plans to do to deal with water quality issues there.

“They are asking for a substantial increase and the quality of water is not great,” said Commissioner Greg Harris. “I think we should not support it.”

Commissioner Don Elwell called the request for a 30-40% increase a “phenomenal” one.

The issue has come up several times over the years, with some of the most recent being six years and three years ago.

Scott Peacock, 49, told the Highlands News-Sun that he woke up Thanksgiving morning 2013 with pain in his gut that reached into his back.

When he went to the hospital, doctors found a cyst on his kidney that could have been forming for years.

His girlfriend, Kathy Madden, had received a notice about her tap water that December for her home in the Lake Josephine area. Peacock had also lived in that area for five years, and said she had always had water problems.

He was worried the water may have caused his kidney cyst.

Madden, 53, told the Highlands News-Sun she’d been on the water system since 1995. It originally looked like lake water, until treatment cleared it up.

Ron Derossett, plant operator with U.S. Water Services Corp., which covers the Lake Josephine and Sebring Lakes areas, said at the time that the water had haloacetic acid, since aquifer water in that area is high in hydrogen sulfide.

Haloacetic acid forms when a naturally-occurring substance, like hydrogen sulfide, reacts with chlorine and chloramine, commonly used to disinfect water supplies, he said.

Derossett said at the time that the company was working with the DEP to fix the problem.

In May 2017, the county had to work to get U.S. Water Services to move its pipes out of the Lake Josephine Drive straightening and widening project.

At the time, the county commission agreed to support a state grant so water customers — paying $63 a month — wouldn’t face a $14 increase as the company looked to upgrade to an eight-inch line with fire hydrants.

In October 2017, U.S. Water was looking at another rate increase and still had water quality issues.

Anthony D’Angelo of Covered Bridge, another area served by U.S. Water, said his water tastes like chlorine, and it occasionally has an odor and color.

Company officials claimed the sulfur taste problem extended to the whole county. The company was proposing a $1.4 million repair which would include replacing an 8-inch water main and installing a filtration system to remove hydrogen sulfides from the water for Lake Josephine, Covered Bridge and Leisure Lakes customers.

The cost to customers at that time was estimated at an additional 40.5% on their water bills.

Sen. Kelly Stargel speaks at the Florida Capitol on Thursday.

TALLAHASSEE — Florida Republicans have mostly toed the party line during the first weeks of their legislative session. But that unity will certainly be tested when lawmakers begin debating a proposal to force private employers to use a federal database to check the immigration status of workers.

Some key legislative Republicans, including Sen. President Bill Galvano, would rather not be debating the matter again, after it failed last session amid heavy opposition from the agriculture, tourism and construction industries.

Nevertheless, the matter is getting another round of hearings because Gov. Ron DeSantis has made the issue among his priorities, arguing that all employers need to be sure the people they hire are in fact legally eligible to work in the United States.

The Senate Judicial Committee is scheduled to take up legislation Tuesday that would deliver what DeSantis wants — and the discussion could expose fissures within Republican ranks.

Hoping to broker a compromise within the party, another Republican has sponsored an E-Verify bill that would exempt the private sector. The watered-down bill could give DeSantis political cover by handing him a nominal victory on the matter.

It remains to be seen how much political muscle DeSantis and his allies will exert to win passage of the broader E-Verify bill.

If approved by the Legislature and signed into law by the governor, most Florida employers would be required to use the E-Verify system, an electronic portal operated by the U.S. Department of Homeland Security that confirms the eligibility of people to work in the United States.

The E-Verify system is already being used in Florida, albeit in a limited way. Former Gov. Rick Scott ordered all state agencies that were under his control to use the E-Verify system – a practice that continues under DeSantis.

Republican unity could also be tested during budget negotiations that must get underway in earnest so they can adjourn on March 13 as scheduled.

The Senate has proposed a budget of $92.8 billion — nearly $1.5 billion more than what the governor is requesting. The House is recommending a smidgen less than the governor’s $91.4 billion spending plan.

The House and Senate are both proposing to raise teacher salaries — as the governor has requested — and increasing pay for state workers, who are negotiating for a raise.

There are wide gaps in the spending priorities between the two chambers, including spending on housing programs and Florida Forever, the state’s land conservation program.

But there is likely to be little dissension over declaring the end of the telegraph era.

A measure repealing laws regulating the telegraph industry has sailed through committees and is scheduled to be taken up by the House floor Wednesday.

The Little Miss Highlands County 2020 contestants prior to the selection of the Top Five Finalists.

SEBRING —Among 27 hopefuls age 8-12 the judges had a tough decision to single out one girl, but they found their winner with Carly Vega who was crowned Little Miss Highlands County on Saturday afternoon at the Highlands County Fair.

Before being named one of the five finalists, Vega was named Miss Congeniality.

The 8-year-old is a third-grader at Cracker Trail Elementary.

She is the daughter of Laura and Carlos Vega.

Laura said, “We are super proud of her; she is the definition of beauty inside and out.”

Bailey Toneyn was named Miss Photogenic and was one of the Top Five Finalists. The 8-year-old is a third-grader at Woodlawn Elementary.

The other Top Five Finalists were Brylee King, Braelyn Cassill and Daxtyn Hines.

The 27 contestants were first introduced to the audience during a dance number in keeping with the Roaring 20s theme with some fancy and quick dance steps that take you back 100 years when the Charleston was the rage.

All dressed in blue short 20s-styled dresses with matching blue headbands, the girls where a hit with the audience as they danced to a recording that mixed a rippling low bass sound with a hint of 1920s inspired Dixieland.

The girls formed a circle in the conclusion of the performance, which brought a hearty applause from the audience.

After a break for entertainment, the contestants returned for the dress competition where they introduced themselves and thanked their sponsors.

The judging was based on poise, personality and overall appearance.

There were no runners-up named in the event. The others in the Top Five were known as “Sisters” to the winner.

SEBRING — Justin Menroe Pendergrass, 29, of Sebring, was arrested by Sebring Police Department on Thursday afternoon. He is being charged with aggravated assault with a weapon without intent to kill and battery. Because of the domestic nature of the case, the victims will not be identified.

According to the arrest report, deputies responded to a residence where Pendergrass was trying to find a .380 handgun taken from him by family members because he allegedly made threats to kill his mother.

The homeowner found out what Pendergrass was doing and went to meet him at his home. The victim found Pendergrass on his front porch and a verbal altercation ensued. Pendergrass got a tire iron and started toward the other man and threatened physical harm to the victim. The victim threatened back and Pendergrass threw the tire iron “through the left rear window of his mother’s vehicle that he had been driving.”

The argument continued as both men walked toward the home, where Pendergrass wanted to look for the gun. The victim told the suspect to leave and he was not welcome. The report said the suspect allegedly opened a pocketknife. The victim was afraid and grabbed the suspect and threw him to the ground. The suspect dropped the knife but scratched the victim’s face, according to the report.

A female victim showed up to the house and was trying to defuse the situation with Pendegrass. However, the report shows the suspect took a mop from the yard and started swinging the mop at her.

The first victim saw and tried to block any blows from the attack. He was struck in turn and received lacerations from the mop for it. Pendergrass left the area.

Later on, Pendegrass was spotted by the Sebring Police Department and a traffic stop was performed. The suspect fled and was tasered by the officer’s “Conducted Energy Weapon.”

After falling to the ground the report shows the suspect allegedly was arrested and a hypodermic needle with liquid, which would test positive for methamphetamine, on his person. 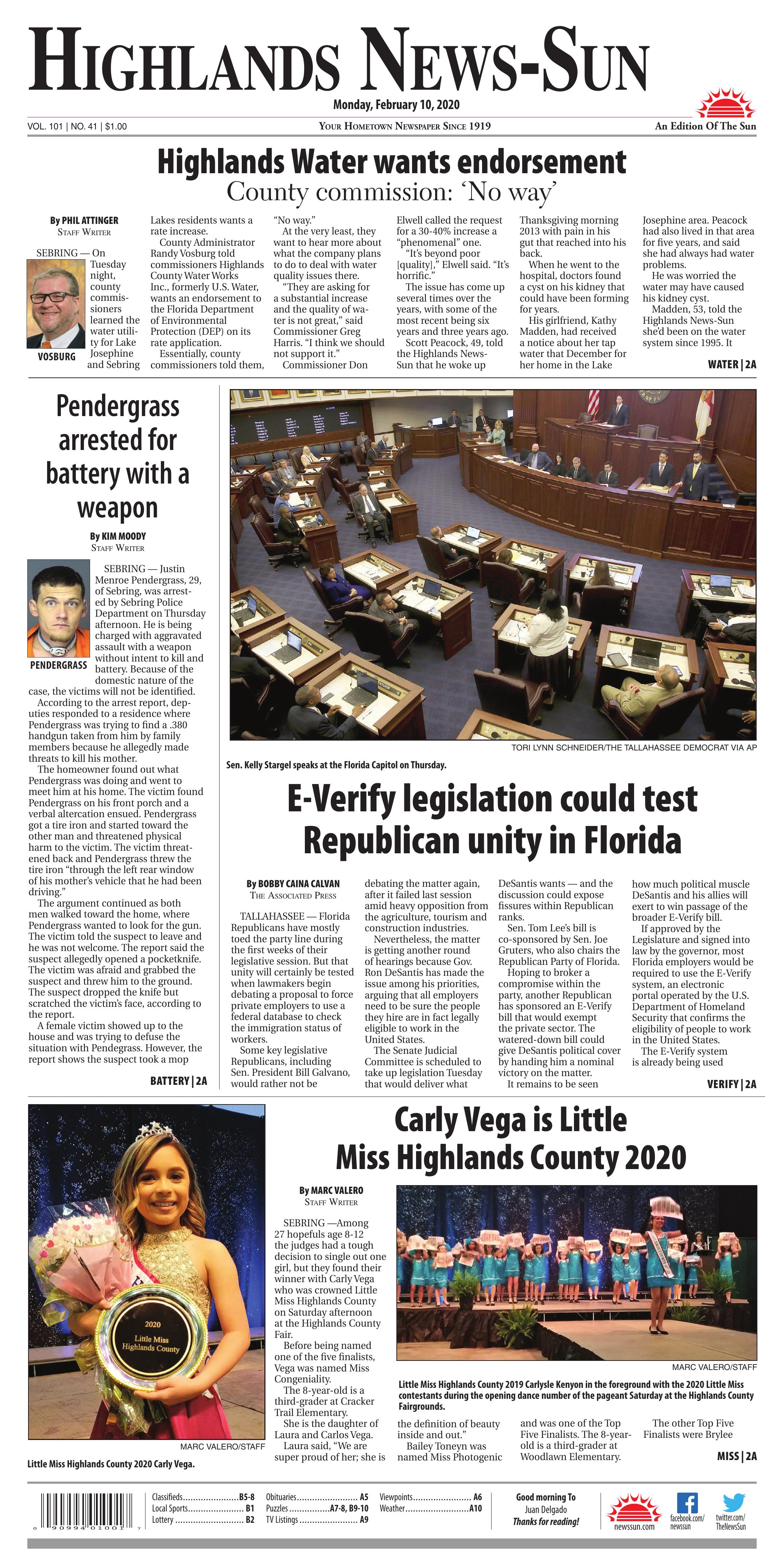